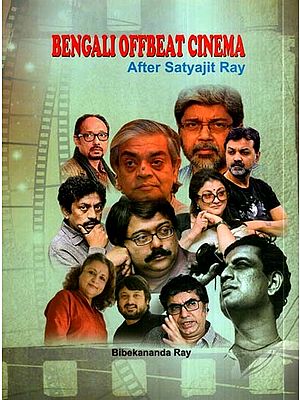 Satyajit Ray pioneered India's neo-realist cinema by directing 34 long and short features as well as five documentaries, 32 of them in Bengali. His debut in 1955, Pather Panchali ('The Song of the Road') blazed the trail of the genre in the country, became a global rave, subsequently, ranking among the ten best movies of all time, according to a 'Sight and Sound' poll. Did the genre that he pioneered and nourished for 36 long years end, or wilt after his death?

This title argues with ample data that on the contrary, the genre swelled further in the last 28 years with over 400 offbeat movies, made by younger generations charted new paths.

Tt was forty years ago that the word `off-beat' entered the lexicon of Indian cinema, Signalling a desperate effort to get away from the well-oiled idiom of popular cinema. The song and dance formula had taken a stranglehold with few exceptions like the work of Bimal Roy who died prematurely. His assistants, Hrishikesh Mukherjee and Basu Bhattacharya, had raised the banner of what came to be known as the "middle cinema" that spoke in soft, sentimental and restrained tones and found restricted outlets but was never at par with blockbusters shot on picture post-card locations. The superstars who appeared in the 'middle' films got a smell of realism and an opportunity to play characters somewhat closer to the soil. Only the uncompromisingly ‘off-beat’ cinema consciously discarded the conventions of extravagant escapism.

There were compelling reasons for this turn-around of events. It gave serious film-makers a route outside the established formula and audiences a choice beyond colourful potboilers. The new generation had emerged from film schools and institutions where such courses in film studies featured much like the universities in the West. This generation found openings in technical streams of big production houses that ruled Hindi cinema. Some of the technicians, especially cameramen and sound recordists with formal training, found rewarding careers. But there was no way in which those who had passed out from direction and screenplay writing courses with hopes of generating a serious awareness could penetrate the dream factory. The studios thrived on a flamboyant culture of their own reinforced by technical skills and mass hysteria revolving around stars like Amitabh Bachchan and Rajesh Khanna.

The "other" group looked beyond stars but, even if they did create spaces for popular faces, set up a parallel stream of what they claimed to be socially relevant work, they did not have much to write home. Fortunately, it was around this time that the government floated the Film Finance Corporation (FFC) to support those who had virtually no hopes of joining the mainstream. Thus was born the New Indian Cinema that sought to reflect social realities, spoke in a language that was closer to life, found regional inspirations and presented faces that were true to the characters they represented - all because it could get away from commercial pressures and rely on artistic devices that they cherished.

It was not long before critics invented the expression "off-beat" to identify the movement. While the discerning minority endorsed it as a healthy trend, the challenges were inescapable. The biggest challenge was to get away from the towering influence of Satyajit Ray. It was not just that Pather Panchali was virtually considered a text-book in film schools round the world and a reference point in all discussions on Indian cinema. The master had produced an electrifying range of classics that inevitably sat on the consciousness of anyone with a marginal interest in the medium - let alone the aspiring generation of film-makers. Whether it was Shyam Benegal, Gautam Ghose or Adoor Gopalakrishnan who confessed their indebtedness to the master without any hesitation or others who claimed to be unrelentingly reformist, echoes of the Ray classics were heard every now and then. Exponents of the "off-beat" thus had to get away from the crushing power of the industry and, simultaneously, the soft power of the master that the world had accepted as the only signature of Cinema India.