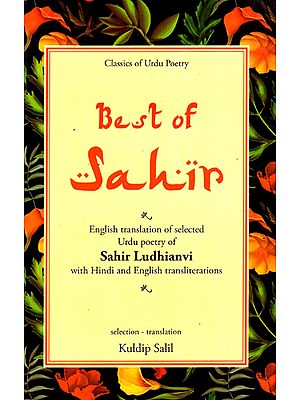 Sahir Ludhianvi can be called the poet with a "social conscience" as is evident from his poetry in which social concerns are often the dominant themes. Through his poetry he lamented the decline of morality in society, discrimination against women, futility of war, and attacked the rise of the self-appointed custodians of religion and power-hungry politicians. Born into a Muslim family on March 8, 1921, his real name was Abdul Hayee and Sahir Ludhianvi was his pen name. Sahir's childhood was marked by the separation of his parents and the unfair treatment of his mother. His first work, a collection of poems in Urdu, Talkhiyan, was published in 1945 when he was just 24 years old. He worked as a journalist and editor in Lahore, editing several Urdu magazines. In 1949 he moved to Mumbai, after the Pakistan government issued arrest warrants for him for making inflammatory and communal statements. Mumbai proved to be lucky for him as his poetic genius was discovered by the Hindi film industry. For three decades he wrote lyrics of Hindi film songs, forming successful partnerships with several music directors. His ego often came in the way of his ability to sustain long term professional relationships and he fell out with people over trivial matters. He died of a cardiac arrest on October 25, 1980 in Mumbai. Sahir Ludhianvi was honoured with the Padma Shri in 1971, and on his 92nd birthday a commemorative stamp was issued in his memory. 0 Best of Sahir offers an English translation of Sahir Ludhinavi's selected ghazals and nazms along with their transliterations in Hindi and English.

Kuldip Salil specialises in translating Urdu poetry into English and vice-versa. Commenting on his translation of Diwan-e-Ghalib into English, eminent critic and writer Khushwant Singh wrote, "I can say without hesitation, these renderings of Diwan-E-Ghalib' by Kuldip Salil read better than any I have read by scholars of Urdu, be they Indian, Pakistani or Firangi." He has published seven collections of his poetry including Bees Saal ka Safar, Awaaz ka Rishta , Dhoop ke Saaye Mein and Aaj ke Ghazalkar. His anthology of translated Urdu poetry, Treasury of Urdu Poetry, is extremely popular. He has also translated into English the Urdu poetry of Meer, Ghalib, Faiz, Faraz and Firaq.