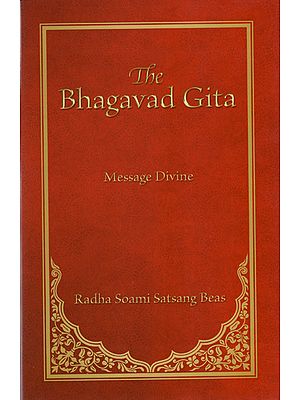 The Bhagavad Gita, which means ‘The Song of the Lord’ in English, is commonly known as the Gita. It is a dialogue between Lord Krishna and the warrior Arjuna. It consists of 700 verses divided into eighteen chapters and is a part of the great epic, the Mahabharata. At the heart of the Gita is the all-too-human quan- dary of its central character Arjuna, who, on the eve of the great battle of the Mahabharata, faces an existential dilemma: Should he fight with members of his own clan in order to combat a great evil or should he refrain from action because of family loyalty and aversion to conflict? Arjuna’s predicament is universal; whether the setting is as dire as the war of the Mahabharata or as mundane as bitter family strife or private personal crisis, we can all relate to such situations where our loyalties and attachments clash with the values we hold most dear to us. Krishna, the name given to the Lord, appears initially in the guise of Arjuna’s charioteer but later, as his mentor, Krishna explains the way out of the dilemma through his wise teachings. In doing so, Krishna dives deep into the purpose of human life and outlines three complementary or compatible paths to liberation of the soul — knowledge (Gyan Yoga), desireless action (Karma Yoga) and devotion (Bhakti Yoga) — which have become part of India’s precious spiritual heritage and continue to be a source of spiritual inspiration throughout the world.

The author of this book, Professor K.N. Upadhyaya, was Chair of the Department of Philosophy at the University of Hawaii, USA. He was greatly influenced by the great philosopher and statesman Sarvepalli Radhakrishnan (1888-1975). The translation of the Gita verses in this book largely matches Radhakrishnan’s classic version. Part One of the book provides a scholarly translation of the Bhagavad Gita, including Devanagari (Sanskrit) text and transliteration along with the English translation, and the author has elaborated the verses where ever needed. Part Two offers an interpretation of the Gita’s teachings.

Radha Soami Satsang Beas (RSSB), a spiritual society, exists to support seekers of spiritual truth through regular discourses held at its centres in India and abroad and also through its pub- lications on spiritual subjects. These activities of RSSB focus on the spirituality that forms the core of all religious endeavour and on the spiritual energy or divine power that is the source of the entire creation. The Society promotes the understanding that we all share the same divine source and that personal experience and realization of this Truth bring liberation of soul. As commu- nication around the world becomes easier and faster and people of different cultures and creeds find themselves living closer to one another, it is our sincere hope that this book will contribute to the understanding of the spiritual essence that links humanity and builds a universal fellowship. It is our great pleasure to pres- ent this book as a welcome addition to the RSSB "Mysticism in World Religions" series.

The Bhagavad Gita is perhaps the most influential and popular poetic work of Sanskrit literature dealing with morality and spirituality. It is basically a dialogue between Krishna, the well- known teacher, the very embodiment of divinity, and his disciple, Arjuna, a hero and a representative man of his age deeply beset with doubt, delusion and difficulty. The occasion of their dialogue also is a most crucial one when, at the critical juncture of the commencement of the great Mahabharata war, Arjuna is anguished and dismayed to see himself on the verge of shedding the blood of his own family members, relatives and respectable elders standing in the opposing army. Considering his action to be apparently incompatible with moral norms and spiritual ideals, he feels dejected and earnestly requests his teacher, Krishna, to guide him and help him determine the right course of conduct in light of the proper spiritual perspective. Krishna, who is truly divine in human form, is the only one perfectly suited to fathom the depth and immensity of Arujna’s difficulty, guide him along the right course, lift up his soul stage by stage and enable him to perform his duty and attain union with the Divine — the ultimate goal and the highest aspiration of human life.

The Gita has an assured place among the great scriptures of the world along with the Bible, the Koran, the Vedas, and others. But unlike them, it is not an independent work by itself. It is only a part of the great epic, the Mahabharata. Again, in the Gita, unlike in any other scripture, the divine message is imparted not in solitude or in peaceful surroundings, but amid the turbulence of the war when Arjuna, the seeker of the truth, is deeply perplexed to visualize the horror of the impending war.

Consisting of only 700 verses divided into eighteen chapters, the Gita constitutes chapters twenty-three to forty of the Bhishma Parva (the book of the warrior Bhishma) of the Mahabharata. The Mahabharata is the world’s longest epic poem, consisting of 100,000 verses. It is an ocean of spiritual wisdom and discipline, a resource of divine love and devotion and an insight into human character and ambition — all conveyed through prolonged and interrelated episodes and stories. It is said of this great epic that "whatever pertaining to righteousness, wealth, worldly happiness and salvation (the four objectives of human life) is found here (in this epic) is found elsewhere, but whatever is not found here is nowhere else to be found.’"" On the surface this statement may sound like a bit of an exaggeration, but on diving deep into the epic and getting a sense of its stories and its characters consisting of heroes, sages, saints and even divine incarnations, one may begin to see some plausibility in this claim. Although this epic is not an historical work, still it is supposed to be based on historical events of the time around the end of the Copper Age (Dvapara Yuga) when the Divinity descended to this earth in the form of Krishna.

The Gita constitutes the very heart of the Mahabharata. It encapsulates the chief moral and spiritual teachings of the Mahabharata, which lie strewn here and there all through its extensive text but are nowhere else so clearly and candidly articulated. The message that the Gita brings out is simple and succinct, yet sublime and profound. The method that it adopts to convey its message is a dialogue, which imparts a dramatic interest to the text and adds to its popularity. This dialogue is, by any measure, a momentous one in which the human disciple stands face to face with the divine teacher, an embodiment of infinite power, wisdom and love. Although the Gita is not formally reckoned as a revealed scrip- ture (shruti) and is considered as a part of the traditional wisdom (smriti), it claims to represent the essence of the Upanishads, which are regarded as the culmination of the wisdom of the revealed scriptures. As the popular verse of the Vaishnaviya Tantrasara beautifully puts it.

All the Upanishads are as it were cows; Krishna, the
cowherd’s son, is the milker; Arjuna is the calf; the
wise person is the drinker and the Gita is the great
immortalizing milk.

The author of the Gita clearly designates it as an Upanishad, as is indicated in its colophon.’

It is difficult to say who this author was because the entire corpus of early religious literature of India is anonymous. Early Indians seem to have been more interested in the thought than in the thinker. Hence, the authorship of early religio-spiritual liter- ature is attributed to the legendary figure, ‘Vyasa,’ which means ‘compiler.’ The entire Vedas, for example, are said to be the work of Veda Vyasa, that is, the compiler of the Vedas. Likewise, Krishna Dvaipayana Vyasa is mentioned as the poet author of the entire Mahabharata, including the Gita. ‘Krishna’ literally means ‘dark in complexion’ and dvaipayana means ‘one born on an island (dvipa).’ This derivation hardly provides any definite information about the author of the Gita or the Mahabharata. But, in any case, it is clear that the author of the Gita is a great sage who speaks with the fullness of his wisdom and love, awakens people to rise above the dejection of spirit and inspires them to seek the Truth and realize the unsurpassed sweetness of divine union. 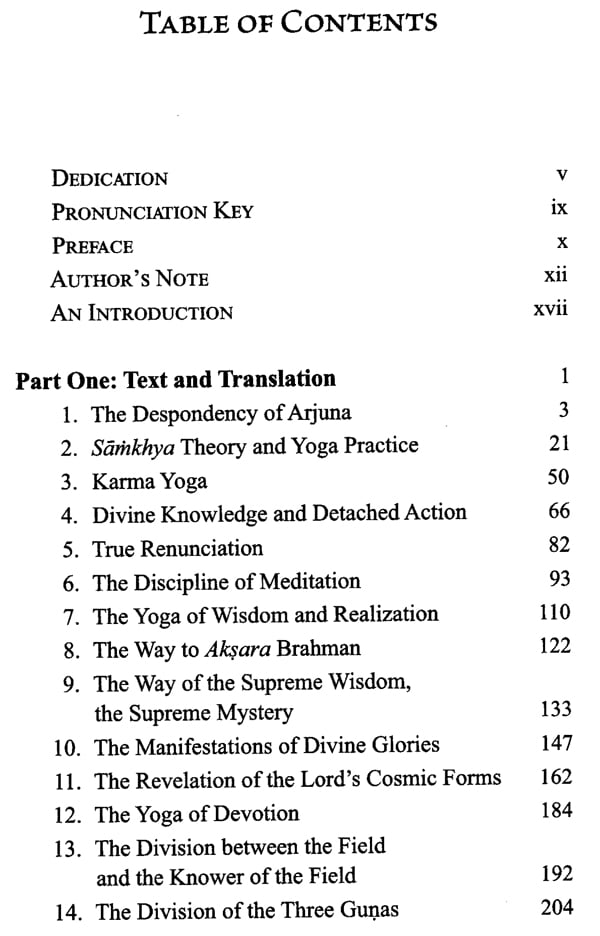 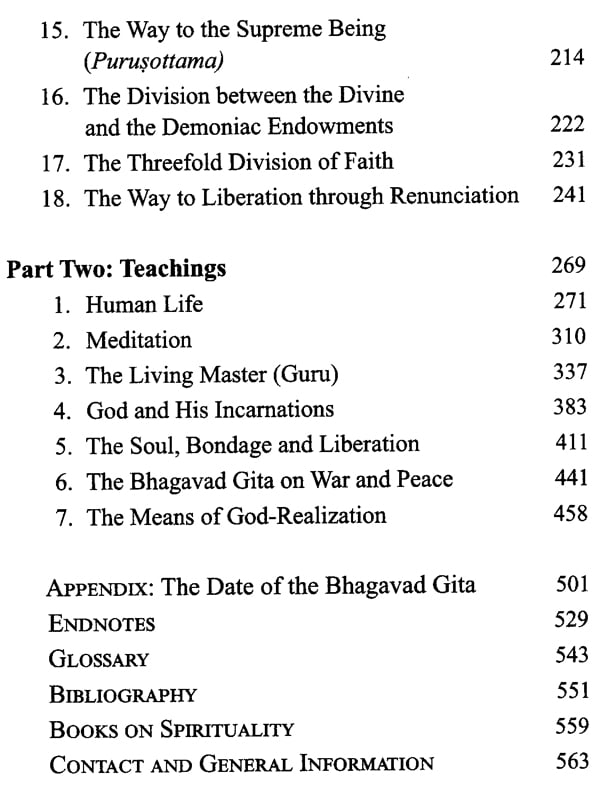 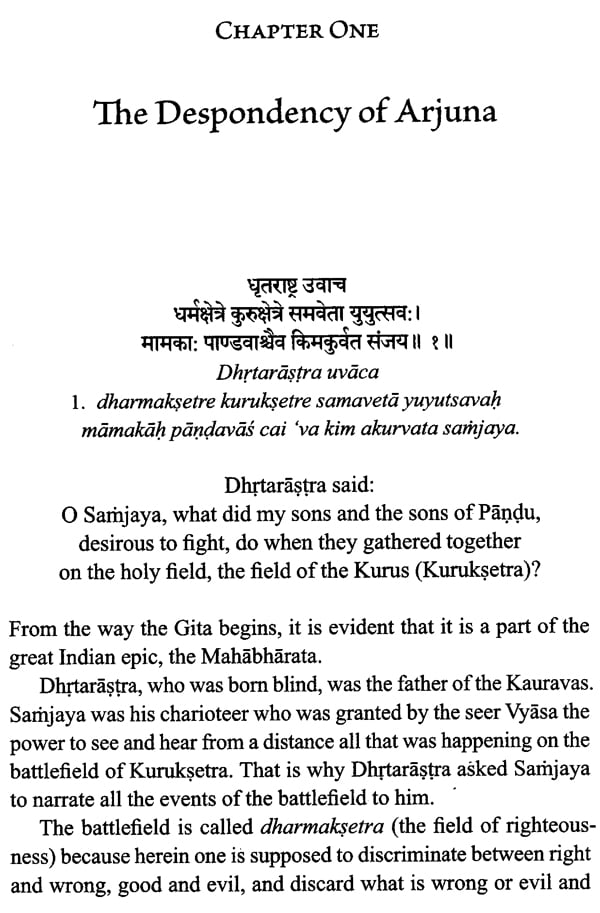 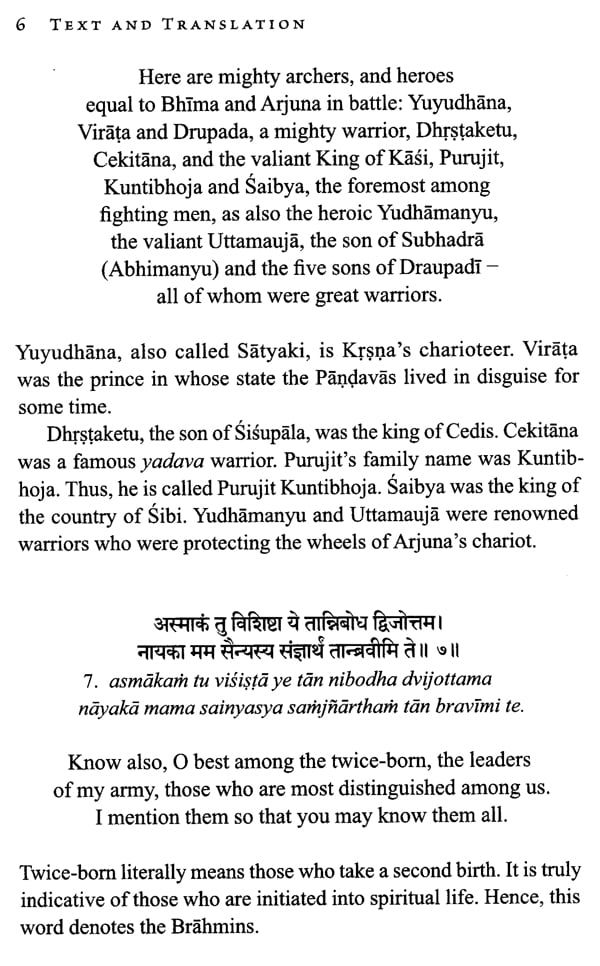 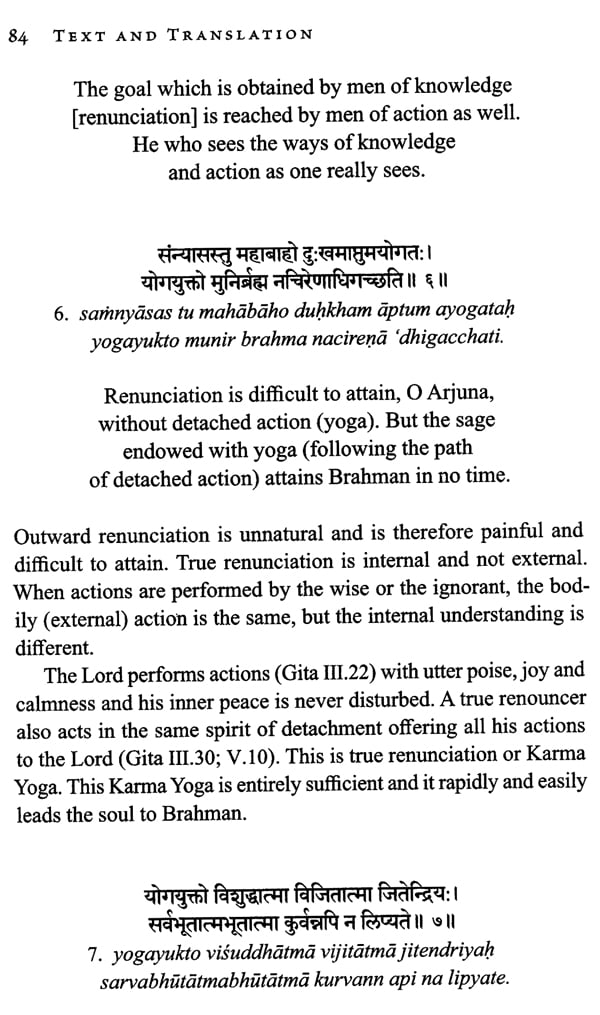 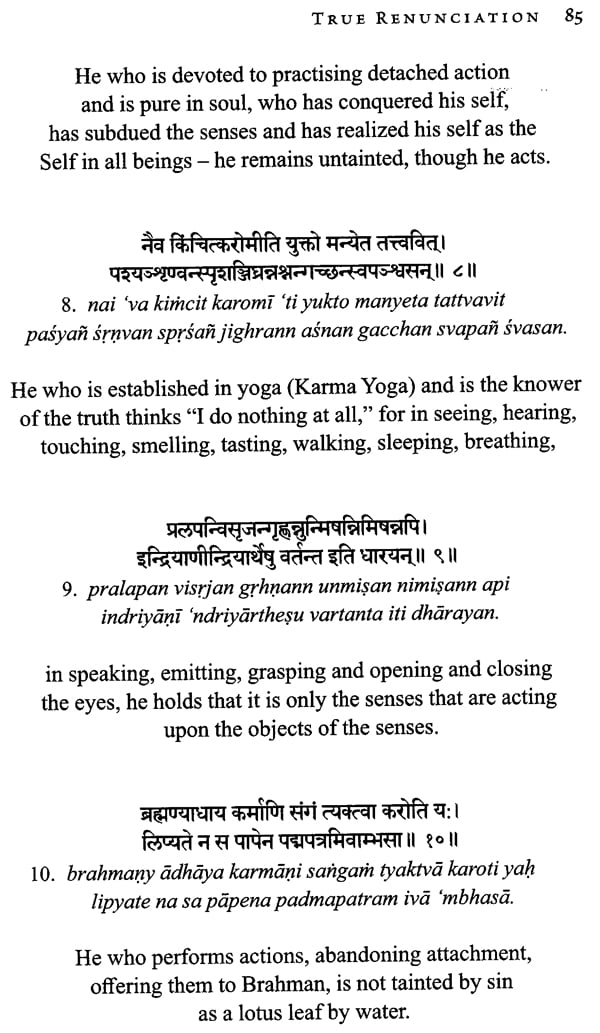 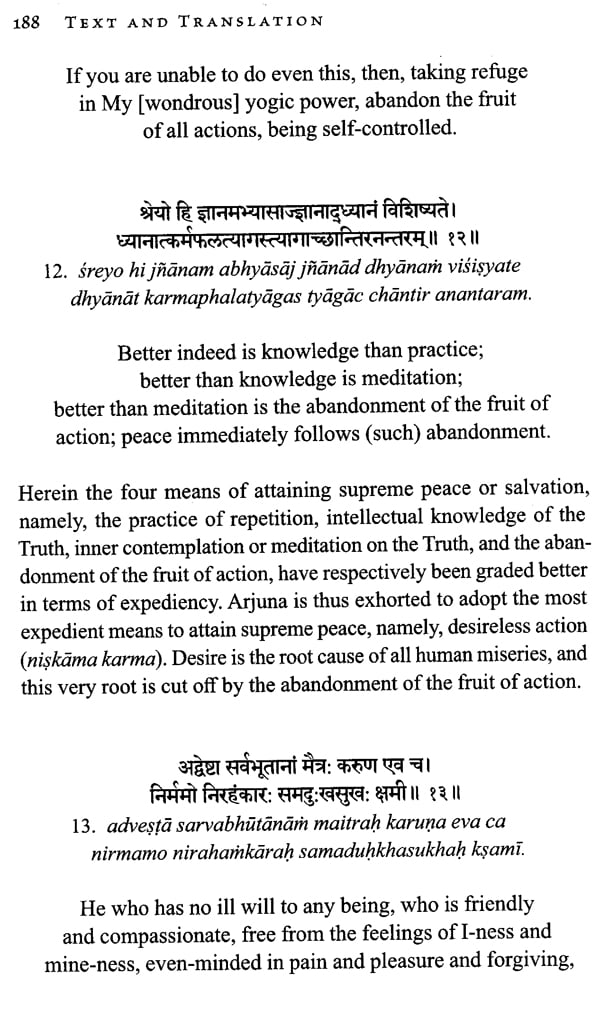 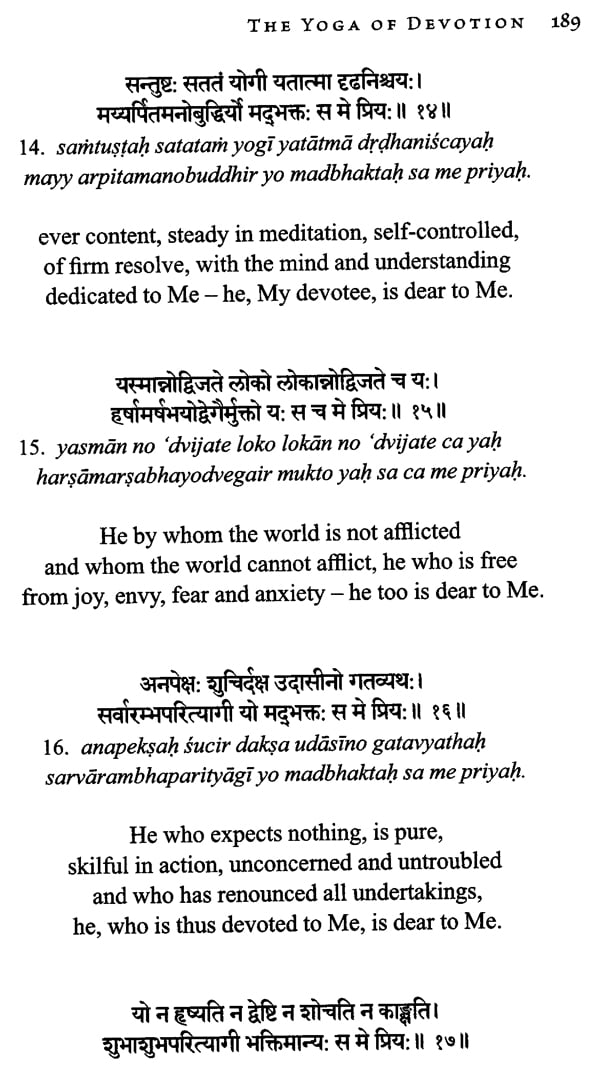 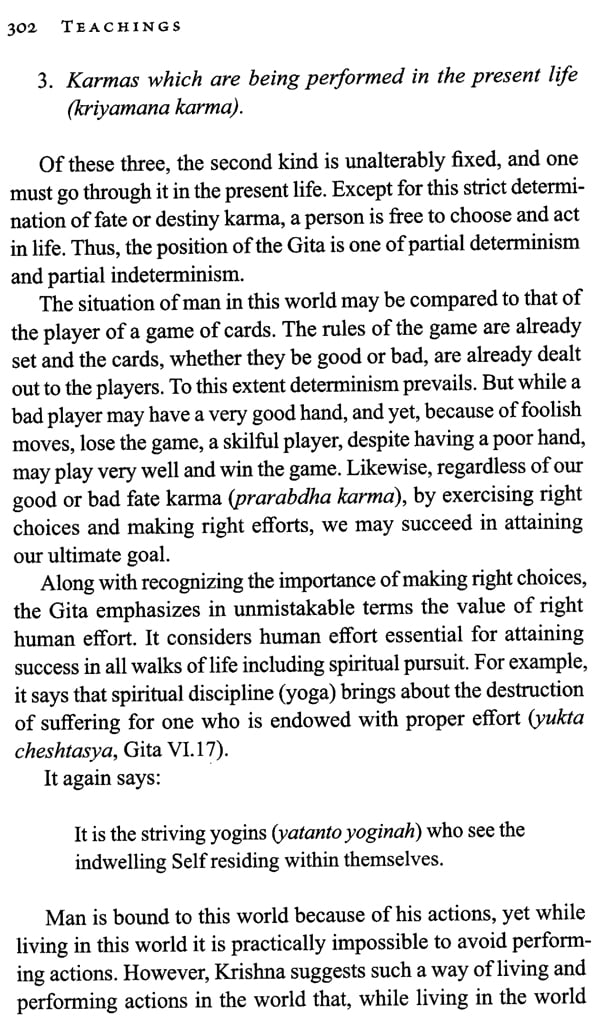 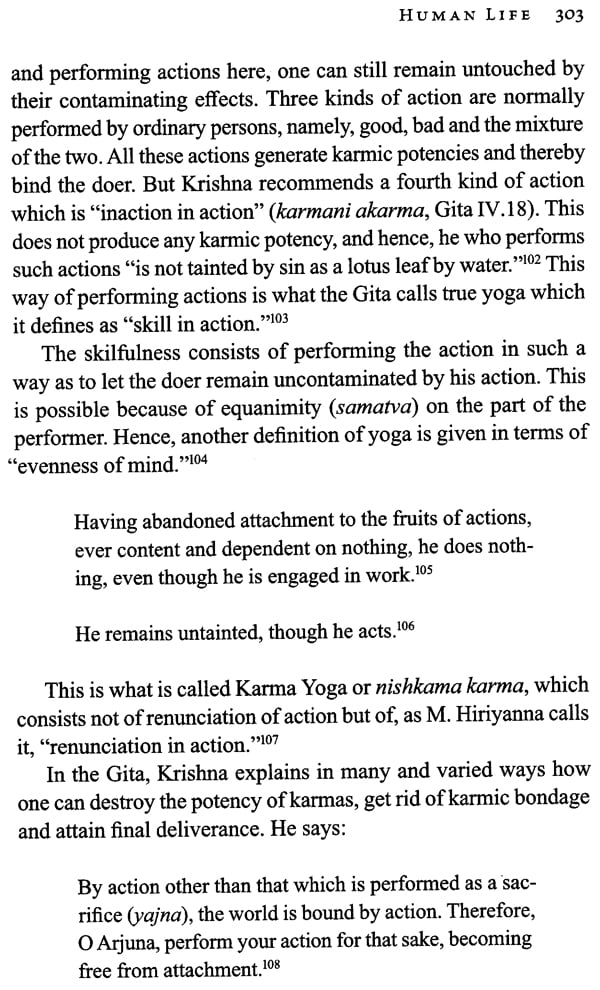 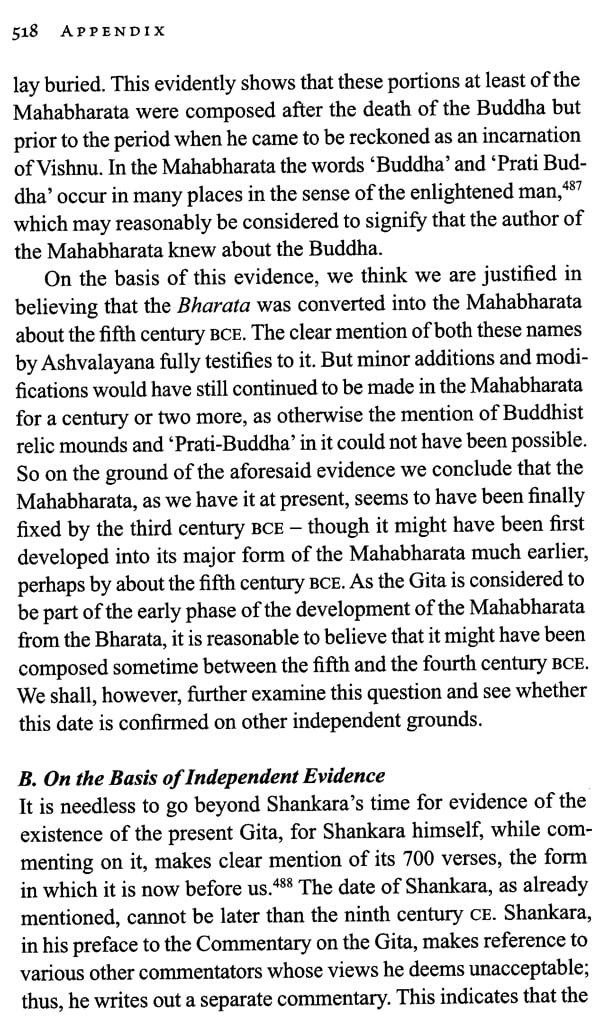 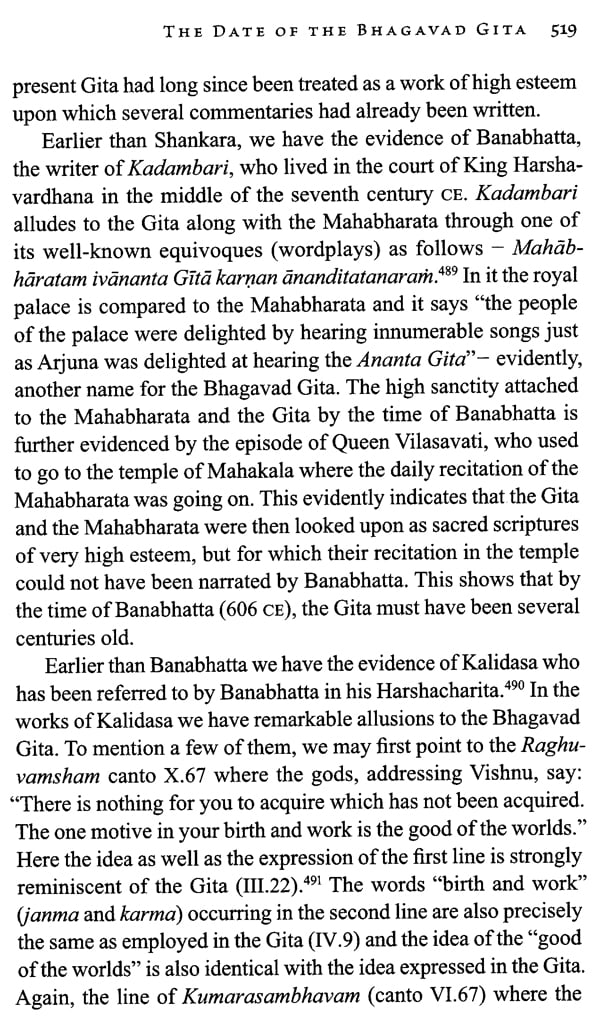 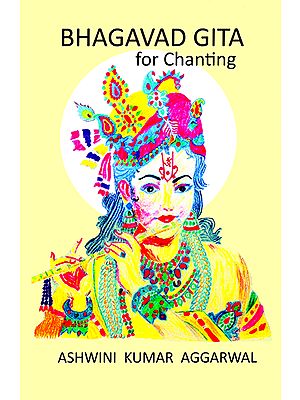 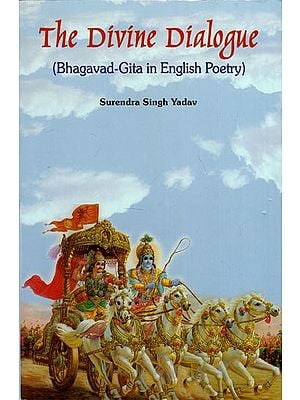 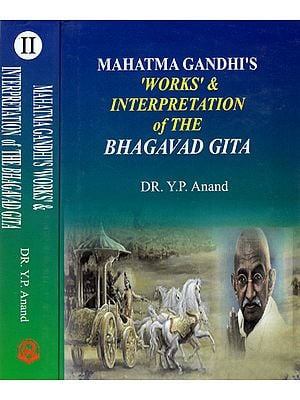 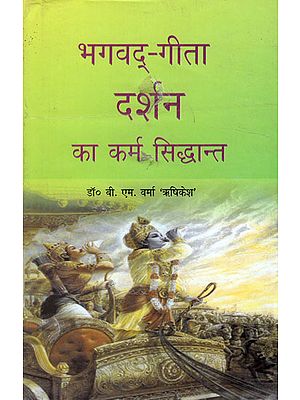 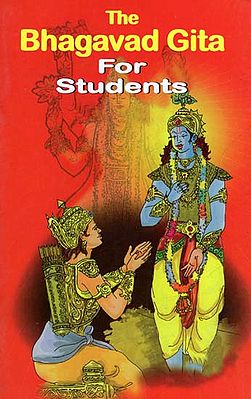 The Bhagavad Gita for Students
By K.K. Shanmukhan
$11 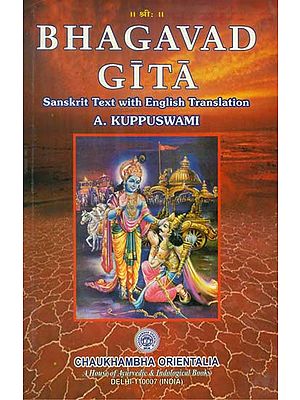 Bhagavad Gita (An Old Book)
By A. Kuppuswami
$33
FREE Delivery 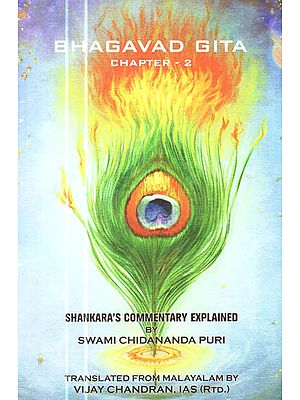