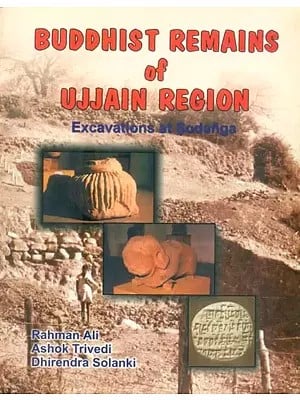 FREE Delivery
$48
$60
(20% off)
Quantity
Ships in 1-3 days
Notify me when this item is available
About the Book
The excavations conducted at village Sodanga (Distt. Ujjain, M.P.) have yielded important findings which are critically analyzed in the book. The First Chapter of the text is a brief back-drop of the historical background of the region beginning from the pre-Mauryan period onwards. It is followed by a brief note on the major aims and objectives.

Chapter Second focuses light upon the strata and structures revealed by the excavations. Chapter Third is the comprehensive study of varied types of potteries among which the finding of N.B.P. (Northern Black Polished Ware) of different shades, Coarse Black Ware, Lustrous Red-slipped Ware, Roman Sprinklers and the sherds engraved with the names of its owners etc. Chapter Fourth deals with the findings of the terra cotta objects in detail. Chapter Fifth is devoted to deal with the ornaments made of the metals and other objects discovered from the site.

The evidence substantiate that the site was once a flourishing Buddhist Centre for the most important findings of the Buddhist Creed on a terra cotta seal, broken component parts of the Asokan pillar, i.e., its lotus capital and the statue of the crowning animal elephant are noteworthy.

Thus, this Buddhist site enlightened us that, once it might have played important role in the history and culture of Ujjain region and India as a whole. Dr. Rahman Ali, Professor and Head, School of Studies in Ancient Indian History, Culture and Archaeology, Vikram University, Ujjain (M.P), has excavated the site of Sodanga (Dist. Ujjain) in 1989.

Dr. Ali has worked with Padma Bhushan (Late) Prof. H.D. Sankalia, Pune and has excavated jointly /independently various sites of M.P. and Maharashtra. Dr. Ashok Trivedi, Senior Reader in the department had been actively planning and directing the archaeological excavations and explorations work for the last 20 years. He has produced half- a-dozen Ph.D. students on various branches of archaeology. His rare research work on the Cultural History of Anupa Janapada is significant. He has published more than three dozens of research papers in various journals of National and International repute.

Dr. Dhirendra Solanki, Excavation-in- charge in the department, has done P.G. Diploma in Museology from Barakatullah University, Bhopal and Ph. D. in Archaeology from Vikram University, Ujjain. For last 15 years he had been looking after the work of excavations/ explorations conducted by the department. He has published more than two dozens of research papers and two books on different aspects of archaeology and history.

Foreword
During recent years the archaeological researches have advanced immensely. It has considerably enriched the writing of socio-religious and cultural history of our country. Ujjaiyini, having the glorious past, played a significant role in history and culture of the region and India as a whole. In this perspective our department had undertaken the project of excavation/ explorations of Ujjain region duly sanctioned by University Grants Commission, New Delhi. In the chain of archaeological excavations the historic site of Sodariga (Distt. Ujjain) was selected.

The excavations at Sodafiga have yielded astonishing results in bringing out the remains of the Buddhist stupa and other architectural remains like that of the Ashokan pillar-capital, the statue of the Mauryan elephant and other .important antiquities belonging to a long period of cultural activities at the site ranging from circa 600 B.C, to circa 700 A.D. and onwards.

A unique terracotta seal bearing the legend of Buddhist creed and the inscribed sherds of Northern Black Polished ware as well as a, good number / varieties of Roman sprinklers besides the Sungan terracottas etc. have proved that Sodafiga was a flourishing Buddhist center in ancient period which was, probably, destroyed by fierce fire as proved by the excavations.

Under the table direction of Prof. R. Ali and his young colleagues Dr. Ashok Trivedi, Reader and Dr. Dhirendra Solanki, Excavation-in- charge, have done a commendable work of excavations and writing of its detail report for which they deserve my laurels.

I hope much worth-while will be done by these colleagues of mine in future.

Introduction
It is well-known that in circa 600 B.C. the process of second urbanization was accelerated in north India due to the discovery of iron, Gradually, some of the important towns of north gained importance and became the centre of power and also the centre of trade and religious propagation. Ujjayini, the capital town of Avanti-Janapada did not lag behind in attracting the, people of all walks of life, as referred to in the epics, puranas as went as Buddhist and jaina literature. The cultural remains, and archaeological excavations, in the vicinity of Ujjayini, substantiate to "the fact.

Inspired by these evidences the authorities of Archaeological Survey of India conducted an archaeological excavation at famous Gadhkalika mound of Ujjayini near the river Kshipra in 1955. The result of excavations was fascinating throwing the flood of light upon the glorious past of Ujjayini. To add more we selected an unnoticed Buddhist site at village Sodafiga (Dist. Ujjain). It is situated at a distance of about eight kms.

from modern town of Ujjain on Ujjain-Unhel road.

Originally, it was a Buddhist establishment with a large stupa, monasteries and baolis etc. for the remains of which were traced and found during the course of excavations and explorations. Now the stupa is. occupied by the modern huts, but half of it is open which was partly excavated by us. Prior to our excavation it was noticed by late vs. Wakankar and Dr. S.S. Nigam of Ujjain.

The discovery of two component parts of the stone pillars viz. the elephant and lotus capital with Mauryan polish confirmed that probably the Mauryan king Ashoka erected the stone pillar over here looking to its importance but the shaft of the pillar is still missing.

However, excavations of the stupa revealed four phases of activities at the mound as follows:- Firstly, the activities were started during the pre-Maury an period which continued up to circa 200 B.C. We picked up the plain pottery with red wash and some sherds of the Northern Black Polished ware (N.B.P.); besides these the red ware and the Mauryan bricks were also collected. Further, the foundation of the stone wall was traced over red- murram.

In the second phase, ascribed to circa 200 B.C. to 75 A.D., the Sungan terracotta figurines, N.B.P. and Red-ware were found. It was the period of the Sunga, Kanva and the Satavahanas in this region as confirmed by the findings.

The most flourishing phase of the activities was the third phase i.e. ascribed to circa 76 A.D. to circa 300 A.D. During this period, the rulers of the region were the Kshatrapas and Satavahanas. It was during this period when w~' picked-up the sherds bearing the letters of Brahmi scripts.

The Red-ware of this phase are highly polished and thus they show the great affinity With the Roman-Samian wares. The Red-Polished spouted vessels of different varieties, punch-marked coins, seals, beads, inscribed seals, iron objects etc. are found in abundance. Obviously, the site had its glorious period as confirmed by these evidences.

The fourth phase has been ascribed to circa 300 A.D. to circa 600 A.D. when the Gupta, Aulikaras and lastly the Hunas had influence over the activities. The red-polished ware, N.B.P. sherds, iron objects, shell objects have been found. Beside these findings, a thick lay r f ash f b It 0 centimeters was traced in two trenches confirming the site to be destroyed by severe fire.

Thus, five trenches measuring 5 x 5 meters were laid down on the southern part of the stupa. To begin with Trench SDG. I which was laid on the top of the mound, we noticed that the stupa was built by converting the hillock and the hemispherical shape of the stupa was made by box- heads and a wall was created in the middle of the hillock. The wall was build with the boulders, dressed stones, brick-bats etc. paved in the red murram with 01 meter foundation and more than 1 meter in height around the stupa like girdle.