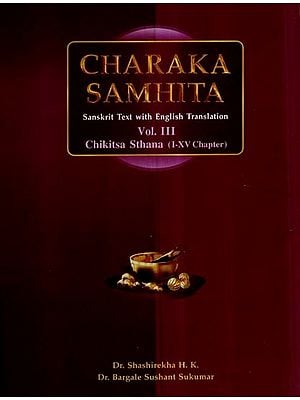 We feel extremely happy to bring you "Charaka Samhita" the text with English translation. The book is unique of its kind as if is conceived as per the needs of B.A.M.S. Graduates, beginners of Ayurveda as well as allied subject seekers. We have attempted to bring before you the best treatise of Ayurveda of Agnivesha in very simple and easy English along with relevant explanations from commentaries wherever necessary.

We are thankful to our dearest students community for over whelming response for our earlier "Text book of Swasthavritta" and hope to receive the similar encouragement for this endeavor also.

Dr. Bargale Sushaot Sukumar, Born in Sangli, Maharsahtra. He has completed Graduation (2006) and Post Graduation in Swasthavritta (2010) and Pursuing Ph. D. in Ayurveda (Swasthavritta) from Rajiv Gandhi University of Health Science, Bangalore, Karnataka. He has completed M. Se, (Yoga) from Periyar University (PRIDE), Salem, Tamil Nadu and M. Sc. (psychology) from Madurai Kamaraj University, Madurai, Tamil Nadu. Currently he is working as Assistant Professor in the Department of Swasthavtitta and Yoga at Sri. Dharmasthala Manjunatheshwara College of Ayurveda and Hospital Hassan, Karnataka. He has published many articles in National and International Peer reviewed journals and presented more than 8 papers in various International and National conferences.

The section Chikitsa Sthana contains 4904 Sutra and 30 chapters, the detail description of various diseases and their principles of treatment along with description of Rasayana and Vajikarana are available. Charaka Samhita being primarily a treatise of Kaya Chikitsa(medicine),most of the chapters in the Chikitsa Sthana deal with Kaya Chikitsa while 23rd chapter on the Visha Chikitsa (management of poisoning) deals with AgadaTantra (toxicology) and 25th chapter relates to Shalya (surgical disorders). In Ayurveda, Manasika Roga (psychiatry) is dealt with under the heading of BhutaVidya and two chapters 9th deal with Unmada Chikitsa and 10th deal with Apasmara Chikitsa focus on this aspect of medicine. Finally, the 30th chapter describes miscellaneous matters including the Stri Roga (gynecological disorders), Shukra Roga (male infertility) and Bala Roga (pediatrics) thus fulfills Astanga Ayurveda.

Swasthasya Swastha Rakshana Aturasya Vihara Prashamana- The main aim of Ayurveda is presentation and treatment of the diseases. Chikitsa in Sanskrit means treatment and this section is about therapeutics in Ayurveda the first two chapters Rasayana and Vajikarana deal with the preservation and promotion of physical, mental and sexual health of healthy person and the remaining chapters deal with therapeutics for the cure of diseases.

Charaka Chikitsa Sthana deal with complete management and maintenance of health, thus fulfills most of the connotation of Astanga Ayurveda. In therapeutic chapters a general pattern is adopted to describe the managementeach chapter provides a brief Nidana, Purvarupa, Rupa, Samprapti, Classification, Sadhya Asadhyata of the disease explaining the Chikitsa Sutra and Chikitsa. The first principle of treatment (Chikitsa Sutra) of that particular disease is given in terms of Langhana or Brumhana, Snehana or Rukshana, Swedana or Stambhana and concerned measures of Shodhana followed by their judicious use in particular state and stage of the disease. It is followed by description of single or compound preparations along with their ingredients, method of preparation, Dosage, mode of administration and indications. The drugs are mentioned in the form of fresh juice and paste, powder, tablet, decoctions, Avaleha, Asava, Arishta, Ghrita and Taila.

Eight groups of major diseases were described in Nidana Sthana, each representing specific methodology related with diagnostic aspect. Management of those eight diseases is explained in detail from the third to the tenth chapter in Chikitsa Sthana.

Rasayana Adhyaya (Ist chapter) - The first chapter is on Rasayana Adhyaya (rejuvenation therapy), further divided into four Pada (sections). The chapter describes a number of drugs and preparations by means of which one can prevent and retard aging and live a longer, happier life. Rasayana drugs promote physical and mental health and provide general immunity to prevent diseases as well as strength to the tissues to be able to fight diseases effectively.

Jwara Chikitsa Adhyaya (3rd chapter) - In Jwara Chikitsa chapter focused on the disease fever, the disease sequence followed as like Nidana Sthanaof Charaka Samhita. The Jwara gets manifested because of the involvement of Rasa Dhatu, Agni, Ama and mainly Pitta Dosha. Jwara Chikitsa includes therapeutic measures for acute and chronic fever, continuous, intermittent, malarial and seasonal fevers, mild, moderate and severe fevers, fever with or without Ama, fevers occurring from one, two or three combination of Dosha, fever occurring in Dhatu and so on. All the aspects affecting treatment and prognosis of various types of fever are also described.

Rakta Pitta Chikitsa Adhyaya (4th chapter) - The fourth chapter deals with the Raktapitta Chikitsa (management of bleeding disorders) which is of two types i.e. bleeding from the Urdhwa (upper) and Adho (lower) channels.

Unmada Chikitsa Adhyaya (9th chapter) - In this chapter describes causes, types clinical and management of Nija and Agantuja Unmada. The specific about the Agantuja (Bhutaja Unmada) along with its types were elaborated in detail.

Kshata Kshina Chikitsa Adhyaya (11th chapter)- The eleventh chapter describes Kshata Kshina occurs by indulgence in activities beyond individual get strength or cruel activities such as bull fighting leading to ulcer in chest, bleeding, cachexia and its management. Here mainly the disease symptoms gets manifested by the involvement of depletion of Dhatu.

Udara Chikitsa Adhyaya (13th chapter) - In Udara Roga the conditions leading to generalized enlargement of abdomen because of Vatadi Dosha, enlargement of internal organ like spleen, liver etc. this chapter also about collection of fluid (ascites).

Grahani Dosha Chikitsa Adhyaya (15th chapter) - In the Grahani Dosha (Agni Dosha) and its management is explained. Various stages and processes of digestion, metabolism leading to the formation of Dhatu and Mala are described types of Agni, its normal function and its prognosis as well as management, significance in disease manifestation were explained as an illustration the chapter explained Grahani Roga types and its management of Grahani chapter also explained the management of Mandagni and Atyagni (Bhasmaka Roga).

Hikka Chikitsa Adhyaya (17th chapter) - In Hikka Shwasa Chikitsa described about five types of disorders having presentation of Shwasa (dyspnea) along with five types of Hikka (hiccough) and its management.

Samprapti, Lakshana and its management of Atisara (diarrheal disorders). 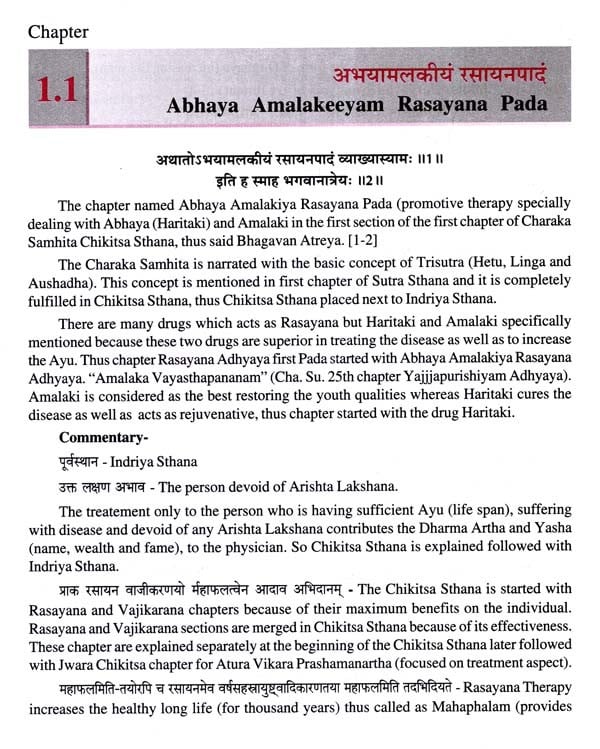 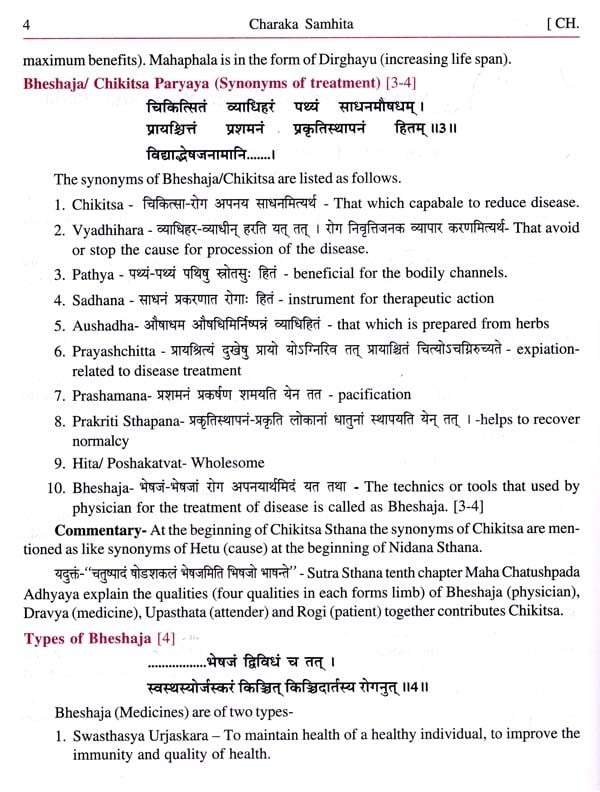 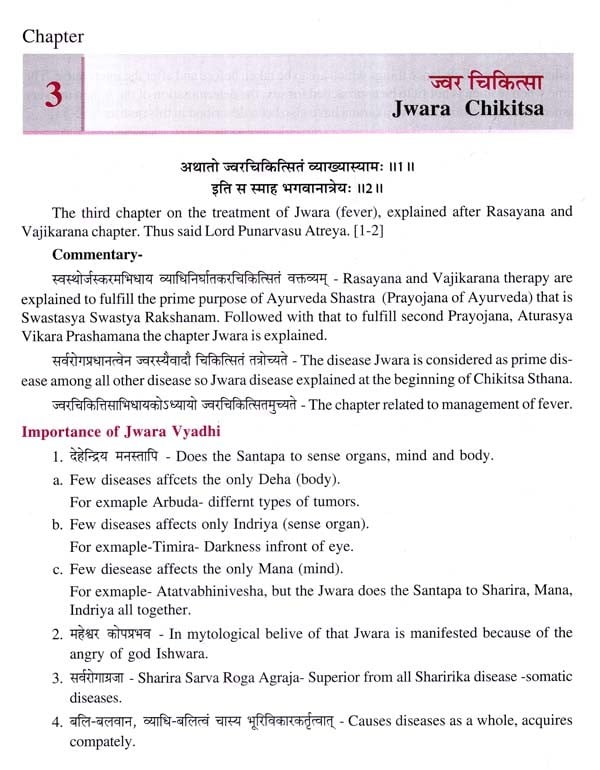 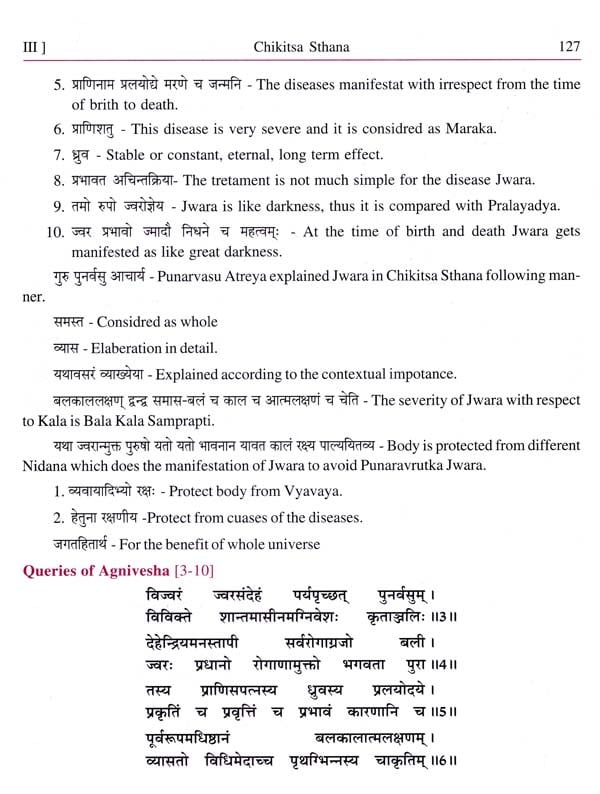 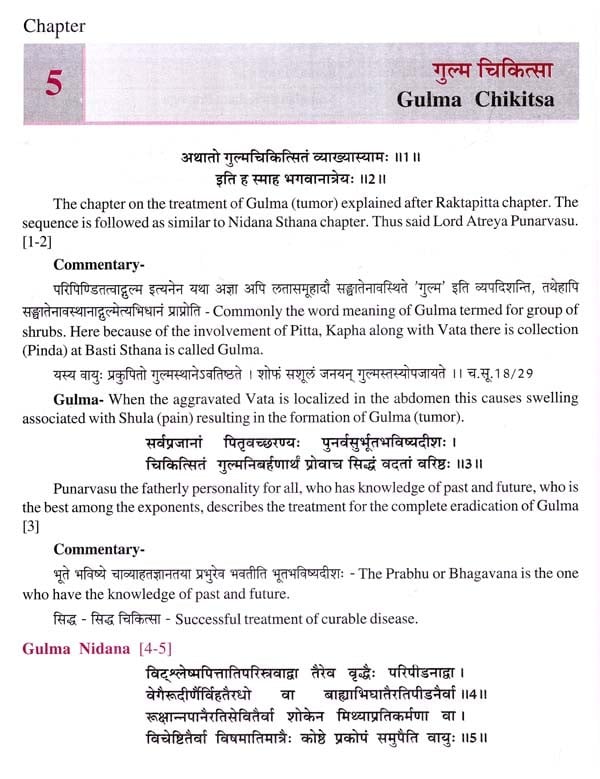 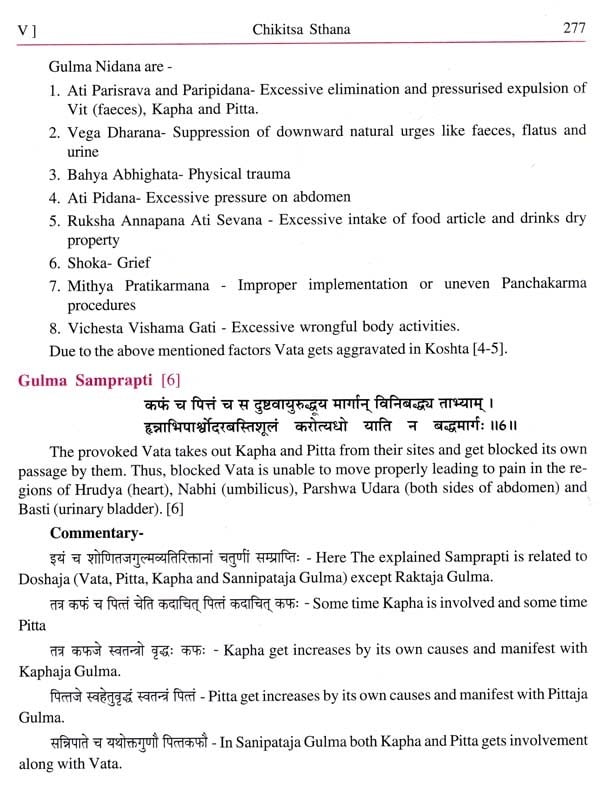 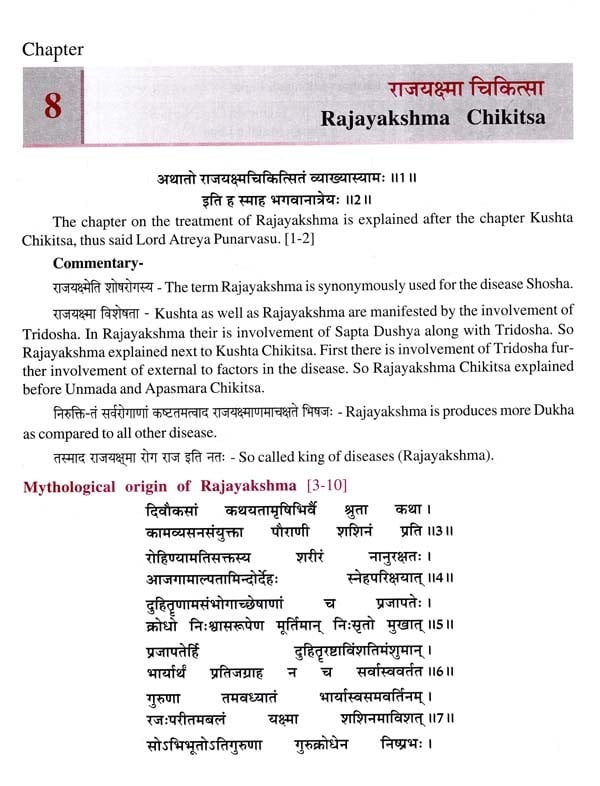 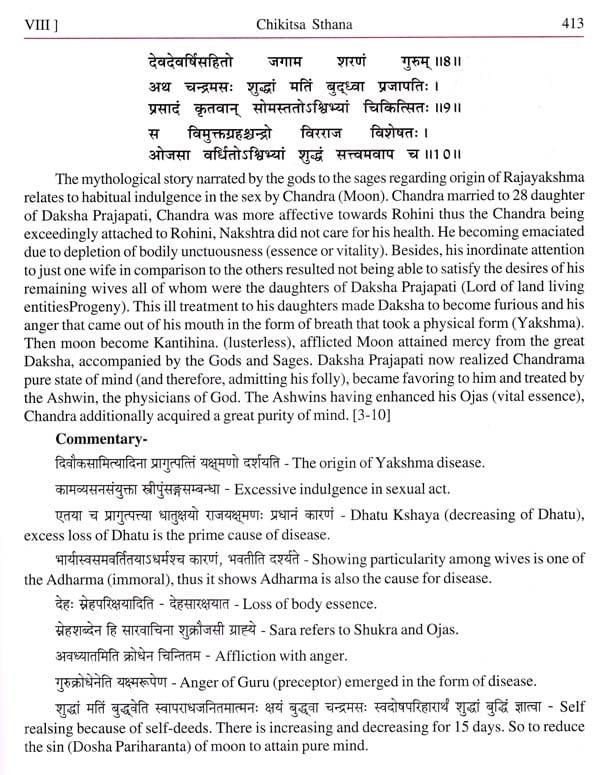 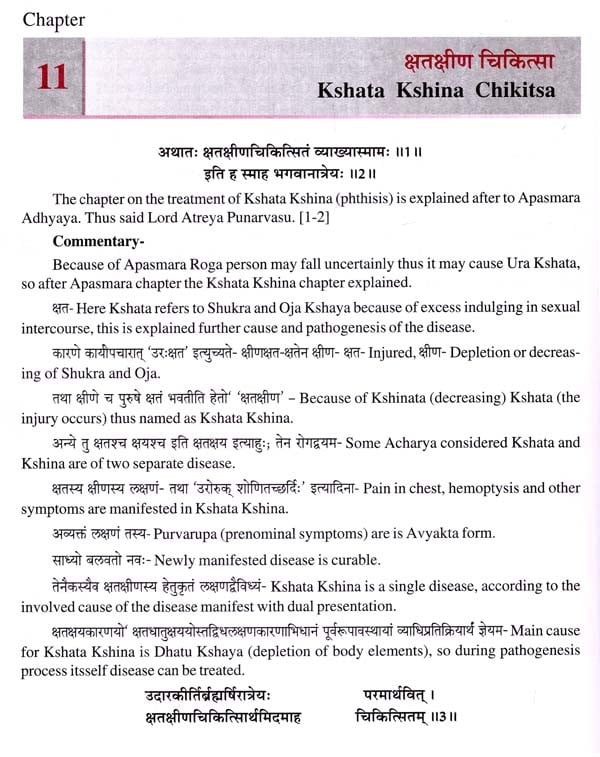 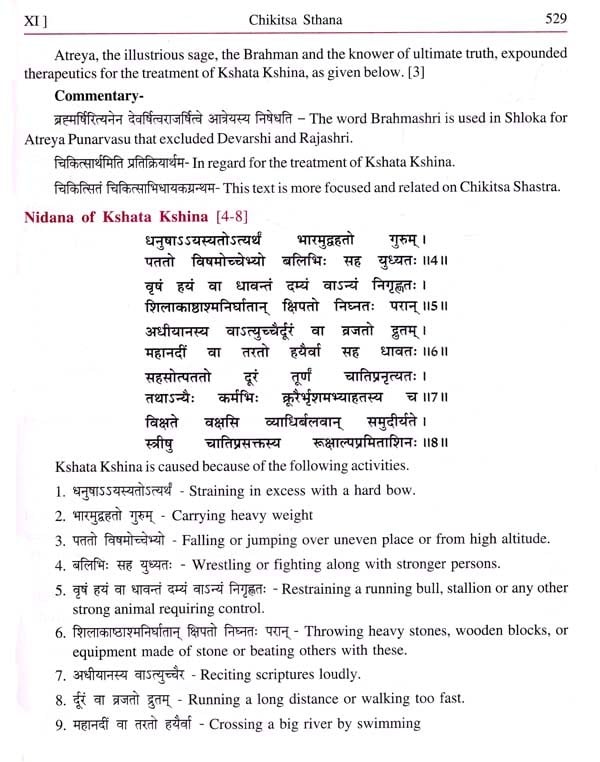