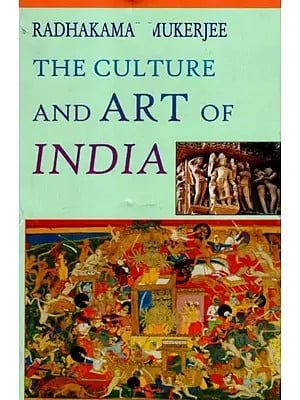 The Culture and Art of India

FREE Delivery
$33.60
$42
(20% off)
Collected Works of Dr. Radhakamal Mukerjee
Quantity
Ships in 1-3 days
Notify me when this item is available
About the Author

Dr. Radhakamal Mukerjee (1889 1968) was one of the greatest social scientists of India. He was Professor of Economics and Sociology at Lucknow University and later on Vice-Chancellor at the same University. He played an important and constructive role in country's freedom struggle. He was invited to deliver lectures at many Indian universities and also abroad including U.K., Europe, U.S.A. and U.S.S.R. He was a highly original philosopher of history, a penetrating interpreter of civilization and a gifted art theorist. He wrote more than 50 books covering these and other subjects. He held important positions in some national and international bodies. An American reviewer has considered him to have written "some of the most important works of our century."

The Continuity of Indian Civilization

CIVILIZATION in India is at once more ancient and alive than in any other country in the world. Yet few countries have experienced such invasions and conquests by alien races; even fewer contain such a diversity of natural conditions, customs and languages. The continuity of Indian civilization is largely the outcome of a well-nigh homogeneous pattern of myths and values, and a social order that it has evolved through fifty centuries of struggle, gradual assimilation and synthesis. In this immense territory invasion, war or conquest, if it has welded together or disintegrated kingdoms and empires, has not led to the wholesale expropriation of a population nor to the substitution of one culture for another; it has not materially in fluenced the habits and character of the Indian people.
The key to Indian life and development is to be found in a certain systematisation of manners, beliefs, and ethos, the balanced pursuit of the four-fold goals of life: Dharma, or absolute righteousness, Artha, or vocation, Kama, or fulfilment of desires, and Mokşa, or release, all in a governing metaphysical frame of reference. In the last analysis the essential gift of Indian civilization is the sense of Dharma, for each individual, ethnic group, caste, and vocation; each must pursue, accomplish and, finally, transcend a certain code of duties. in accordance with life's demands. Dharma is explained in the Mahabharata by Krisna as what protects or preserves: Dharma is what contains both the social order and the cosmic order, which in Indian thought are continuous. It is the divine and transcendental Justice, Truth and Law which uphold universe, mind and people. (Mahabharata, Udyoga parva, 137, 9). Dharma defines and regulates both the functions of social life and the goals of the individual and is interpreted across the centuries as the unbounded extension ofsocial relations, as the liberation derived from interdependence and solidarity. The individual's aim of perfection is the same as the group's aim of culture, complete, balanced and practical-the realisation of the Universal Self and the Universal Community, which India names and worships as Paramatman and Narayaṇa, identifying the one with the other.


The Indian Philosophy of Culture

The most logical, powerful and august presentation of the Indian philosophy of culture is undoubtedly the famous metaphysical triune image of the Cosmic Spirit, Siva-Maheśvara, Three-in-One, in the rock-cut cave at Elephanta (eighth century A.D.). The central face is that of Tatpuruşa-Sadasiva, or the Absolute, self-luminous, neutral and transcendent; the right face is that of Aghora-Bhairava, or the Ferrible One, grim, frowning and defiant in its renunciation and destruction; while the left face is that of beautiful and bejewelled Uma, Siva's consort, seductive in her playful creativity, love and compassion. In Indian culture Uma or Sakti, who holds a lotus in her hand, symbolises the goals of Artha and Kama, or wealth, beauty and the embellishment of life. Aghora, who holds a serpent between his fingers, represents the goals of Dharma and Moksa, or righteous ness and freedom from bondage; while from the viewpoint of the self-absorbed Tatpurusa, the alternating, ever-recurrent rhythms of creation and silence, activity and repose are but passing apparitions: they rise, multiply and dissolve, like all phenomenal or Mayic appearances, into Himself. In some variations of this composite metaphysical image, Sadasiva, as the serene yogi, is as usual in the middle, but Mahakala, or Great Time, licks blood from a plate on the right, and Mahamaya, or Great Illusion, looks at her own beauty in the form of the universe reflected in a mirror, on the left. The Indian philosophy of culture integrates and harmonises the four-fold values (Chaturvarga) of wealth, enjoyment, righteousness and salvation, whether individual or collective, based on the true nature of self and Maya. This is symbolised in the figure sculpture by the marvellous balance and integration of the three heads of Siva, achieved through the bold and original use of a common gigantic mukuta, or royal tiara. In the shimmering chiaroscuro of the deep cave, Siva's expressive side-profiles seem rather hazy and insubstantial, paling before the majestic presence and soft radiance of His first and realEssence (Sadasiva) in the middle. The Supreme Self (Paramatman) in the centre is the eternal, omniscient, unconcerned Witness (Sakşi) of the joys and sufferings of Samsara, which are no more real than the manifold attributes (gunas), names (nama) and forms (rupa) of the One who is attributeless, nameless and formless, and whose intrinsic nature underlies the unity of manifestation and non-manifestation, activity and silence. The One and the Indivisible disguises Himself in the male and female visages or masks, and the contrasted processes of life, mind and spirit that they represent. These comprise the world spectacle as it appears to one in the grip of Maya or nescience. In the real Self, or Siva, nothing happens and everything is contained. The real Self is all-full, all-poised, all-silent. The two other faces of Siva the empirical or lower selves-are ceaselessly astir and assertive, creating, transforming, and experiencing the phenomenal world. Yet these belong to, and emerge from, the self's higher, immortal, solely real Self (Sadasiva). Thus the Real, the Eternal and the Infinite gives status to the unreal, the mortal and the finite. Such is the vision of Sivahood, which unfolds the eternal rhythm of life and death, the creation and transformation of the universe, as the pulsation of one's own Self (Paramatman).
Once familiar throughout India and even beyond, in Gandhara, Turkestan and Cambodia, and traced in the Yun k'ang cave in China, and as Dai Itoku in far-oll Japan, the Elephanta Siva-trinity is a unique and comprehensive revelation of the master theme of Indian culture the sovereignty of Being, Siva-Atman, and the unity of consciousness, or the identity of Being and Becoming, of the Real and the Mayic, symbolised and interpreted in Indian experience by the dualism of the masculine and feminine principles. The stones of Elephanta and unequivocally proclaim the profound message of India: 'Activity is true worship when every act is done for the sake of Siva or the Real Self; silence, again, is true worship when it is the adamantine absorption of self in the Self'. Yet, revealing as it does the three-fold primordial aspects or oscillations of Man and Nature, this image does not depict a deity but rather symbolises and evokes a generic process, the transformation of the human spirit, irrespective of religion and social tradition. It speaks in a universal language, and can elicit contemplation from spiritual persons in any country; it is, indeed, one of the most sublime plastic creations of the world. **Contents and Sample Pages**