The Evolution of Ghalib

In The Evolution of Ghalib,the author, Hasan Abdullah, provides a detailed introduction that describes Ghalib’s life history, brings out his persona and situates his work in time and space. He briefly discusses the Urdu language and the ghazal as literary form and familiarizes the reader with the words, symbols and concepts crucial for understanding Ghalib’s continually evolving poetry.

Based in a chronological reading of Ghalib’s Urdu ghazals, the author identifies the different stages and phases of the poet’s development and from each of these phases selects and interprets verses, including those that differ from the dominant trend, in order to reveal Ghalib’s intellectual evolution. The book aims to make reading and urdu ghazals a pleasurable and enlightening experience.

Schooled in Jamia Millia Islamia, New Delhi. Hasan Abdullah is a graduate from Delhi College of Engineering and postgraduate from the Indian Insitute of Technology Delhi. Besides consulting , researching and publishing as a professional engineering researcher, he has published articles on society and literature , including some on the poetry of Ghalib. In Urdu and English periodicals. He discusses Urdu poetry of Ghalib at

https://ghalibkaarvaan.wordpress.com A. Naseeb Khan has a doctorate on translation of modern Urdu poetry into English. He has to his credit several translated and edited volumes.including the translation of Maut ki Kitab, an Urdu novel by Kahlid Jawes; a monograph on Moin Ahsan Jazbi, published by Sahitya Akademi; and a collection of poems titled Rip Not the Sore. At present, be is the Principle of Syed Abid Husain Senior Secondary School, Jamia Millia Islamia New Delhi.

Mirza Asadullah Beg Khan Ghalib (27 December 1797-15 February 1869)-Arguably the best exponent of the Urdu Ghazal –was born and raised in the northern region of nineteenth-century feudal India. During Ghalib’s life the British, who had completed the conquest of India by 1803, had allowed the old Mughal court in Delhi to continue as the centre of cultural life.

For almost 200 years from the eighteen century to the twentieth century, while Urdu was the lingua franca of India, Persian was the language of governance, diplomacy and culture. As a result, it was considered prestigious to write poetry in Persian during that time.

Urdu got boost in 1972, when Shah Alam II took up residence at the Red Fort in Delhi and gave patronage to Urdu and used it informally around the court. In the eighteenth century, the development of Urdu, that it Persianized Hindustani, took place in Mughal court circles in Delhi. Prior ot that, one finds it in the Dakani speech of the Deccan.

Into this milieu appeared Ghalib, a man with an aristocratic background, a fatherless childhood and an early yoth of carefree gaiety. However, his adult life was beset with serious financial difficulties and he suffered other indignities. He interacted with several of the most famous Indian Litterateurs and British scholars of nineteenth-century India.

Ghalib’s first literary work,a collection of Urdu poetry,was ready by 1816, when he was just eighteen years old. T that time, however, he was engaged in mastering Persian which that society considered the literary language. In 1828, Ghalib compiled the manuscript Gul-e Rana, which contained twenty-seven Persin ghazals in addition to his Urdu poetry. Although the quantum of Ghalib’s poetry in Urdu is much less than in Persians but he has become ‘Ghalib’ (predominant) for posterity because of his Urdu ghazals.

Ghalib’s Urdhu ghazals attract a highly diverse set of people –rich and poor, literary and scientific, uneducated and erudite, layperson and polymath, lover and beloved, men and women, young and old, even the oppressor and the oppressed, those sunk into the past and reactionary, as well as those who are forward-looking and progressive. The plausible reasons appear to be that his couplets which are expressed in the most exquisite language using devices such a swordplay, hyperbole, irony and paradox, reflect diverse situation, depict a range of human emotions and provide deep insights into man’s life and his relationship with Nature. To quote Ghalib:

How great delight her eloquence contain! For what she said

Ghalib’s thoughts have been an irresistible draw for me and some of my friend from our college days. This couplet, which later turned out to be hallmark of his poetry. Attracted us most, and was the topic of much discussion and debate:

God was, when nothing existed, God would have been, if nothing had existed

My being is cause of my nemesis, had I not existed, what would have happened?

Around a decade ago, when I, along with a friend, scanned all the available books on Ghalib in English, we were surprised that despite the vast amount of literature on his poetry, the aspect of time was missing. Even in Urdu, the solitary exception was then chronological compilation of Ghalib’s complete Urdu poetry by Kalidas Gupta Reza. However, People ignored it and continued to read the popular Diwan-e Gahlib, the selection of Ghalib’s poetry arranged according to rhyme, and no litterateur ever tried to take advantage of this gold mine to have a deep into the evolution of Ghalib –as an intellectual or even as a poet.

I felt that a chronological studyof Ghlalib’s Urdu ghazals would help in better appreciation of his poetry and shed some light on what are, or appear to be, radically divergent views. For instance, some of the following couplets extreme dejection whereas others are brimming over with satisfaction.

Let me now dwell in the part of land uninhabited,where there is No one to share my poetry, and no one knows my tongue

I crave no praise, nor do I bother for prize

If my poetry shows no depth, let it be so

Though the world has yet poets with their signature styles

They say, with his singular style of expression, Ghalib stands apart

These issues of mysticiam- and your sublime discourse, Ghalib

We would have taken you for a saint, had you not been a boozer

The result of my research is the book wherein I have interpreted selected couplets that are chronologically arranged, thereby revealing Ghalib’s evolution of thought. 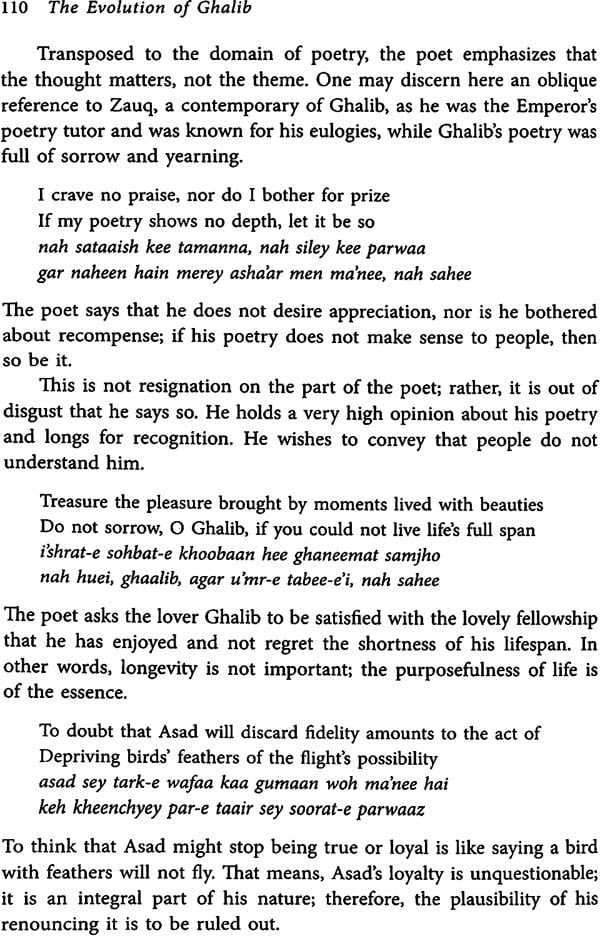 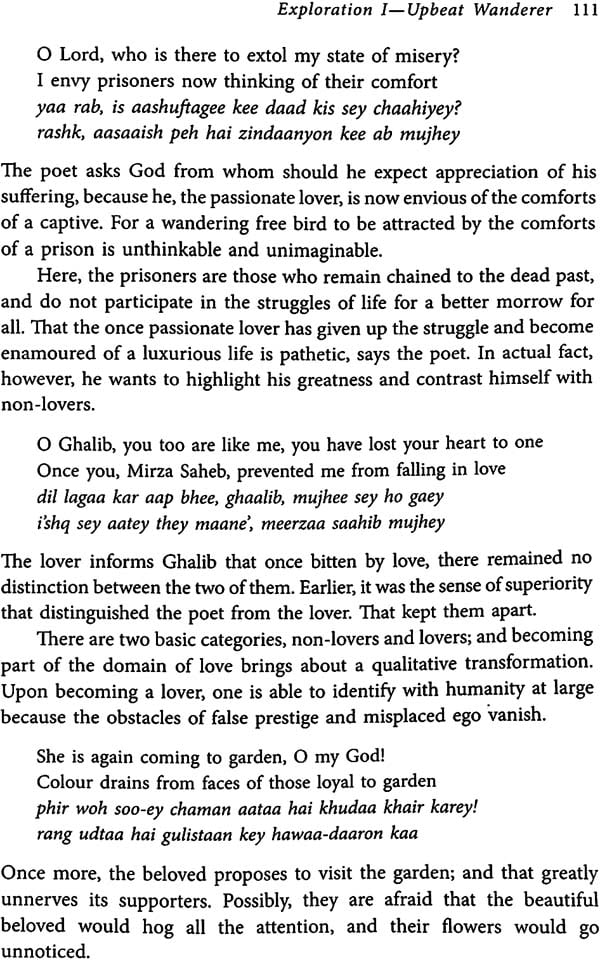 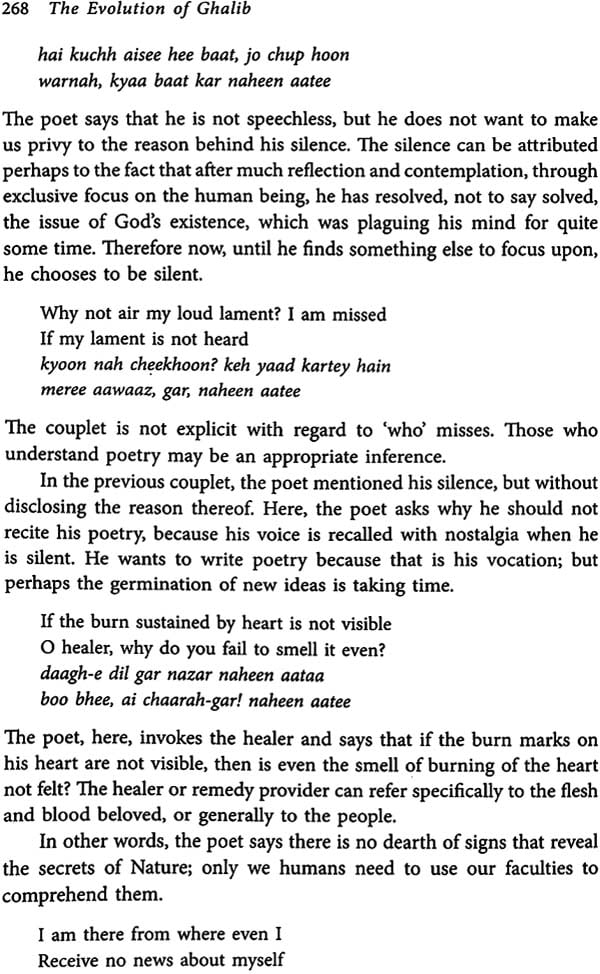 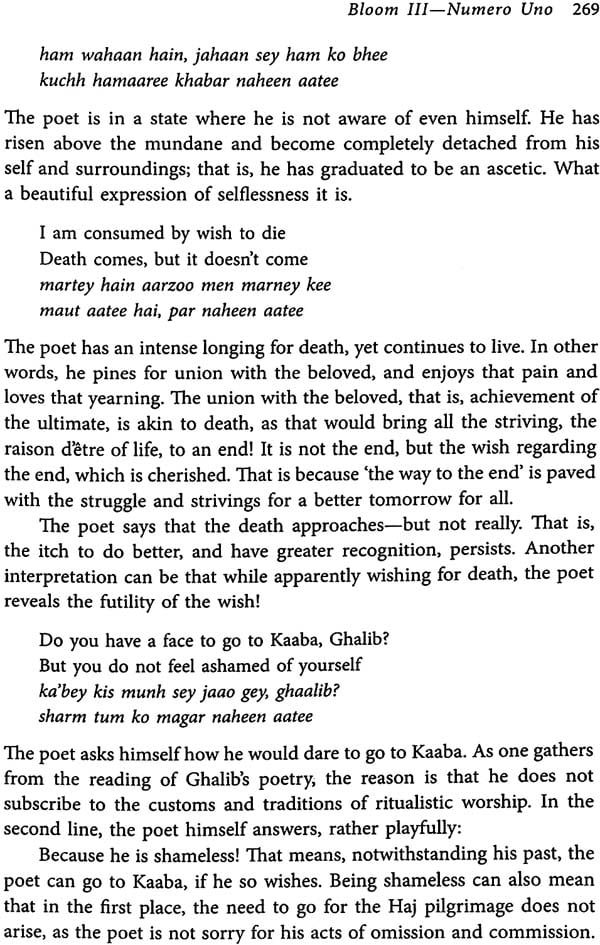