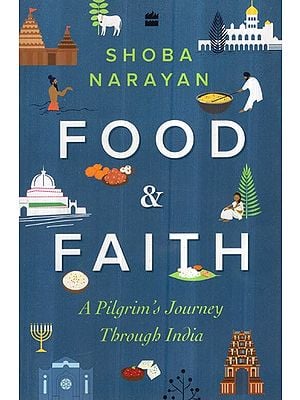 Food and Faith- A Pilgrim's Journey Through India

All religions have some teachings in common. They all preach the values of leading a good life and developing courage, character and tenacity to cope with the ups and downs of life. Faith, at its best, is about giving strength and succour.

India is home to a multitude of belief systems, including Hinduism, Islam, Sikhism, Christianity, Jainism, Zoroastrianism and Buddhism. Yet, the country remains an enigma. In Food and Faith, we visit Kashi, a centre of learning where young ascetics and students flocked to study with scholars, formulate their beliefs and search for the Divine; the Ajmer Dargah, whose distinctive beauty is that not only is it open to people of all faiths, it welcomes them; the Golden Temple, whose community kitchen feeds thousands of people from different faiths on an average day. And then there is Goa too, with its Layering of a Hindu past with a Mediterranean soul, of Latin beats with sitar strings, of Indian spices with European stews.

Author and columnist SHOBA NARAYAN attempts to peel back India's Layers and explore the nation's heart and mind. She visits many iconic places of worship, tries to understand their rituals and makes sense of religious polarities. In doing so, she answers a pertinent question that confronts any modern seeker of spirituality: what sustains us?

SHOBA NARAYAN is an award-winning author and columnist who writes about food, travel, fashion, art and culture for publications such as Conde Nast Traveller, Financial Times, Time, The New York Times, The Wall Street Journal, The Washington Post and Newsweek, among others. She graduated from the Columbia Journalism School with a Pulitzer Traveling Fellowship, awarded to the top three graduates in the class.

THIS BOOK BEGAN AS a food book before it morphed into one on faith. Two decades ago, editor Kamini Mahadevan approached me to write a book called 'Sacred Food'. The idea, she said, would be to link food and faith. I would visit Hindu pilgrim sites and write about the sacred food or `prasadam'.

We made a list of temples with signature foods and then chose amongst them. Tirupati laddu, for example, was nixed because it was overexposed. The whole world knew about Tirumala Tirupati temple and its prasadam. Instead, we decided to choose lesser known temples, trying to balance regions and tastes.

The original list only had Hindu temples, because the idea of prasadam was specific to Hinduism.

I started with a simple calculation. I would visit those temples that had good prasadam or sacred food offerings. These are, literally, foods for the gods, which belong to a time, place and a specific deity. After offering it to God, the devotees partake of this 'gracious gift of God'. I had routinely visited temples all my life and partaken of the prasadam. My ancestors originated in Palghat and so Kerala temples and their thick fragrant ghee (nei) payasams were practically a summer's rite of passage, year after year. I grew up in Chennai, so Tamil temples with their rice and lentil prasadam (chitra anna, or rice varieties, and chundal or chickpeas seasoned with coconut, raw mango and lemon) were part of our family's beat.

Using food as an anchor and guide seemed like a good way to parse the hundreds of thousands of Hindu temples in India, each with specific creation-myths, rituals and, yes, recipes. If nothing else, I would eat well.

(Let me just add here that although in North India, words are shortened of their ending, I have chosen to go the South Indian route here so prasad becomes prasadam and ganga-jal becomes ganga-jalam.)

An interesting thing happened as I traversed the world of Hindu temple prasadams. I discovered that while the food was interesting, my journey also prompted larger questions about faith and its place in our lives and society. And that is what this book eventually became: a pilgrim's quest into the world of faith told through food.

When I began writing the book, it was mostly about Hindu temples and their prasadams. And so it has remained, with a few exceptions. There is a saying in Hinduism that applies to pilgrimages: You can only go to a temple when the god 'calls' you. In that same spirit, some of the other faiths that make up India `called' me through a series of fortunate incidents that resulted in chapters of this book.

Jainism and Zoroastrianism haven't made it to the book for a variety of reasons. I have visited their shrines and interviewed experts, and I am in the process of compiling these into chapters. I will have to wait to send them out to the world: perhaps as a sequel.

In the end, this is a book largely about Hinduism written by a (sceptical) Hindu who seeks to answer larger questions about faith. Like the below.

What is the role of religion in your life today? Do you pray? How do you pray? Do you commune with the divine through rituals? Is it through chanting verses in Aramaic, Arabic or Sanskrit? Or is it a comforting routine-going to the mosque, church or temple once a week or month? Is religion part of your identity? Or is it something that you seek to distance yourself from? Is it an occasional activity that you do out of habit or because your parents ask you to? Or is it simply a connection with your heritage, home and ancestors? Do you think religion is a private act or can it be part of the public discourse? Are these questions making you uncomfortable?

As it turns out, the religion that I was born into, Hinduism, has answers for many of the above questions. It is also an imaginative faith, full of myth and folklore, rituals that incorporate lights, lamps, flowers, music, dance and sacred food.

All religions share broad strokes. They talk about developing courage, character and tenacity to cope with the ups and downs of life. Faith, at its best, is about giving strength and succour.

I am a Hindu. It defines who I am, perhaps not as much as feminism, and certainly not as much as being a writer or a mother. But if I had to list out the top five things that are part of my identity, it would be part of the list.

Around the time I began visiting temples to write about their sacred food, I decided to figure out my faith. I wanted to figure out how I felt about the Hindu rituals and practices that I had dismissed as being patriarchal. I re-read the marvellous and imaginative Hindu myths that I had heard from my grandmother as a child. And I talked to many experts about my religion.

After being an atheist as a teenager, agnostic in my twenties and thirties, I turned to religion late in life. As the mother of two young daughters, the daughter of fairly religious, traditional, South Indian parents and in-laws, I had to come to terms with my religion, and indeed, all religions. Instead of avoiding and disdaining faith, I had to find a way to include it in my life. For my children's sake. For my parents' sake.

Food seemed like an innocuous way to do this. Sacred food as a way of fusing a secular identity with spirituality in some form: that was my plan. What I didn't know, what I didn't anticipate, is that once you step into the realm of faith, your heart and emotions open in ways that you cannot predict or control. You'll see.

There is one caveat that I would like to make here: As a deeply secular person, I find caste mentions abhorrent. But it is hard to get away from that in certain areas-crafts and textiles, for instance, are linked so much to caste. As is faith/religion. It is hard not to talk about caste when you write about religion.

Let me tell you what this book is not. It is not a scholar's guide to religion or food. Rather it is a sceptical seeker's pilgrimage to understand her faith. And like I said, while a few other faiths make cameo appearances, this is largely a book on Hinduism.

I hope that you, dear reader, will accompany me on this journey. Your questions may be different than mine, but together we will discover food, faith and, through them, India. Or our version of India anyway. 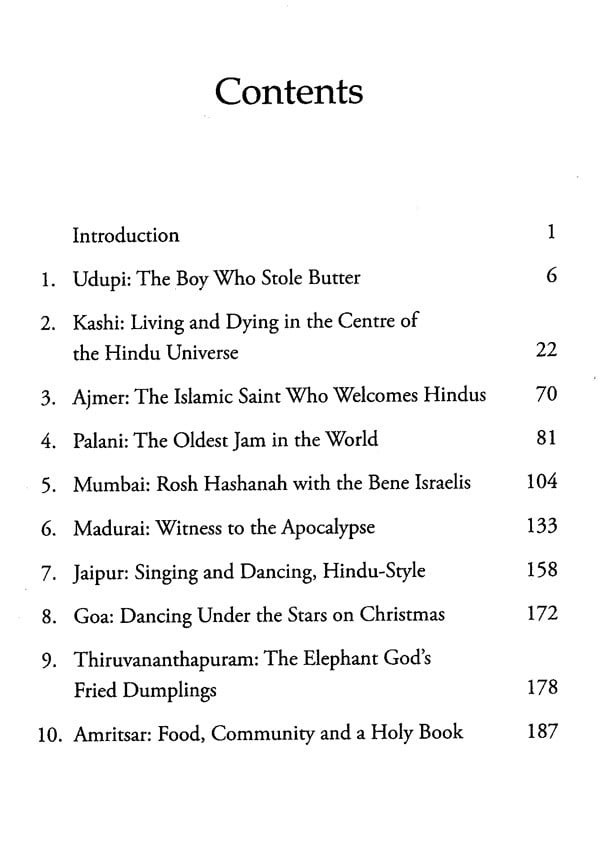 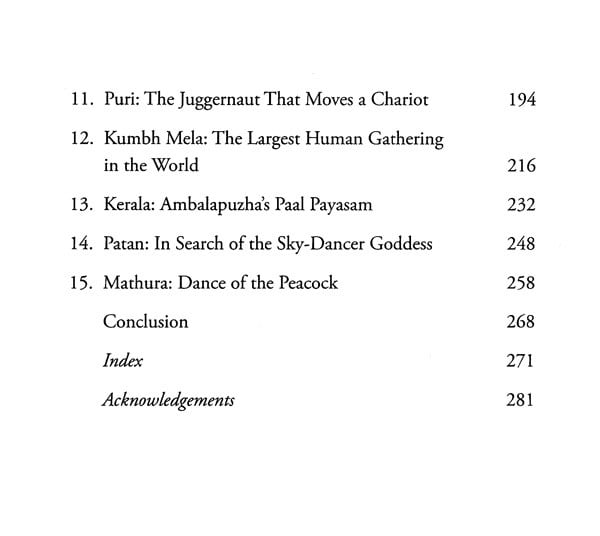 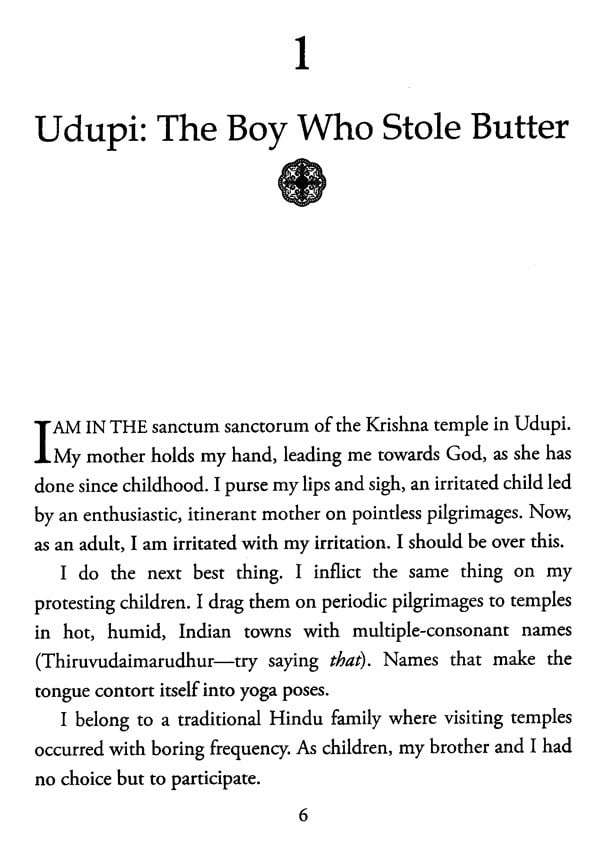 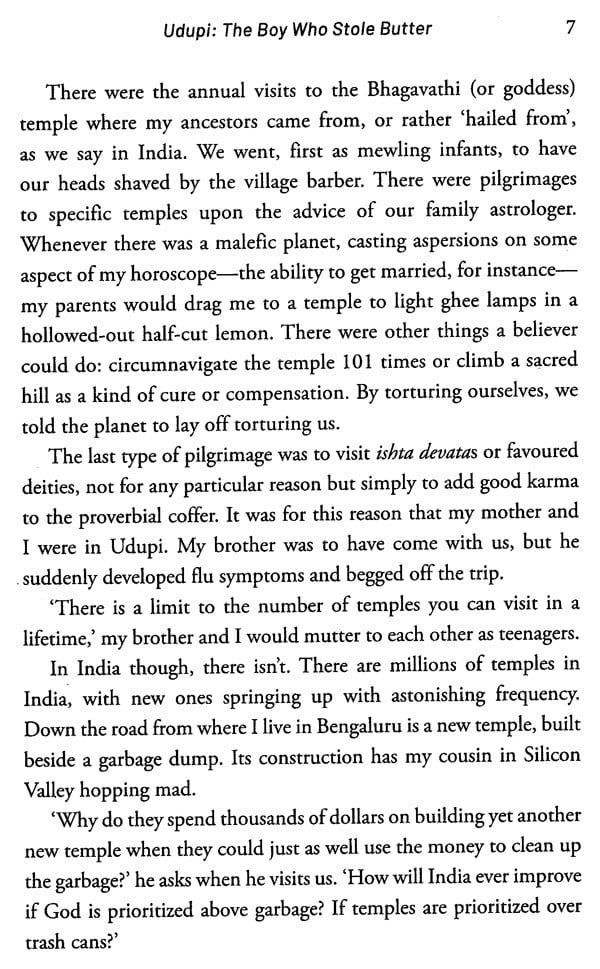 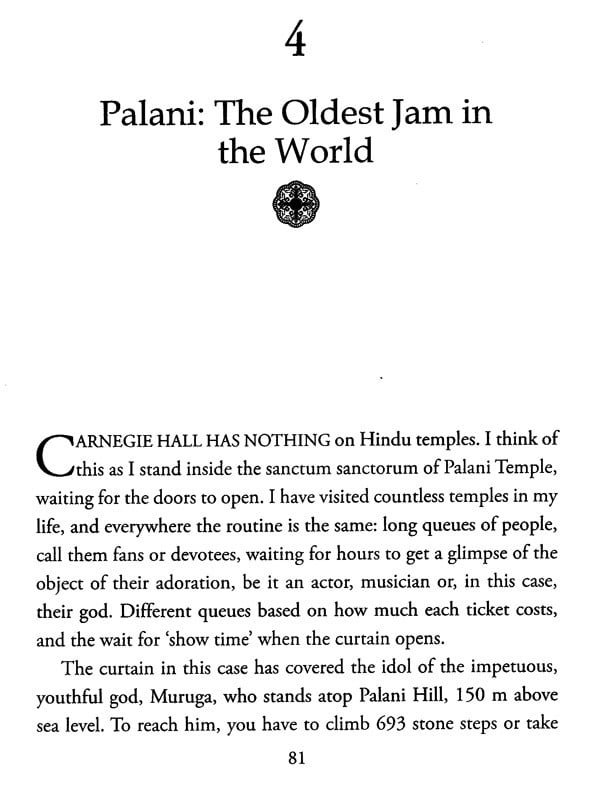 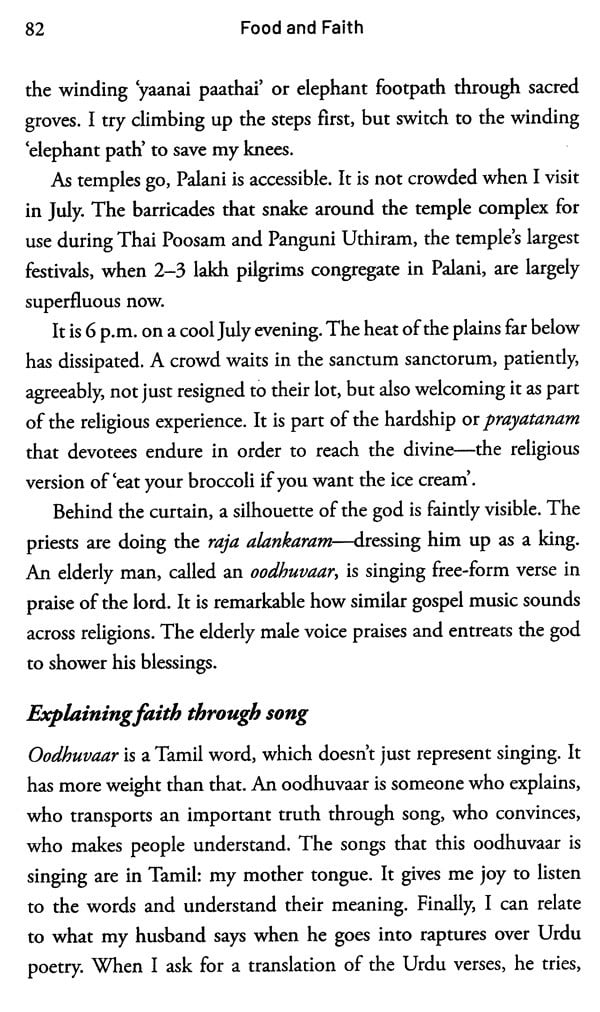 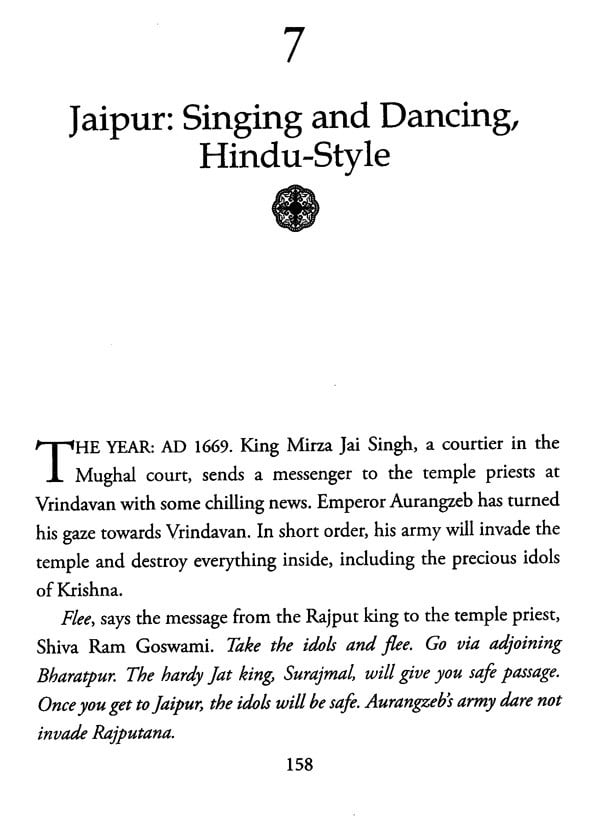 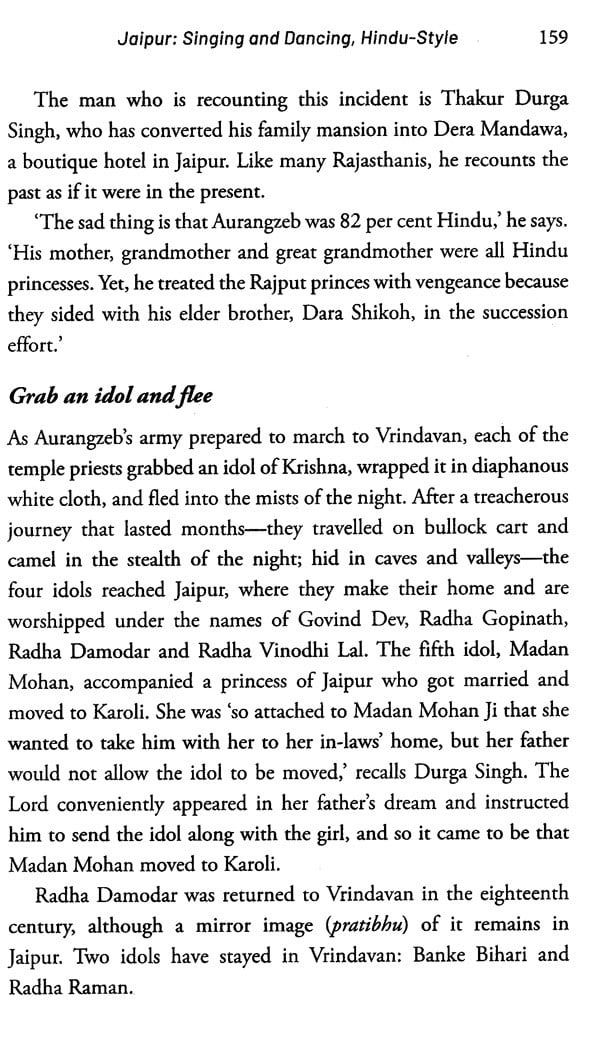 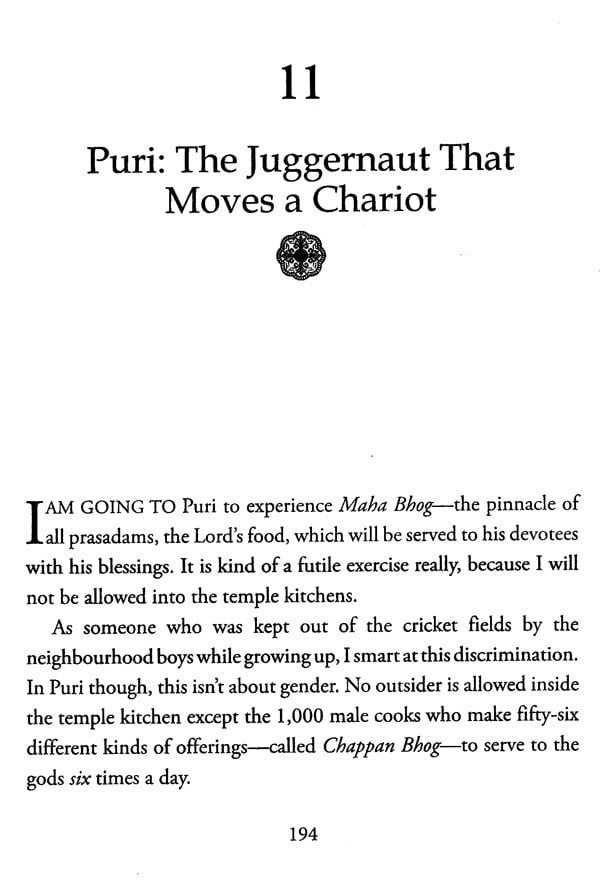 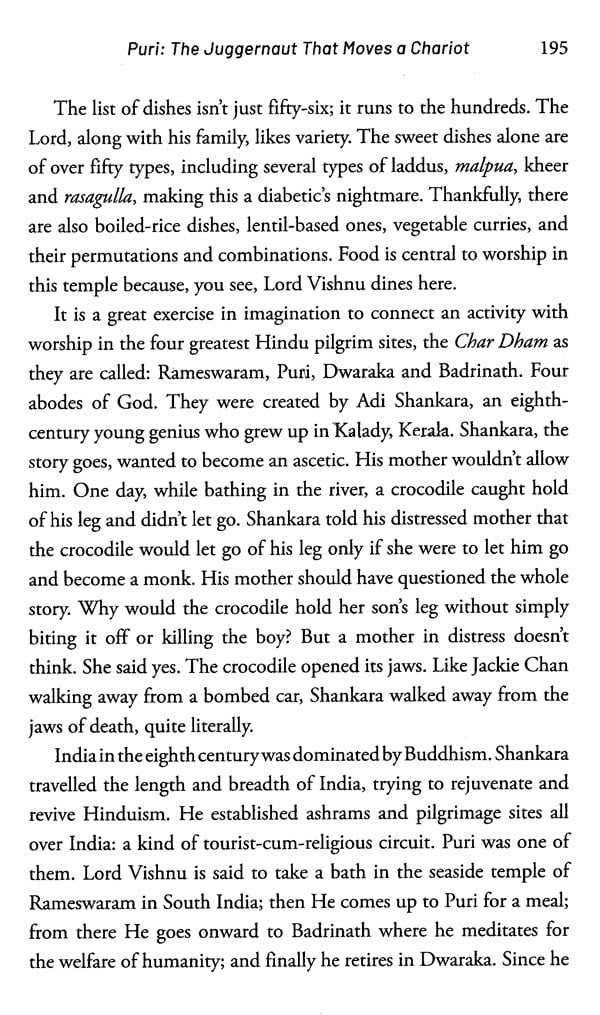