"For those people who take refuge in me and contemplate of none but me, I take the responsibility of granting everything they need and preserving everything granted" - thus proclaimed Lord Krishna in the Bhagavad Gita. The same omnipotent personality of Godhead, who made His pledge in Gita as the Guru and guiding light to Arjuna, has reincarnated in our midst as the Shankaracharya of Sringeri, His Holiness Sri Sri Bharathi Theertha Mahaswamiji. One does not need unique qualifications to receive the boundless grace of that effulgent Sun other than the willingness to surrender whole-heartedly. The generosity of His Holiness and His illimitable mercy transcend caste, creed and religion differences to fulfill the needs of those who seek Him. Our Guru, the resplendent star of the unbroken chain of Sringeri Shankaracharyas, has showered countless blessings on us. Words are insufficient to describe His glory, which is why the scriptures proclaim Guru as the embodiment of The Trinity, Brahma, Vishnu and Shiva.

Our Sadguru, Sri Bharathi Theertha Mahawamiji, is the sublime ocean of mercy who answers every prayer of His disciples. Those who contemplate Him are blessed with holistic material and spiritual existence. Akin to the celestial wish fulfilling tree, His blessings have fulfilled His devotee's needs for progress in spirituality, guidance in devotional service, wealth and material comforts, marital harmony, career success to mention a few.

The serene majestic form of His Holiness is as radiant as the morning sun. The waves of mercy in His eyes alleviate our afflictions. His face, illumined with intellect, always bears a benign smile. His countenance, filled with grace, is like a fully blossomed lotus. His appearance, akin to the full moon of compassion, reflects the brimming divine ecstasy within Him. Words are insufficient to describe neither His divine form nor His divine persona.

The striking form of His Holiness, who is the Master of all Yoga, draws the viewer's heart, with a flawless profile and a smile that delights the eye.

The side long glance of the supreme Guru is comparable to the celestial wish yielding tree. It overflows with the essence of mercy, quenching the longing of distressed souls. Adi Shankara refers to Sri Guru as "Ahetuka Daya Sindhu", the ocean of mercy that does not require a reason to shower its grace.

When we have surrendered at the lotus feet of Sri Guru, His glance filled with infinite mercy and His counsel, what more could we need to achieve Self realization? We have all been recipients of the grace of our Guru, Sri Sri Bharathi Theertha Maha Swamiji. He has showered His blessings abundantly in our lives. Situated in Sringeri Sharada Peetham the foremost of the four Peethams established by Sri Adi Shankara, our Guru bestows His benign grace for the benefit of the world. Our meritorious deeds over millions of previous births have fructified to lead us to our Guru. We are truly fortunate.

The President of Salem Sri Mrigaseersha Committee, Smt. S. Vijayalakshmi, is an ardent devotee of His Holiness Sri Sri Bharathi Theertha Mahaswamiji. Out of her profound devotion, she has resolved to publish a compilation to elucidate the transcendental glory of His Holiness to commemorate His 60th birthday. Each of us has much to benefit by reading this book. She requested several devotees who had sustained the grace of His Holiness to share their personal life experiences. These singular experiences have been compiled into this book with the sole, superior purpose of proclaiming the greatness of His Holiness, who bears the absolute blessings of Mother Sri Sharada and who is also the incarnation of Goddess Saraswathi.

His Holiness, the 36th pontiff of the unbroken chain of Shankaracharyas of Sringeri, is the embodiment of divine energy of the austerities performed by all His predecessors. Any initiative that His Holiness conceives will be fulfilled by His cosmic power and the consummate grace of Goddess Sharada. Likewise when His devotees take refuge in Him, He guides and delivers them from all tribulations.

At times, His Holiness Sri Sri Sannidhanam has granted His steadfast devotees the privilege of private audience. Once I had the privilege to receive such opportunity. After Sri Sri Maha Sannidhanam had attained Jeeva Samadhi and Sri Sri Sannidhanam had assumed full responsibility, He visited Rajapalayam and camped at our residence during His Vijaya Yatra to South India. The day He was leaving Rajapalayam, He summoned my family and me and granted that I will be blessed with a grandson. True to His words, we were blessed with a grandson. We named him Abhinav Ramasubramanyaraja. This event is a proof of the consummate grace of Goddess Sharada and the divine prophetic vision of His Holiness.

In addition to praying for material wealth and well being, we should also seek the blessings of His Holiness Sri Sri Sannidhanam to realize and experience that our Atma is the embodiment of pure bliss.

Smt. S. Vijayalakshmi, who has undertaken arduous efforts to publish this book, is often consulted by devotees for relief from various trials and impediments. Based on Prasnam, a branch of astrology, she prescribes expiatory worship to those who consult her. Prior to practicing Prasnam, she invokes the inimitable blessings of His Holiness. As a result, all her clients reap complete solace and succor. Also with the sovereign grace of His Holiness, she has presented us this exceptional book titled "Guru Mahimai". I extend my heartfelt compliments and best wishes to her. 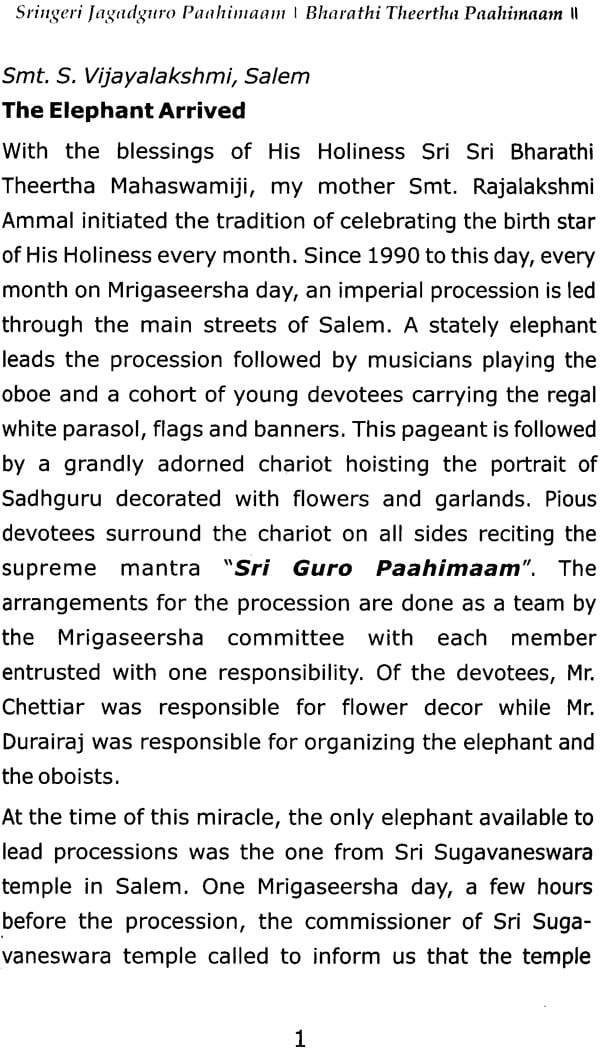 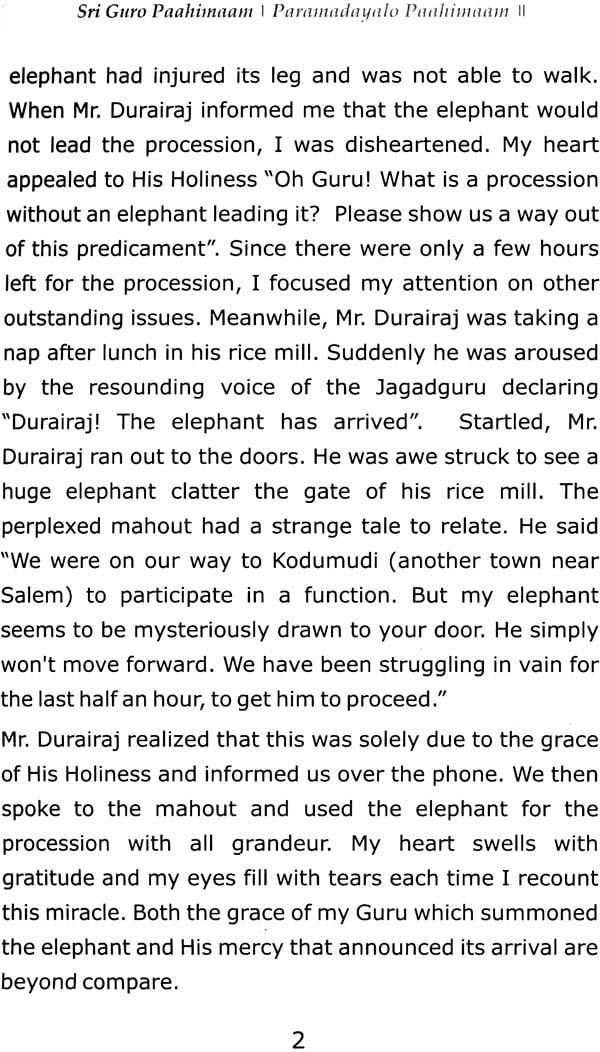 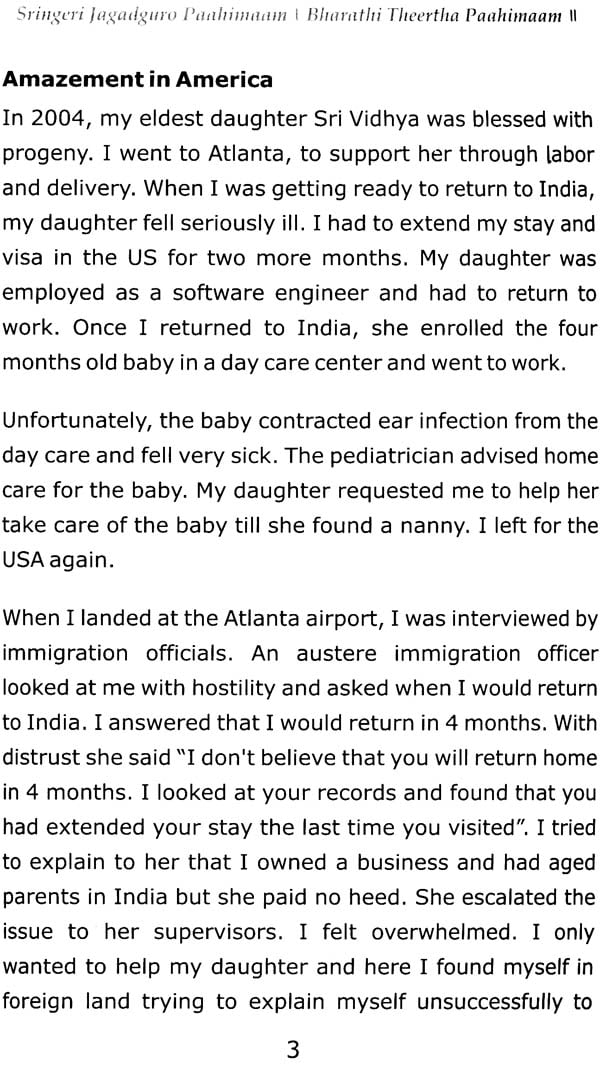 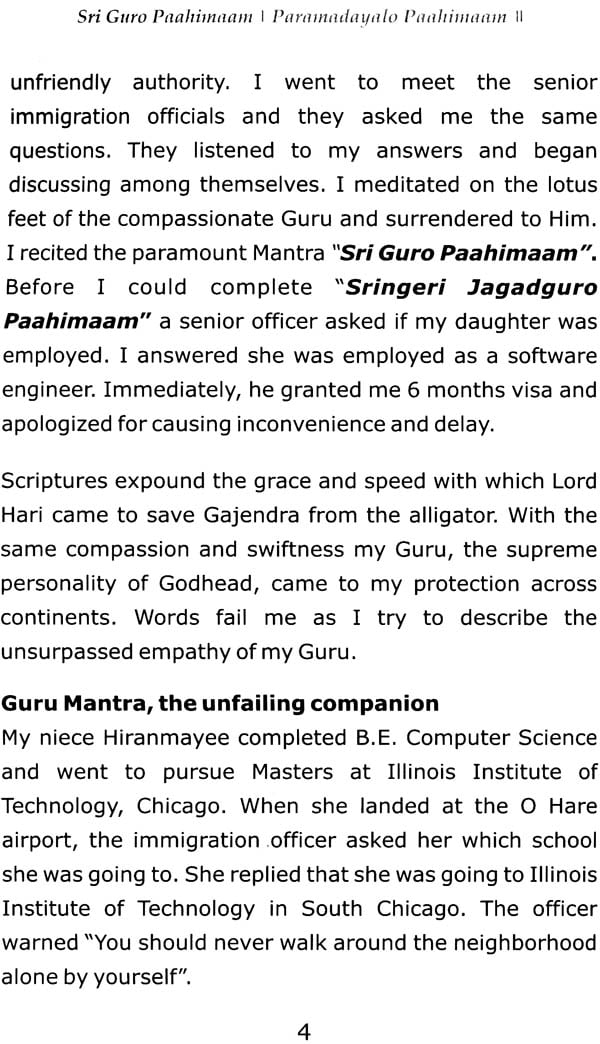 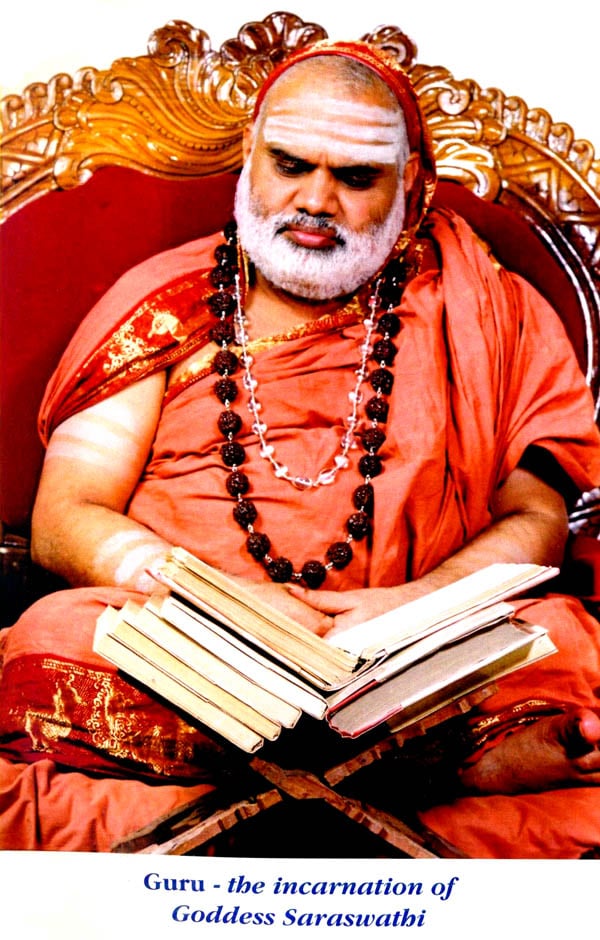 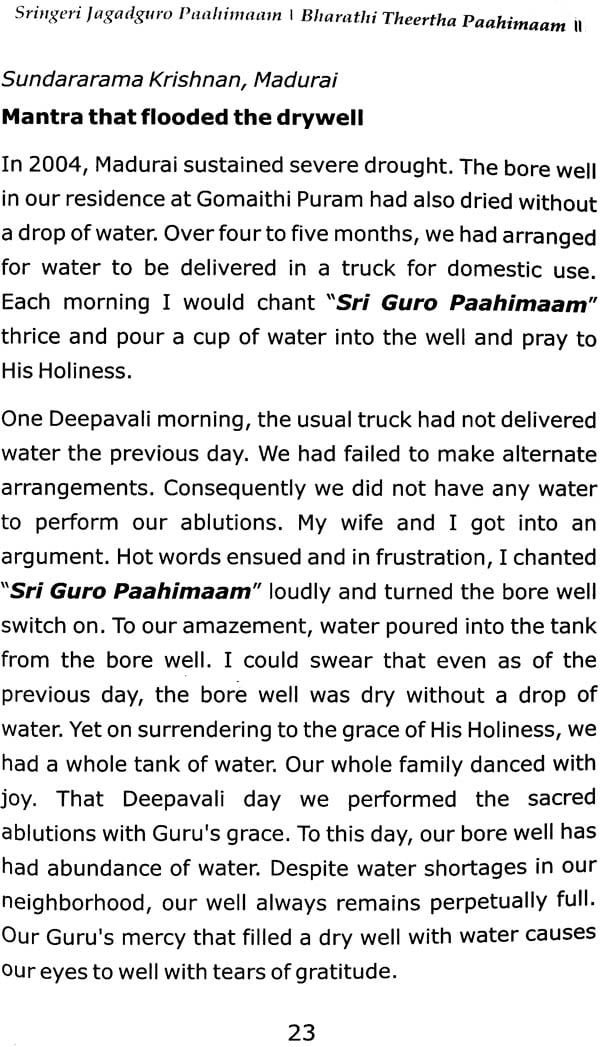 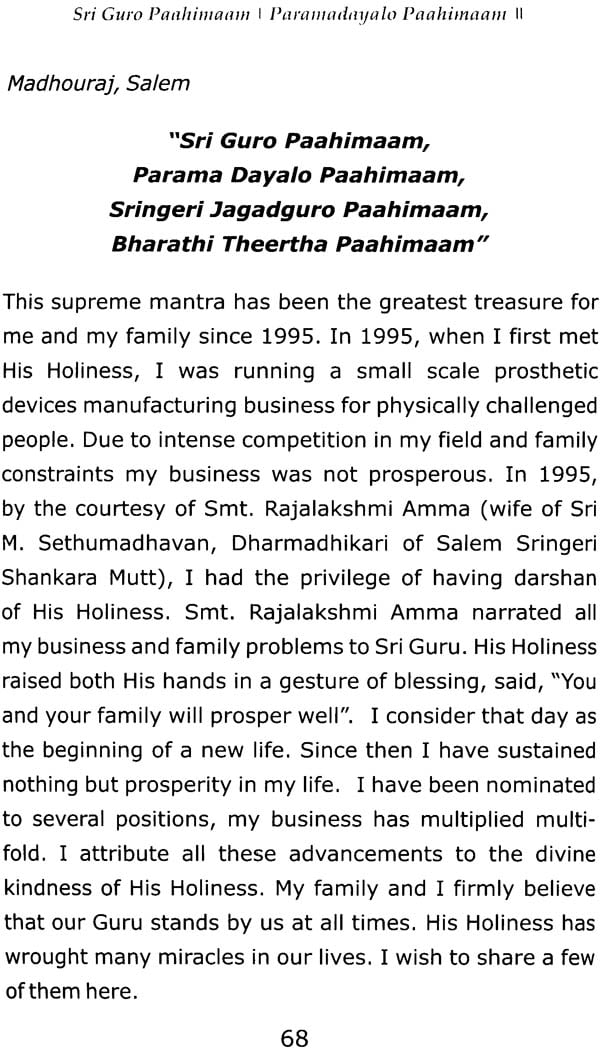 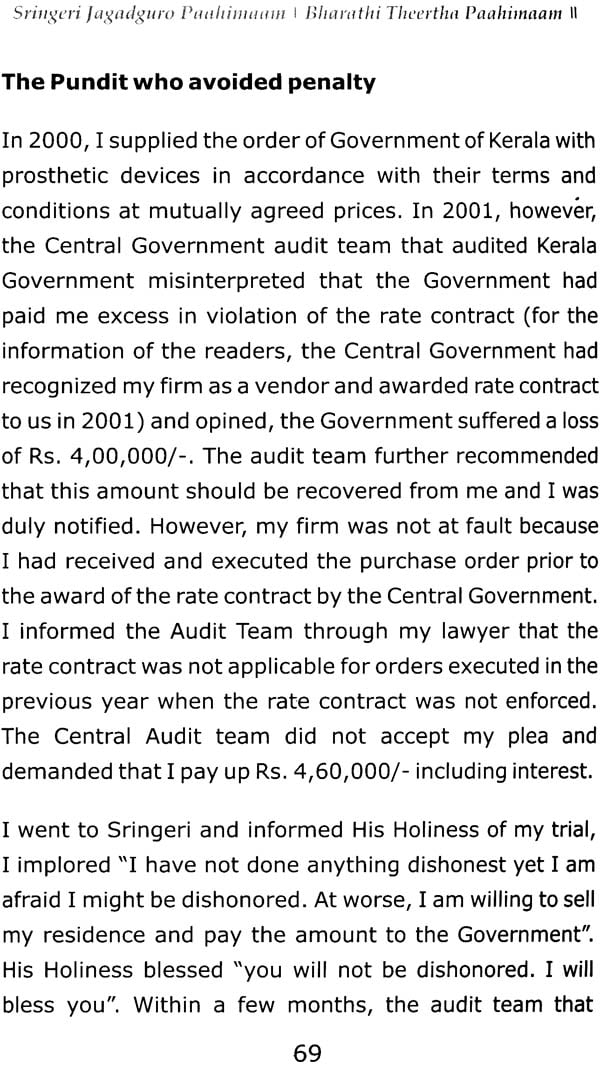 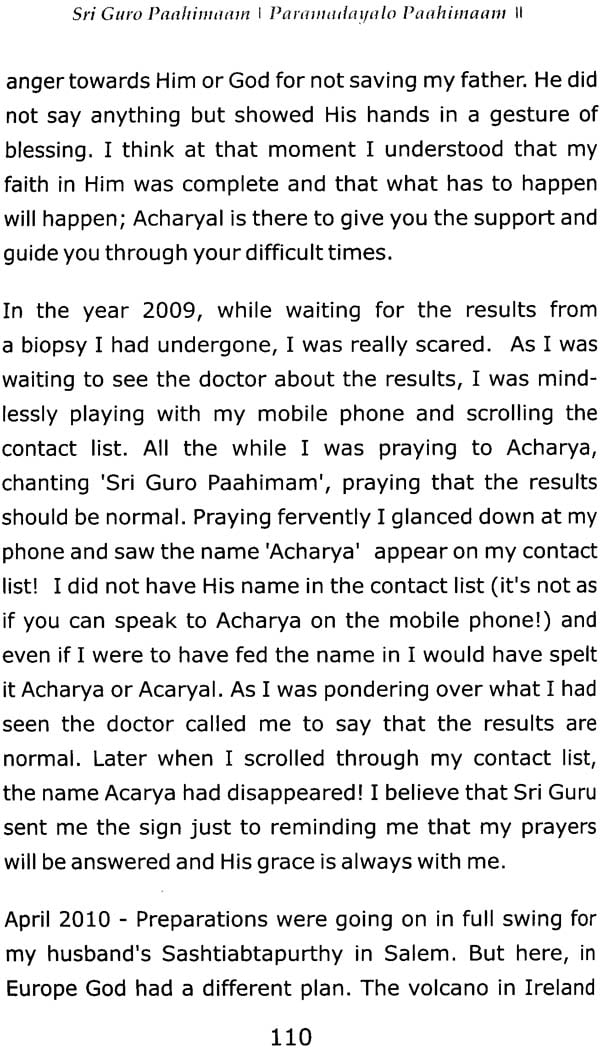 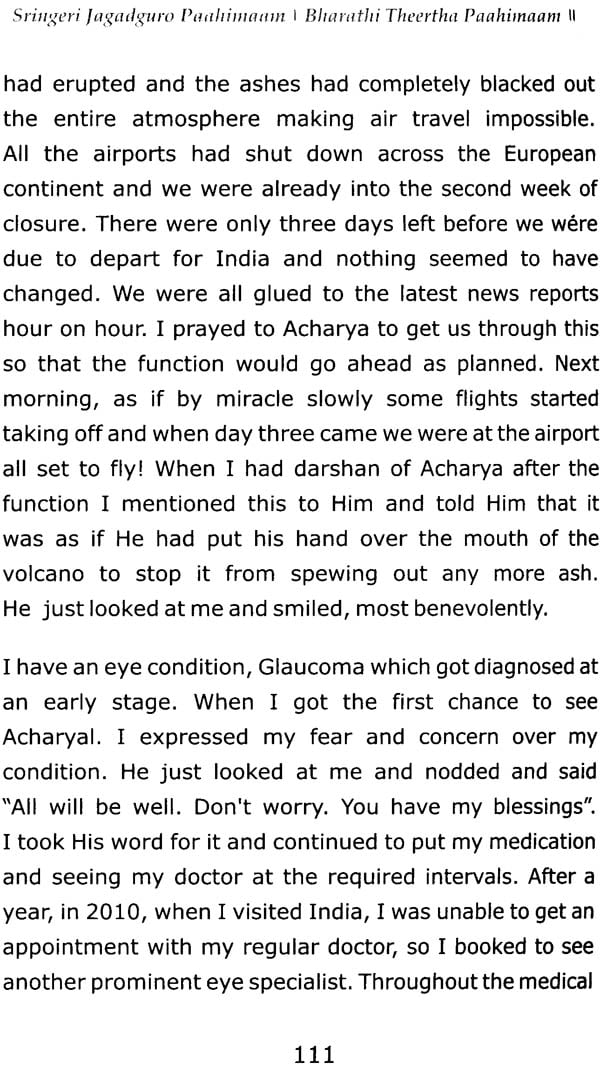 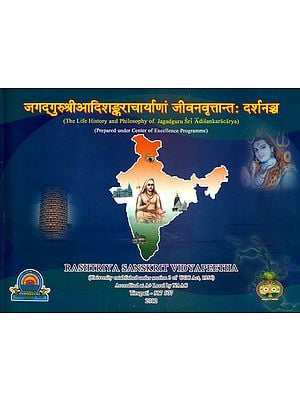 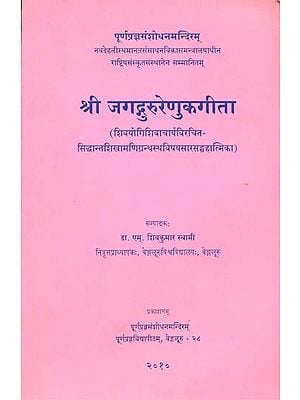 The Call of The Jagadguru
By R. Krishnaswami Aiyar
$15
Out of Stock