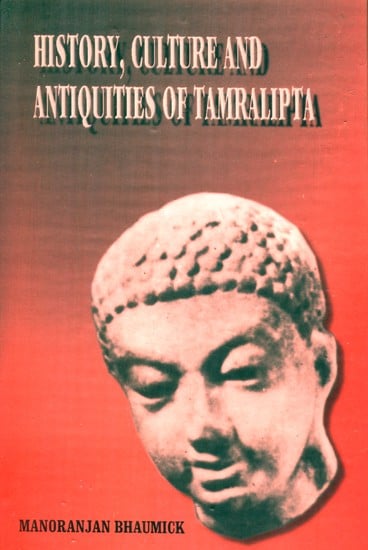 23 years in business
About the Book
This work dealing with History, Culture and Antiquities of Tamralipta and its relation with ancient civilized world, is an interesting and thought provoking study. This work deals with a comparatively uninvestigated topic of absorbing interest of ancient Indian history and the author's untiring efforts made this work fairly an exhaustive study. This work is characterized by originality and new approach towards the interpretation of materials especially the antiquities.

Therefore, this book will be well received by the students and teachers of ancient Indian history, culture and Archaeology in particular and by the persons interested in Indological studies in general.

About the Author
After schooling and graduating from Nalchik N.N. Vidyayatan and Tamralipta Mahavidyalaya (Tamluk College) in Midnapur district, West Bengal, he did his Post graduation from University of Calcutta in Ancient Indian History and Culture in 1972 and also took his Ph.D. Degree in 1996 from the same University. Presently he is attached to the Vidisha Research Institute as a senior teacher of history: He attended a number of seminars and presented papers. He has been published a few papers to his credit.
Foreword
Ancient Tamraltpta in the Rada region, a port town of wide reputation, had held for long a place of considerable distinction in the traditions of the country.

Though found mentioned in many sources, literary and archaeological, precious little has been done to bring out a detailed appraisal of this shot of glory now lost in oblivion.

It is really an Endeavour of deep passion and close attachment, being a native of the area, to bring out a work of appreciable value based upon sustained research and unabated labor unraveling from oblivion the picture of a place rich With many treasures of the life and culture flourishing in the area humming With sounds and activities of Wide variety. Though of alluvial formation human habitation had started here from a quite early age as stone implement of neo-litchis bearing from some spots around would hold, contacts with outer world had been established quite early as the pottery vases strongly reminiscent of ancient Hellenic and Egyptian affiliation recovered would prove. Further, quite a few terracotta figurines surfacing here are noticed to bear close stylistic affiliation to terracotta of similar type belonging to the Sindhu-Sauvtra (Harappan) tradition, Many historical information of later age bear out that Tamraltpta had remained a briskly active port of anchorage of vessals voyaging to or sailing from distant lands like Greece (re: The Dasa-Kumara charttas), Sri Lanka (Sinhala), Indonesia (Suvamadatpa and dabadtwtp) and China. Several Buddhist monks hailing from China, who had stayed in monasteries at Tamraltpta. have put on record some highly interesting details? about the life and cultural traditions of the people described with considerable warmth and appreciation. All such details held by archaeological discoveries and literary source stand to bear out a stretch of long existence of Tamraltpta as a rich and vibrant centre of civilization now irretrievably lost into oblivion.

In his lively exposition devoted to the Endeavour of recovering from that state of obliteration an account bringing about the lost glories of Tamraltpta cannot fail to evoke appreciation of a profound nature. Written in clear and simple language emitting the inner passion for those lost traditions, the work has quite deservingly gained for him the prestigious Ph. D. degree of our distinguished Alma Mater, the University of Calcutta and will undoubtedly be read with pleasure and profit. The Survey is quite comprehensive, bearing evidence of his wide study and close appraisal of all relevant sources, archaeological as well as literary. I am to put on record these few words in deep appreciation which I like to extend to the author with the wish that the readers of the work will not fail to gain a stimulant piece of study, opening up a vista of the lost memories of a stretch of life and activities which had enriched the traditions of India with glory of no mean order.

Preface
It has become very difficult to make minuter generalization about different dimensions of Indian civilization Scholars are quite aware of the limitations of their specific studies.

Among the other limitations are the kinds of emphasis placed on the approaches to the study of history of Tamraltpta as a microcosm of Indian civilization. All these studies are marked by considerable diversity and the research has been very scanty. Considering the limitations of the study, it seems relevant to explore the regional stereotypes in the context of ancient Indian civilization.

The present research work is devoted to the study of history, culture and antiquities of Tamraltpta (modern Tamluk, a Sub-divisional town in the district of Midnapur, West Bengal) -a place of ancient glory of India. The study adopts a comprehensive approach to emphasize the different features and discuss the characteristics common on the basis of all, available data-both literary and archaeological. This may bridge the credibility gap between ancient and modern of historical research.

The present study could not have become successful without the untiring encouragement and co-operation of several of my well wishers.

Words cannot adequately express my gratitude to my teacher Dr. P. K. Malty, Reader in History, Tamralipta Mahavidyalaya, Tamluk, Midnapur, who has been the guiding spirit behind this study for his timely advice, excellent scholarly guidance, patience and encouragement light from initial stages of this study to its completion. This thesis which is being Published of any Significance, due to his timely helps and careful Supervision.

My grateful thanks are due to Mr. Amit Kiran Deb, I. A. S. ( Ex-District Magistrate and Collector, Midnapur) and Mr. N. Hazra, W.B.C.S. (Ex District Relief Officer, Midnapur) for their abiding interest and co-operation.

b>Introduction
I. NATURE AND IMPORTANCE OF THE SUBJECT

The present work is an attempt to trace the history, culture and antiquities of Tamralipta. Identified with present Tamluk, a sub-divisional town in the district of Midnapur, West Bengal and located on the right bank of the river Rupnarayan, Tamralrpta has ever been remembered as one of the greatest city-ports of Southern Asia and a great centre of Buddhist culture and learning.

This study throws much light on the various aspects of society and culture of Tamraltpta since the proto- historic period. Though the importance of writing such history has been well emphasized throughout the world since the late 19th or early 20th century, in India this type of study on a large scale has been being carried out in comparatively recent years. This socio-cultural study of a particular zone of historical importance obviously helps one to have an idea of the total culture- traits of Indo-Pak-Bangladesh sub-continent.

SCOPE OF THE SUBJECT :

The first attempt to treat the subject on the basis of available sources to some extent is the publication of a collected work entitled "Itihaser Prekshitapaye Tamrolipta" where different authors have attempted to throw light on the history and culture of Tamralipta. P. C. Das Gupta, ex-Director of Archaeology, West Bengal in his brief work 'The Archaeological Treasures of Tamralipta'" furnishes important information relating to the ancient civilization of Tamraltpta especially of proto- historic period. S. S. Blswas in his ''Terracotta Art of Bengal"? has taken into consideration a number of ancient terracotta’s of Tamluk which throw sufficient light on the various' aspects of culture of Tamraltpta in the ancient period. P. K. Mandal, Hony. Curator of Tamraltpta Museum & Research Centre also throws fresh light on the ancient civilization of Tamraltpta by critically analysmg the terracotta’s of Tamluk in his recently published work "Interpretations of Terracotta’s from Tamraltpta. "

None of these works mentioned so far, is helpful to know the history, culture and antiquities of Tamraltpta in a detailed form. As there is no consolidated work on the proposed topic and as the materials have not been fully explored and historically treated, our aim, therefore, is to treat the topic with full justice by exploring all available data especially the archaeological findings discovered at Tamluk and its neighborhood and preserved mainly in Tamraltpta Museum and Research Centre, Tamluk, Midnapur. 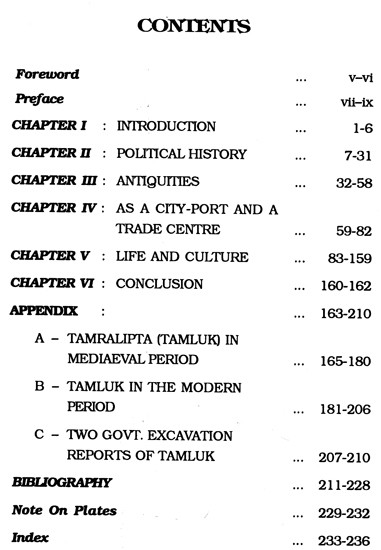 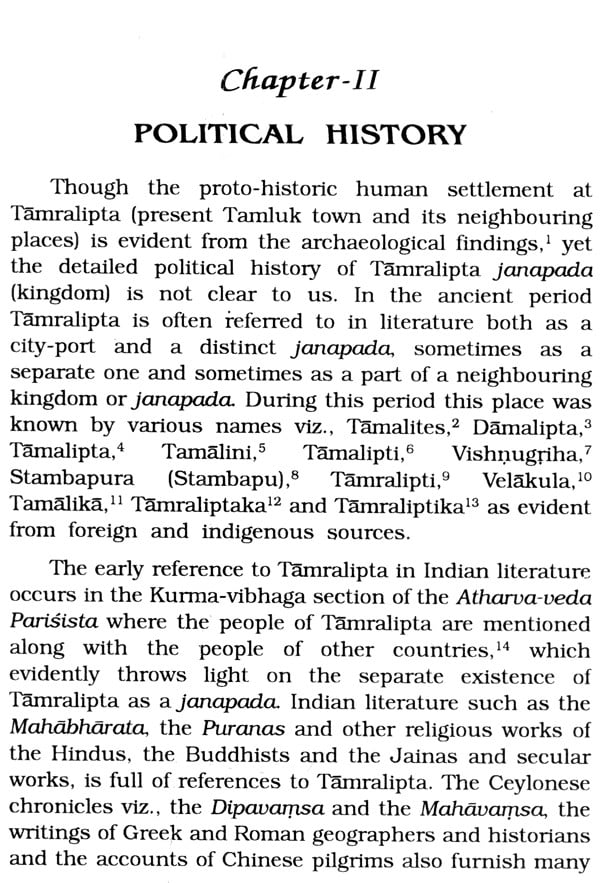 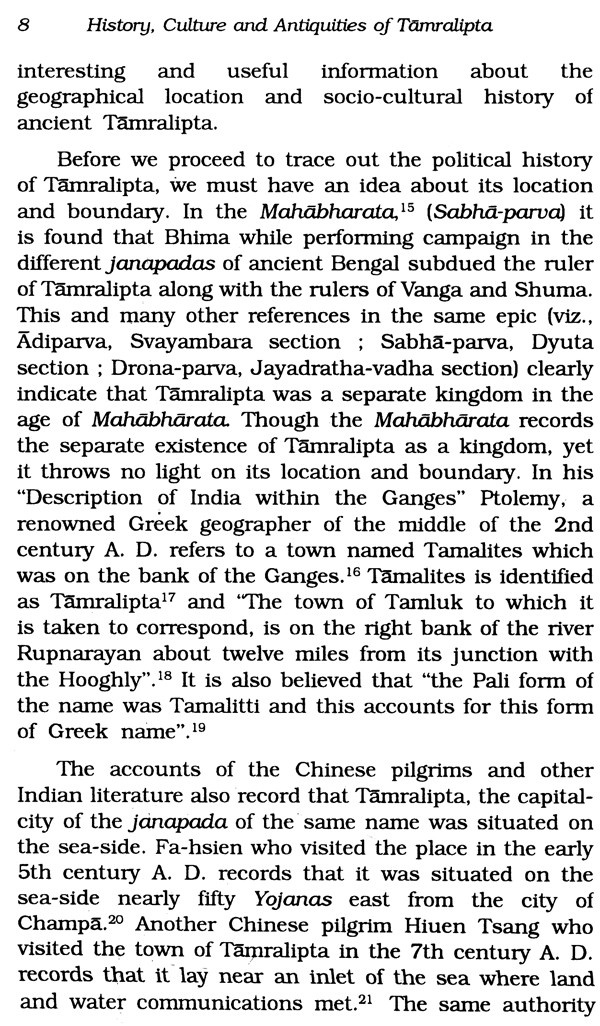 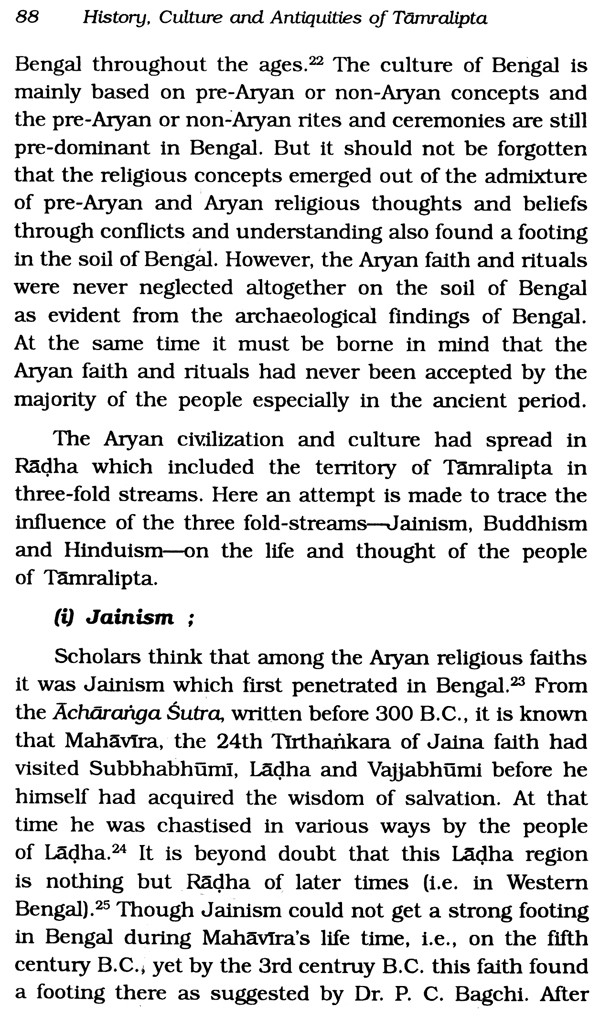 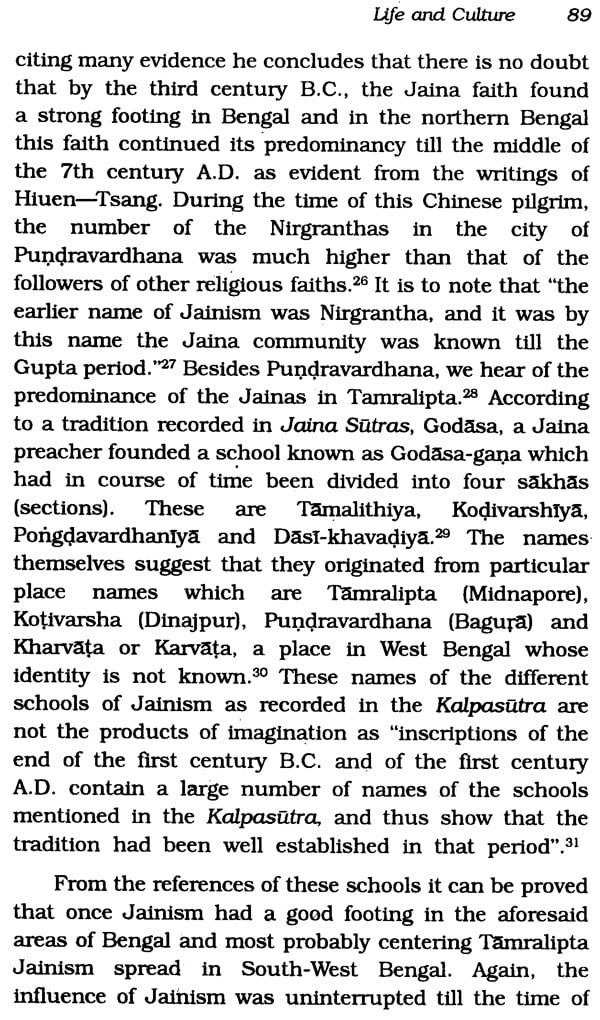 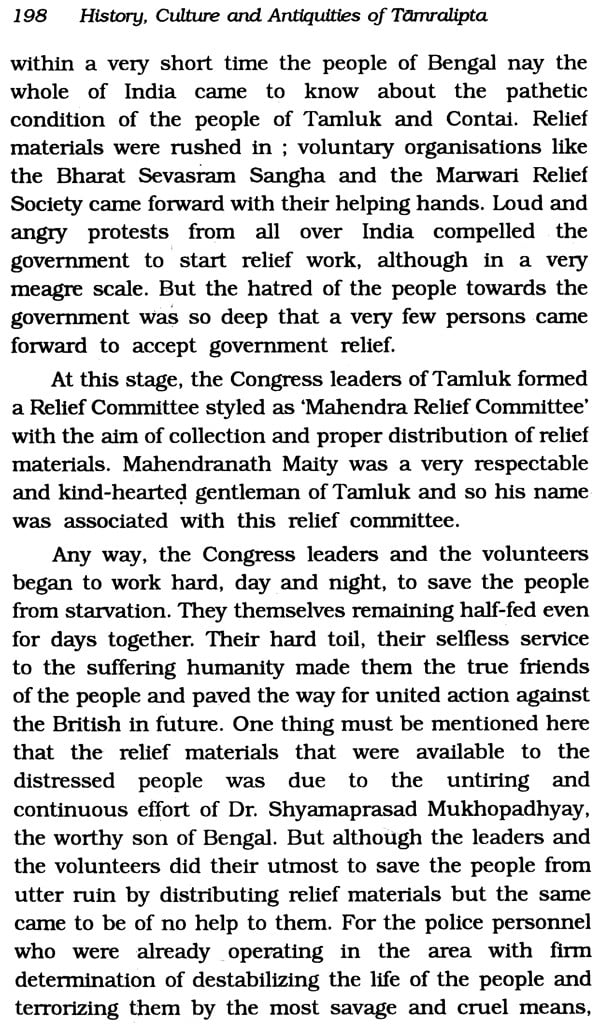 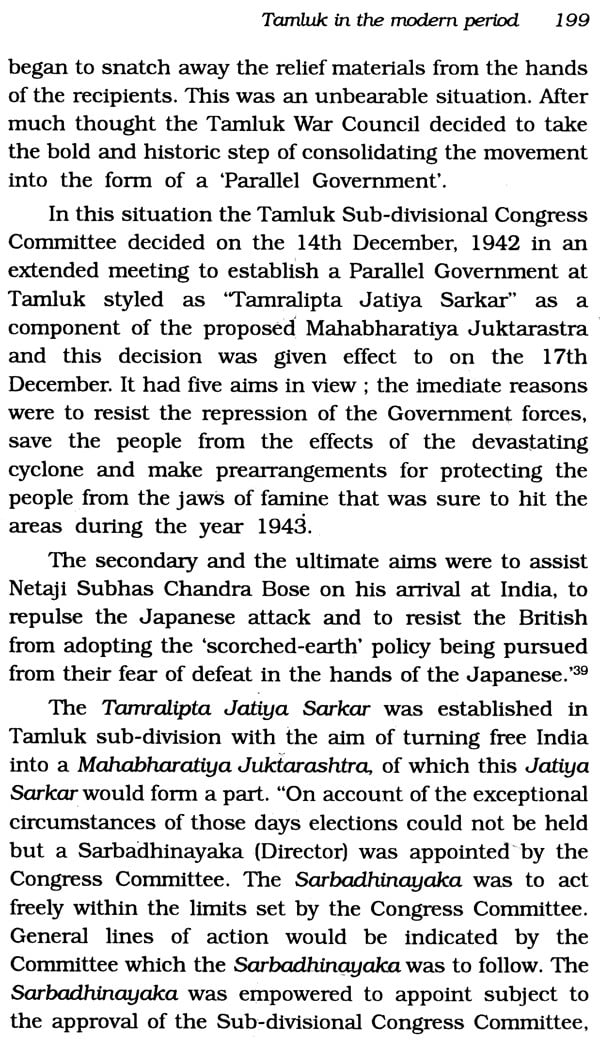 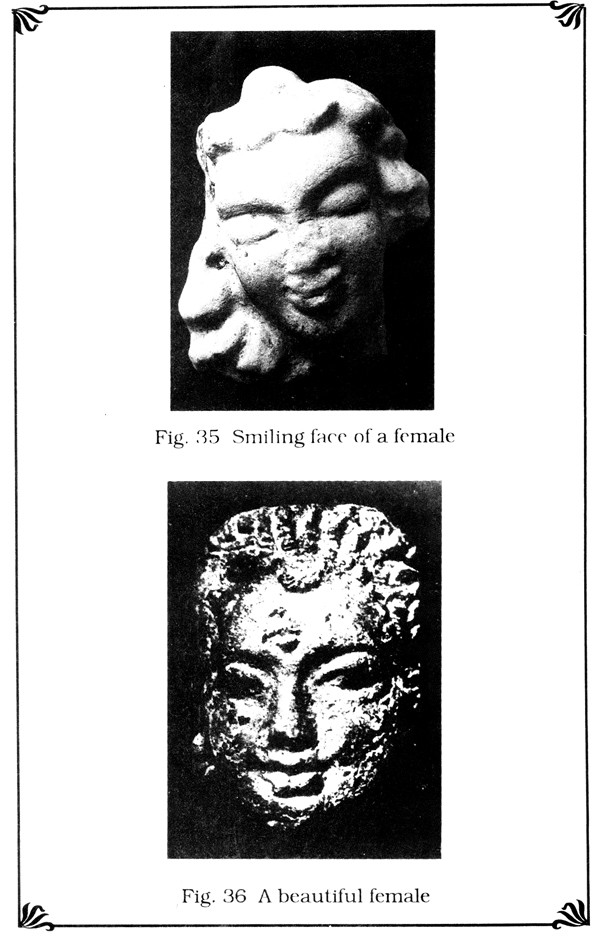 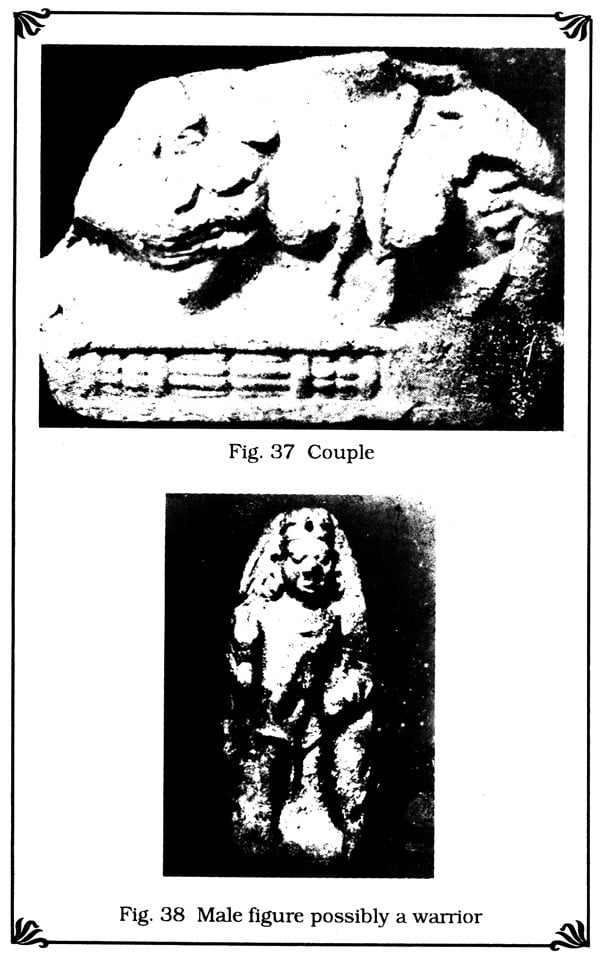