Hobson Jobson - A Glossary of Collquial Anglo-Indian Words and Phrases, and of Kindred Terms, Etymological, Historical, Geographical and Discursive 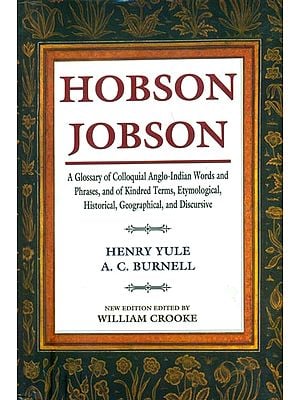 The objects and scope of this work are explained in the Introductory Remarks which follow the Preface. Here it is desired to say a few words as to its history .

The book originated in a correspondence between the present writer, who was living at Palermo, and the late lamented ARTHUR BURNELL, of the Madras Civil Service, one of the most eminent of modern indian scholars- who during the course of our communications was filling judicial offices in Southern and Western India, chiefly at Tanjore. We had then met only once-at the India Library; but he took a kindly interest in work that engaged me, and this led to an exchange of letters, which went on after his return' to India. About 1872-1 cannot find his earliest reference to the subject-he mentioned that he was contemplating a vocabulary of Anglo-Indian words, and had made some collections with that view. In reply it was stated that I likewise had long been taking note of such words, and that a notion similar to his own had also been at various times floating in my mind. And I proposed that we should combine our labors.

I had not, in fact, the linguistic acquirements needful for carrying through such an undertaking alone; but I had gone through an amount of reading that would largely help in instances and illustrations, and had also a strong natural taste for the kind of work.

This was the beginning of the portly double-columned edifice which now presents itself, the completion of which my friend has not lived to see. It was built up from our joint contributions till his untimely death in 1882, and since then almost daily additions have continued to be made to the material and to the structure. The subject, indeed, had taken so comprehensive a shape, that it was becoming difficult to say where its limits lay, or why it should ever end, except for the old reason which had received such poignant illustration: Ars longa, vita brevis. And so it has been wound up at last.

The work has been so long the companion of my horae subsicivae, Ii thread running through the joys and sorrows of so many years, in the search for material first, and then in their handling and adjustment to the edifice-s-for their careful building up has been part of my duty from the beginning, and the whole of the matter has, I suppose, been written and re-written with my own hand at least four times-and the work has been one of so much interest. to dear friends, of whom not a few are no longer here to welcome its appearance in print," that I can hardly speak of the work except as mine.

Indeed, in bulk, nearly seven-eighths of it is so: But BURNELL contributed so much of value, so much of the essential I buying, in the search for illustration, numerous rare .and costly books which were not otherwise accessible to him ill India; setting me, by his example, on lines of research with which I should have else possibly remained unacquainted; writing letters with such fullness, frequency, and interest on the details of the work up to the summer of his death; that the measure of bulk in contribution is no gauge of his share in the result.

In the Life of Frank Buckland occur some words in relation to the church-bells of Ross, in Herefordshire, which may with some aptness illustrate our mutual relation to the book:

It is said that the Man of Ross" (John Kyrle) "was present at the casting of the tenor, or great bell, and that he took with him an old silver tankard, which, after drinking claret and sherry, he threw in, and had cast with the bell."

John Kyrle's was the most precious part of the metal run into the mould, but the shaping of the mould and the larger part of the material came from the labour of another hand.

At an early period of our joint work BURNELL sent me a fragment of an essay on the words which formed our subject, intended as the basis of an introduction. As it stands, this is too incomplete to print, but I have made use of it to some extent, and given some extracts from it in the Introduction now put forward.

The alternative title (Hobson-Jobson) which has been given to this book (not without the expressed assent of my collaborator), doubtless requires explanation.

A valued friend of the present" writer many years ago published a book, of great acumen and considerable originality, which he called Three Essays, with no Author's name j and the resulting amount of circulation was such as might have been expected. It was remarked at the time by another friend that if the volume had been entitled A Book, by a Chap, it would have found a much larger" body of readers. It seemed to me that A Glossary or A Vocabulary would be equally unattractive, and that it ought to have an alternative title at least a little more characteristic. If the reader will turn to Hobson-Jobson in the Glossary itself, he will find that phrase, though now rare and moribund, to be a typical and delightful example of that class of Anglo-Indian argot which consists of Oriental words highly assimilated, perhaps by vulgar lips, to the English vernacular j whilst it is the more fitted to our book, conveying, as it may, a veiled intimation of dual authorship. At any rate, there it is; and at this period my feeling has come to be that such is the book's name, nor could it well have been anything else. 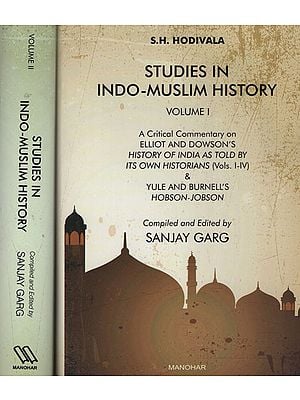 Studies in Indo-Muslim History - A Critical Commentary on Elliot and Dowson’s History of India as Told by its own Historians and Yule and Burnell’s Hobson Jobson (Set of Volume -2)
10.00 X 6.50 inch
$175.00 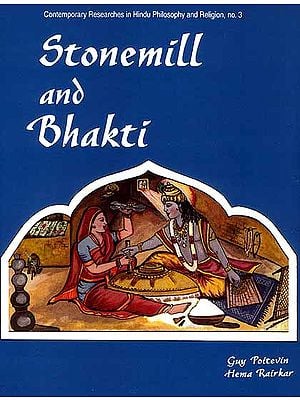