Jawaharlal Nehru saw 'culture' as the ability to understand the other person's point of view. So far as rituals and traditions go, such understanding should recall ages bygone, recapture, memories preserved and comprehend practices handed down the generations. Why were certain rituals prescribed and practised, why do they not survive wholly today, if at all - these are queries that are dealt with in this book.

The world has become a global village. However, our own villages where rituals and traditions originated and were initially practiced (and from where they were handed down) have withered or are withering away, if only from this perspective. Reassuringly though, interest is reviving even in our brethren living abroad as well as in our towns and cities; all of a sudden they seek their 'roots', and, more importantly, are frenetic in their wish that their own young ones get reconnected to their ancestors' land and its mores. This book may satisfy their curiosity.

After serving for 36 years in the Indian Administrative Service in Uttar Pradesh, USA, UK and Delhi, Muthusamy Varadarajan retired in 1991 as Secretary to Government of India. Post retirement, he was Member, National Minorities Commission, Executive Director, Chinmaya Mission and Chairman, Expert Committee, National Museum. He is now President, Osian's Connoisseurs of Art, an arts institution in India.

As Secretary in Ministries of Culture and Youth Affairs & Sports, he masterminded massive year-long Festivals of India abroad and Return Festivals, as also Bharatiyam' 89, with 50,000 children from all over India coming together to celebrate 'Freedom 40' and Nehru Centenary.

While in UK, Varadarajan edited and published Nadopasana One, essays on Indian music and dance. Recently, he has co-authored Handcrafted Indian Enamel Jewellery and was the cultural collaborator of Wisdom, 365 Thoughts from Indian Masters.

The writing of this book took me on a voyage back into my childhood and adolescence and handed me back to the era of advancing age. In the process, as I delved into events and incidents, revisited temples (kshetratana) and rivers and seas (teertha yatra), and festivals and celebrations, the flashback that memory vouchsafed to me aided and enthralled me.

Rituals had been an integral part of my life, from the time my father, often away on tour or engrossed in his duties as a policemen, after a day-long fast each month on the day of Kritigai in honour of Kartikeya, could not himself do the puja to the Lord, without which he could not break his fast. On the pandit's assurance that his son could officiate at this fascinating task, I was oftentimes commissioned, right from the time I was about seven, to do the puja. And, as I grew up, and my father was no more, my mother would have me perform the annual Rama Navami puja for Rama, her ishta devata.

And, of course, during the best part of my young life, travelling with my parents all over India, I had the opportunity to visit temples and to bathe in holy waters, go round sacred hills (giri pradakshina), have a glimpse of the Chidambara rabasyam at the Golden Hall of Nataraja, or witness the Kartigai lamp being lit at the peak of the Arunachala hill after a darshan of Bhagwan Sri Ramana. I have traversed many a village around Tiruchi and Thanjavur (in Tamil Nadu) with my sanyasin grandfather Gnananandendra Saraswati, as he stood before homes, intoning Bhavati bhiksham debi, and received alms. All these, coupled with the fact that my grandparents and uncles and aunts galore from both sides of the family sang stotras every morning in the most dulcet and appealing of ragas, my mother did Deepalakshmi puja every Friday for five decades and did asvatta pradakshina on Somavara amavasya, and my father sang lovely hymns in our mother tongue to his favourite deity Muruga (as the Tamils call Kartikeya), ignited a small spark spark in me very early on in life. The spark has endured.

Traditions handed down generations were explained to me; more importantly, they were observed by my parents and demonstrated to me in practice, by one or the other member of my vast joint family - traditions that were not of the Tamil or the Indian, but verily traditions of the salt of the earth the world over.

The best part of all this was that, invariably, my parents and elders explained to me the why and where for of each ritual or tradition. This is what led me to happily embark on this book. Half a century ago, when I sat for the competitive examination for the Civil Services, I had to write an essay on 'If Youth Knew, if Age could'. It is the same story here - thoughtless disbelief would give way to understanding if only the elders could supply the raison d'etre of things. And even if many rituals are, or can no longer be, observed as in days of yore, one would at least know why our ancients did. If this feeble effort of mine contributes to the dawn of that understanding, I would be more than happy. Far be it from me to mandate the performance of any ritual, or every ritual; but I would certainly say, "Perform or not any ritual, as you wish, but understand its significance and do it or ignore it."

My deep debt of gratitude goes to Alka Sinha who spend days and weeks researching for the material; to my learned friend Professor A. Sampahnarayan, formerly of Rashtriya Sanskrit Sansthan, for his monumental labour in going through my manuscript and assisting me with his incisive analysis and suggestions; to Dr. Varsha Das, the editor, for her patience; to my caring and wise friends Updesh Kaur Bevil and Santhanam Iyer who gave me valuable insights on rites and relevant texts of Sikha and Hindu lore respectively; to my son Tunku Varadarajan who, with his wife Amy, took time off his busy days and nights with the Wall Street Journal, New York to edit the final version that emerged from my computer; to Shashi Banerjee who patiently helped me go through the first edited version as well as refine and compact it; to my publisher Shobit Arya who was often exasperated but always cloaked it with an indulgent smile; to my children Rathi, Sunit, Nandini and Siddharth and to many friends whose patience equaled their trust in me.

I dedicate the book to my parents Lakshmi and Ombalapady Appasamy Muthusamy, without whose care, concern and personal example, my education, formal and non-formal, would have remained incomplete.

India, home to one of he most ancient civilizations, is a unique example of cultural and geographical diversities. Dissimilar cultural practices are deeply rooted in people's daily lives even in the 21st century. Indian history is the fruit of geography, and geography the root of history. The history of several millennia has merged with phenomenal geographical variations to create the incredible India of today.

India is incredible in its landscapes, and he people who adorn her. Its rituals and traditions sculptures and paintings' dance, music and theatre; handicrafts, fairs and festivals; monuments and manuscripts; and its varied cuisine-each is a definite statement that only India can proudly pronounce.

Myriad streams and rivers have been flowing for centuries in their own special terrain, sometimes forceful, sometimes gentle. Despite all kinds of obstacles, they flow on. When these waters reach the ocean, they mingle, and become one huge oceans. Similarly, these diverse, astonishingly rich and colourful cultural currents create a harmonious hymn known as India, even as they retain their unique individual identity.

Traditions are not mere dogmatic beliefs. They include religious rites, habitual actions and customs of a community or a group of people who live together at the same place. Religion in its pure form is highly individualistic but when it is performed as a ritual, the whole community participates in it. In the magico-religious ceremonies of the Vedic Aryans, rituals were combined with myths. They continue to be the same in the 21st century however, a modern Indian is free to exercise his/her freedom of choice. As a result one finds variations in rituals from place to place, and from person to person. It is no longer a rural-urban divide. It is either a choice or societal pressure. But they survive indeed.

The author has covered a large number of rituals and traditions in the context of the life cycle. This cycle begins when the life is still in the mother's womb. Innumerable ceremonies are performed throughout the journey from womb to tomb. He has extensively quoted from Sanskrit and Tamil literature, both the which are ancient; the latter being his mother tongue. Due to cultural diversities some stages of life have interestingly different rituals and beliefs. Indians in general love to celebrate, at time even death. 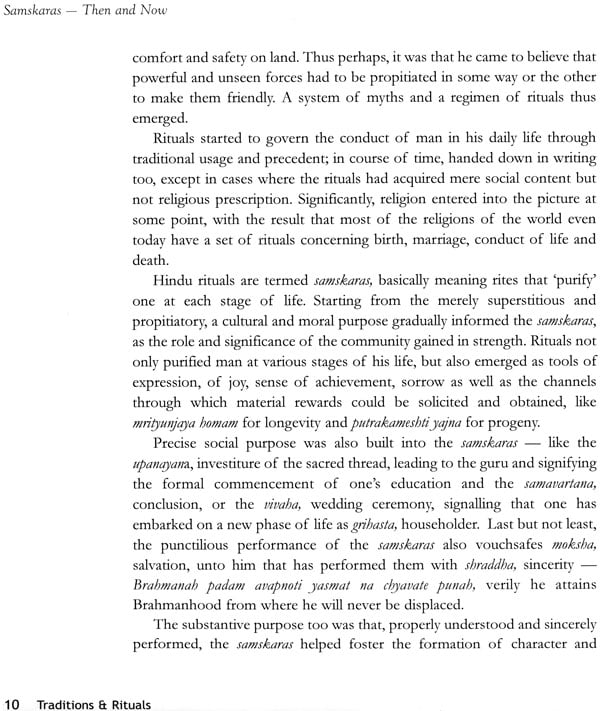 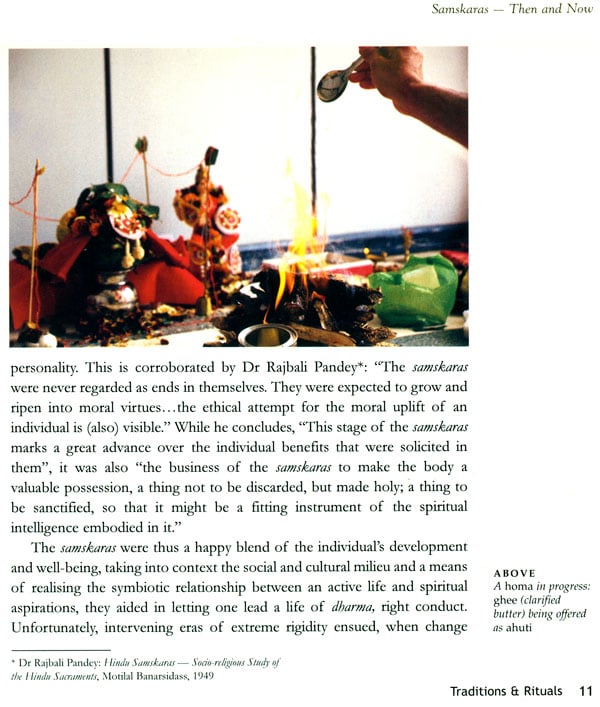 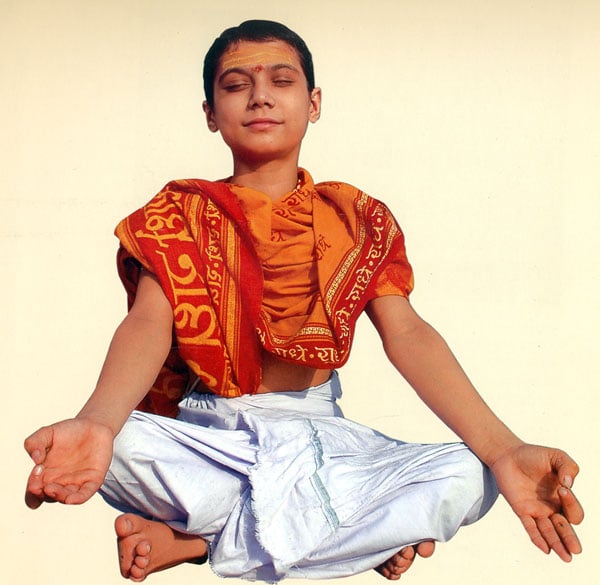 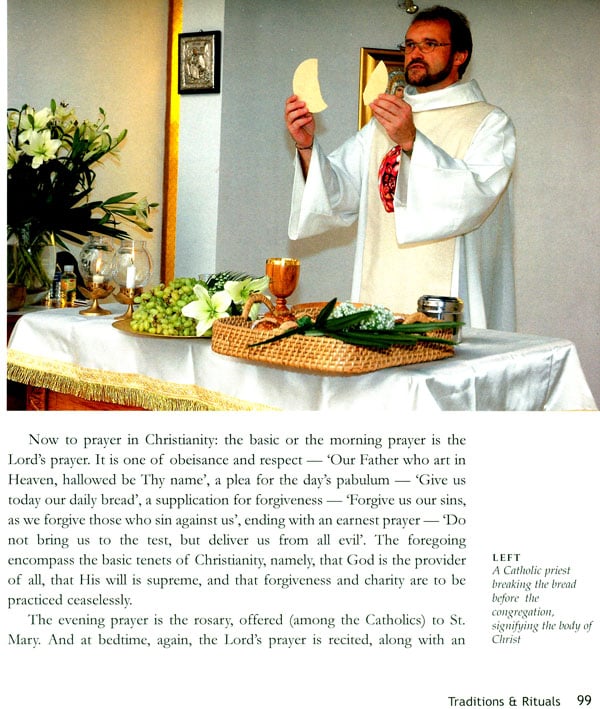 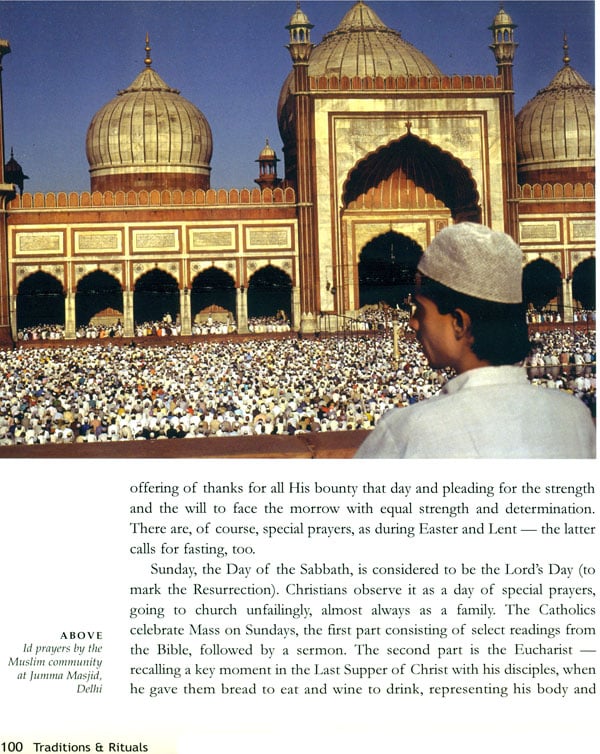 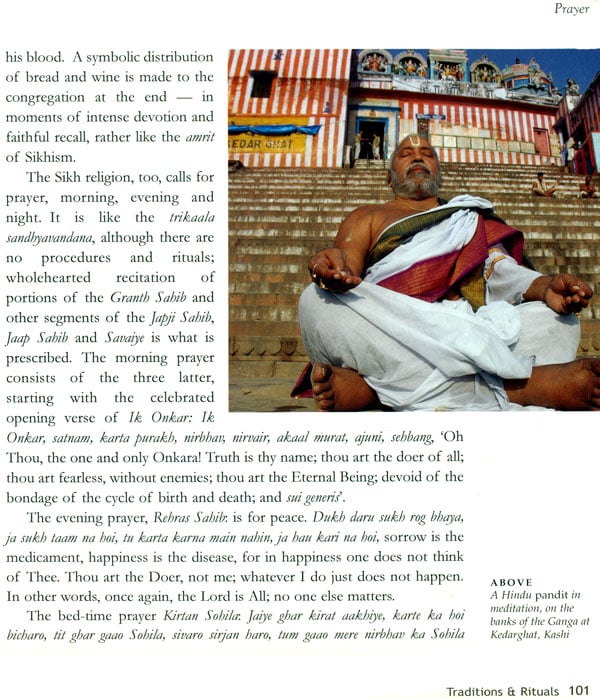 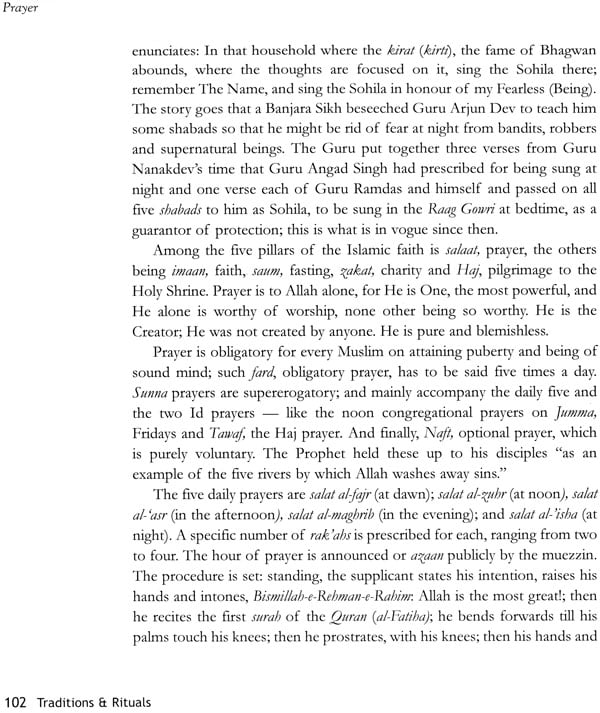