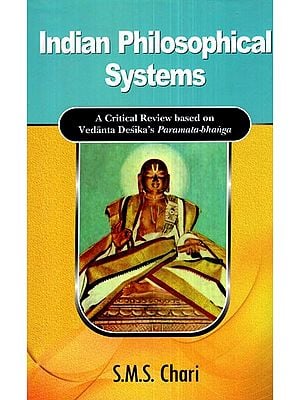 This scholarly work of Dr S.M.Š. Chari's deals with the critical review of seventeen philosophical systems as presented in an important philosophical treatise of the thirteenth century titled Paramata-bhanga contributed by Vedānta Desika, an illustrious successor to Rāmānuja, who is the chief exponent of Visiştādvaita Vedānta.

This scholarly work of Dr S.M.Š. Chari's deals with the critical review of seventeen philosophical systems as presented in an important philosophical treatise of the thirteenth century titled Paramata-bhanga contributed by Vedānta Desika, an illustrious successor to Rāmānuja, who is the chief exponent of Visiştādvaita Vedānta. The main objective of Paramata-bhanga is to establish that Visiștādvaita is a sound system of philosophy as compared to the several other Non-Vedic as well as Vedic schools and also Vedānta schools developed by Sankara, Yādavaprakāśa, Bhāskara, and other exponents of post-Rāmānuja period. The original text written in Manipravāļa (a mixture of Tamil and Sanskrit) language contains, besides a brief account of the fundamental doctrines of Visiștādvaita. The schools covered are Cārvāka, Buddhism, Jainism, Sānkhya, Yoga, Vaišeșika, Nyāya, Pūrvamīmāṁsā, Pāśupata, Śabdabrahma-vivartavāda, and Advaita Vedānta.

Among the extant philosophical classics, Paramata-bhanga is a unique work. Realizing the importance of the Paramata-bhanga for the comparative study of Indian philosophy, late Dr Chari tried to give a lucid exposition of this treatise in English. This volume, which is the first of its kind, would be invaluable for students of Indian philosophy in general and Visiştādvaita in particular.

VEDĀNTA DEŚIKA, an illustrious successor to Rāmānuja, wrote V two important philosophical treatises titled Tattva-muktākalāpa and Adhikarana-sārāvalī, devoted primarily to establish that Visiştādvaita Vedānta is a sound system of philosophy. He also contributed another important philosophical work under the title Paramata-bhanga in which he presents a critical review of the main tenets of sixteen schools of thought covering the non-Vedic schools such as Cārvāka, Buddhism, Jainism and also Vedic schools such as Nyaya, Vaisesika, Sankhya, Yoga, Pāśupata, Pūrvamīmāṁsā, Vaiyākaraṇa, Bhāskara, Advaita, and Visiştādvaita. The main purpose of this work is to show how Visiştādvaita Vedānta expounded by Śrī Rāmānuja on the unquestionable authority of the Upanișads and the Vedāntasūtra of Bādarāyaṇa is the soundest system of philosophy as compared to all other Indian philosophical schools of thought, including Advaita Vedānta of Sankara as well as other Vedānta schools which were in vogue prior to Rāmānuja and those which were developed later. This is a unique classic since in one compendium Vedānta Deśika gives a brief exposition of the main tenets of all the Indian philosophical systems including Vedānta and highlights their merits as well as defects.

In two of my earlier publications, I have dealt with Tattvamuktā-kalāpa and Adhikaraņa-sārāvali and justified the claim of Vedānta Desika that Visiştādvaita Darśana is a sound system both on philosophical and logical grounds. I have now taken up the study of Paramata-bhanga to demonstrate through a critical review of all other schools of thought including the Vedānta schools, how Visiştādvaita can be regarded as the soundest philosophical system.

The original text is written in Maņipravāļa, which is Tamil language intermixed with Sanskrit words in a terse style, not easily comprehensible. The statements expressing the prima facie views of the exponents of the concerned schools of thought and also the criticisms against them are brief and cryptic, but significant with deeper implications. In order to make it accessible to the modern scholars interested in the comparative and critical study of Indian philosophy, I have attempted to present it in English.

In order to enhance the value of this treatise, I have drawn material from the source books of the different Darśanas and also included the details of the criticisms furnished in other works of Desika such as Tattva-muktā-kalāpa, Sarvārthasiddhi, Nyāya-siddhāñjana, Nyāya-parisuddhi, Seśvara-mīmāṁsā, and Satadūṣaṇī. 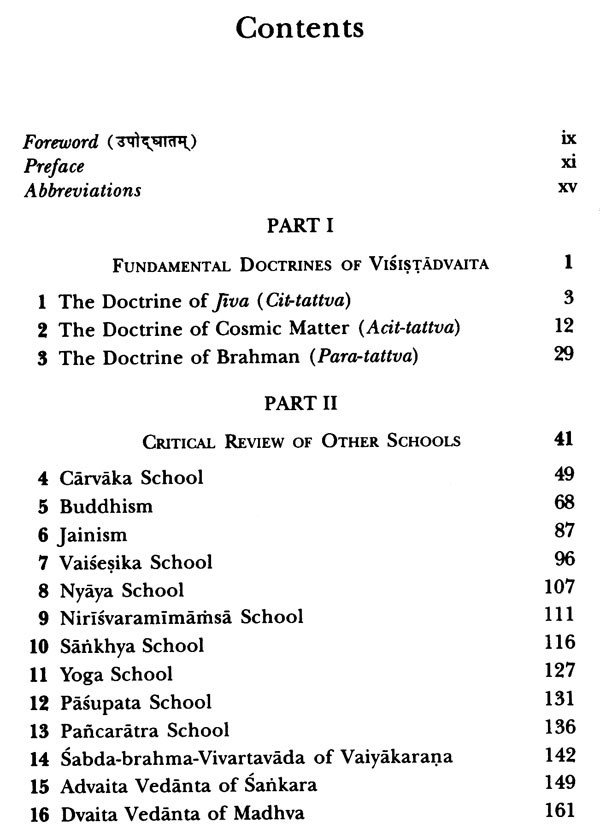 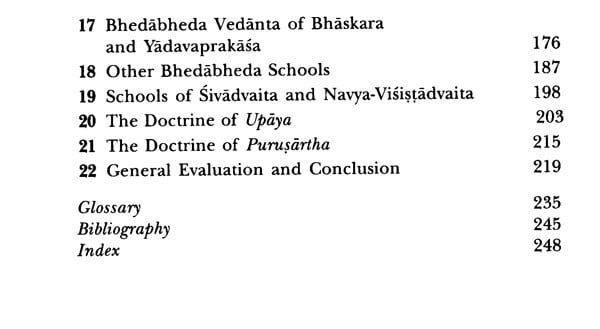 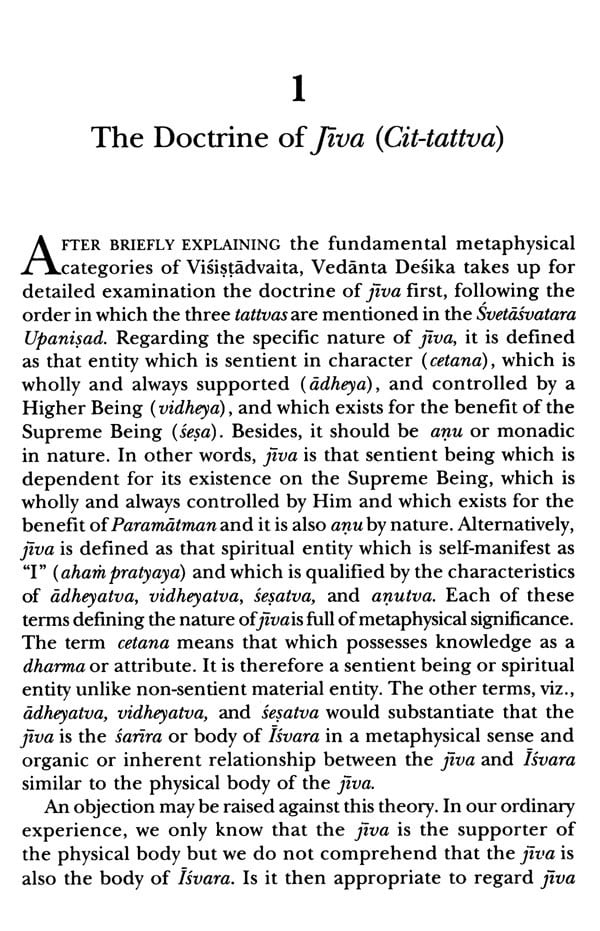 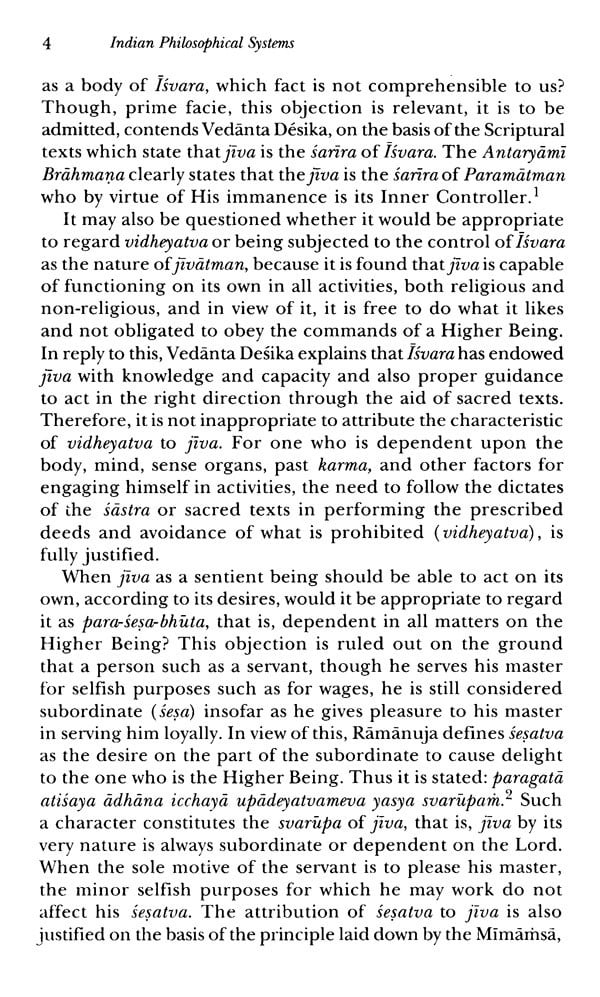 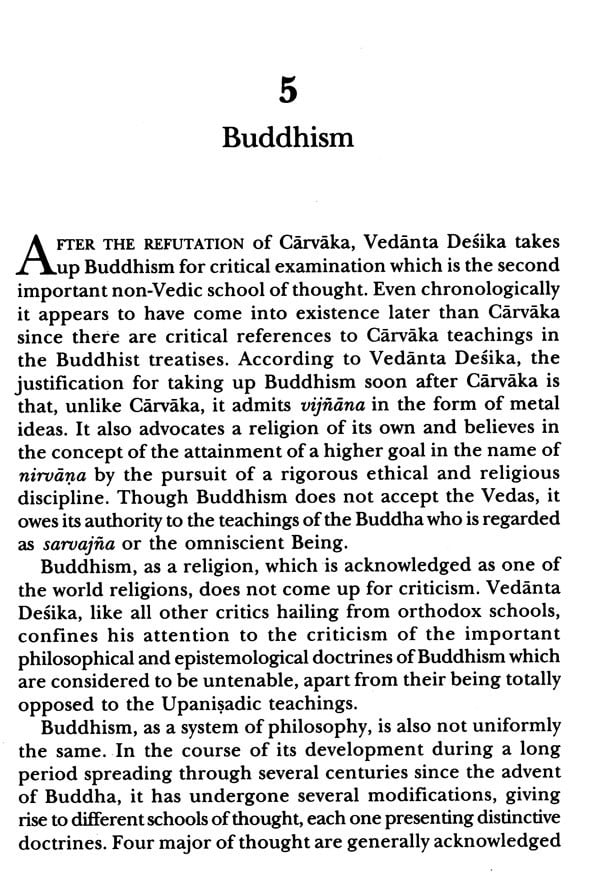 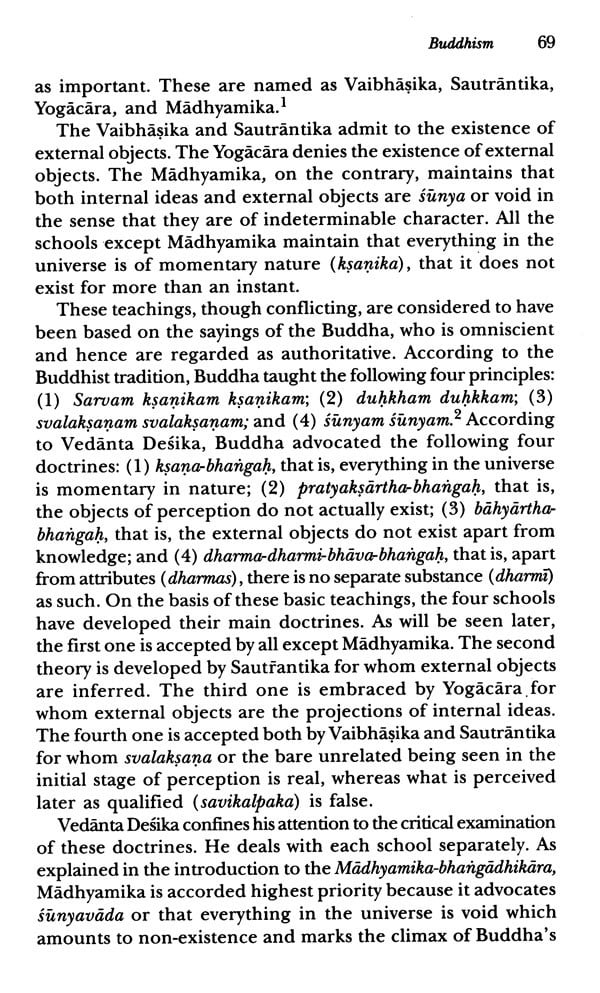 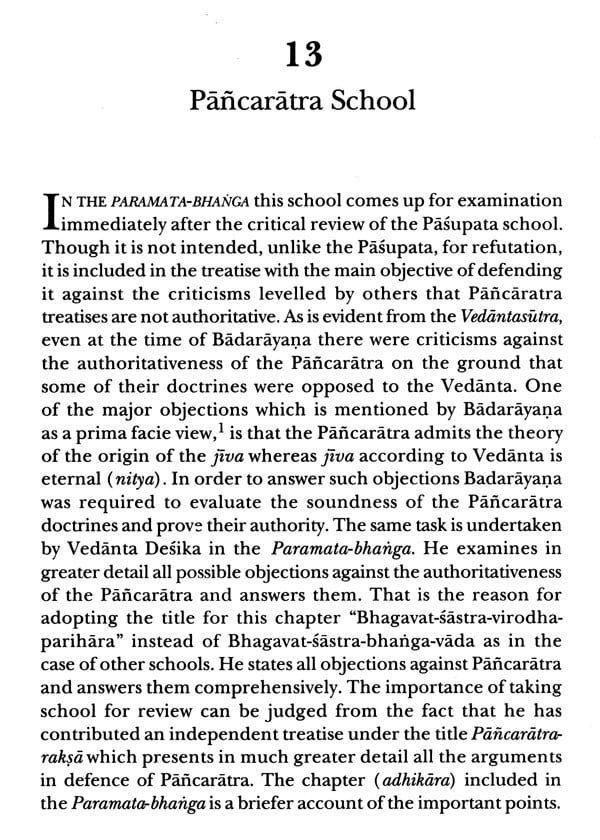 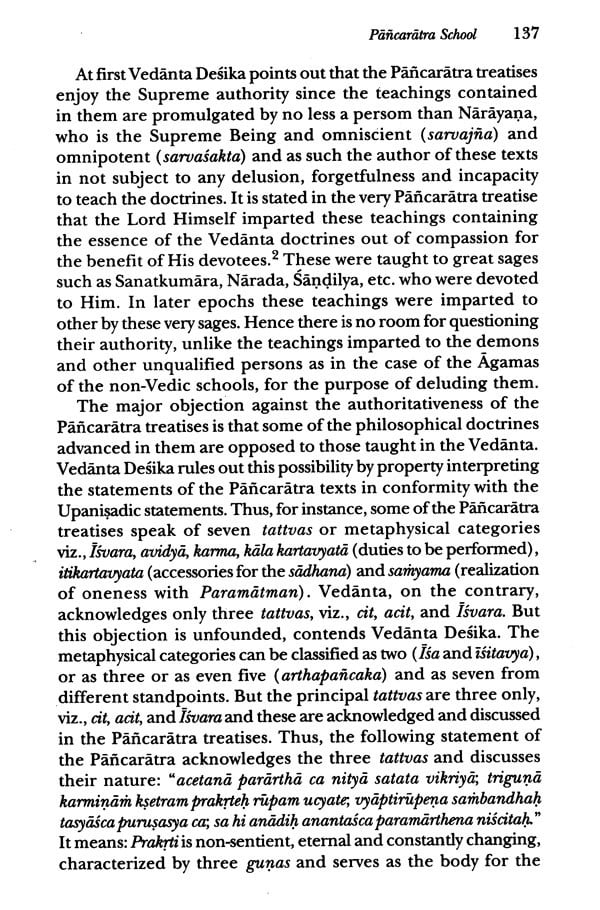 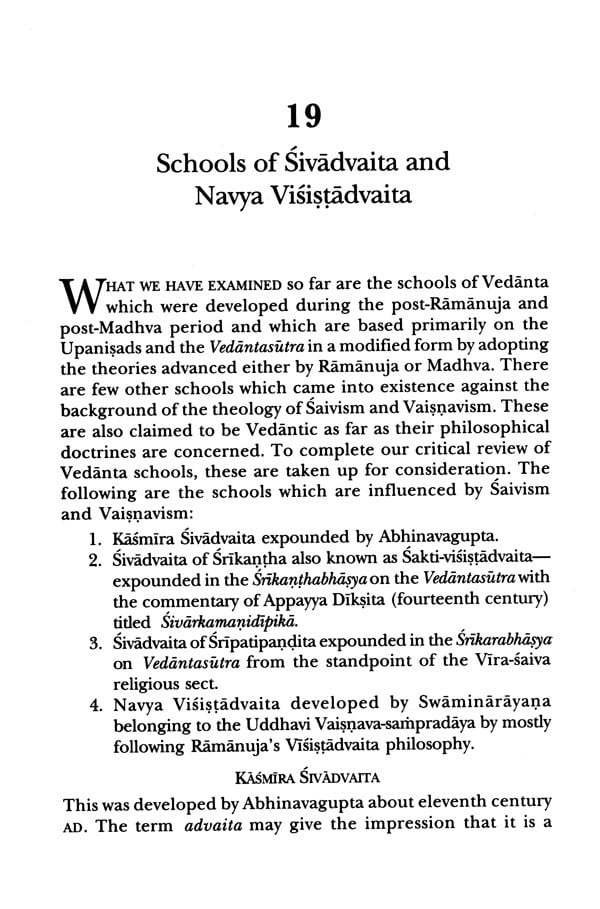 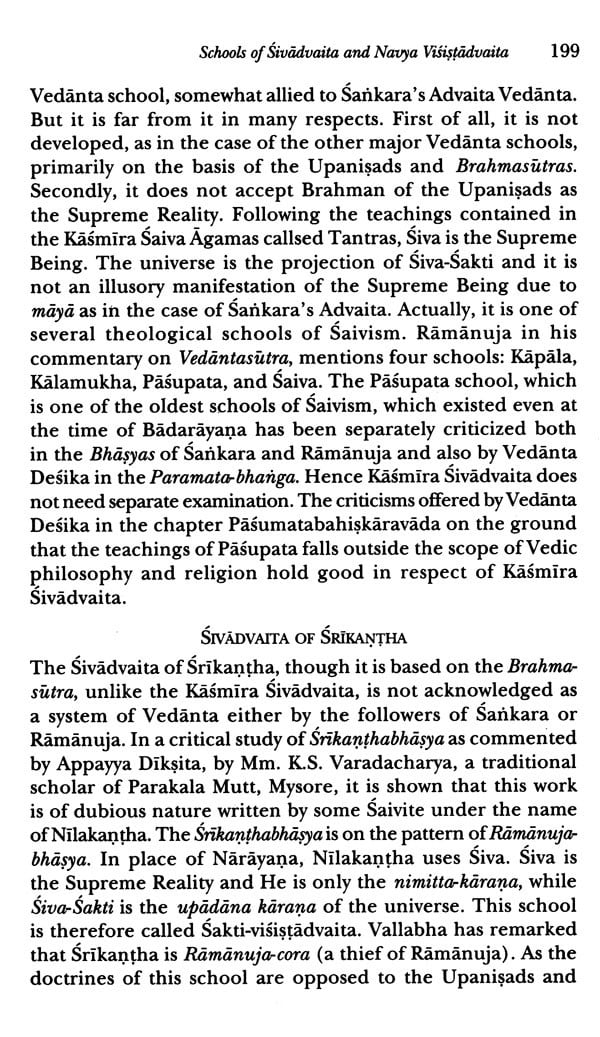 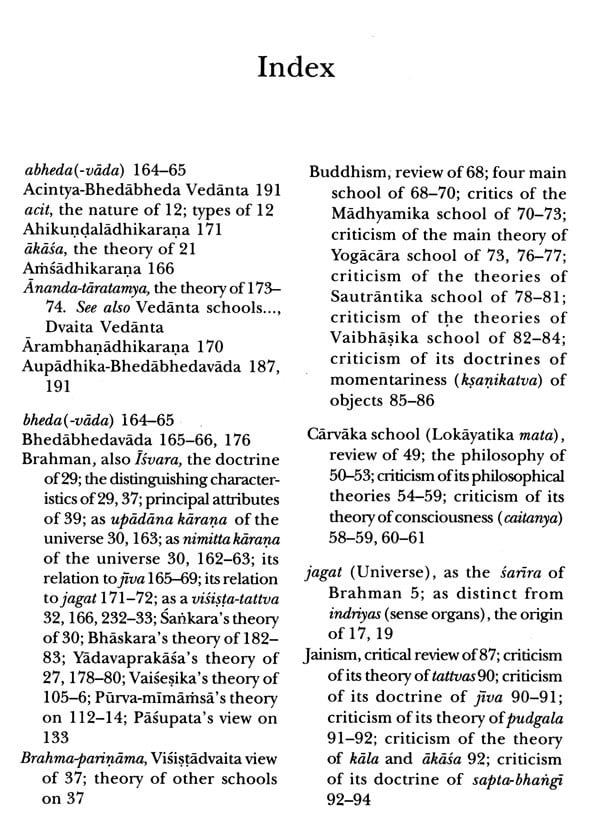 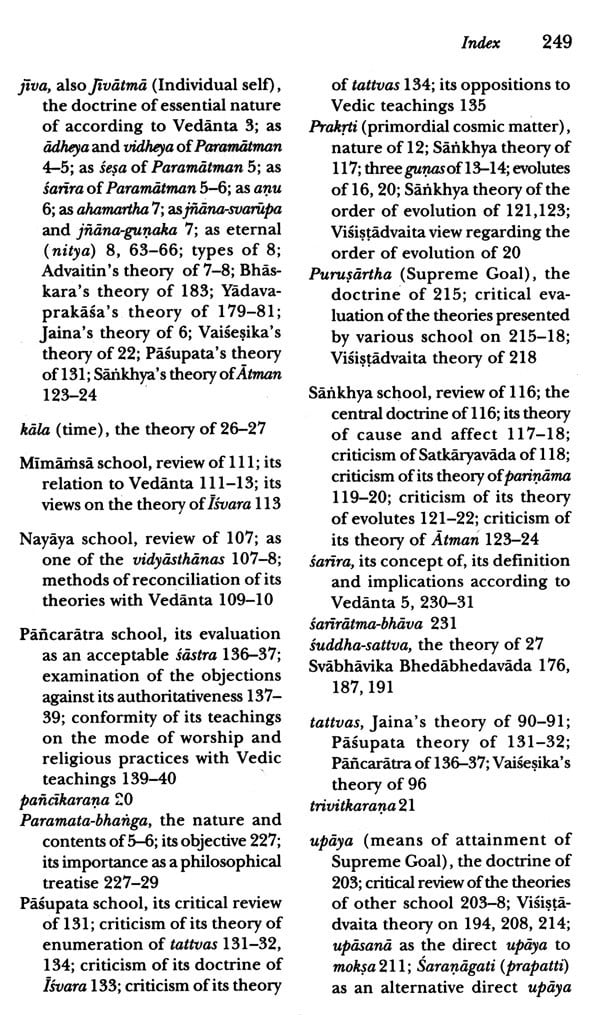