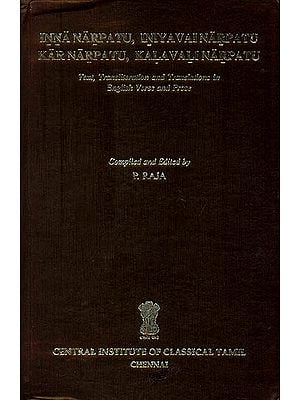 $29.00
Ships in 1-3 days
Notify me when this item is available
Save to Wishlist Send as E-card Share by Email
Foreword

The Tamils may be justly proud of the fact that Tamil has won the status of a Classical language, the status it richly deserves and should have got long, long ago. The Central Institute of Classical Tamil (CICT), established in Chennai, has mapped out various plans including preparation of definitive editions of forty-one Classical Tamil texts and translation of these works into English and other major European languages as well as into major Indian languages and writing of a historical grammar of Tamil. Language being the autobiography of a people, our objective is to preserve and safeguard the invaluable treasure of the literary compositions in our language. If only we could delve into our past and recover the riches and wealth of the mighty treasure trove of Classical Tamil poetry, we will be amply rewarded by its lofty poetry, the poetry that strengthens and purifies the holiness of heart's affection and enlarges our imagination. Apart from these, reading the ancient Tamil texts such as Tolkappiyam, Ettuuokai, Pattuppattu, Tirukkural etc., provides a foundation for scholarship for the present and in this sense they do provide enlightened education.

It is heartening to write this foreword to the series of publications brought out by CICT, which I am sure, will do full justice to the masterpieces in Tamil without compromising on the quality of production. The Cankam corpus being a repository of our glorious culture, it behoves our present and future generations to study them and to convey their message and the vision of life embodied in them to the public at large. Let me, therefore, commend the series to the enlightened beings the world over.

This volume is a collection of four different, but allied, anthologies of lyrics composed by four poets. These poems - Inna Narpatu, Iniyavai Narpatu, Kar Najpatu and Kalavali Narpatu - form a part of a large group of poems called Patinenkilkkanakku which belong to the later Sangam period. These are supposed to be didactic in nature, teaching the public the rights and duties of citizenship by offering moral precepts and conduct on which to base our life, thereby laying a foundation for a good and healthy society. It ought not to be understood that these poems merely preach; there are poems which talk of the exploits of soldiers, battles fought valiantly for saving the reputation of their homeland, and extremely fine-tuned love-lyrics. The twin functions of genuine poetry are delight and instruction (dulce et utile) and the lyrics in this volume stand ample testimony to it.

The present volume aims to bring out such of these riches to the non-Tamil audience by means of translations: two in verse and one in prose. It is hoped that this will go a long way in spreading the glory and grandeur of the Tamil language and Tamil people.

I am thankful to the Department of Translations of the Institute and the Publications Division for the efforts they took in coordinating the work leading to the publication of this handy, attractive volume. The Hon 'ble Minister of State for Human Resource Development and Vice- Chairman of the Central Institute for Classical Tamil has written the foreword which lends grace to this present volume. I am indeed most happy to express my sincere thanks and gratitude to her.

From time immemorial man has been fascinated by stories and songs - the two ways of expressing one's thought. Like every other nation, the nation of the Tamils was enamoured of songs and stories. The Tamils had a song for every occasion. They had a proverb to tell now and then which usually encapsulated a story or a legend. Since stories needed greater attention and better understanding, the Tamil folk resorted more to songs for they were aware that the music embedded in them would make their listeners rivet their attention to the song's content. Perhaps that was the reason why there was a song for every celebration - marriage songs that sang highly of the union of the two souls, erotic songs that whispered of the union of the body, lullabies that lulled the child in the cradle into sleep, workers' songs that lessened the monotony of their labour, songs of joy to enjoy their leisure, and finally mourning songs in praise of the dead.

To the poets all things on earth are grist to their ever grinding mill. Anything serious or funny inspires them and they are ready to burst with a song. What the storytellers did through their stories and legends, the poets did through their poems and songs. That is to say they not only entertained but also instructed. And this is what we call 'Tamil Wisdom'.

Be it war or love, the two major themes in ancient Tamil Literature, the poets sang of them with equal ease and showed their calibre in many verse forms. The sculptures we come across in the ancient temples of the Tamils serve ample testimony to the fact that the Tamils were good at the battlefield.

The earliest available work in Tamil, Tolkappiyam, throws light on the life of the Tamils in the Tamil country. And the ancient Tamils classified the subject (Poruly of their literature under two general headings - Akam and Puram.

In fact, Porul signifying the substance or the subject of any literary composition occupies a unique place in the Tamil language. The first of its two main aspects, Akam, meaning the internal or subjective, deals with psychology in all its aspects of love with footnotes on its varied emotions, incidents and accidents. To say that it depicts the relationship between lovers is no exaggeration, which may in many cases extend to their pillow talk. Puram is objective and deals with a plethora of aspects of human society primarily of war and the martial exploits of the people.

While it is true that most of the works that belong to the Carikam period made their stress either on love or on war, it is also true that these works made passing references to the ethical values of life. Some touch upon the rules or principles of behaviour. Yet, Tamil scholars unanimously agree that no work belonging to the Carikam period is completely devoted to ethics.

For the first time, in the whole gamut of Tamil Literature, one comes across works purposely written to show man the right path and put him on the right track. Such works are found in the purposefully read anthology, popularly known as Patinenkilkkanakku meaning Eighteen Minor classics. Pati-nen-kilk kanakku is listed along with the other two anthologies, viz, Pattuppattu (Ten Idylls) and Ettut-tokai (Eight collections). Of these three eminent anthologies, Pattuppattu and Ettut-tokai belong to the Carikam period, while the Pati-nen-kilk kanakku works belong to a later period. Some scholars believe that the latter also belongs to the Carikam period.

During the period of Buddhist and Jain glory, courtiers and scholars preferred to write in Pali, Prakrit and Sanskrit languages (as it is done in English today) with the ulterior motive of carrying their message to the learned world of that day. And the Tamil poets too showed their interest in their ethical principles true to the spirit of the times. And the result was an anthology of eighteen minor didactic works.

. Kalavali Narpatu deals with the battlefield action and the author revels in images of slaughter and of the flow of blood.

As literature is the mirror of the age, these works throw ample light on the everyday life of the ancient Tamils. They are records of our past, for the Akam works talk at length of the Tamils' love life and the Puram works of their valour. And the Aram works simply speak of the glory of the Tamils who preached their lofty thoughts to the world and tried to live what they had preached. In short these great effusions from the great minds of yore are the real time- machines that catapult us to the past and make us see for ourselves the culture of our ancestors.

Four of these eighteen works - Inna Narpatu, Iniyavai Narpaiu, Kar Narpatu and Kalavali Narpatu - are usually grouped together under a common title Nanarpatu, meaning Four Forties. There is nothing in common among these four works except that each of them contains forty venpa stanzas excluding the invocation. Written by different authors at different times, no two of these four speak of the same subject. As classified earlier Poykaiyar's Kalavali Narpatu (Battlefield Forty) belongs to Puram poetry, while Madurai Kannan Koothanar's Kar Narpatu (Monsoon Forty) belongs to Akam poetry. The rest, Putan Chenthanar's Iniyavai Narpatu (Delectable Forty) and Kapilar's Inna Narpatu (Unpleasant Forty) belong to didactic poetry, though the former means what is all pleasant in life and the latter what are all unpleasant.

The Forty verses of Kar Narpatu talk of the rainy season. The heroine of these verses anxiously awaits the arrival of her hero who had gone away on business, but promised to return at the beginning of the rainy season. The appointed time came but there was no sign of the hero's coming. Through realistic and lovely similes, the arrival of the rainy season with the beauty of the seasonal fresh blooms of the pastoral lands is admirably portrayed. Love-sickness, misunderstanding of the lady-love, her friend's words of comfort, and the dutiful lover with his lady-love still on the back of his mind, with a pinch of eroticism all these make this work highly readable.

Kalavali Narpatu gives a graphic picture of a typical battlefield, with an accent on the ephemeral nature of the world in accordance with the tradition of the age. The Chola King Koccenkanan, the proud possessor of the perennial river kaviri, a high resounding war drum, and a valiant army defeats his foe, a Chera King, and emerges victorious at a place called kalumalam. Packed with similes, the poems describe the bloody field, the beasts, the drum and the soldiers. At times humorous, at times funny depending upon the situation, the poet raises a doubt in us, that is to say, if there is any other war poem in world literature wherein its poet reveals through comedy a revolting and horrible battlefield.

Inna Narpatu and lniyavai Narpatu contain constantly quoted verses for both the works speak of the ways of the world and also give friendly advice. The first enumerates the things that cause pain and thereby disappointment and the second lists the things that are supposed to yield abiding pleasures to humanity.

In short, each of these works, is a conglomeration of life in all its aspects. Full of amiable and amicable suggestions with apt and lovely images, this work speaks of the grandeur of the Tamils and their lofty thoughts, creating in the mind of the reader, in a new way, pen pictures without his knowing that he is reading poetry.

These four individual works are presented in a single volume for the purpose of making them appear impresive in a book with reasonable thickness and elegance in conformity with the other CICT publications of this series. 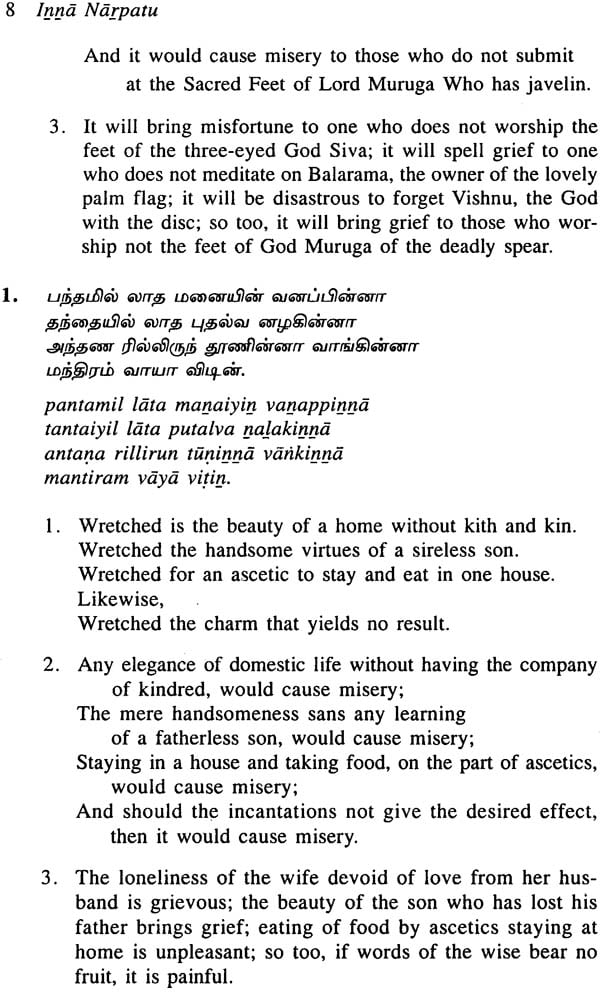 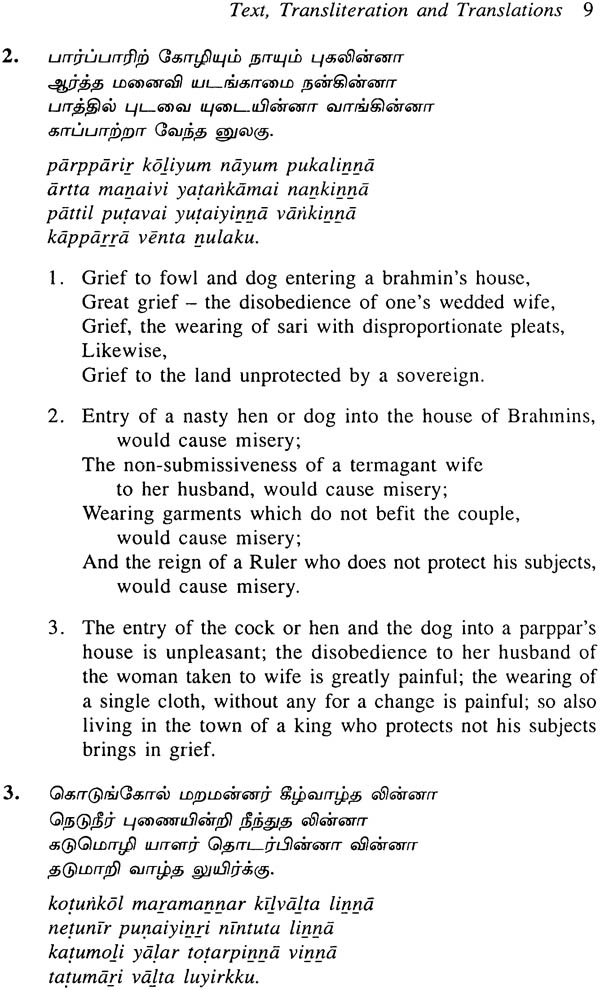 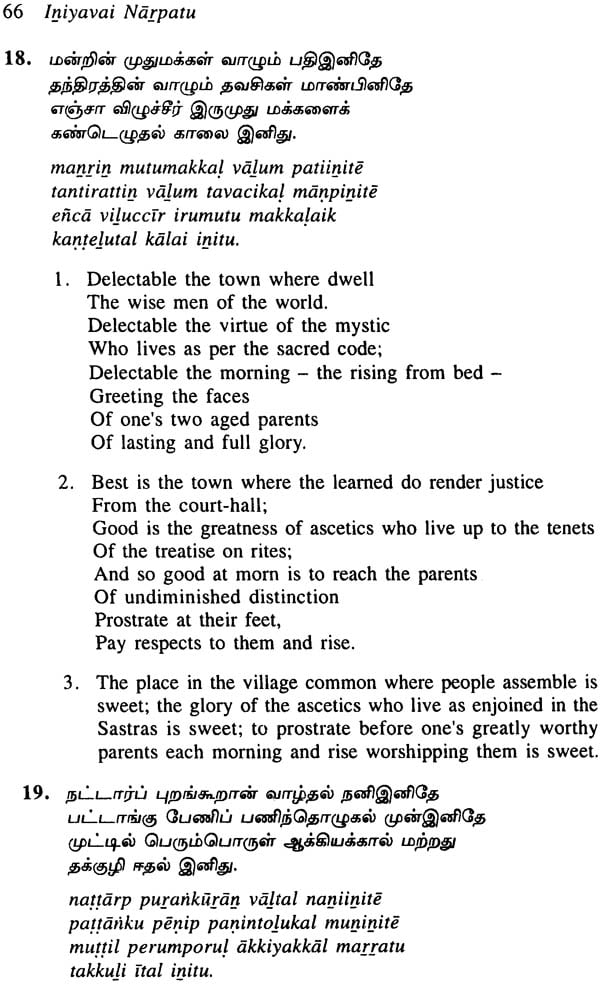 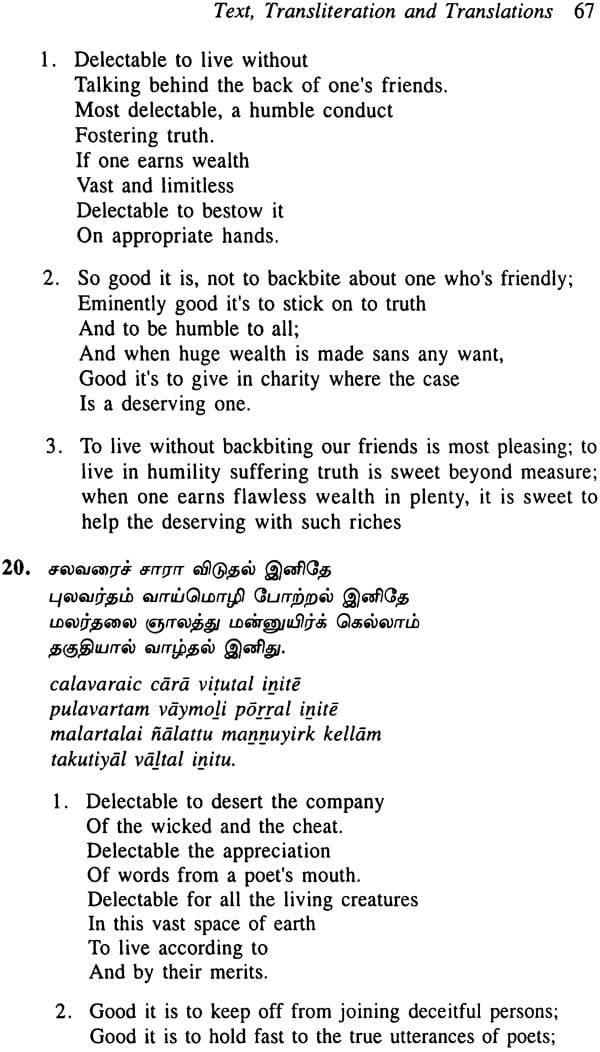 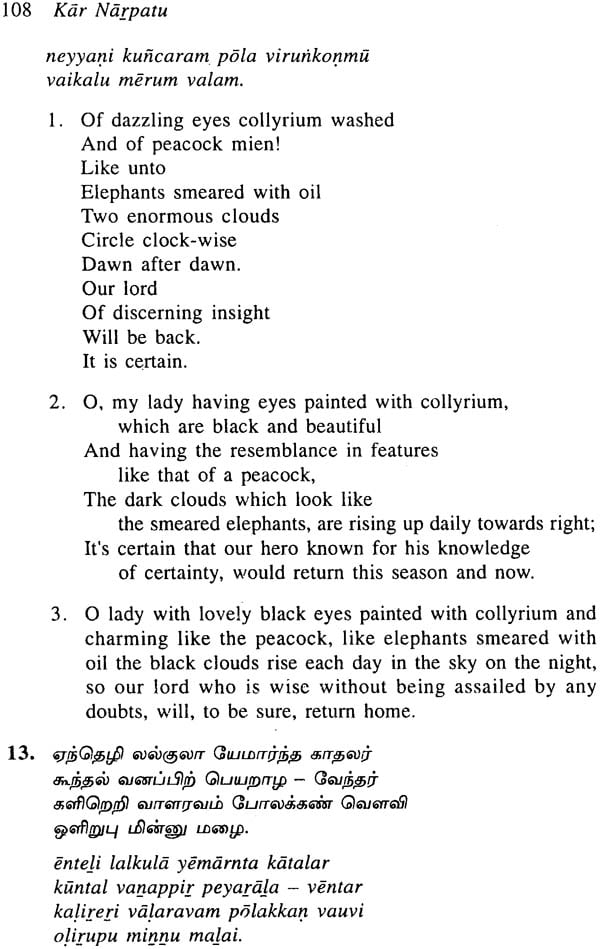 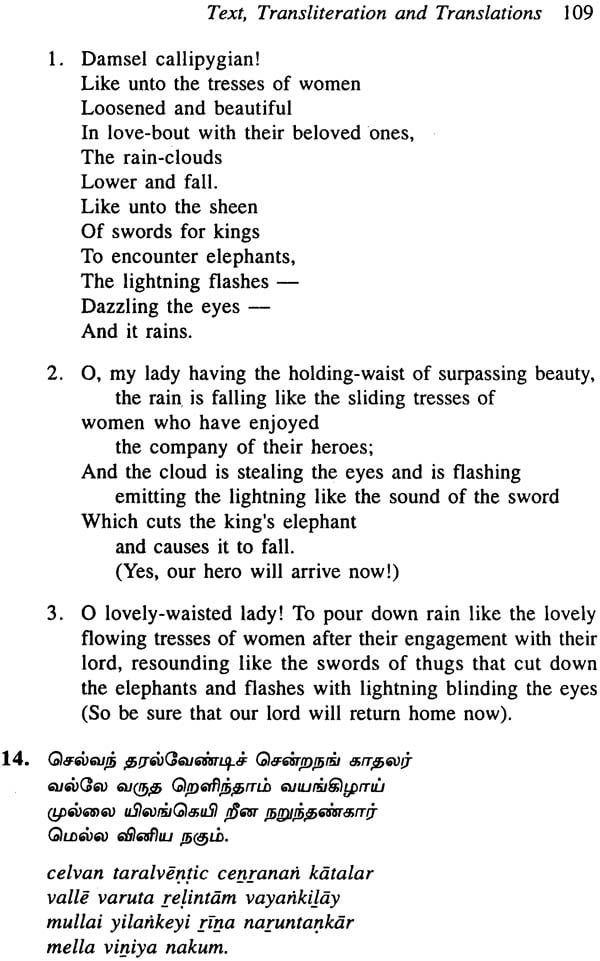 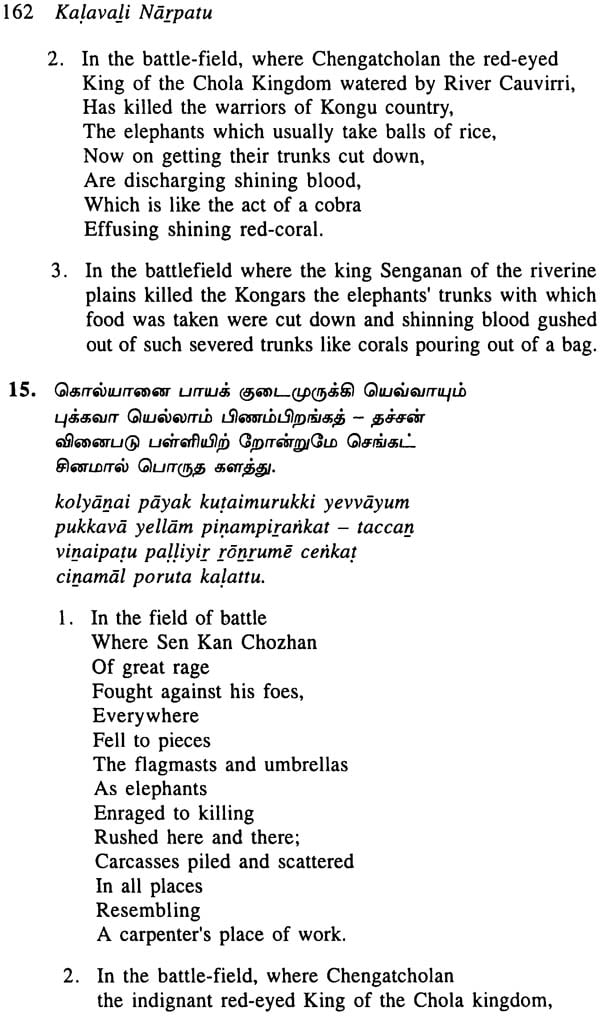 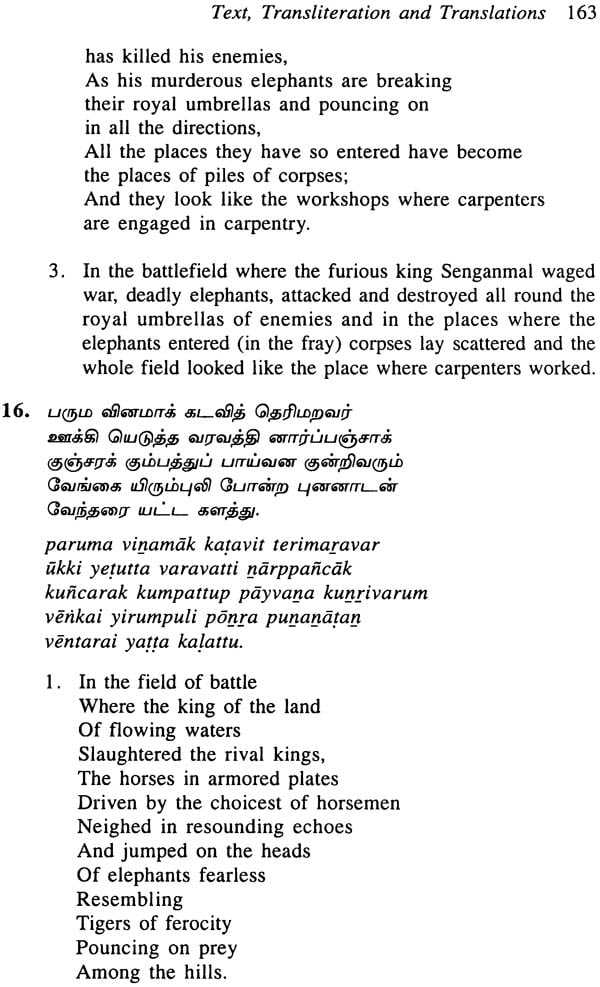 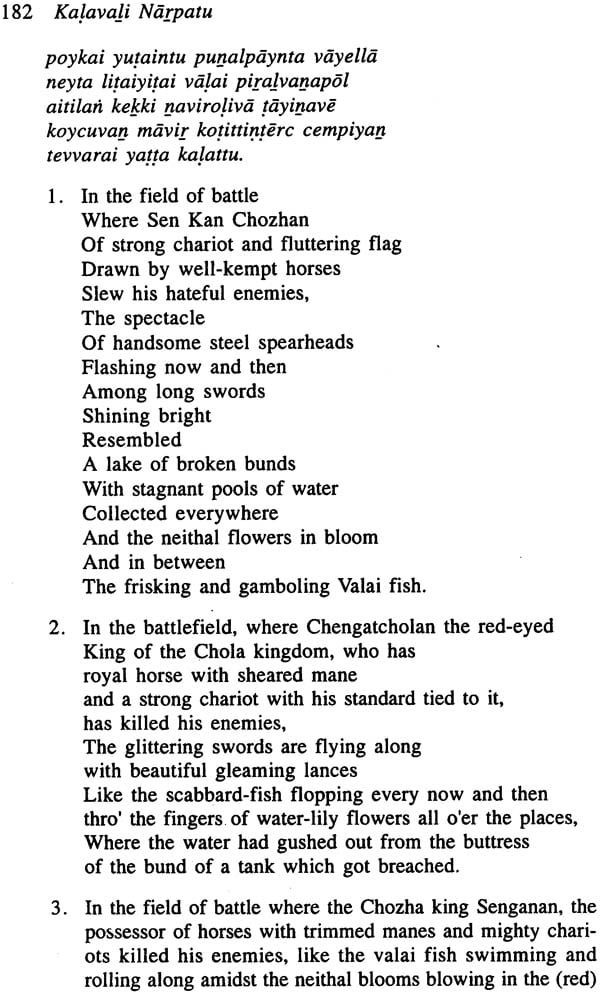 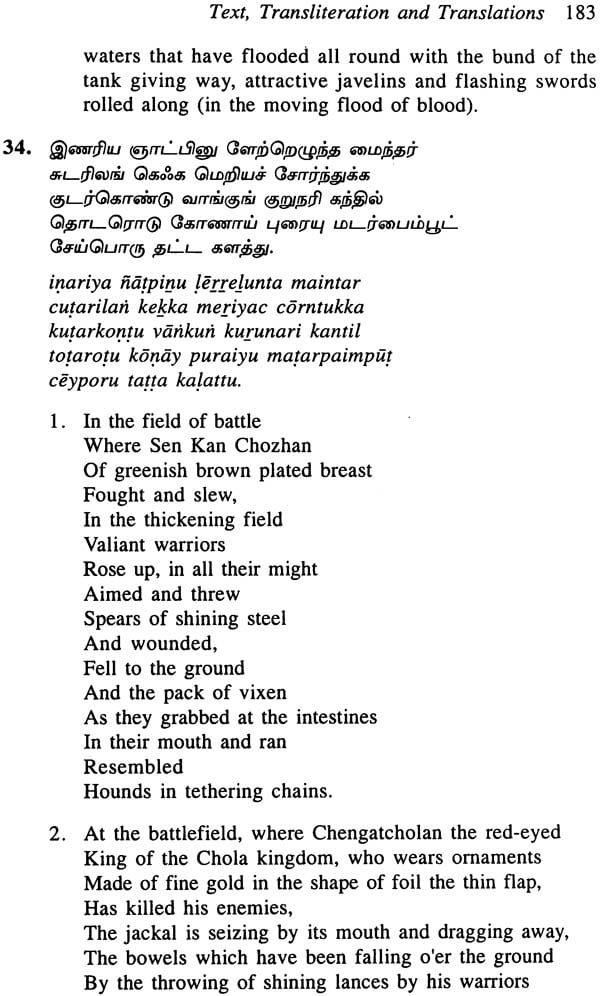 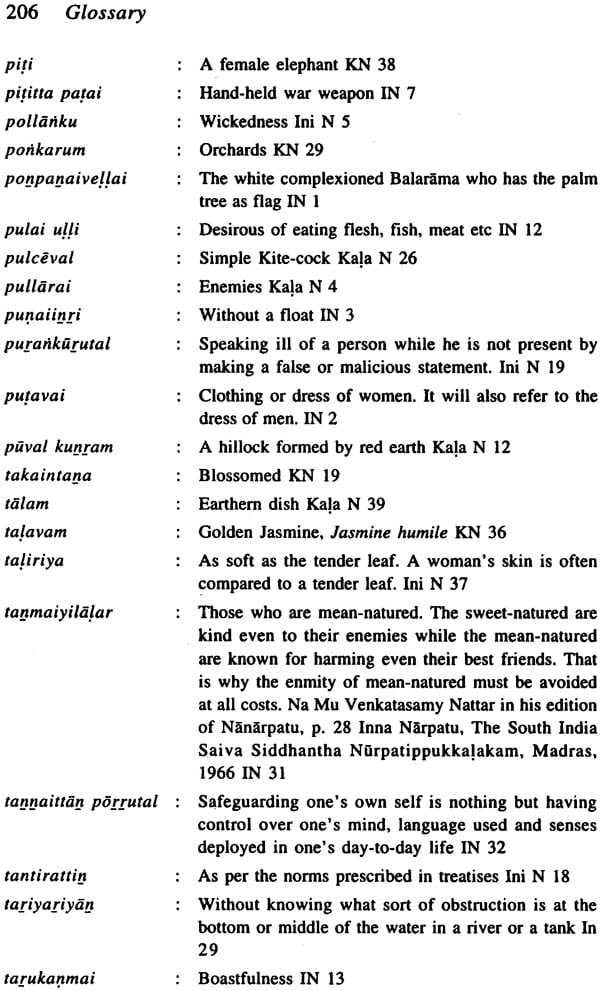 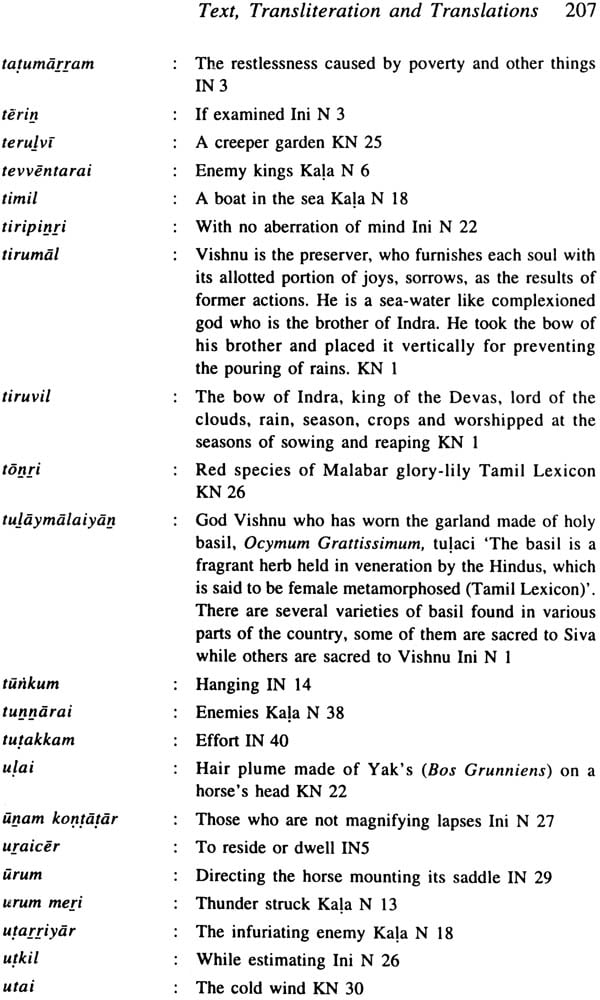 Tirikatukam: A Book of Tamil Quotations
By T.N. Ramchandran
$29.00

Tamil Dalit Literature (My Own Experience)
By David C. Buck and Kannan M.
$31.00

The Life World of the Tamils: Past and Present in Two Volumes (Set of 2 Volumes)
By D.P.Chattopadhyaya and R. Balasubramanian
$145.00

Narrinai (Text, Transliteration and Translations in English Verse and Prose)(Set of Two Volumes)
By V. Murugan
$95.00

A Supplement to Dravidian Etymological Dictionary
By P.S. Subrahmanyam
$31.00