ORIGINALLY this series of Upanisads appeared in the pages of the Vedanta Kesari, the organ of the Ramakrishna Math. Madras, and subsequently these Upanisads were reprinted in book form with some additions and alterations. It has been acknowledged by all scholars that the Upanisads constitute the supreme achievement of Hindu thought. The sublimity of their soaring meditation, the infinite range of their outlook on life, their fearless exposition of Soul-consciousness, their determined assertion of the verities of Existence and lastly their broad synthesis of knowledge and experience, have all joined to evoke towards them in the Hindu heart a feeling of profound awe and respect, and made it love them as Divine Revelations from the immemorial past. Moreover, to an aspirant of spiritual truth, the Upanisads shed a light unseen in any other scripture or literature of the world. It has, therefore, been felt as the supreme need of these times to popularise the Upanisadic lore. With this object in view, we have been publishing the original texts of the principal Upanisads with suitable annotations in the Vedanta Kesari. Some of these have been brought out in book form, and others also will follow.

The Upanisads, as the name implies, embody esoteric spiritual knowledge meant for reflection and contemplation, and hence the deeper a man dives into the significance of the passages of these scriptures in meditation, the greater the hidden meanings he finds in them. And so the sole object of the editor of this series in annotating the Upanisads is more to help such persons as are desirous of plunging into their spiritual contents than to satisfy the superficial reader or the mere scholar.

WHAT are the Vedas, of which the Upanisads constitute the end and aim, the very Crest-jewel? What is their source? What are their features? The great Sayanacarya, to whose elucidation the present understanding of their meaning is mainly due, defines the Veda as that literature which sheds light on the transcendental means of achieving what is wished for and avoiding what Is disliked The role of the Revealed Scripture lies beyond the spheres of perception and inference, for it illumines us about 'all the divinities, moral and spiritual duties of man, and Absolute Truth.'! Since man is imperfect, human deliverances, however exalted they may be, can hardly be accepted as final and infallible. Therefore on questions regarding transcendental facts a self-manifest, inherently valid, eternally existing, divinely inspired Veda alone can be considered infallible and conclusively authoritative.' The continuous unfoldment of the predominantly religious and spiritual culture of India for millenniums, governing the thought and conduct of the race, working through the moral and religious impulses of the entire people and drawing them ever to the realization of the highest values of life, attests to the greatness and penetrative influence of the Vedas.

The Vedas are transmitted from beginningless antiquity through a continuous chain of teachers and pupils, who, relying upon the statements in the Vedas themselves, considered them to be eternal and apauruseya, i.e., having no human source. Of those who hold fast to this theory of eternality, some substantiate their position by arguing that since the Vedas are the only source of our knowledge of Dharma and Brahman which are eternal, and since the relation between Word and its meaning is also eternal, the Vedas are eternal in language and content. There are others who view the unworldly and spiritual principles enunciated in them to be eternal and timeless, they do not subscribe to the other part of the argument, viz., the eternality of the language of the Veda, which, they would assert, is but the composition (vakya) of or aptapurusas-reliable and selfless personages who have realized those truths for themselves.

According to the famous Purusa-sukta, Rk, Yajus and Saman were generated at the beginning of creation from a mental sacrifice of adoration performed by the divine Prajapatis and sages with the Supreme Being as the material of the offering, The Svetasvataropanisad states that the Supreme Being creates Bahma and communicates to him the Vedas. The Brhadaranyaka IV. V. 11 has:

"As from a fire kindled smoke issues, even so, the Rgveda etc. are all the breath of this infinite Reality." The Brahma-sutra I. 1. 3 declares that Brahman is the source of the Vedas; and I. 3. 29 of the same book affirms them to be eternal. The Mimamsa-sutra I. 1. 18 establishes the eternality of the Word. The first stanza of Srimad- bhagavata, voicing the view of the Puranas in general, states that God, the Supreme Truth, caused the Vedas to appear in the mind of Brahma, the first 'poet.' Smrtis generally state that the eternally existing Vedas were remembered by the Creator at the beginning of the cycle of creation and were transmitted to the world through a chain of successors of teachers and learners. Sri Sankara in his introduction to the Glta-bhasya, speaks of the imparting of the Religion of Works and the Religion of Renunciation, constituting the contents of the Vedas, to Prajapatis like Marici and to sages like Sanaka, by the Lord Narayana, immediately after the creation of the universe, and also of the subsequent dissemination of the Vedic lore through that channel. These various accounts given in the authoritative books of the past speak for the inspirational quality of the Vedas and the great veneration with which they were looked upon from the dawn of the Hindu civilization.

Even though the orthodox teachers of India do not assent to (he dialectic differences and chronological strata recognised by Western scholars in the body of the Vedas they have their own logical appellations, divisions and classifications of the various parts of the Vedic literature. The Veda is generally spoken of as vidya (from the root 'vid' meaning to know, reflect, possess, be) denoting wisdom that is gained by intuition or instruction. When taken as a vidya, the Veda has two phases, a higher one and a lower one, para-and apara, the one connoting divine wisdom and the other knowledge of everything else that tends to it. Sastra is from the root 'sas’, meaning to wish, command or teach; and hence the Veda as a Sastra is either ajnata-jnapaka or apravrtta-pravarraka, that is revelational or mandatory. The Vedas are also known commonly as Nigama, Sruti and Amnaya. Nigama implies a settled text handed down from beginningless antiquity. Sruti denotes a revealed text heard by the pupil from the teacher. Amnaya is what is learned by repetition and reflection. Almost synonymous with apara- and para Vidya is the division into karma-kanda and jnana-kanda, work-section and knowledge-section, the former dealing with religious rites and duties and the latter with God, Soul and Nature. It is generally held that this twofold division coincides with the external division into non- Upanisadic and Upanisadic Vedic literature. Such a view cannot be taken as well-marked and precise, since there is ritualistic material interspersed in certain portions of some of the Upanisads and esoteric and philosophic ideals in the Samithitas. So Muktikopanisad 'recognizes that "like oil in the sesamum seed Vedanta is established essentially in every part of the Veda"". We are therefore to take these names and divisions more as dominated by the spirit and purposes that govern them rather than as mere formal or structural matter.

This leads us to the customary classification based upon the form, purport and style of the Vedic literature. These are the four well-known divisions of the Veda into J3.k, Yajus, Saman and Atharva: Mantra or Samhita, Brahmana, Aranyaka and Upanisad; and carana' sakha or bheda. Of the first division, the words ‘Rk' means a laudatory verse, Yajus, a liturgical passage or formula (mostly prose and sometimes metrical) and Sam an, a melody. These three species of compositions in their collective form were also called in a secondary sense R.k- Yajus- and-Sama-Samhitas. Finally by extension the Brahmanas annexed to these Rk-Yajus-Sama and Atharva-samhitas, the Aranyakas supplementary to them, and the Upanisads, either embedded in, terminated by, or affiliated to each of them, were also included by the name of the respective Veda to which they belonged. 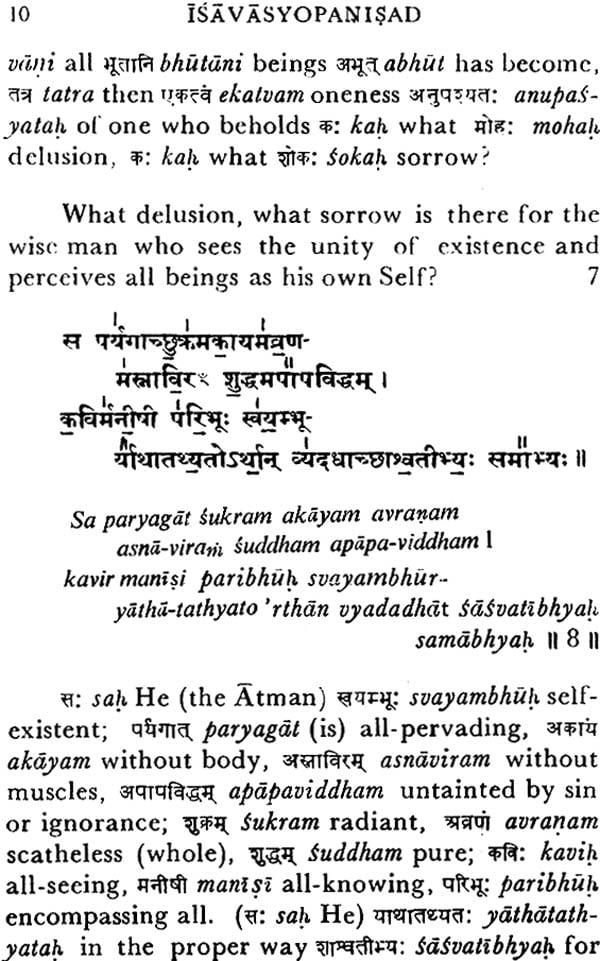 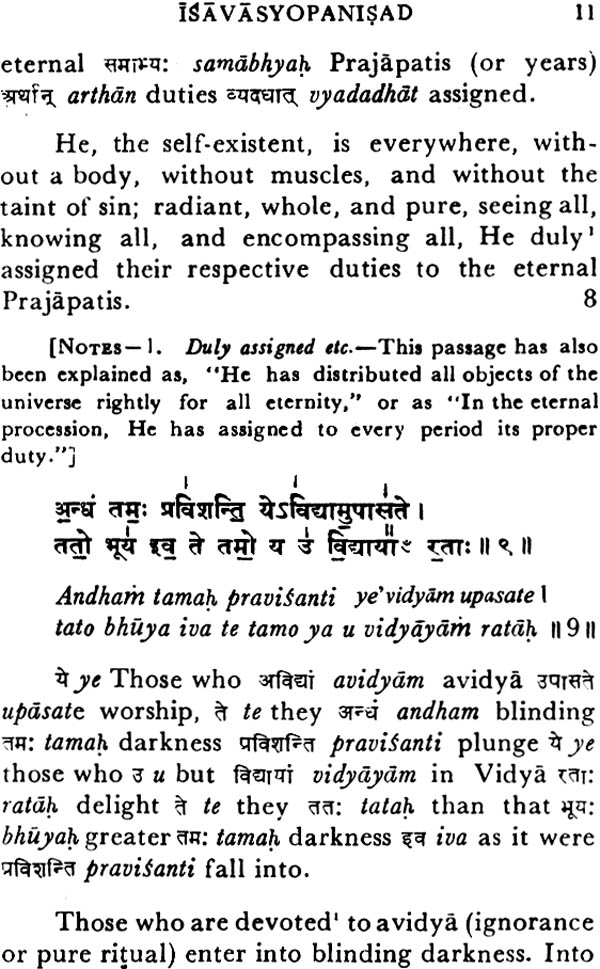