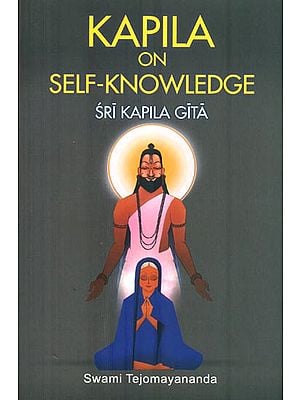 £12.00
Ships in 1-3 days
Notify me when this item is available
Save to Wishlist Send as E-card Share by Email
About the Book

The son fulfils his name 'putra' when he gives joy and saves his parents from hell. In Kapila Gita, the Lord as Kapila Muni, through Self-knowledge, transports His mother turned disciple, Devahuti, beyond joy and sorrow and heaven and hell, into a state of pure Bliss. Swami Tejomayananda further clarifies and beautifies this subtle teaching with his lucid commentary.

This wonderful teaching can become our passport to Bliss.

Pujya Guruji Swami Tejomayananda is an outstanding teacher of Vedanta, with a profound depth beneath his simplicity and humility. He has a simple conviction - to fortify, strengthen and actualise the vision of his Guru, Pujya Swami Chinmayananda.

Swamiji has written commentaries on many texts of Vedanta and authored many original compositions on Vedanta and Bhakti (Devotion).

He is the current head of the Chinmaya Mission -a global spiritual organisation with more than 300 centres worldwide.

Spirituality admits no barriers, or bias whatsoever. The untouchable can touch God, the young can be a Guru of the old, the enlightened embrace the fallen and so on. Daksnamurthy was a youth, his disciples were all elderly people. Prahlada was a lad of tender age, when he brought God into the life of his tyrant father. Same was the case with Kapila Muni. Kapila-gita is a touching story of how a young, mature son offers solace to his old, and dithering mother, Devahuti, whose soul hungered for spiritual succour.

CCMT is happy to publish this lucid commentary by Swami Tejomayananda about a divine son's loving and compassionate guidance to his mother.

Gita means that which is sung. It is a divine song which teaches us about the truth of life. It does not create a thrill or excitement in our mind like a movie song but stills the mind and delights the heart as it speaks about the blissful Self. It is a dialogue between a disciple and a Master. There are many such Gitas in our scriptures. Kapila-gita is one of them.

The eighteenth and last Purana composed by Bhagavan Veda Vyasa is the Bhagavata Mahapurana. It has 12 cantos (skandhas), each with many chapters (adhyayas) and contains a total of 18,000 verses (slokas). Kapila-gita is found in the third canto.

In the Bhagavata, as in all other Puranas, one story springs from another and the teaching is narrated as taught by many Masters. As the story goes, Sutaji (the son of Romaharsana who was a disciple of Veda-vyasa) was relating to Sage Saunaka and other sages what the great Sukadeva (the son of Veda-vyasa) had taught to King Pariksit (the grandson of Arjuna). Sukadeva, in his turn, was narrating what Sage Maitreya had spoken to Vidura about the incarnation of the Lord as Kapila Muni. The Lord, as Kapila Muni, had imparted the knowledge of the Self to His mother Devahuti, which is known as Kapila-gita.

Svayambhuva Manu and Satarupa had two sons (Uttanapada and Priyavrata) and three daughters (Akuti, Devahuti and Prasuti). Devahuti was a pure and chaste girl (Deva + ahuti = one who can invoke the Lord). When she grew up, she heard of the glory of Sage Kardama and fell in love with him without even seeing him. Her parents took her to him and requested him to marry her.

Sage Kardama was the mind born son of Brahma, the Creator. Brahma wished him to produce worthy children and so Sage Kardama took to severe penance. The Lord, pleased by his penance, appeared before him and advised him to accept the marriage proposal brought by King Manu for his daughter Devahuti.

Devahuti and Sage Kardama were married and the young, beautiful princess lived under a tree serving her husband day and night. The Sage remained absorbed in meditation for years. When he saw her serving him uncomplainingly, he asked her what she desired. She expressed her wish to live a household life with children and worldly pleasures. He produced, with his power, a wish-fulfilling plane which had all imaginable comforts. They travelled around the world and spent years of blissful married life. They had nine daughters. Then Sage Kardama decided to become a renunciate. Devahuti requested him to get the daughters married, give her a son and then take sannyasa. She was asked to undertake penance, as the Lord Himself was to appear as her son. In due course of time, a son, Kapila Muni, was born. The Lord Himself incarnated as Kapila Muni with the purpose of imparting the Sankhya sastra (the knowledge of the Self).

Sage Kardama left for the forest thereafter and absorbed himself in the Lord. After a few years, one day, Devahuti approached Kapila Muni with a desire for Knowledge. The dialogue that ensued is called the Kapila-gita or Kapila-upadesa.

The original Kapila-gita as found in the Bhagavata has many chapters and verses. The same has been abridged here, giving the essence of the teaching. 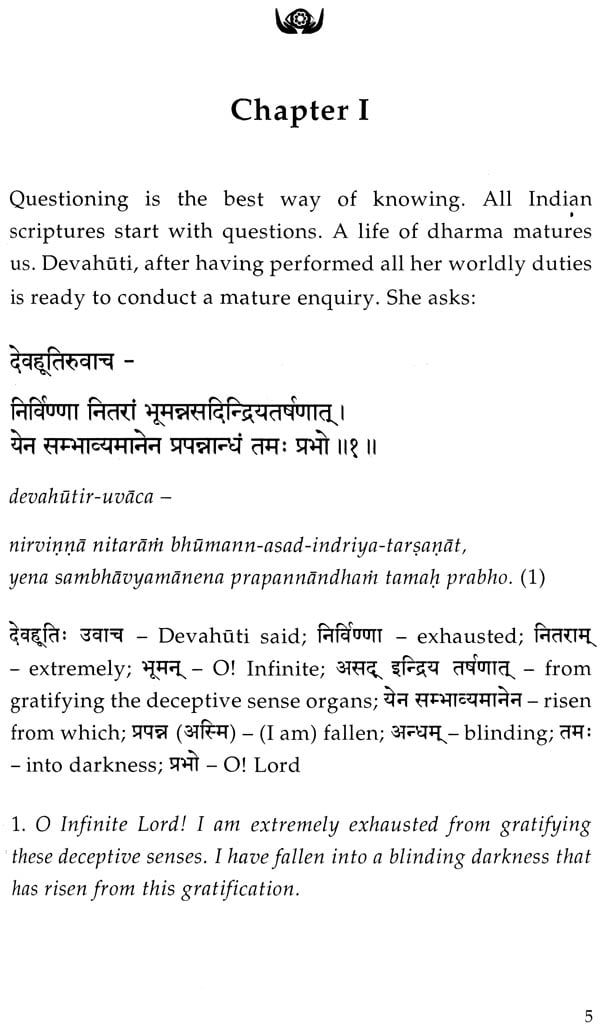 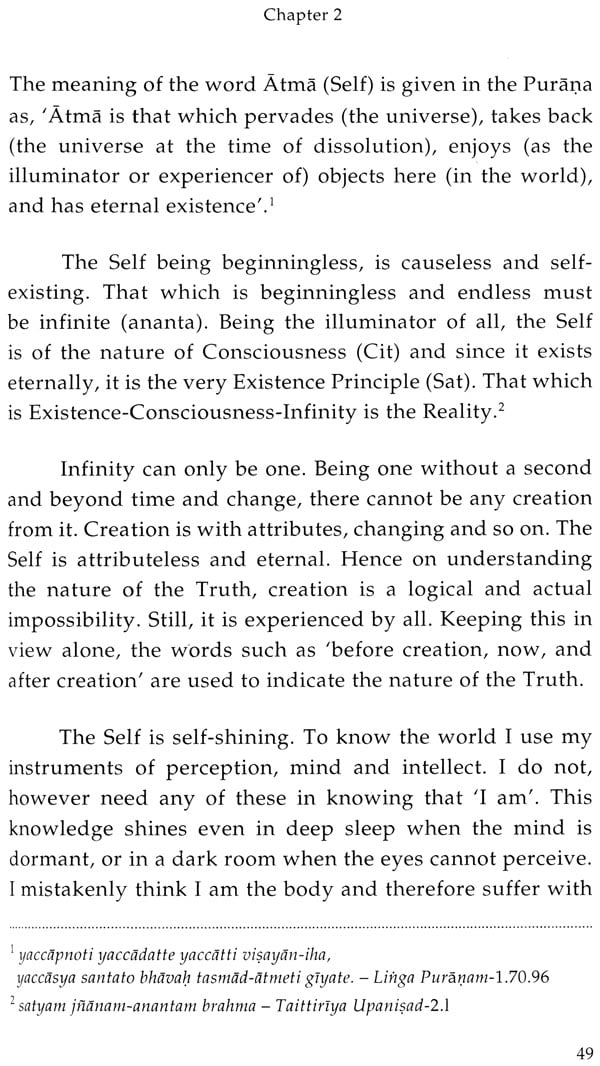 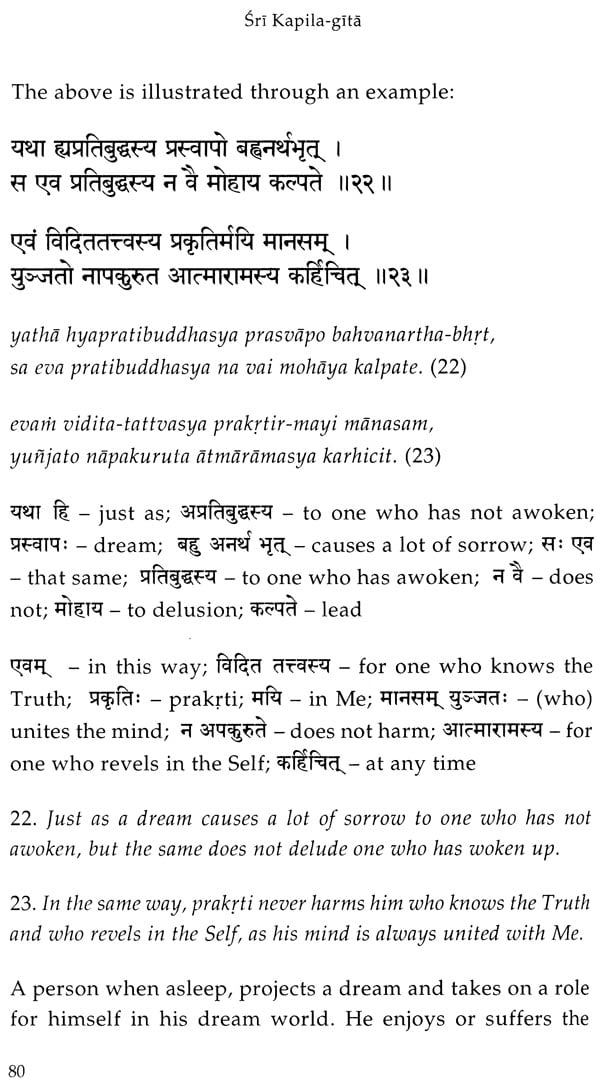 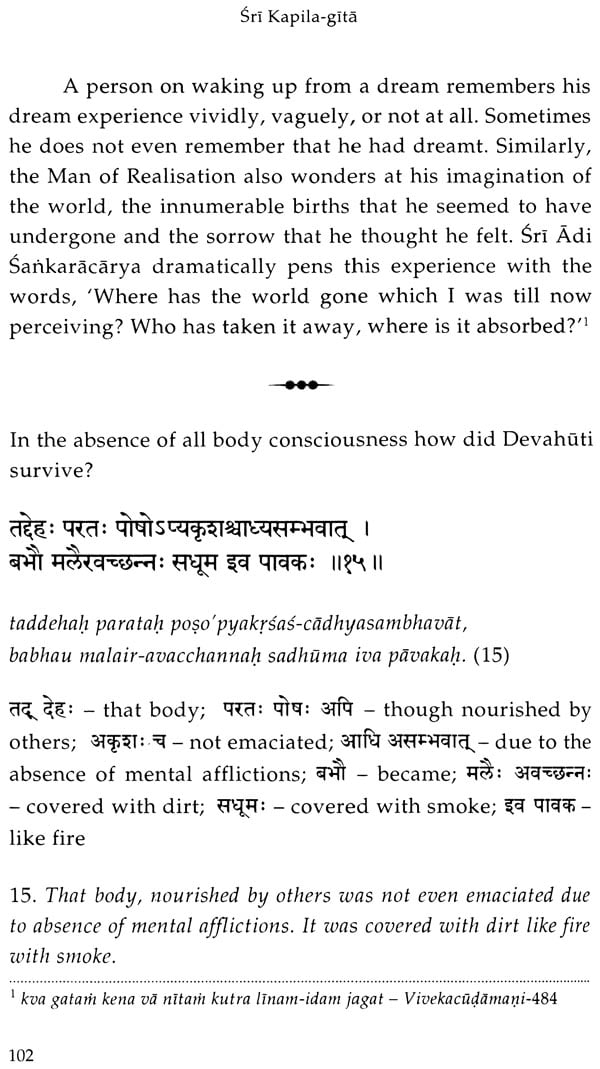 An Insight into Bhagavata Purana
By N. Krishnaswamy
£12.00