Kalidasa is the great, the supreme poet of the senses, of aesthetic beauty, of sensuous emotion. .. .In continuous gift of seizing an object and creating to eye he has no rival in literature." His appreciation by the connoisseurs of literature extended beyond the boundaries of time and space.

What strikes one about Kalidasa is his keen sense of observation, recognition of the essence of the object and suggesting it in themes succinct manner possible as well as his familiarity with nature and behaviour of people. Kalidasa had the style, the craft of the arts, intelligence and vocabulary, all of which contributed to his greatness. He was given the title of Kavikulaguru by the great poet Jayadeva. Baria also applauded his aptness.

Kalidasa has committed himself to the traditional modus operandi whether in describing emotions, in suggesting thoughts or in depicting the beauty of women. In some places, he has projected his rebellious ideas too but in a very moderate manner. It was the specialty of Kalidasa that instead of a blatant use of words he used them in such a way that they conveyed much more than what they meant.

This book provides inspiration and motivation to go deep into the works of Kalidasa. The objective of the book is to glean and examine minutely the rare qualities which made Kalidasa, a poet par excellence.

ADYA RANGACHARYA [SR1RANGA] 1904-1984: Born in a small town of Agarkhed in the erstwhile State of Bombay, he had his education at Bombay and London Universities. From an early age he was fascinated by the stage, by the rural stage in Kannada, the professional theatre in Marathi and by Shaw and Shakespear in London. Though he took to teaching at Dharwad and Bombay, where he was a professor of Sanskrit for a number of years, his interest always remained the theatre.

His writings were original and prolific, which made him a trend-setter-among kannada and other Indian writers. His works include twelve novels and a number of scholarly books on the Indian Theatre, onSanskrit drama, on The Bhagvadgita and atranslation of Bharata's Natyasasta; but it wasas a dramatist that he made his mark. He has to his credit 47 full-length and 68 one-act plays. Many of his plays have been translated into other Indian languages and have been performed on the stage at major centres in India. His play "Kelu Janmejaya", translated into Hindi as "Suno Janmejaya" and in many other languages has been performed all over the country. With this play, he set the trend for new techniques and was often called an avant-garde writer. He also acted in many of his productions.

He was one of the first to start theatre especially for teachers. This was to generate an early interest in students. Actively associated with the National School of Drama, he was instrumental in deputing many deserving students for training. Many of his plays have been trendsetters.

FOR ME, THE FEELING I have always had for Kalidasa has been r a "natural feeling", one has for a person close to you. Even before I could appreciate and savor the essence of his poetic works, I admired him. These feelings for Kalidasa are not any different from the way Kanva explains the feel-ings Sakuntala had for Dusyanta, as a case of an unfulfilled sibling love "abdndhavakrta snehapravrtti".

From the time I started reading books as a student, to the time I taught as a teacher for over 50 years, I have been time and again perennially influenced by the works of Kalidasa. In my book "Drama in Sanskrit Literature" written in English, I have written a long chapter on Kalidasa. That was about three of his plays. Later in 1960, I published a small manual on the works of Kalidasa. That was about his plays and about Raghuvamsam. I was still not satisfied.

It was when my friend Shri R.N. Habbu assured me about publishing that I was encouraged to write. I am still not satisfied that I have said all that I wanted to say. That satisfaction perhaps is never possible. That is because for me, the influence of Kalidasa only increases with each passing moment. His last play, Abhijnanagakuntalam, has this verse in praise of Lord Siva,

May the self existent Siva whose energy is immanent in everything put an end to my rebirths" What was it that made him express such detachment? As for me, for reading Kalidasa again and again to satisfy my thirst, let the Lord grant me unlimited rebirths!"

In this book, you will notice there are no references as would be expected. There is a reason for that. I have long lost the means to buy books and at my age I have lost the zest and ability to walk upto libraries to collect information. As writing has been my only means of subsistence, there was hardly any time to indulge in such luxuries. For this book I have referred to six books on Kalidasa. (There being a dispute about the authorship of Rtusamhara and about its poetic format, I have not included it).

The selected works are:

My notes and comments as a teacher in a college and my book "Drama in Sanskrit Literature" have helped me. If this book provides an inspiration in generating an interest in Kalidasa and in developing a taste for his works, I will be ever grateful.

ONCE UPON A TIME, long ago, a story goes that a few people got together and tried to enumerate the poets in our country. And much to their surprise they could count them on their fingers. A Sanskrit Sloka describes such a situation with great enthusiasm and in an entertaining manner.

It is believed that the count started with the little finger. Somebody said "first Kalidasa" and bent the little finger. Then saying there could be no poet equal to him, he bent the next finger, that is the ring finger and since in Sanskrit it is known as "Anamika"-(nameless) he knew he had used the word in a meaningful manner! There is no dearth of legends regarding Kalidasa. If students of Sanskrit speak about it as in the gloka above, those who are not students of Sanskrit have their own tale to tell. They say that Kalidasa was a shepherd. He had no education of any sort. When a princess of the kingdom did not approve of any prince for her marriage, in order to punish her the scheming minister arranged her marriage with this shepherd. After marriage, the princess having grasped the whole situation, and in order to teach the minister a lesson prayed to the goddess Kali. As a boon from Kali, goddess Saraswati in person came down and danced on the tongue of Kalidasa. From that day onwards as the legend goes, he was called as Kalidasa. The impression one gets is that if on one hand such an idea can make a common person have a sense of pride about the poet, on the other hand the feeling remains that without the blessing of the gods no poet can attain such greatness.

Finally, there is another legend on how Kalidasa became a favorite poet of the learned Pandits. In Sanskrit literature there was another great dramatist and that was Bhavabhuti. One of his plays Uttararamacharitam is considered to be a great play in Sanskrit literature. In the first act of the play after the coronation of Rama, when all the elders had left Ayodhya for various reasons, Ramachandra not knowing how to pass his time is talking with Lakshmana. During this period, in order to help him pass time, Laksmana shows his brother and his sister-in-law pictures of some of the events during their exile in the forest. Watching this Rama is reminded of many occurrences that took place then. Looking at the picture of the area around the river Godavari, he asks Sita, "Do you remember how Lakshmana served us in that hilly area? And do you remember the way in which we lived there?" In this context he tells her:

As we came near, we embraced each other and cheek to cheek we slept muttering sweet nothings. We did not know how time passed and the night was soon over".

It is believed that Bhavabhati showed this Sloka to Kalidasa. Kalidasa saw that and remarked," It seems to be alright except that there is one extra punctuation mark." "Which one?" asked Bhavabhati in all humility, with fear and with a sense of awe. Kalidasa showed him the "revam" in the last line. With that the meaning of the last line changed. It was not that the night passed off but that the night came to an end meaning that love making did not end. 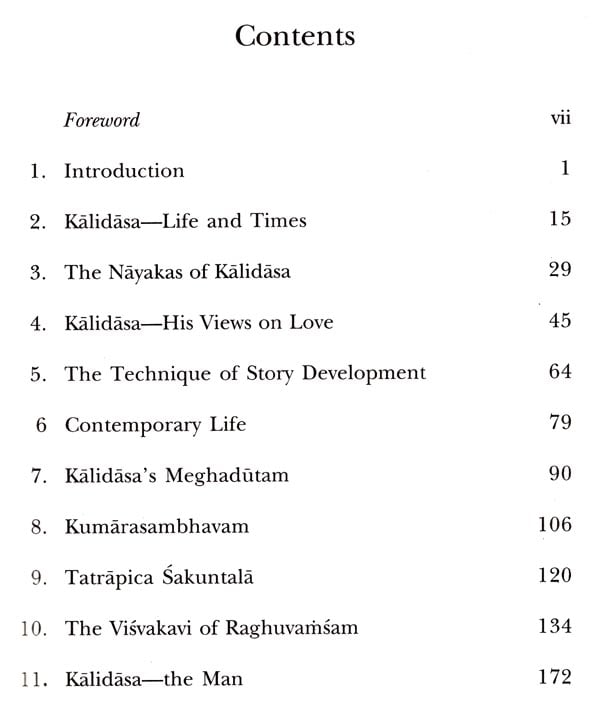 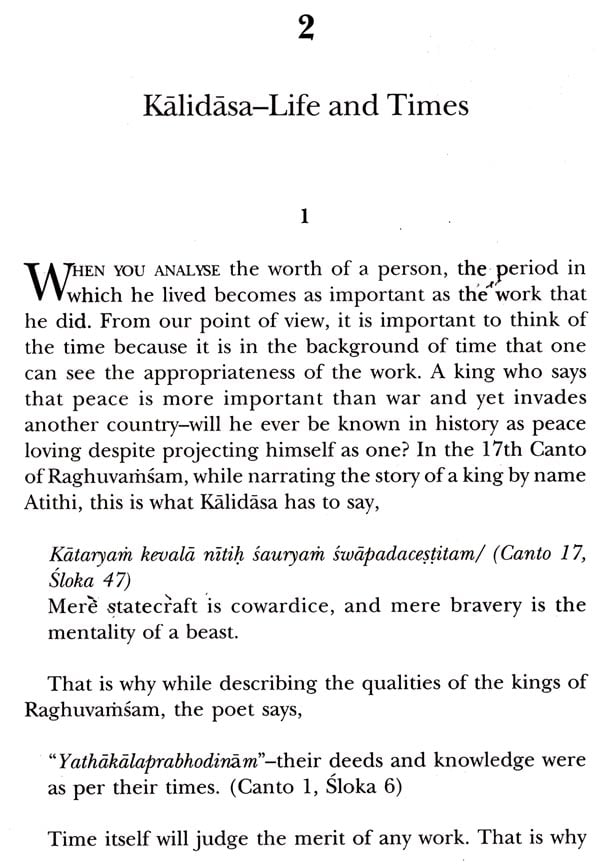 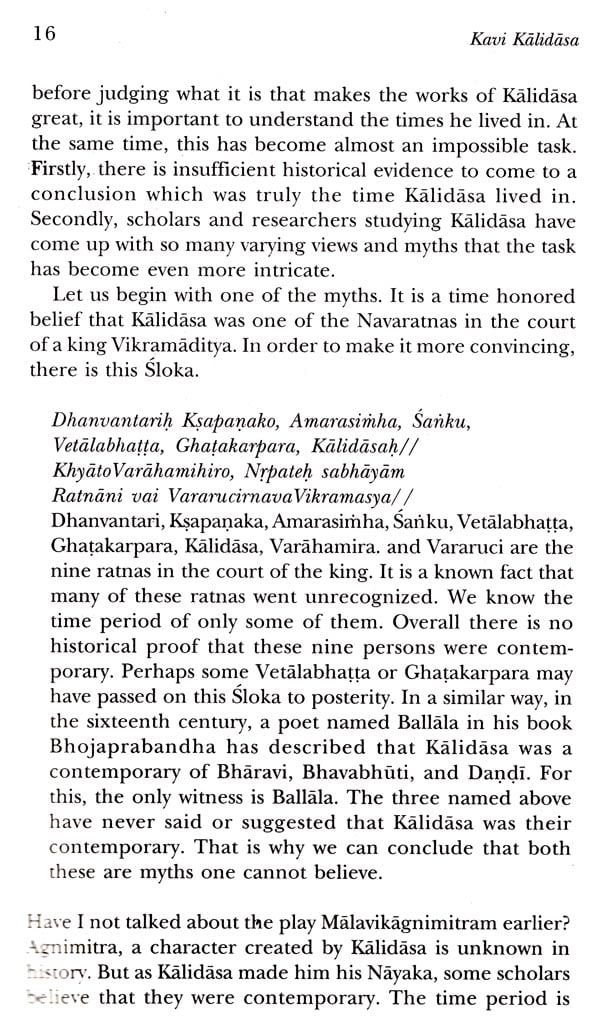 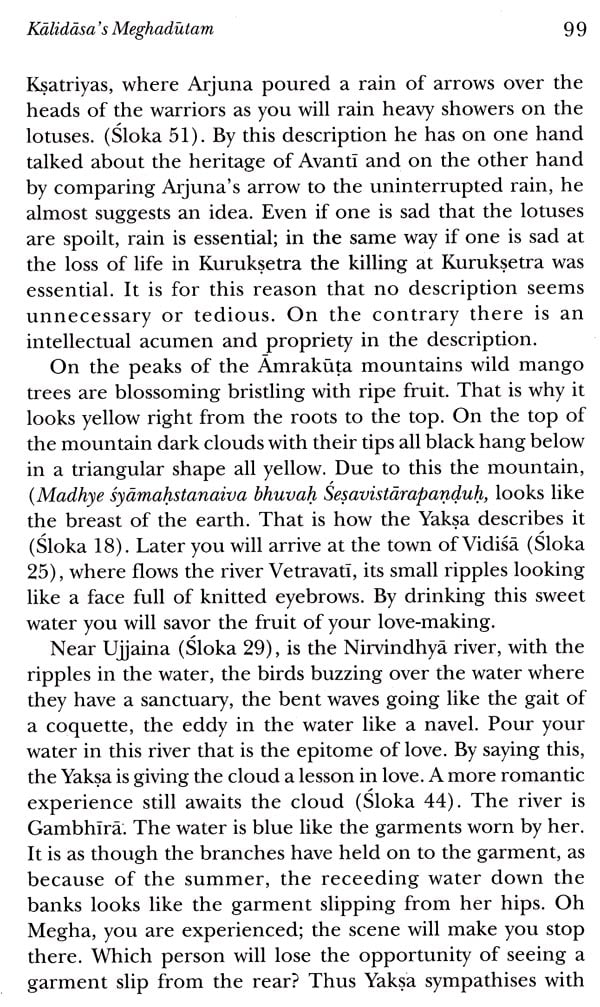 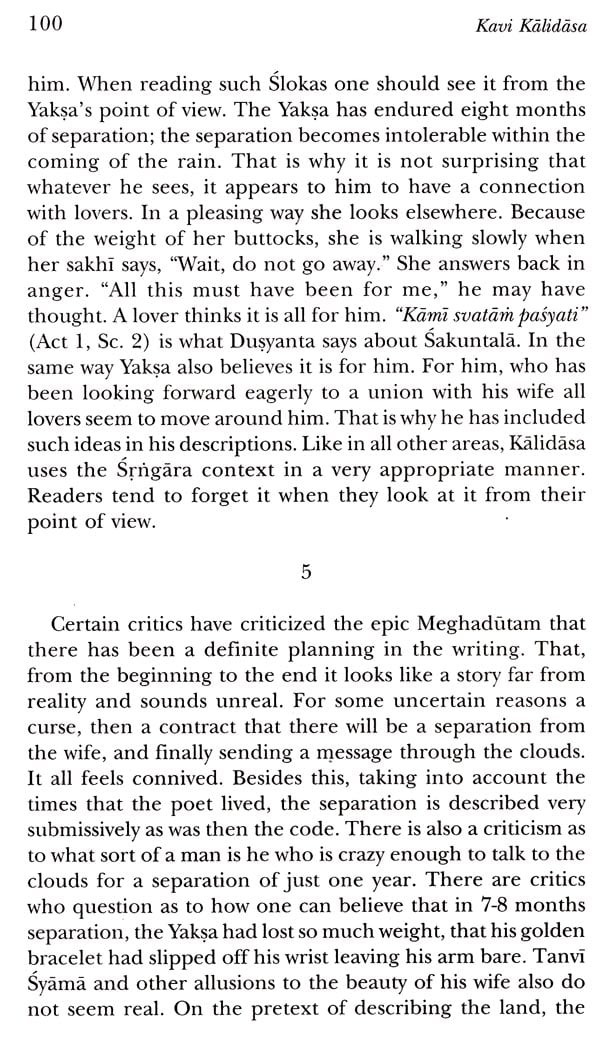 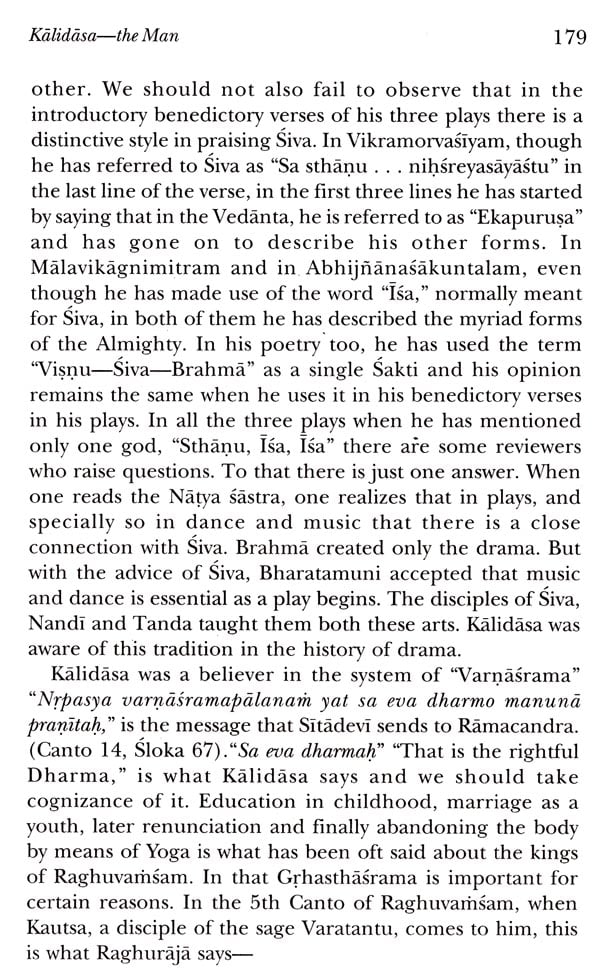 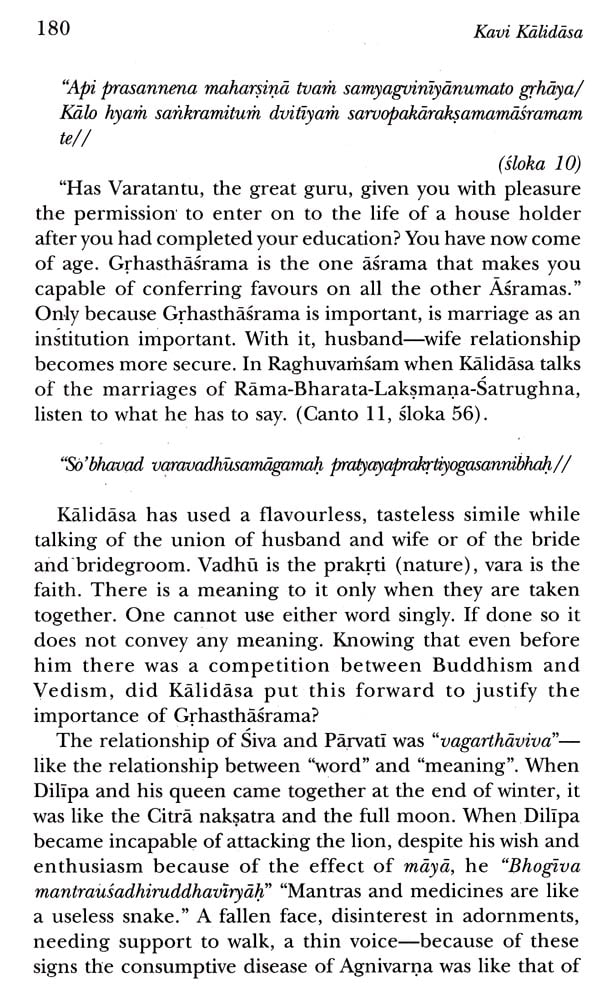 Malavikagnimitra of Kalidasa (An Old and Rare Book)
By Dr. A. Ramulu
$22
FREE Delivery The Tragicomedies of Shakespeare, Kalidasa and Bhavabhuti (An old and Rare Book)
By P.B Acharya
$39
FREE Delivery The Imagery of Kalidasa ((An Old and Rare Book)
By Dr. Vinod Aggarwal
$29
FREE Delivery