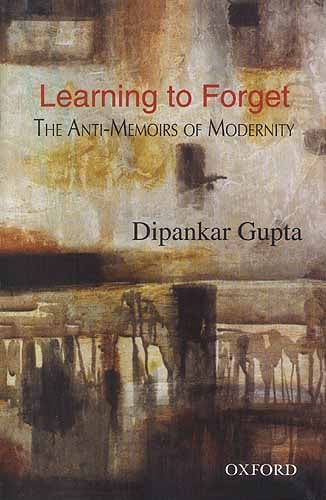 23 years in business
From the Jacket :

Dipankar Gupta argues that modernity should not be equated simply with such factors as industrialization and urbanization, nor with all that is contemporary. Instead, modernity should be seen primarily in terms of social relations, especially in the way it distances itself from the past by emphasizing intersubjectivity between individuals.

Intersubjectivity is not understood here as a self-conscious philosophical disposition but rather as an untheorized, taken for granted assumption that premises relationships between individuals in a modern society. For this to happen it is necessary that there be a sharedness of being which is captured in this volume by the term iso-ontology. It is iso-ontology that provides the sociological space necessary for intersubjectivity to be realizable.

As none of these can draw on tradition, modernity is best achieved if conditions propitious to forgetting the past are encouraged.

In line with this thesis on modernity, Gupta demonstrates how modernity finds expression in various fields such as fashion and sport, in the distinction between the private and the public, as well as in the new paradigms of development that privilege 'felt aspirations'.

However, the volume contends that ethnic movements which may use contemporary technologies of destruction are inherently traditional and anti-modern as they are burdened by memory and are incapable of generating intersubjectivitity. This is why every time we are forced to remember, the chances are that at precisely those moments, modernity is pushed back.

Abstract and sophisticated, yet illustrative, and accessible, this volume will interest social scientists and researchers and more specifically sociologists, social anthropologists, political scientists, and historians.

Dipankar Gupta is Professor, Centre for the Study of Social Systems, Jawaharlal Nehru University, New Delhi. The author of Rivalry and Brotherhood: Politics in the Life of Farmers in Northern India (OUP, 1997), The Context of Ethnicity: Sikh Identity in a Comparative Perspective (OUP, 1996), he has also edited Social Stratification (OUP, 1991) and more recently Anti-Utopia: Essential Writings of Andre Beteille (OUP, 2005). He is also co-editor of Contributions to Indian Sociology.

CONTENTS
Add a review
Have A Question