Renowned scholars such as Tucci, Wylie, Regmi and Bacot have long thought this Nepalese princess was a mythological figure only.

Now, exciting and compelling evidence reveals that Bhrikuti Devi was indeed a historical princess in the 7th Century, given in marriage to a Tibetan king and subsequently changed the course of Himalayan history by introducing Buddhism from Nepal.

Although her marriage was not recorded in texts outside Tibet, Bhrikuti Devi nevertheless became a great woman in her own right by propagating Buddha Dharma. This remarkable woman was also responsible for the construction of the first ancient temples in both Tibet and Bhutan, including the famous

Jokhang and Potala temples in Lhasa.

A fascinating biography for anyone interested in the history of Nepal and Tibetan Buddhism and a dynamic feminist personality of the Licchavi periond.

Legendary Nepalese Princess Bhrikuti Devi who lived around mid-seventh century A.D. is perhaps best known for having married Tibetan King Srong Chen Gampo and promulgating Buddhism through the construction of the world famous Potala Palace (which still bears her images) and Jokhang Temple which is credited to her.

Although some Tibetologists regard the existence of the controversial Bhrikuti Devi as Mythological, author Min Bahadur Shakya has thoroughly researched lost Tibetan text that shed light on this fascinating and mysterious woman who played as monumental role in Tibetan history as did Helen of Troy the Greeks.

After a mystical experience, the victorious Tibetan king requested the hand of Bhrikuti Devi from Nepal. Unlike his counterpart in Beijing, the Nepalese king wisely acquiesced, and agreed to send his daughter to distant Tibet on the condition that she spread the Dharma from the land of Buddha's birthplace.

A tender teenager at the time, Princess Bhrikuti Devi was escorted over the Himalayas by a band of soldiers and loads of priceless jewels and Buddhist images borne by a caravan elephants. The rest is history and the fabulous stuff of legend. In any case, Bhrikuti Devi no doubt earned herself the name of "White Tara" for which she is still venerated.

The Author, Min Bahadur Shakya is a scholar of Newari and Tibetan Buddhism. Among his major publications are A Short History of Buddhism in Nepal, Introduction to Buddhist Monasteries of Kathmandu Valley and Iconography of Nepalese Buddhism.

He was elected Vice President of the world Fellowship of Buddhist youth (WFBY) from 1984-1988 and was nominated as Research Associate of the Fokuang Shan Chinese Buddhist Research Academy (Taiwam), 1989-`1990.

In 1990 he was granted a SAARC fellowship in Buddhist Studies by the Ministry of Foreign Affairs of Bhutan where did extensive research of Tibetan texts on Princess Bhrikuti Devi for the present volume, his major work to date. Currently he is Editor-in-Chief of Buddhist Himalaya, a semiannual journal and also serves as Director of the Nagarjuna Institute of Exact Methods, Center for Buddhist Studies in Kathmandu. In addition to his renowned. Buddhist scholarship, Mr. Shakya also teaches at the Engineering Institute at the Pulchowk Campus in Lalitpur.

Tracing out of the early history of Nepal is very difficult. Due to the lack of authentic historical materials, many phases of early history are dark. There is no systematic presentation of historical facts and figures in any logical sequence. Besides, legends and stories are so mixed up with factual events that separation is almost impossible. To trace out the early history, we have to depend on diverse source materials. Our source materials are basically the inscriptions, royal chronicles, colophons and travel accounts of various persons.

Many early historic documents, inscriptions and monuments have disappeared due to historic denudation and natural disasters. Fortunately there are some inscriptions which give us some clues for formulating a plausible history of this ancient period. From Nepalese sources alone, it is very difficult to formulate and sketch the life of Princess Bhrikuti Devi. For this we have to depend entirely on Tibetan sources, which I have tried to present in this study.

As I have said, the disappearance of historical documents is due to Islamic invasions, natural disasters and vandalism. The Vamsavalis refer to the invasions of Sultan Samsuddin in the Kathmandu Valley. Major sites of importance were destroyed by him. The Swayambhunath Inscription of N. S. 492 [A.D. 1362] corroborates the fact that Sultan Samsuddin invaded the valley, broke down and burned the Swayambhu Stupa on November 23, 1346. The inscription of Pimbahal in Lalitpur also refers to destruction of Pimbahal caitya and its restoration by Mahapatra Sri Meghpala Varma. The Nepalese people experienced frequent disasters during the period 1255-1350. They lost possessions, monuments, manuscripts and historic regime, many Buddhist manuscripts were burned, thrown into rivers or perished. These are the main reasons for the lack of material, but even these events have not completely destroyed all of the manuscripts. The people of Nepal still possess, and have preserved, some documents in their private homes and monasteries.

Prior to the Islamic destruction of the world-famous Nalanda and Vikramashila monasteries, these monasteries were humming with academic life. Great Buddhist scholars such as Ratnakara Santi, Naropa, Advyavajra and Atisha were busy writing new sastras and lecturing to pupils and yogis from distant lands such as Nepal, Tibet, China and even Koreas.

Naropa (1016- 1100) had seven disciples who were like him in explaining Sutras and Tantras. They were Lord Maitripa, Sri Santibhadra of Nepal, sPhyi-ther-pa of Nepal, Dhombhipa, Santipa, Akarasiddhi from Kashmir and the novice Prajnasimha. He also had fifty -four yogis who observed certain vows such a Paindapa from Nepal, as well as a hundred yoginis who all had the signs of spiritual attainments. In this aspect, the Nepal valley was no less important than the Nalanda and Vikramshila monasteries. Buddhism at that time was in its height of glory. Speaking of Patan, Snellgrove has written, "Patan must have been a kind of vast University -city, differing little in its way of life from similar towns in medieval Europe. In fact its buildings, its traditions and its way of life must have been modeled on the great monastic universities of central India." Again, "This city was once a place of sanctity and learning, where monks and pandits were glad to come and visit. Some came from India to teach, others from Tibet to learn." This is corroborated by the inscription of NS 350 (A.D. 1230) found in Guita vihara (Skt. Prasannashila Vihara) of Patan inscribed on the statue of Dipamkara Buddha. It runs thus: Vikhyata lalitapuriti nagaridikshu sarvasvapy vidyabhyam.(Translation: "Lalitpur is famous in all directions for its practice of academic life.")

In the same inscription, the name Gautamasri and his disciples are mentioned. The fact that the city of Patan/Lalitpur had been the famous centre of learning in medieval ages is also corroborated by the visit of Marpa, the translator in Ratnakara Vihara of Patan. Marpa had stayed in Patan and Kathmandu for three years to study Anuttara Yoga Tantra under famous Gurus like Paindapa and sPhyi-ther-pa.

In the same inscription, the name Gautamasri and his disciples are mentioned. The fact that the city of Patan/Lalitpur had been the famous centre of learning in medieval ages is also corroborated by the visit of Marpa, the translator in Ratnakara Vihara of Patan. Marpa had stayed in Patan and Kathmandu for three years to study Anuttara Yoga Tantra under famous Gurus like Paindapa and sPhyi-ther-pa.

Nepalese Buddhist Acharyas were in constant touch with the Indian Buddhist masters. Guru Paindapa and sPhyi-ther-pa were famous and gifted disciples of Naropa. The famous translator Rwa Lo-tsa-va spent most of his time with Nepalese Guru Mahakaruna, an expert in the system of Naropa's doctrine. Rwa studied with him for many years and, out of gratitude, invited his Guru to Tibet. All these travel accounts of the Tibetan Buddhists visiting Nepal indicate that the routes from Tibet to the famous monasteries of India were heavily used by Buddhist monks and traders. One such Buddhist monks and traders. One such Buddhist monk of Tibet, Brog mi Lo-tsa va, had come to Nepal and spent a year under the famous Guru Santibhadra and received many teachings from him. Guru Santibhadra was the disciple of both Naropa and Santipa. Brog mi Lo-tsa-va became Mahapandita, possessing limitless knowledge of the five sciences. Gos and Marpa lo-tsa-va became his principal disciples. In the travel accounts of Dharmasvami, he mentioned his visit to Sthavira Ratnarakshita and his offering of Vajra and Ghanta as a token of respect to him. He saw three hundred such Vajra and Ghantas in his possession, indicating that he had initiated three hundred Tibetan disciples. He also mentioned an important Buddhist Ravindra living in the Swayambhu area.

The account of Dharmasvami has furnished much important information, which was hitherto unknown from Nepalese sources. Thus the use of foreign sources such as Tibetan and Chinese accounts is inevitable.

Although from the Nepalese side there is no evidence of Princess Bhrikuti Devi from contemporary sources (i.e., the inscriptions of Lichchavi period found in various places in the Kathmandu Valley), we cannot rule out the events concerning her marriage to the Tibetan king Srong btsan sgam po. Lack of contemporary document is not proof of her non-existence in history. She was definitely a historical figure who diffused Buddhism in Tibet with the help of the Tibetan king. She built many temples and palaces. The famous Jakhang Temple and the Potala Palace are living examples. The strong oral and scriptural traditions of the Tibetan people attest to this fact. Historically and politically, the marriage of Princess Bhrikuti Devi of Nepal to the Tibetan King is so likely that we cannot rule out his event as a fanciful insertion in the realm of history. Some scholars have held this view. Here in this present study I have tried to present some plausible arguments about her existence and the possibility of her marriage to the Tibetan king. 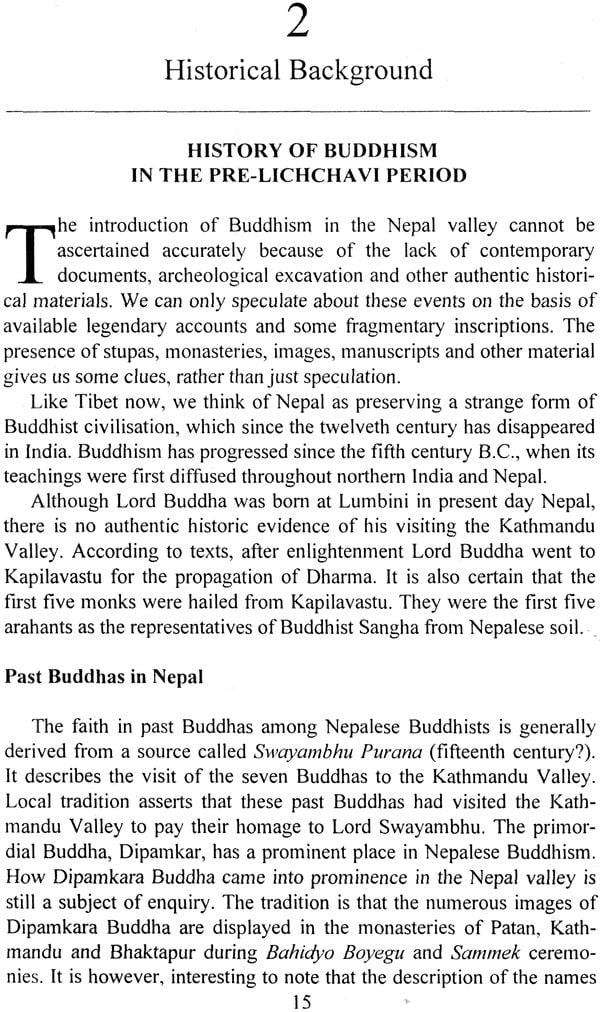 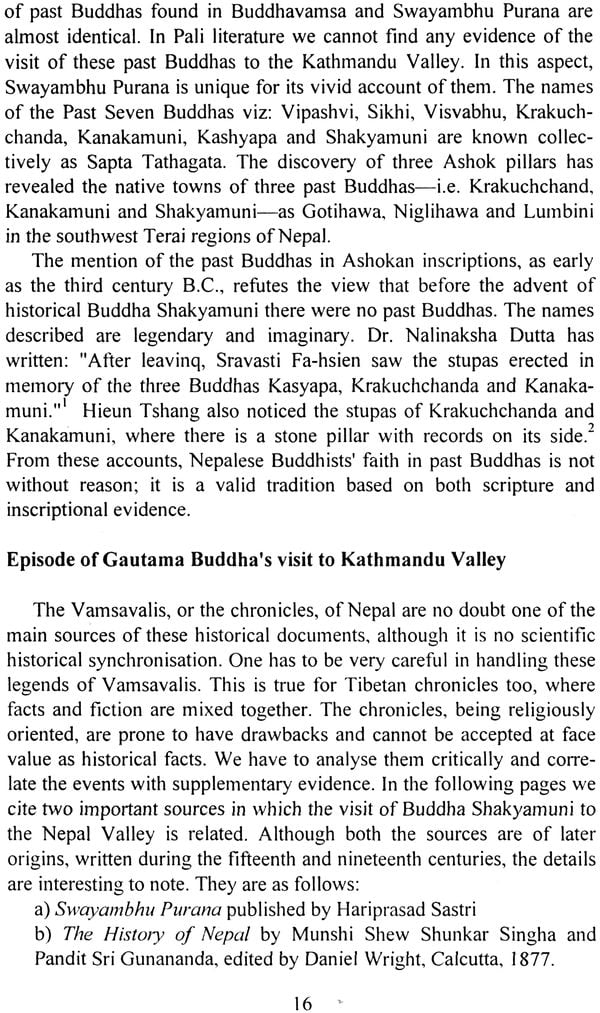 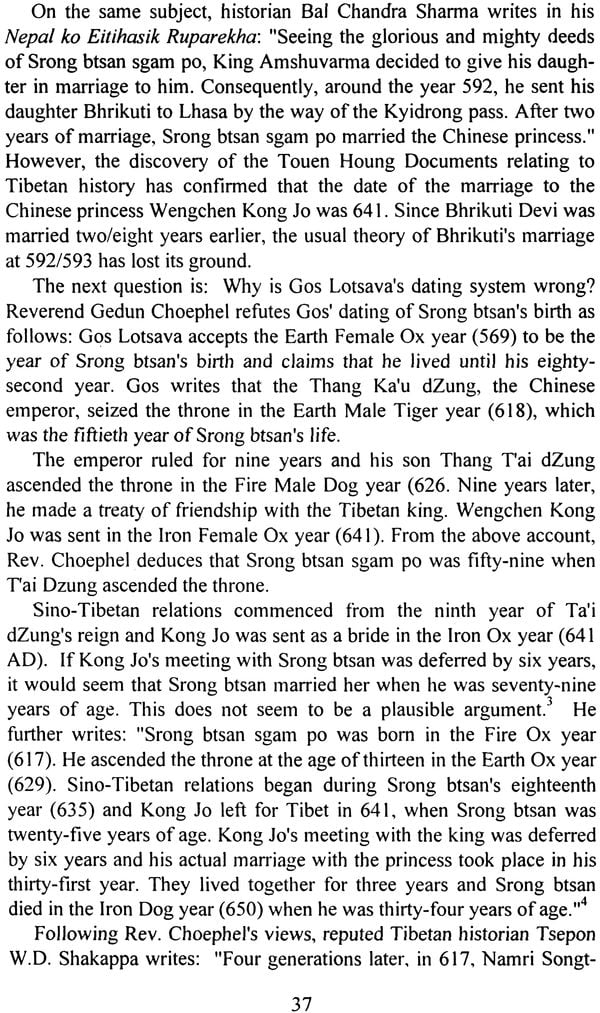 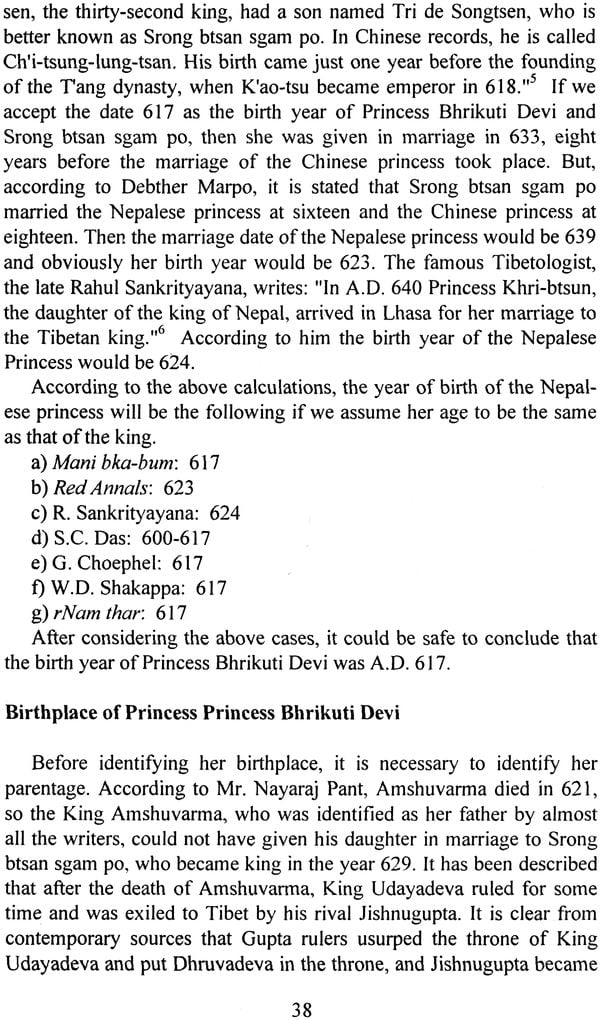 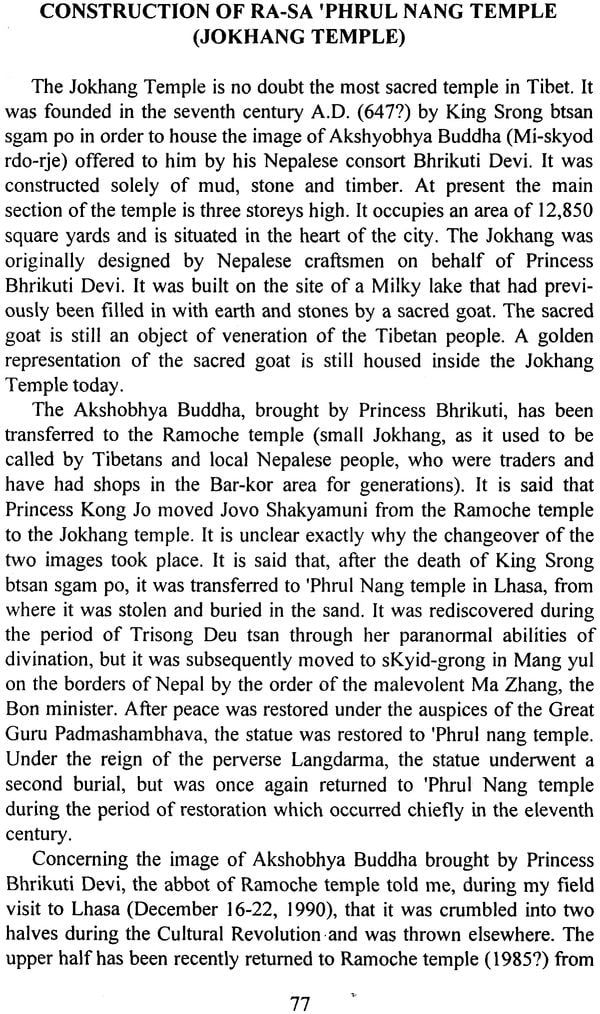 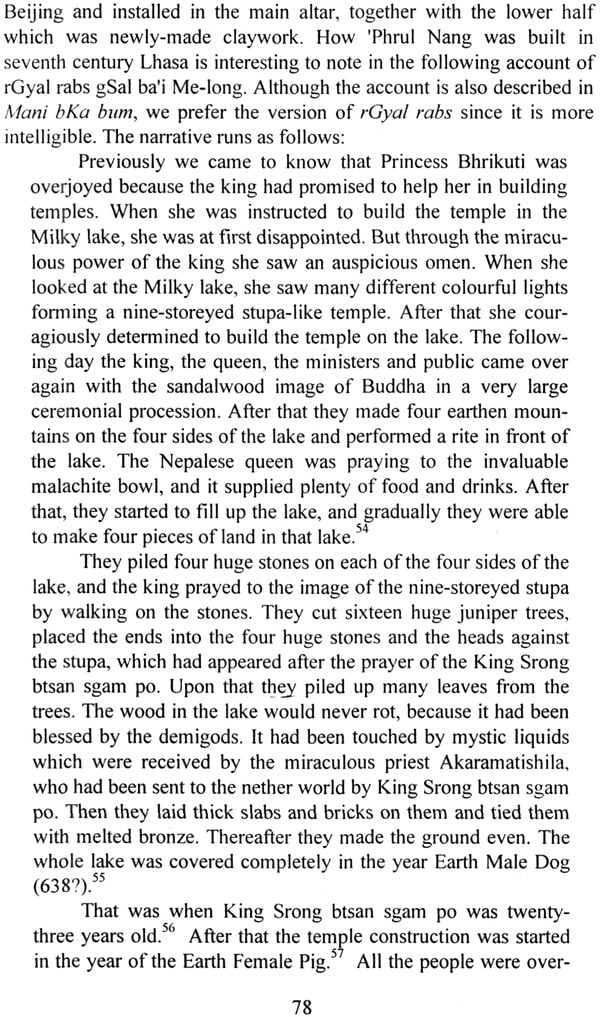 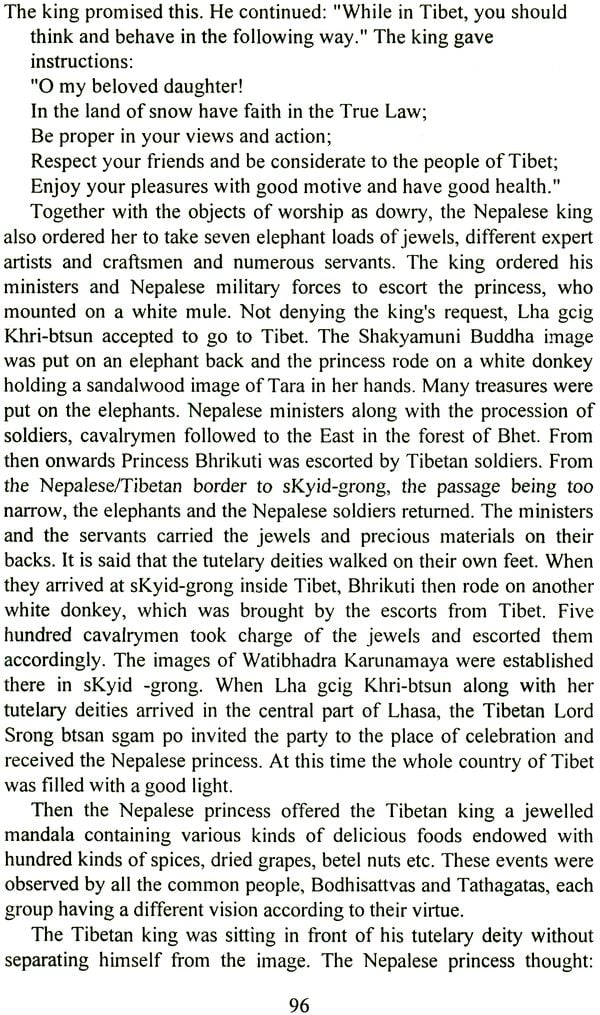 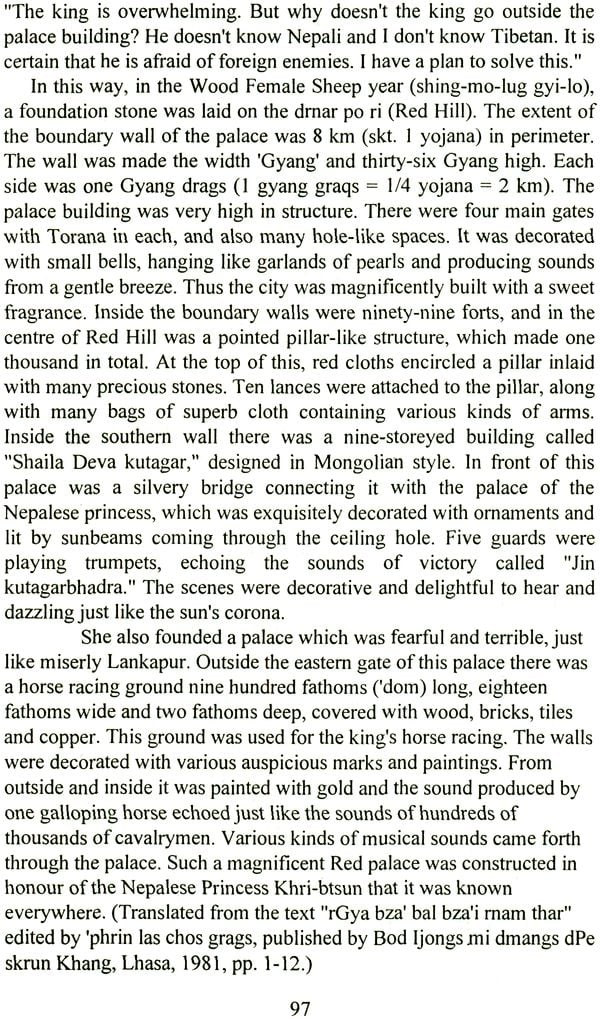 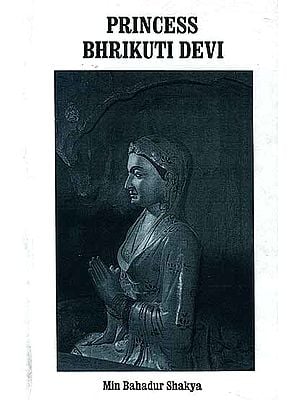 Development of Buddhist Iconography in Eastern India : A study of Tara, Prajnas of Five Tathagatas and Bhrikuti
By Mallar Ghosh
$40.00

Development of Buddhist Iconography in Eastern India : A study of Tara, Prajnas of Five Tathagatas and Bhrikuti
By Mallar Ghosh
$40.00