Nepali Transformational Structure: A Sketch (An Old and Rare Book)

On the 15th of October 1964 the Deccan College celebrates the centenary of its main Building, and curiously enough this period coincides with the Silver Jubilee of the Postgraduate and Research Institute which, as successor to the Deccan College started functioning from 17th August 1939 when members of the teaching faculty reported on duty. When I suggested to members of our faculty the novel idea that the centenary should be celebrated by the publication of a hundred monographs representing the research carried on under the auspices of the Deccan College in its several departments, they readily accepted the suggestion. These contributions are from present and past faculty members and research scholars of the Deccan College, giving a cross-section of the manifold research that it has sponsored during the past twenty-five years. From small beginnings in 1939 the Deccan College has now grown into a well developed and developing Research Institute and become a national centre in so far as Linguistics, Archaeology and Ancient Indian History, and Anthropology and Sociology are concerned. Its international status is attested by the location of the Indian Institute of German Studies (jointly sponsored by Deccan College and the Goethe Institute of Munich), the American Institute of Indian Studies and a branch of the Ecole Francaise d’Extreme-Orient in the campus of the Deccan College. The century of monographs not only symbolises the centenary of the original building and the silver jubilee of the Research Institute, but also the new spirit of critical enquiry and the promise of more to come.

1. Apology. A descriptive sketch of any aspect of language structure is inevitably (and in fact by definition) arbitrary, since it must include some facts and exclude others with no basis for decision other than the author’s feeling about what is important and what is not. Considering the standards of exhaustiveness and systematicity subscribed to by many linguists today, a sketch which purports to cover the whole grammatical apparatus of a living language (as this sketch purports to do) is a highly questionable undertaking. Since I believe in the importance of these standards, I feel that a few comments are necessary on what is included and excluded here, and on my reasons for presenting this sketch in spite of its sketchiness. On the positive side: I have examined every sentence in the date (see 0.2) with a view toward discovering its structure, and with particular emphasis on discovering and describing the irreducible or kernel structures (see 1.0). Since every sentence in the text contains at least one kernel structure ( in fact, the average probably runs closer to two per sentence). this means that there is a reasonably high expectation of thorough coverage in this area. There is of course a possibility that new data would produce new kernel structures, but it is improbable that these would be such as to force any major revamping of the basic structural description given in 1. 1-4 below. Looking at the negative side, there is room for considerable improvement in the parts of the description dealing with transformations (2-3) and morphophonemics (1.6 and elsewhere). The frame of reference here requires that everything not accounted for the kernel structures be handled by transformational rules. All such non-kernel material was collected and examined, and the transformational rules when formulated were checked with an informant in a variety of contexts. Only those rules which proved reliable in a number of contexts have been included here; the remainder will require further work. (During this investigation I have had the growing impression that the list of transformation rules for a living language may well be open-ended, at least with the approach which I have used here. New data will certainly produce new transformation rules, may even produce types not included in the classification undertaken in 2-3 below.) As for the morphophonemics, I have not tried to give a complete and internally consistent presentation, for two reasons. First, in the original investigation and in the presentation itself my main emphasis has been grammatical. Full morphophonemic rules have given at several points in a sketchy form, merely for propose of illustration. The other reason is that the various sources show fairly significant fluctuations in morphophonemic detail, especially in the verbal endings, and until these are checked more fully it would not be profitable to try to give a complete presentation. The morphophonemic rules which appear below are seriously intended, but further work will no doubt uncover more rules, and may well make it necessary to reorder and/ or revise some of those given here.

This sketch was originally completed in 1963, and a lot of water has flown over the dam since then. There have been significant developments in transformational theory. Particularly with regard to questions of derived constituent structure (the problem discussed below in 2.2.0.). In spite of these changes, and in spite of the cumbersomeness of some parts of this description, the original motivation for presenting it is still valid: namely to show something of the structure of Nepali, and it the same time show how this structure can be revealed by a transformation approach. These familiar with other Indo-Aryan languages (and to some extent other South Asian languages) will find that many of the grammatical mechanism shown here for Nepali have very close parallels in the other languages. For the reader who wants a quick overall view, I recommend scanning the following sections first: 1.1-1.4, 1.8, 2.0-2.1.4, 3.0-3.5. These are the least complex, and the most important for getting a picture of the general structure. The remaining material is a necessary part description, but has perhaps the primary function of keeping thing honest- that is, of providing for complete accountability and guaranteeing that the description will actually work.

0.2 Data. The sketch is based on: (1) conversational materials collected from K.B. Singh, of Philadelphia and Kathmandu, over a period of two years; (2) conversational texts in a preliminary version of T.W. Clark’s Introduction to Nepali; (3) about 200 pages of literary Nepali (contemporary short stories), ranging from near- colloquial to highly literary.

0.3 Exposition. The description is presented according to the generative model proposed by Chomsky and other. It consists of rules which convert a specified sequence (input) into a different sequence (output). Each rule applies wherever the conditions for its application are present, through in some cases it is necessary to specify a particular order of application. On the whole the kernel rules (1.1.1-1.6.24) form a continuous sequence which can be interrupted by optional transformations (2.1.1-3.6) at the points where these are applicable. The material given in examples, except where otherwise stated, presupposes the application of all obligatory rules (i.e. mainly morphophonemic rules). In the formulation of rules I have tried for clarity rather than for maximum compactness, though I am aware that there are many notational refinements available for reducing the actual length of rules. 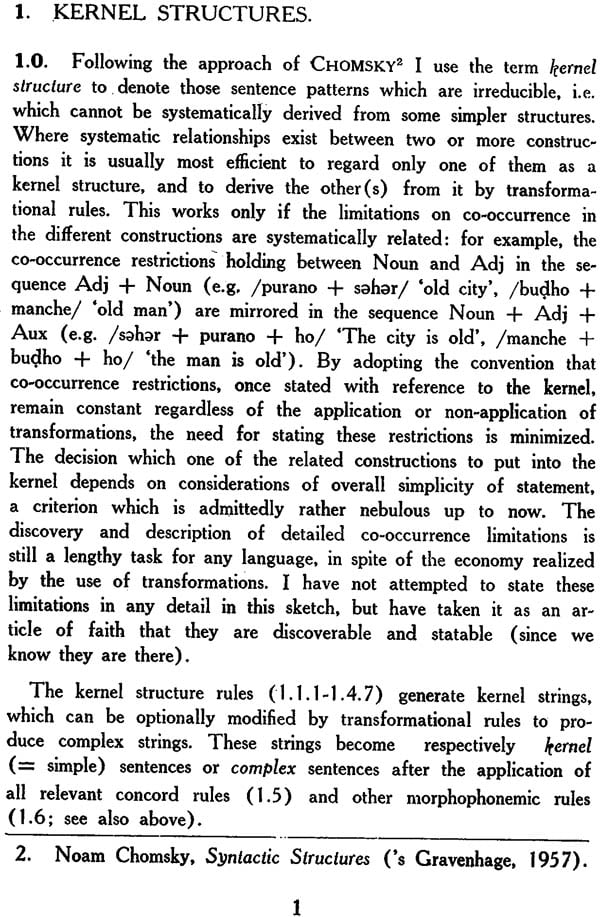 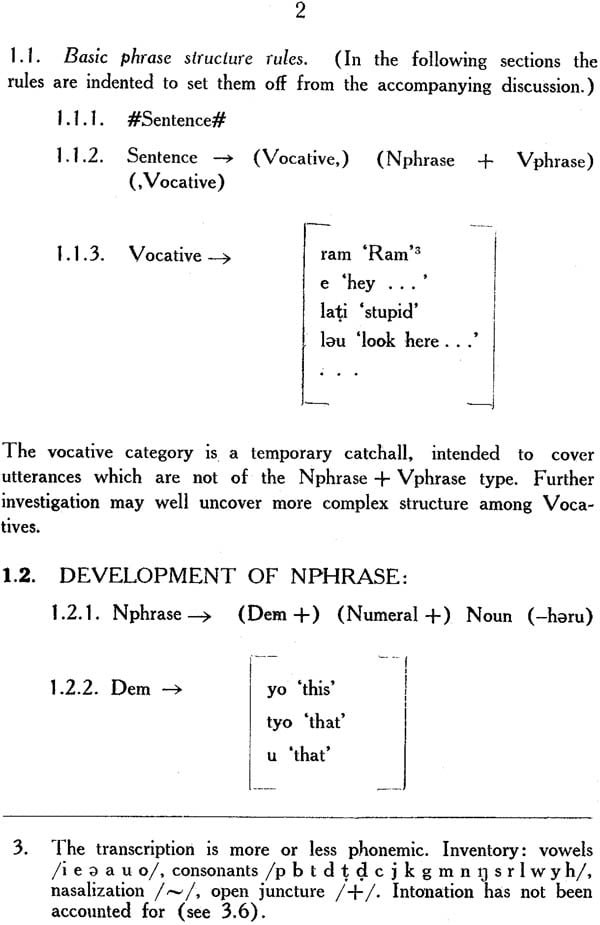 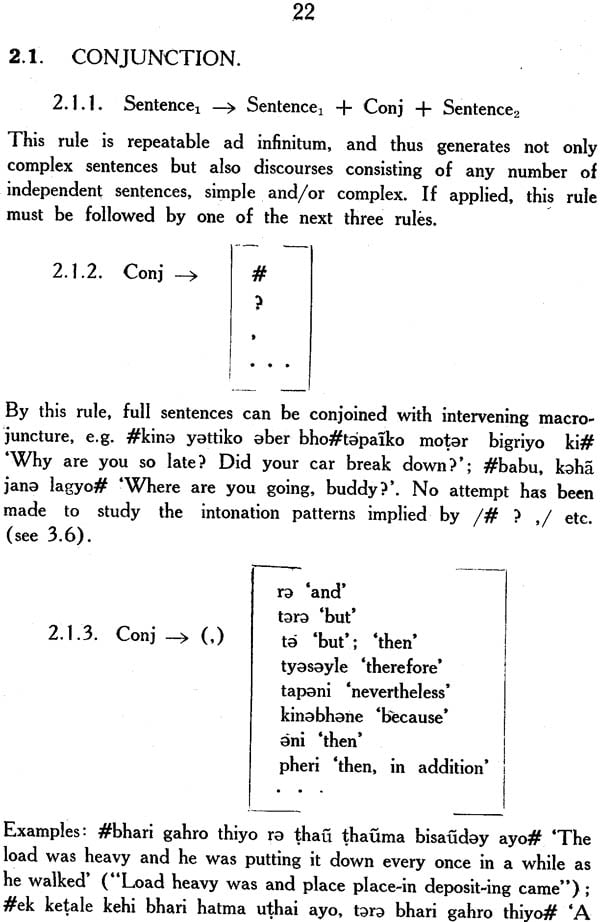 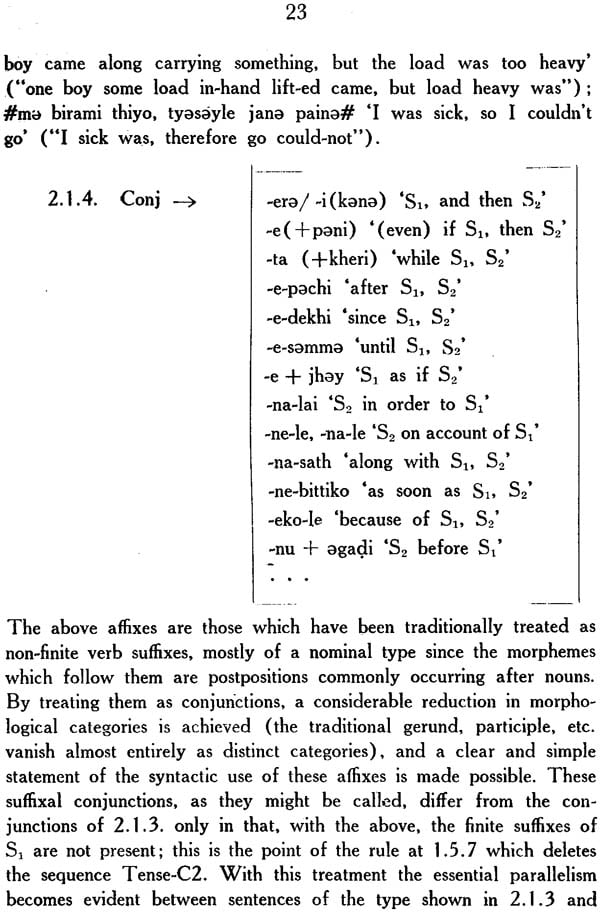 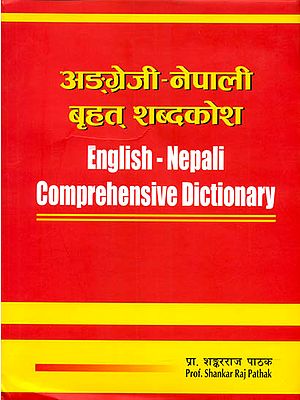 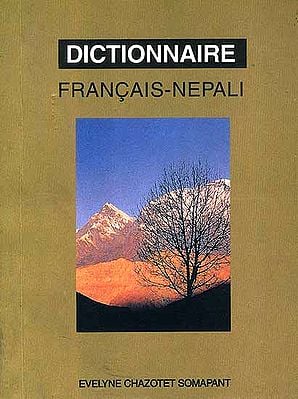 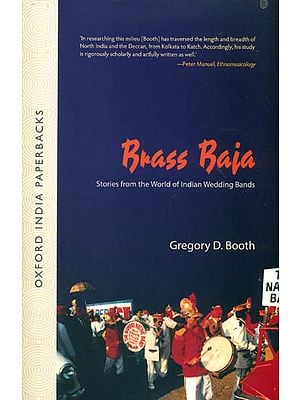 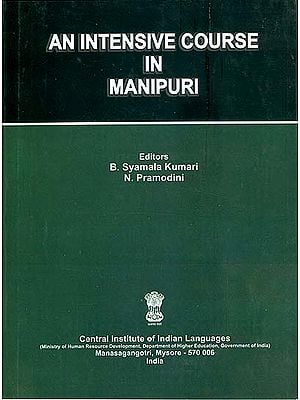 An Intensive Course in Manipuri
By B. Syamala Kumari and N. Pramodini
$43
FREE Delivery