The author in this treatise “Odissi: The Third Classical Form of Indian Music” firmly established the distinctiveness of Odissi music, that distinguishes it from the musical semantics of Hindustan and Carnatic Music. The work delves into the ontological explanation of Odissi and achieves in arriving at the exclusive characteristic of the musical system – the language, dhavani, rituals, social norms, customs and its originality in music. The oral tradition of Odissi music naturally proves its singularity in the context of Independent classical identity.

Many other features of this important study include the style pertaining to several scholar of Odissi music. The history of Odissi music, the distinct musical structure and the context of Odissi music highlighting the living traditions and its musical relevance in Odisha and the fruitful dissemination OF Odissi music as a third classical from, transcending the regional barriers by reassuring its national identity. It has its own uniqueness in it.

The tradition of music in Odisha is very ancient. It has a hoary history and heritage. Its singing style is different from others. Udra style or today called Odissi style had its origin in the very ancient age. The literature, history, the sculptural works in the temples and the writing of Kharavela in the Udayagiri and the Elephant Cave bear testimony to it. Judged from the archaeological point of view the origin of the Odissi dance, music and drama could be traced back to B. C. or in other words, it is two thousand and five hundred years old. The histories, the vicissitudes, the texts, the heritage, the theories in practice, the artists of Odissi music are discussed.

Prominently the lyrics of Jayadeva laid a strong foundation in the creation of classic tradition in Odisha. In course of time, the Odissi music – prabandha and ragas are included in the music of ‘Jagannath Temple’, Jayadeva Gita Govinda.

Owing to the reiterated invasion, the precious scriptures were lost. The Odissi music, its preciality is as clear as broad daylight. It has no harshness and length. It is moving at medium pace; its ragas and talas are elaborate. Odissi music is described as a stage based or performance-oriented music. The Maharis were its first servant and patrons.

This book is a humble attempt to throw light on the singularity, specialty and the peculiarities of Odissi music keeping in view its future and the development and betterment of its tradition. It will go a long way in helping the Odissi singers, teachers, researchers and students in recognizing their national and global identity. As measures to these problems discussions, research, debates etc. have been done at different levels since five to seven decades. Nothing tangible or worth adopting steps have taken so far. So there is nothing wrong, illogical or out of space in giving recognition to Odissi as classical form of music.

The work mainly adheres to the methods. Historical and systematic musicology supported by Philosophical, Scio-cultural and Anthropological the music of Odisha.

Rajesh Sendh (born – 1971) is a Classical Singer, performs the Dhrupad style of Indian classical music and resides in the hold city Varanasi, India. He received inspiration and keen love for music from from his father Sri Madhusudan Sendh and began his initial training of Odissi Vocal Music under the Gurus; Sri Gopal Panda, Sri Bhikari Bal & Sri Ramhari Das at the age of 16 and completed his Bachelor degree with ‘Odissi Vocal’ music from the Utkal University, Bhubaneswar, Odisha.

Rajesh Sendh is qualified in Hindustani Vocal Music from the Faculty of Performing Arts, Banaras Hindu University, Varanasi and completed the degrees of Bachelor, Master & Ph. D. He is trained in Dhamar-Dhamar singing in the traditional system of ‘Dagur-Vani’ under the able guidance of the Dhrupad maestros Pt. Ritwik Sanyal in Varanasi and Ustad Zia Fariddudin Dagar at Bhopal.

Dr. Sendh is awardees of the ‘Junior Fellowship’ for Hindustani Vocal Music by the Department of Culture, Ministry of human resources development, Govt. of India. Prasar Bharti approved him as ‘A grade’ artiste for Dhrupad-Dhamar singing. He has been performing Indian Classical vocal in various prestigious music concert platforms in India as well as accompanying his Guru on various occasions. He has performed ‘Dhrupad Vocal’ at Colorado, USA. Dhupad Mela Committee, Varanasi has honoured him as the best young Dhrupad Singer of the year 2008 with gold medal. Dr. Sendh has been engaged in class workshops for imparting the art of Dhrupad-Dhamar singing to several talented Indian students & students from abroad for last 15 years.

It is an unique pleasure for me to present this important document on Odissi music of Dr. Rajesh Sendh who only research under my supervision for his Ph. D dissertation on the work but also stuying the art music of Dhrupad under my rigorous training for several years in the guru-shishya parampara.

The author in this treatise “Odissi: the Third Classical Form of Indian Classical Music” firmly established the distinctiveness of Hindustani and Carnatic Music.

The work delves into the ontological explanation of Odissi music and achieves in arriving at the exclusive characteristics of the musical system-the language, dhvani, rituals, social norms, customs and its originality in music. The author’s concern for the internal evidences from the oral tradition of Odissi music naturally proves its singularity in the context of Indian classical music by establishing its independent classical identity.

Many other features of this important study include the style pertaining to several scholars of Odissi music. The history of Odissi music, the distint musical structure and the context of Odissi music highlighting the living traditions and its musical relevance in Orissa and the fruitful dissipation of Odissi music as a third classical form, transcending the regional barriers by reassuring its national identity.

The book will enrich the musical experience of all and its importance in the creative pursuits of human life. I wish him all success in his musical career.

To claim speciality of a certain art form, valid documents are necessary to prove it. Odissi as a special form classical music needs to be presented with strong theoretical and practical evidences. Besides the documentary proof its singing style, in the oral tradition is of high standard and quality. Until its ‘classicism’ is not proved, Odissi music cannot be acclaimed as classical.

It is well known to all concerned that the original Indian music was bifurcated in the long past into Margi & Desi. In subsequent years, basing upon some fundamental theories, it was further divided into Avanti, Udramagadhi and Dakshini. Some years ago, the subdivision of Indian classical music into Hindustani and Karnataki (Carnatic) took place. This subdivision should have also included Odissi music. The exclusive characteristics of Odissi music lies in spheres like languge, dhavani, rituals, social norms and customs, drawing and painting, art and architecture, costumes, food etc. Similarly, this music has its own uniqueness in it. It is high time now foe the Odissi singers and musicians to strive hard to maintain this uniqueness and originality for establishing the identity of its own.

This book is a humble attempt on my part to throw light on the singularity, speciality and the Odissi music keeping in view its future and the development and betterment its tradition. I hope it will go a long way in helping the Odissi singers, teachers, researchers and students in recognizing their national and global identity.

I express my deep gratitude and reverence to my Gurus and mentors. My Gurus who initiated me in the art of odissi singing are Shri Gopal Chandra Panda, Shri Ramhari Das and Sri Bhikhari Charan Bal. They inculcated in me the love for the Odissi style, both for practical and theoretical training.

It was good forture to have the dhrupad maestro Pandit Ritwik Sanyal as my guru and guide who has been a source of knowledge and inspiration for me. Words are inadequate to express my gratitude to my guru the dhrupad maestro Ustad Zia Faiduddin Dagar. However, for their guidance and blessing I would not have been able to write it with true musical realization. 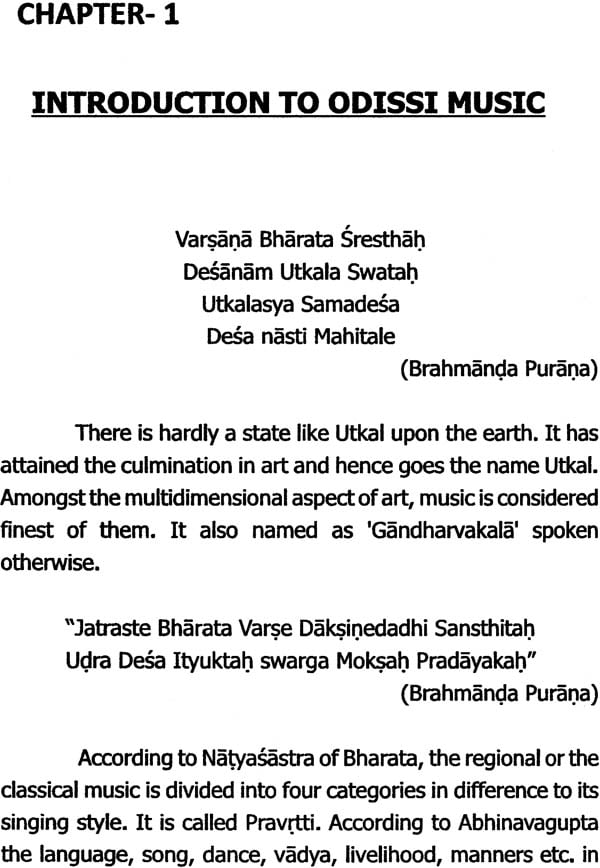 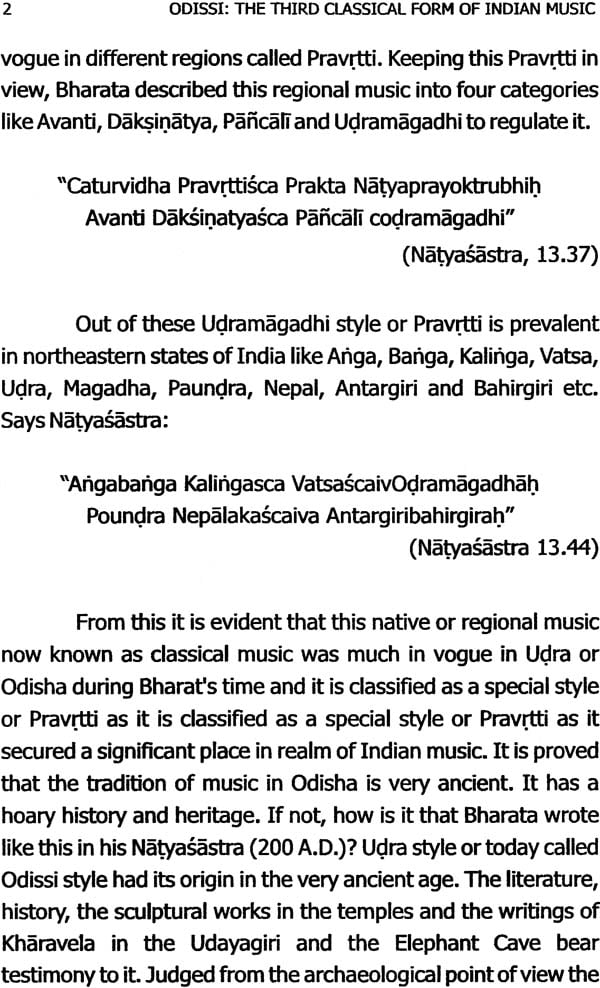 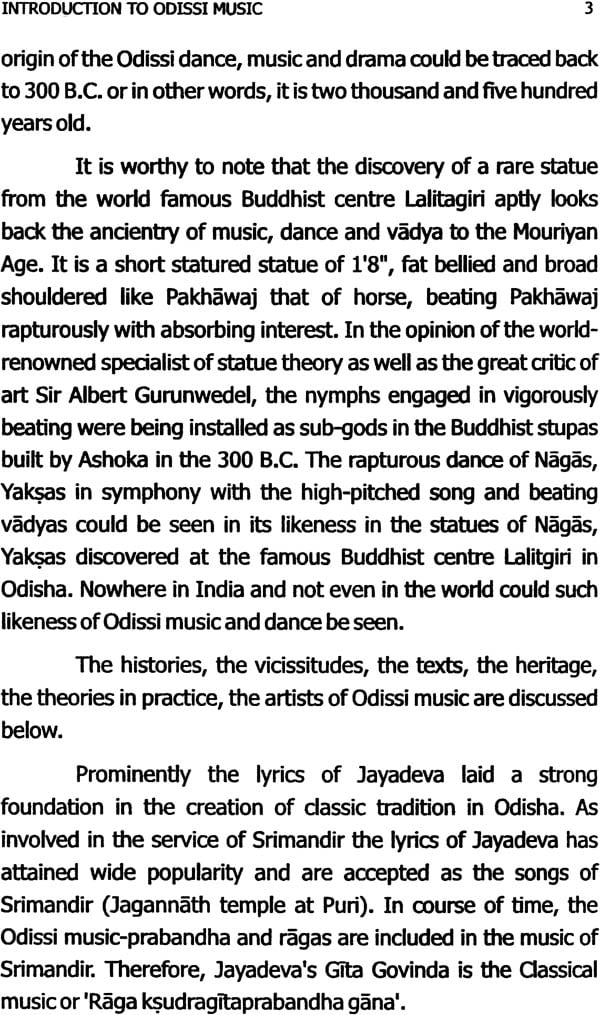 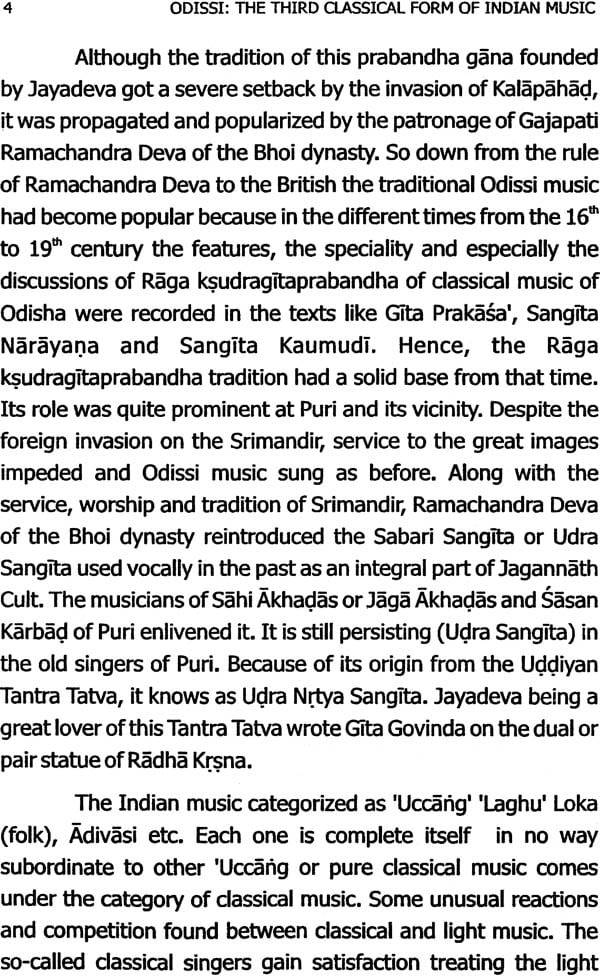 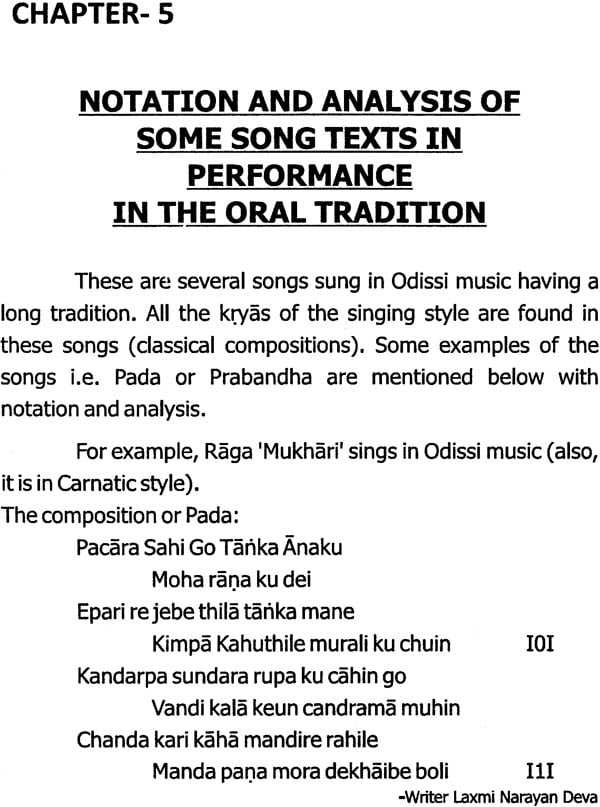 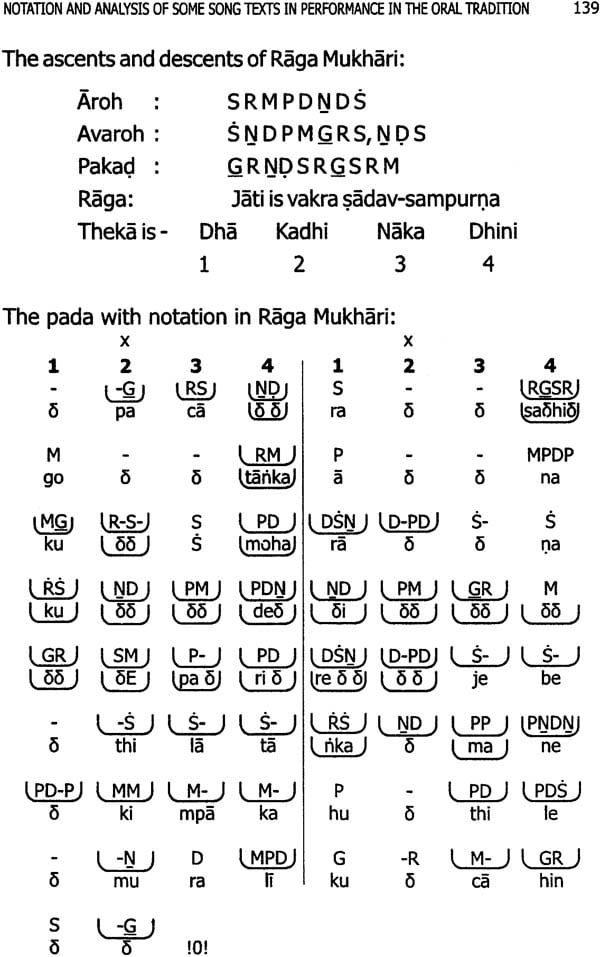 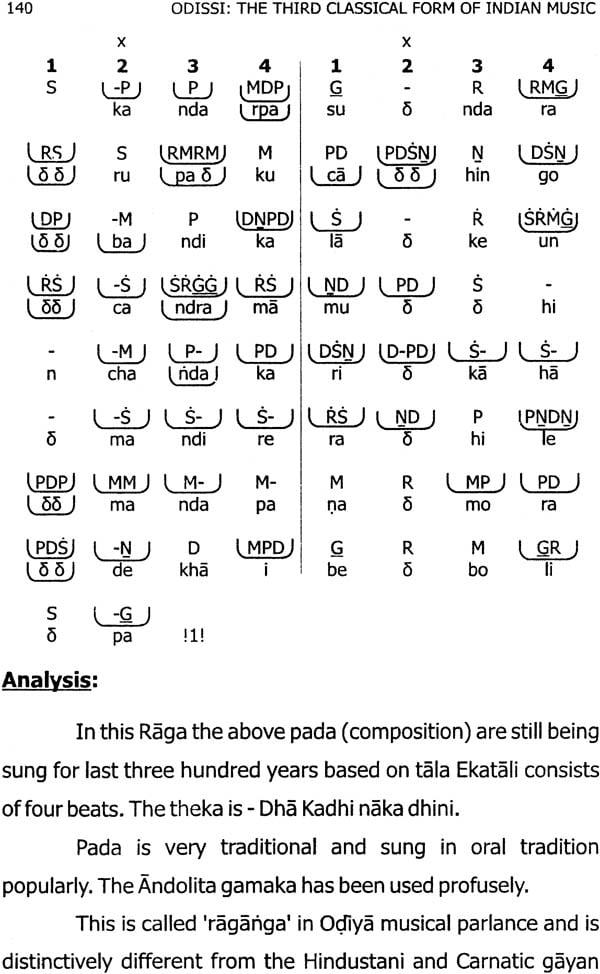 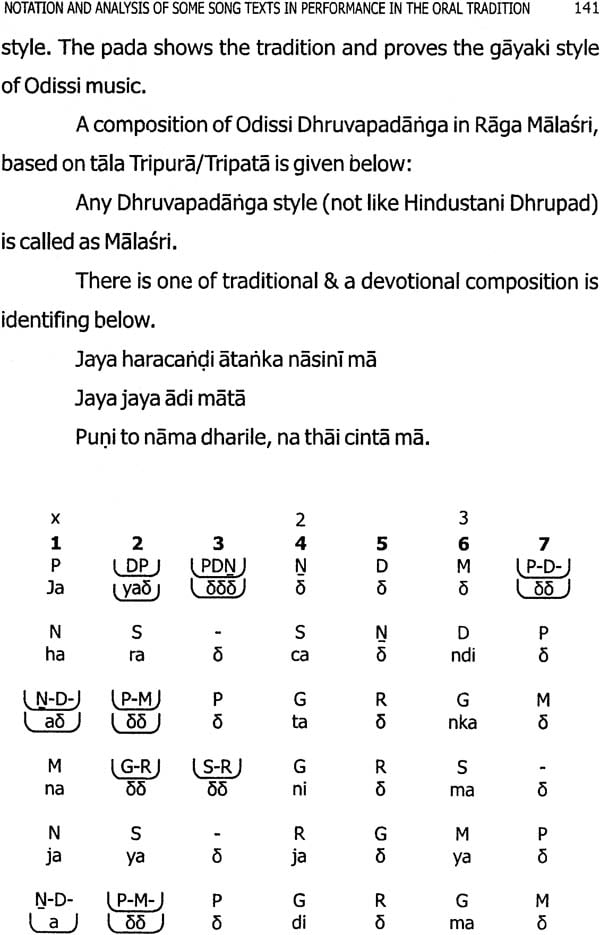 The Making of a Guru: Kelucharan Mohapatra His Life and Times
By Ileana Citaristi
$34.40
FREE Delivery
$43  (20% off)