Parametric syntax – the name of the new typology (comparison of languages) practised by Chomskyan linguists – is first explained and then instantiated by an analysis of the dative subject construction, in the first essay of this volume; the subsequent essays extend this method of enquiry to a wide range of other phenomena in Malayalam (or Dravidian) syntax.

This is an indispensable volume for both experts and students of Dravidian syntax (and indeed, of the syntax of any Indian languages). The lucidity with which the notions of Chomskyan syntax (Government – and Binding theory) are explained also makes it usable as a textbook.

Brought together here are nearly all the essays on Malayalam syntax written over a period of 15 years by K. A. Jayaseelan, one of the leading practitioners of Chomskyan linguistics in India-some of them previously unpublished and some others which appeared in places relatively difficult to access such as the Proceedings of BLS and CIEFL Working Papers in Linguistics.

This book is part of a series of publications called CIEFL, Akshara Series launched by the Central Institute of English and Foreign Languages, Hyderabad, on its 40th year of inception. Established in 1958 by the Government of India to improve the standard of the teaching of English in the country, it acquired its present name and status as a deemed university in 1973 with the inclusion of foreign languages in its programme.

K. A. Jayaseelan is Professor of Linguistics in the Department of Materials Productions at CIEFL, Hyderabad.

The essays brought together in this volume were written over a period of fifteen years. They are presented here in a 'reverse chronological' order, i.e. the later-written ones come earlier in the volume.

The first three essays form a natural group. They were delivered as the first 'Agesthialingom Endowment Lectures' at Annamalai University in August 1995. The more discursive style of these essays reflects the nature of the lecture mode. The nature of the explanations may strike a reader trained in Chomskyan linguistics as overly 'elaborate. But the lectures were meant for an audience of Dravidianists—some of them very eminent, very senior linguists—who were unfamiliar with the concepts of Chomskyan linguistics, or of what is popularly known as `GB'. There is an attempt therefore to put forward some of the basic positions of the Government-and-Binding theory—of what Chomsky prefers to call the 'Principles and Parameters' theory. This will be especially evident in the first part of the first essay.

There is of course a conscious attempt here to counter the opinion often expressed in assemblies of Dravidian linguists, that GB is useless for analysis of Dravidian, that it is hung up on arcane questions which have nothing to do with the central phenomena of our languages. As opposed to this, I attempt to show that GB has very interesting explanations for many such phenomena: in the first essay I look at the Dative Subject Construction and in the second essay I look at the omissibility of pronouns in Dravidian. The third essay looks at the rule which forms reflexive forms in Malayalam. The subliminal text here is a plea to give up the 'mysteries and marvels' approach to Dravidian linguistics that one can trace right from the days of Bishop Caldwell: represented by such claims as that Dravidian has no embedded tensed clauses, or that we have no relative clauses. One does not necessarily add to the glory of one's language by showing that it is so very different that no linguistic theory can account for it.

The fourth and fifth essays, which deal respectively with the pronouns and anaphors of Malayalam, first appeared in volume 3 (1991) and volume 1 (1990) of CIEFL Occasional Papers in Linguistics. They attempt to exhaustively list and describe the pronominal and anaphoric forms of the language; they should thus be of interest to typologists and people attempting descriptive grammars of Malayalam. These essays were in fact written as preliminary sketches for my contribution to a projected volume, Lexical Anaphors and Pronouns in South Asian Languages (edited by Barbara Lust et al. to be published by Mouton) which was supposed to present a "principled typology" of this topic. (Unfortunately, at the time of writing, the latter volume has not yet seen the light of day.) However the fifth essay, i.e. the one on anaphors, is not entirely theoretically 'innocent', besides being typological, it also pushes a new theoretical claim, namely that anaphors are a subclass of pronouns, which was later developed and published as Jayaseelan (1997). A reader who compares this latter paper with the fifth essay here will find some overlap (sometimes verbatim repetition), but the present essay is more exhaustive, i.e. covers more descriptive ground as regards Malayalam.

The sixth essay, on Malayalam infinitivals, was first presented at a seminar on 'Tense and Aspect in Indian Languages' in Osmania University (possibly in 1984); it appeared in CIEFL Working Papers in Linguistics, vol. 2, no. 2 (1985), and also in the proceedings of the afore-mentioned seminar (Tense and Aspect in Indian Languages, ed. by B. Lakshmi Bai and Aditi Mukherjee, Center of Advanced Study in Linguistics, Osmania University and Booklinks Corporation, Hyderabad, 1993).

The seventh and eighth essays appeared (respectively) in the proceedings of the ninth and tenth annual meetings of the Berkeley Linguistics Society (in 1983 and 1984). These last two essays (unlike the earlier ones) were not written for an audience unfamiliar with Chomskyan linguistics; the reader must therefore forgive some unexplained technical terms. However they are still accessible (I would like to believe) to linguists trained in other paradigms. The seventh essay deals with complex predicates in Malayalam; the central theoretical problem noted in it, I have reworked and presented with a more adequate solution in Jayaseelan (1988). The eighth (and last) essay deals (inter alia) with what have been called 'conjunctive participles' in Dravidian linguistics—a very important structure in our languages.

I have not made any changes in these essays, except editorial ones such as standardizing the format of the glosses. (A single exception is a note added at the end of the third essay.) When one rereads one's old papers, there are bound to be many observations, claims and analyses that one no longer agrees with. (An example of such an analysis which immediately comes to mind is the 'flat' structure for Malayalam clauses in the earliest essays, i.e. the seventh and eighth essays.) Inconsistencies among the essays reflect the developments in one's thinking. (Thus, the seventh essay treats the dative subjects as a Case-marking quirk of the verbs involved; the same phenomenon is given a completely different and (I hope) more insightful analysis in the first essay.) It is best to leave such inconsistencies alone, which is what I have done. For I am clearly not trying to present a unified picture. The purpose of bringing together and republishing these essays now is only to make them easily available to Malayalam linguists (or Dravidian linguists, or Indian linguists).

I wish to thank Prof. Pramod Talgeri, Vice-Chancellor, CIEFL, for initiating a book publishing venture as part of CIEFL's silver jubilee celebrations (the 25th anniversary of CIEFL's attaining the status of a university); and Prof. K. V. Tirumalesh for taking upon himself the onerous task of coordinating the venture and for meticulously editing this publication series. 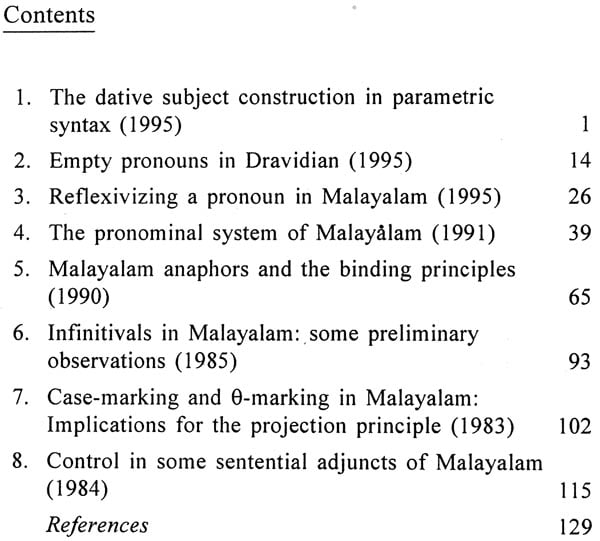 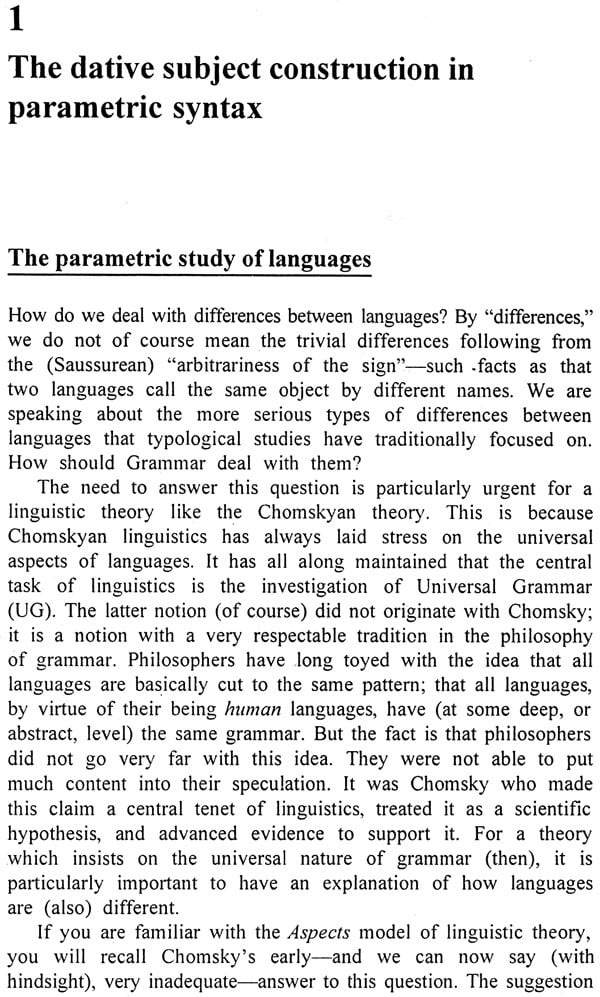 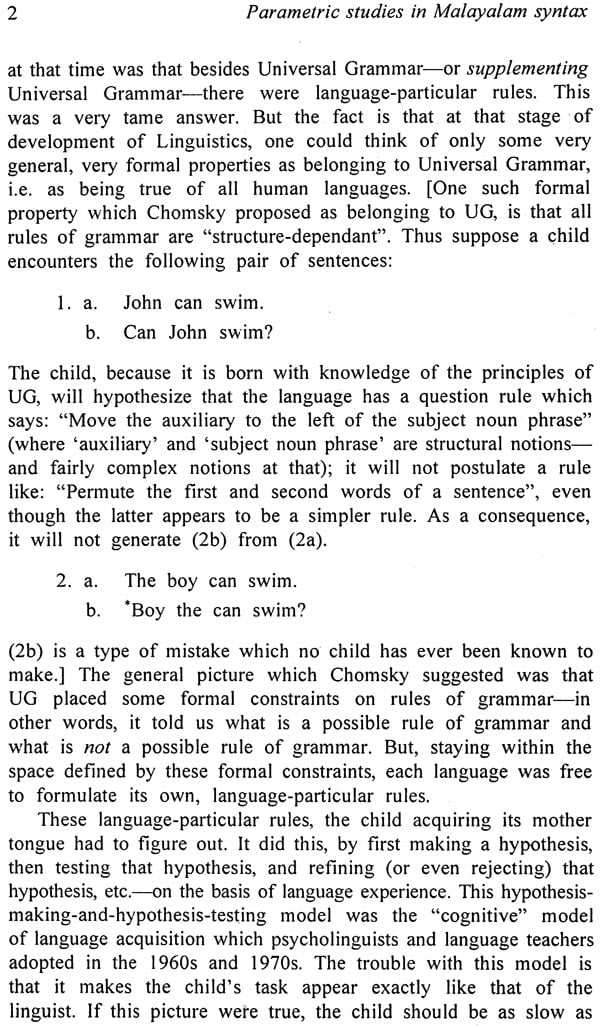 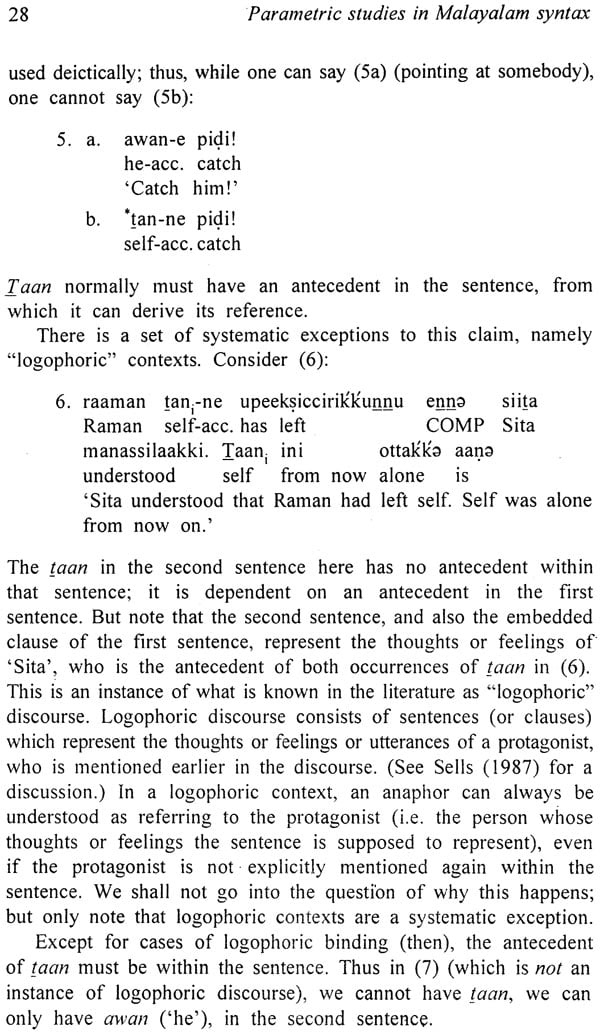 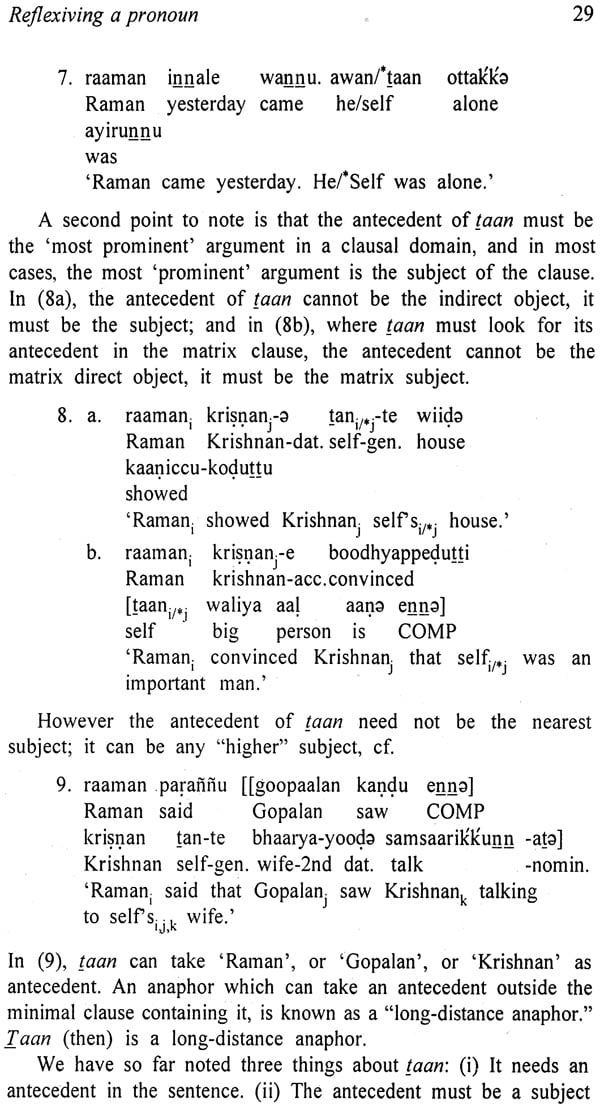 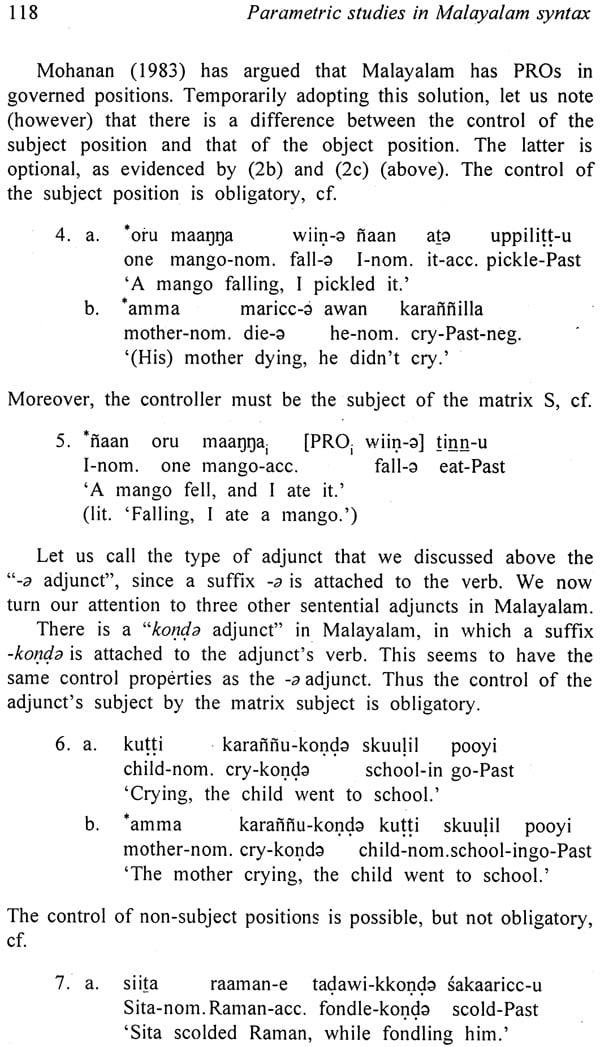 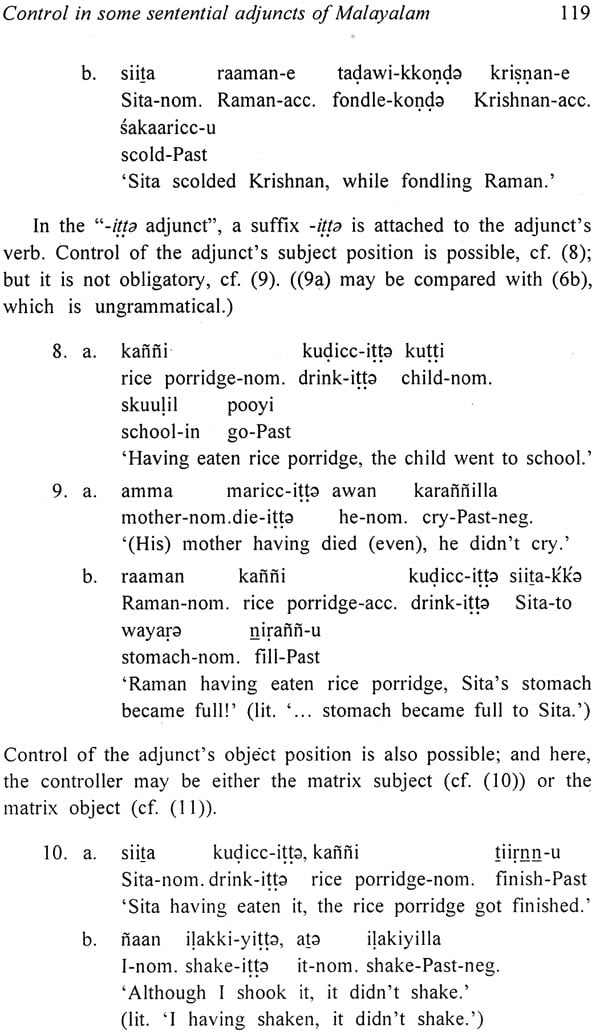 The Tree of Tongues (An Anthology of Modern Indian Poetry)
By E.V.Ramakrishnan
$29.00

Negotiations with the Past: Classical Tamil in Contemporary Tamil
By Kannan M. & Carlos Mena
$52.00