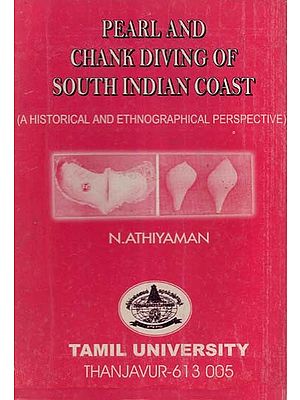 $25.00
Notify me when this item is available
Save to Wishlist Send as E-card Share by Email
FOREWORD

Tamil University has been promoting advanced inter-disciplinary research in Tamilology since its inception. This monograph of Pearl and Chank Diving of South Indian coast - A Historical and Ethnographical perspective by N. Athiyaman is one such venture. It seeks to update our knowledge on the traditional techniques applied by the Tamils through the centuries in collecting the pearl oysters and chanks. It is significant to know that in the entire world these conch shells are available only in Indian waters, that too particularly abundant in the Gulf of Mannar. Palk Bay and Gulf of Kutch. This necessitated the development of efficient indigenous methods of collection of pearl oysters and conch shells.

This book highlights the salient points of these traditional techniques in the light of the author's intensive fieldwork and literary survey. Though a few scholars have already paid attention to this tradition, not much synthesization of the data has been attempted in the light of history of technology. This work is significant in that regard as it tries for the first time to collate, compare and analyse all the available information from the entire south Indian coast.

Besides providing a comprehensive historical overview of the subject, from the early historic times to almost recent years, the author has brought out several interesting findings like the equipment used in the traditional diving. pearl fishing, processing, marketing and socio-economy of the paratavas who are a celebrated fishing community since the Sangam age. The continuities of pearl fishing techniques are discussed on the basis of close field observation. The rich data presented in this book would be very useful to the scholars involved in ethnographic study of Tamils. I wish therefore to appreciate and congratulate the author for his significant accomplishment.

This monograph Pearl and Chan& Diving of South Indian coast - A Historical and Ethnographical perspective is the result of my field work undertaken in the coastal regions of Gulf of Mannar and Palk Bay. During my official stay at Mandapam near Rameswaram between 1987 and 1990, 1 came across the traditional divers who go for chank and shell fishing without using any scientific equipments. This traditional practice, infact, induced me to look into the pearl fishing that existed even before the Sangam period. The striking similarity of such diving practice followed till today compelled me to record this industry, of course, with due in debt to the earlier scholars. Arunachalam had an in-depth study on the history of pearl fishery of Tamil coast based on the literary evidences in early fifties, but he did not specify much on the mode of traditional diving. Hence, I felt a study, was essential for a comprehensive report on the mode of traditional diving as there was no attempt made, in. this arena. Since then I was looking for an opportunity to study this tradition in detail. The financial assistance extended by the Nehru Trust helped me to undertake a modest survey in Gulf of Mannar region which threw vast scope of the study. On seeing the potential of the area my parent institution Tamil University has supported financially to undertake this study for entire South Indian coast particularly Palk Bay region.

The substantial outcome of the work is based on the field observation made in the regions of Gulf of Mannar and Palk Bay and to some extent the coastal regions of Thanjavur District and Kerala State. The literary and historical records helped me to identify the distribution of pearl oysters and chinks in the international and Indian waters and their form of breeding and habits. The historical records along with personal enquiry with. the contemporary fishermen who are still actively involved in chank fishing helped me to fathom the history of pearl and chank fishing along the south Indian coast and socio-economy and cultural background in the given environment such as their mode of fishing, shark charming, etc. The deficiencies and deviations of the facts in the ancient records are also dealt with. The recent research on the .pearl forming and chank fishing by the Central Marine Fishery Research Institute is also taken in to account in this-work.

The evidences used in this monograph include the information from the Sri Lankan pearl and chank fishery without which this work does not get complete .as The pearl fishery of Gulf of Mannar and Palk Bay region of Indian and Sri Lankan coast co-existed till pre-independence. The nonexistence of any political and social, barrier in this region virtually speaks of the same people and method. A few accounts of various authors on the pearl fishery are also given in appendices by giving one representation for every historical period. The figures and plates are given in the respective chapters for better understanding of the industry. Besides ail these accumulated data, this book is not complete in all respect when compared with the vastness of the area. The book exposes the importance for in depth study by the academic world in various aspects of this fast vanishing practice.

The ocean with its vast amount of natural wealth has supported man for his livelihood right from the prehistoric times. From food to minerals, the resources of the sea are incalculable that there are many more things still remain to be exploited. Among exploited materials pearls, chanks and shells, which are extensively used for ornamental purpose occupy a vital place in the human history as the possession of these materials is considered as a status symbol. The aesthetic appeal of these objects attracted the people beyond Indian subcontinent.

Pearl (muthu in Tamil) is considered as the queen among the jewels. The occurrence of pearl in the cultural context goes back to the Harappan period. Since then, it seems pearl was one of the important articles of trade in India. Both the Hindu and Buddhist tradition consider that pearl has a spiritual value. The evidence from the literature and epigraphs shows the different varieties of jewels associated with the pearl, which reflects its aesthetic value. Further, ornaments like necklace and earrings studded with pearls are considered to have invigorating power.

In Tamil Nadu, the history of pearl goes back to Sangam period (3rd century BC - AD 3rd century). The proximity to the Gulf of Mannar led its association with Pandya kingdom. This can be seen from the frequent mentioning of pearls and Chanks in the Sangam literature. The post Sangam work Silappatikaram is the outcome of injustice caused to Kannagi the heroine of 'anklet story' exposed when Pandyan saw the semi-precious stone in the Kannagi's anklet rather than the pearl that was used in his queen's anklet. The names prevalent in Tamil Nadu, even today with prefix or suffix as muthu (Pearl) suggest the significance of the pearl in Tamil society throughout the history.

Like pearl, the extensive use of chank in the Harappan period was testified with the chank industry site at Nageswar. Commercially, these chanks are used to make ornamental articles, bangles, rings, spindles and for medicinal purposes. Until the early part of the last century, this had a great religious value throughout the Indian subcontinent and now it is confined to West Bengal only. The sinistral type of chank (right whorled chanks named as valampuri in Tamil) has still a great value, as it is considered as a symbol of prosperity, to be dear to Lord Vishnu. Such types of chanks are kept in temples and worshiped at home also. The earliest literary notice of the use of chank occurs in two great Indian Epics, the Mahabaratha and Ramayana. The Mahabaratha alludes to the various types of conches used by Lord Krishna and the Pandavas.

The East Indian territories have much regard to the chank even now. Discs cut from chank shells are also in use in Tibet and the Abor and Naga Districts of Assam. 'Besides, small chanks are used as feeding spout to the children and as amulets, since it is believed to have a spiritual value that keeps away the evils. Small-sized chanks are tied in the neck or head of the cattle even today in the villages of Tamil Nadu. Hence there is no wonder this chank fishing attracted the people from early times.

These chanks are blown in the religious affairs of Hindu temples all,' Buddhist Monasteries, Besides, donation of the chank to temples is considered as auspicious even today. As a musical instrument, those shells similar to chanks were used in the other parts of the world. In the beginning of Bronze Age, the conch had already spread inland in Europe. Equally, the use of conch shell in ancient times in American continent is also attested by the archaeological findings.

Wonderful and different coloured pattern and shapes of the molluscan shells aroused the curiosity of man. This interest led him to find many ways of usefulness of these shells, ranging from vessels for keeping the food and water to ornaments of high value. In ancient times, the cowry shells were used as a currency. In Chinese oracle bone inscription and inscription on bronze vessels of the Shang (16th-11th c.BC) and Zhou (11th c.-221 BC) dynasties frequently mention gift of cowries, putting cowries in the treasury, seizure of cowries and use of cowries as a currency. Shells of various kinds are also recovered in the sites of Mesopotamian and Harrappan settlements.

Shells are auspicious things and are generally associated with the Lakshmi, the goddess of prosperity and they were believed to promote fertility and luck. In west Bengal, offering of the cowry shell to the god by the woman is mandatory along with other items on the 21st day after she delivers a baby. This custom is still prevalent in West Bengal.

Generally, these shells are used to produce novel items such as table lamps, lamp shades and domes, doll, garlands, pendants for chains, necklaces, ear drops, beads for the neck, hair pins, sculptures of God and Goddess, incense stick stands, flower vases, shell screen for windows, door curtains etc. These are gathered in the coastal regions of Tamil Nadu and Maldives Islands. Presently different kinds of shells are collected in the Gulf of Mannar and Palk region by local fisherman's community without any scientific means. 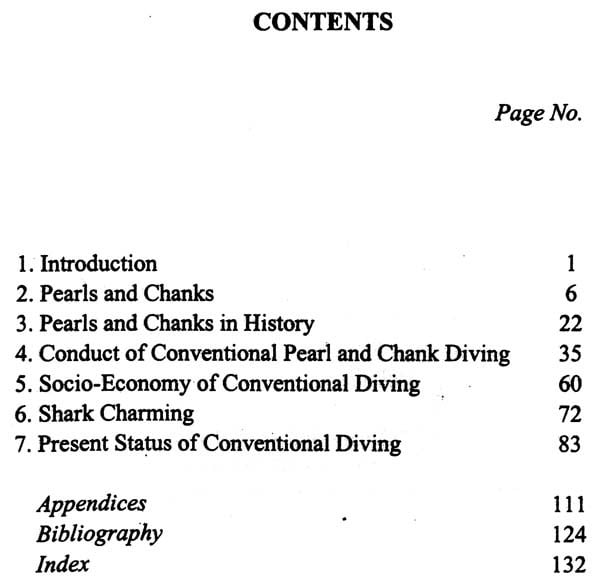 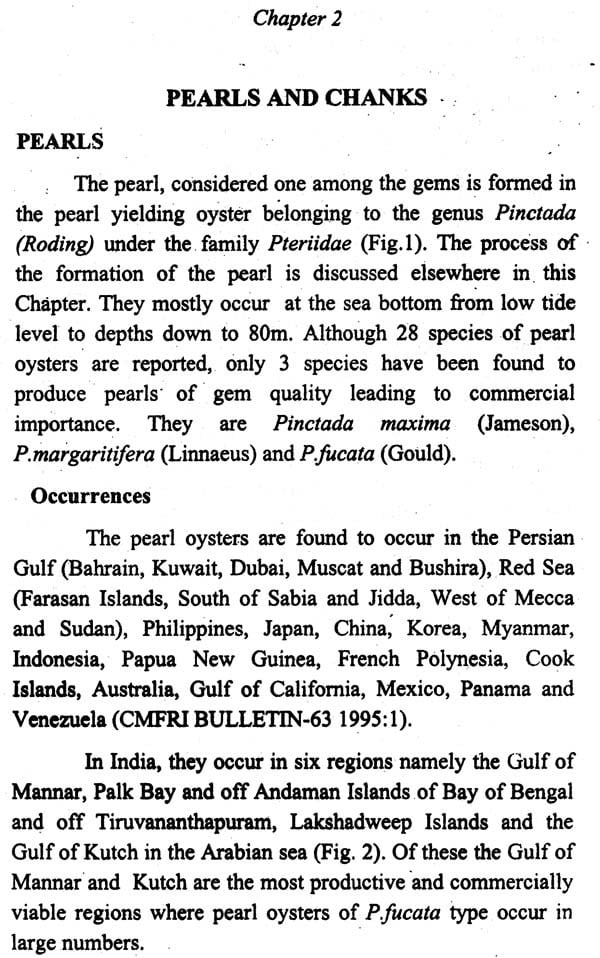 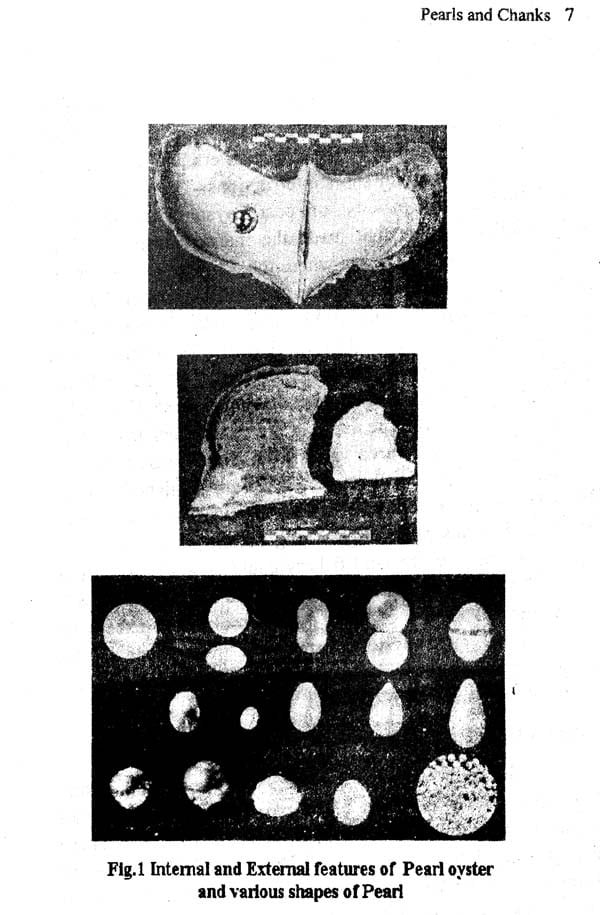 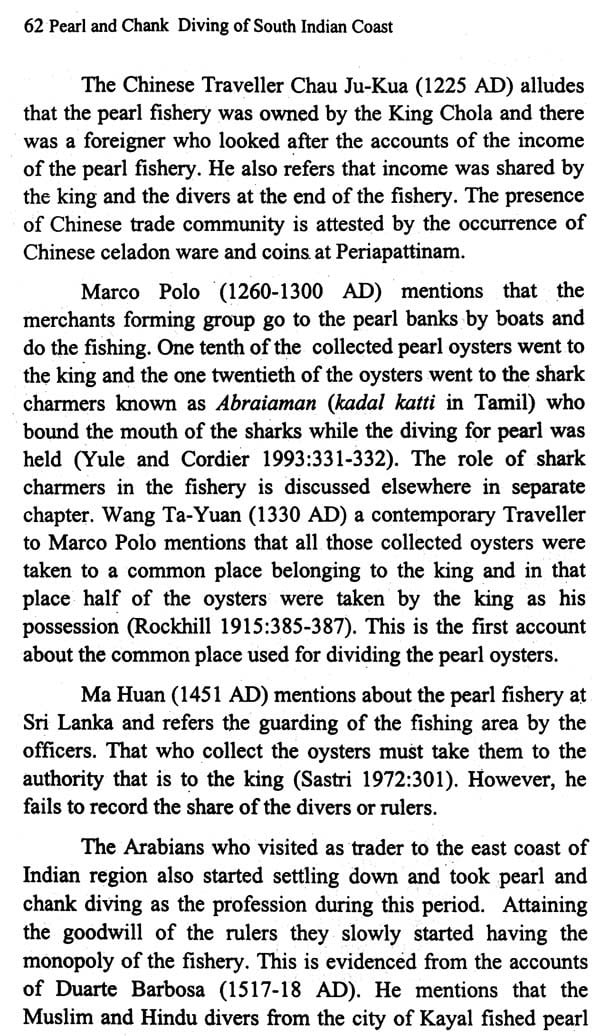 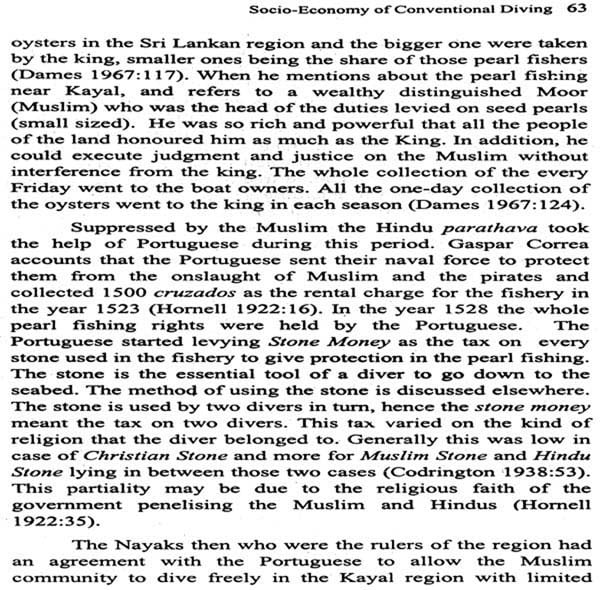 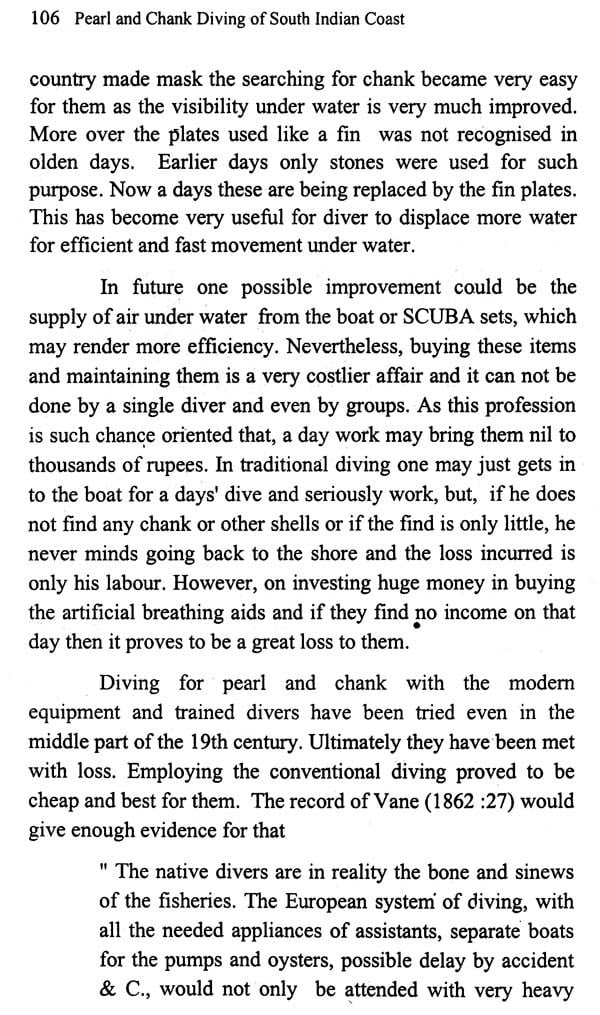 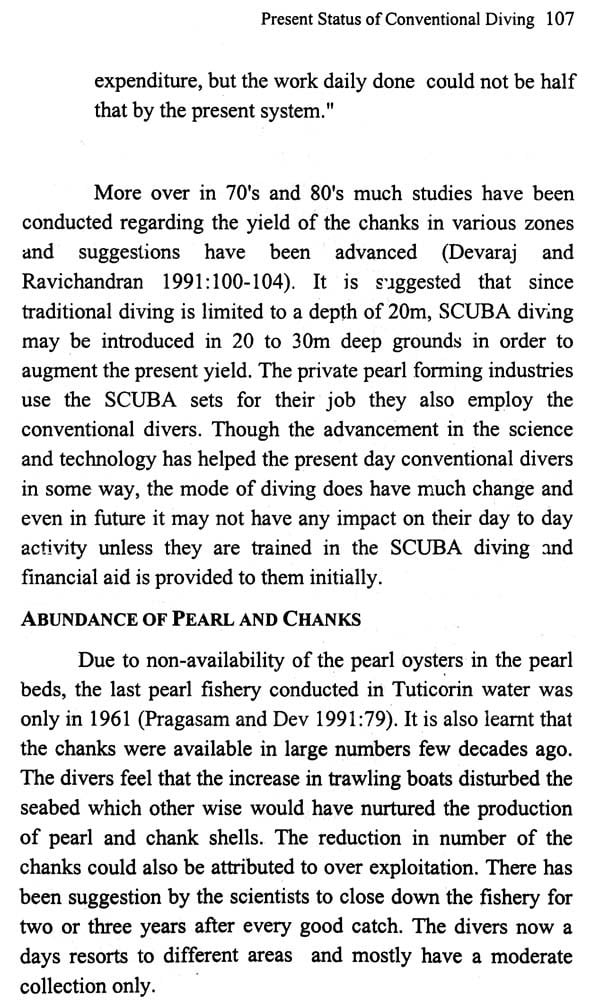