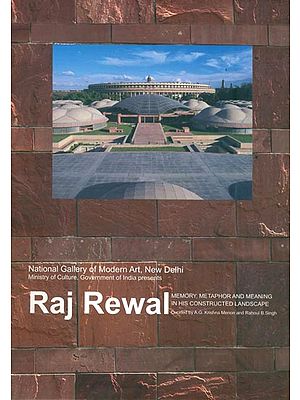 Raj Rewal: Memory, Metaphor and Meaning in his Constructed Landscape

The retrospective of the works of Raj Rewal is the first major exhibition on architecture at the National Gallery of Modern Art, New Delhi. It offers an opportunity to not only to celebrate the works of a prominent and prolific Indian architect, who has received considerable acclaim both in India and abroad, but also to gain insight into his methods, and thereby initiate a long overdue discourse in architects and architecture in India.

He has thoughtfully sought to create an ‘Indian Identity’ in his projects. His strategy recalls memories of Indian civilization-al value inherent in the historical architecture of the country and transforms them through the use of contemporary architectural metaphors to invest his designs with meaning.

In a rapidly globalizing environment, which is homogenizing the use of technology and materials, his architecture presents us alternate contemporary models of autochthonous architectural production. Not surprisingly, His constructed landscape is humane in scale and spatial experience.

A.G. Krishna Menon has been practicing as an architect, urban planner and conservation consultant from Delhi since 1972. In 1990, he co-founded the TVB School of Habitat Studies in New Delhi and was its Director from 1993 and 2007. He is a passionate interlocutor on the architectural and planning issues of Delhi and is actively engaged in academic and field research on the subject. His writings have been published in professional journals and several academic books. He is currently the Convener of the Delhi Chapter of INTACH and is spearheading the campaign to nominate Delhi to the list of UNESCO World Heritage Cities.

Rahoul B.Singh obtained his degrees in both architecture and in the fine arts at the Rhode Island School of Design, USA and established a design studio in the New Delhi in 1998, and has since built extensively in India and in the Middle East. He is currently a member of the visiting faculty in the Department of Architecture at the School of Planning and Architecture in New Delhi and serves as a Senior Consultant to the Delhi Urban Arts Council [DUAC], he is a regular contributor to journals in architecture, and is the author of the book, "Gardens of Delight".

As the Director of the National Gallery of Modern Art, New Delhi [NGMA], I am extremely delighted to organize the retrospective exhibition of one of India’s most celebrated architects Raj Rewal, Entitled ‘Raj Rewal: Memory, Metaphor and Meaning in his Constructed Landscape’, the exhibition is jointly curated by A. G. Krishna Menon and Rahoul B. Singh and presents five decades of the acclaimed architect’s complex and multi-layered works.

While preparing for this exhibition, I was reminded of a quote by Winston Churchill: ‘We shape our buildings; thereafter they shape us.’

Several exhibitions held at the NGMA, New Delhi, have celebrated eminent modern and contemporary artists from the field of visual arts. ‘Raj Rewal: Memory, Metaphor and Meaning in his Constructed Landscape’ is a unique, since it presents architecture as a creative discipline. Raj Rewal’s architecture is an experiential phenomenon in space and form. His milestone works include the Asian Games Village, the Nehru Memorial Pavilion, the Library of the Indian Parliament, the National Institute of Immunology, the Lisbon Ismaili Centre in Portugal and the Indian Embassy in Beijing. Deeply influenced by the Indian aesthetic order and spirit, Rewal’s works are rooted in the ethos of the land, and are significant landmarks of ‘modern’ architectural heritage that we as a society need to conserve.

The exhibition presents Rewal’s works including sketches, drawing, models and films at the NGMA’s two main galleries – the Jaipur House and the Temporary Exhibition Gallery in the NGMA’s new wing. I believe that today, such themes are relevant in redefining the role of museums and the concept of design. The NGMA fulfils its role as a centre for the arts in India and is a premier venue for exhibitions, especially curated with an interdisciplinary approach. Organizing an exhibition on one of the most creative professionals in the field of architecture in this historic building is a privilege indeed. It is also a matter of great pride that the NGMA has evolved as a space with a distinguished record of presenting dynamic projects. This space has inspired us to think bigger and has given us the vision, energy and capacity to realize projects that are thought-provoking in content and complex in design and display. With every exhibition, this vibrant space has accommodated new ideas and structures and has generated excitement and an unforgettable experience for the visitors.

I wish to thank the curators A.G. Krishna Menon and Rahoul B.Singh for their perceptive approach and their contribution towards the comprehensive catalogue on Raj Rewal, which I published by the National Gallery of Modern Art, New Delhi, in conjunction with this exhibition, I extend my acknowledgements to Ministry of Culture, Government of India. I also acknowledge the sincere efforts of the entire NGMA team towards the successful execution of the project. This exhibition along with its accompanying catalogue makes a long due contribution to the Indian architectural studies, which will benefit students, researchers and scholars to gain a deeper understanding of Raj Real’s oeuvre. Finally it also marks a significant step towards portraying the intrinsic relationship between art and architecture. 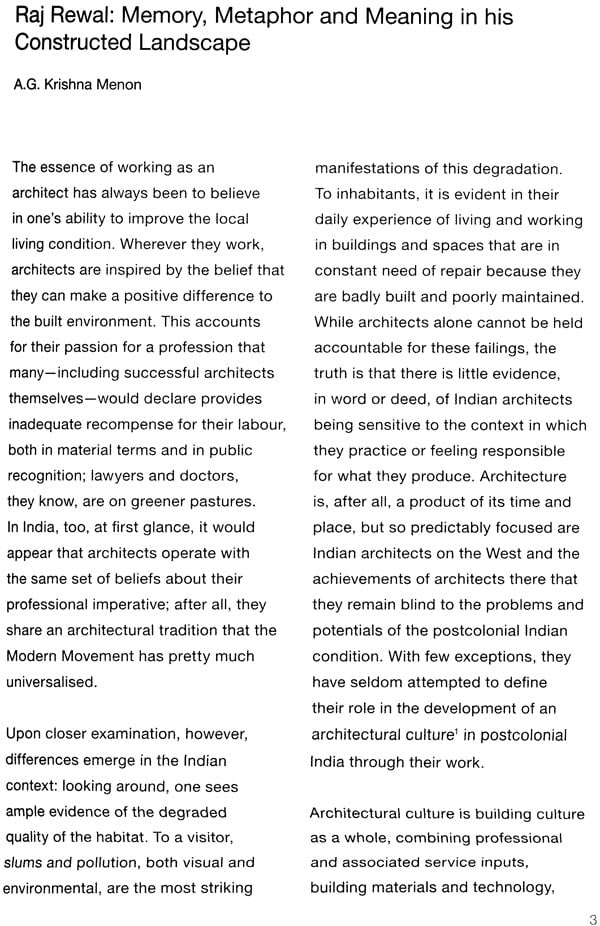 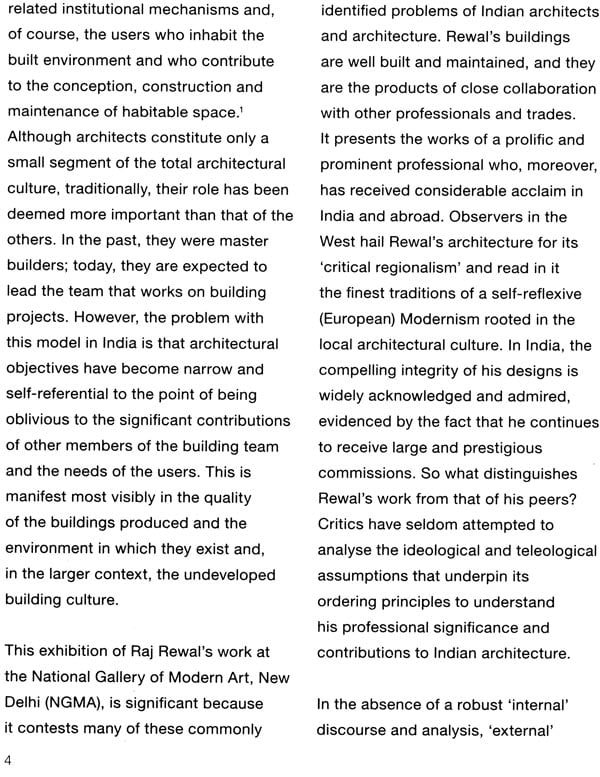 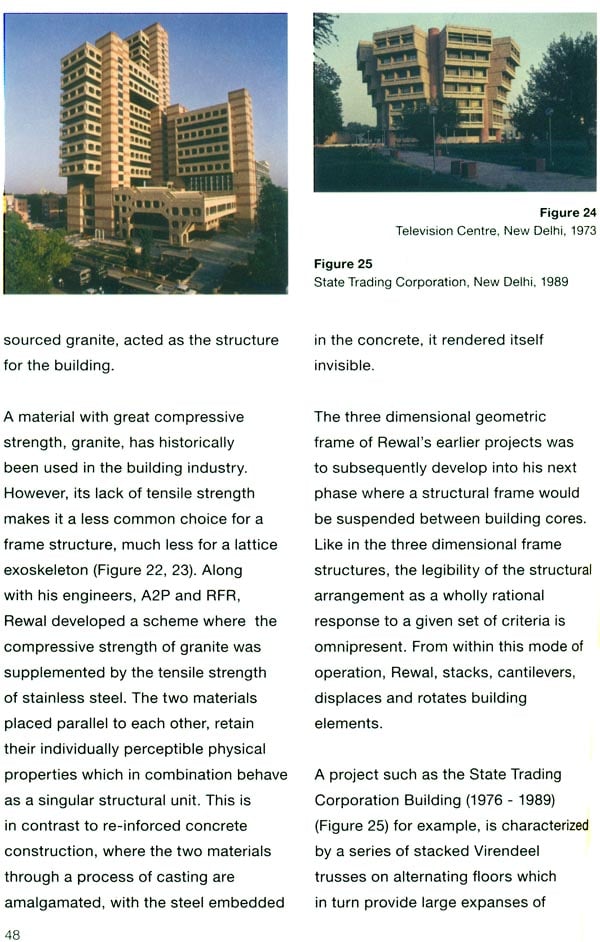 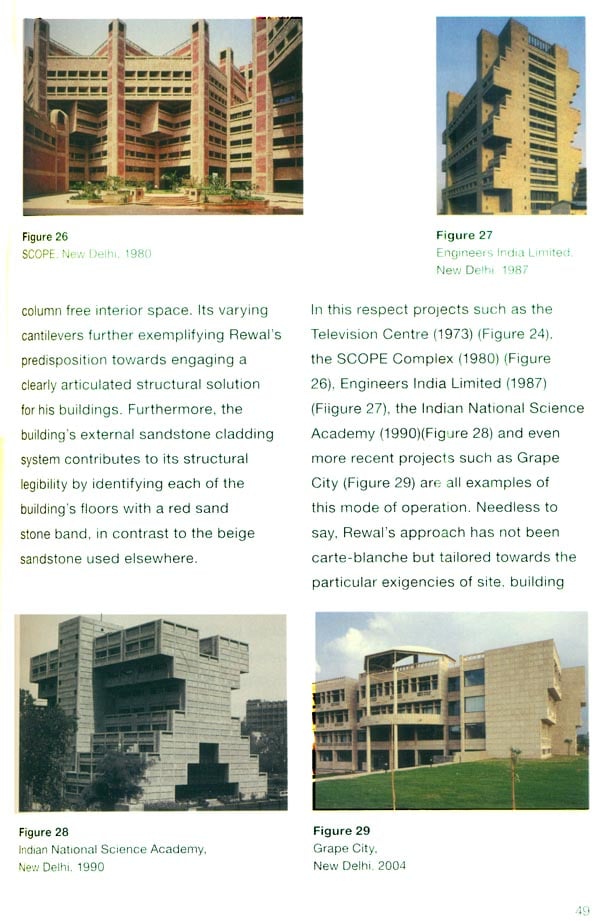 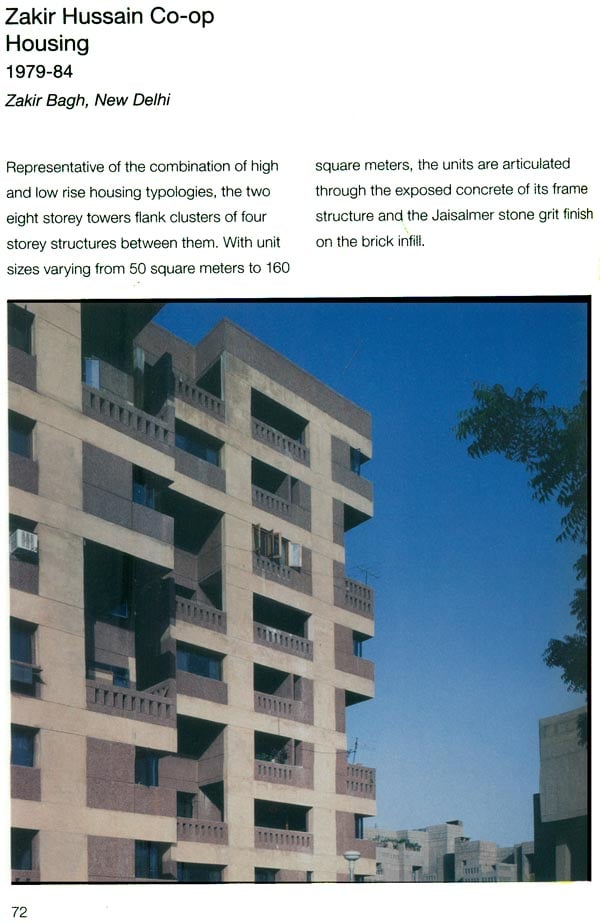 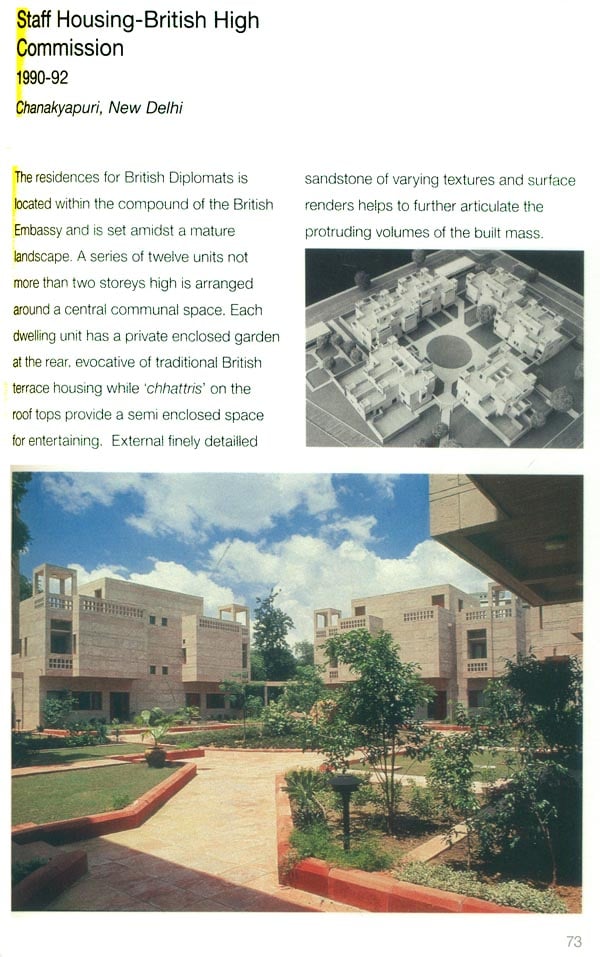 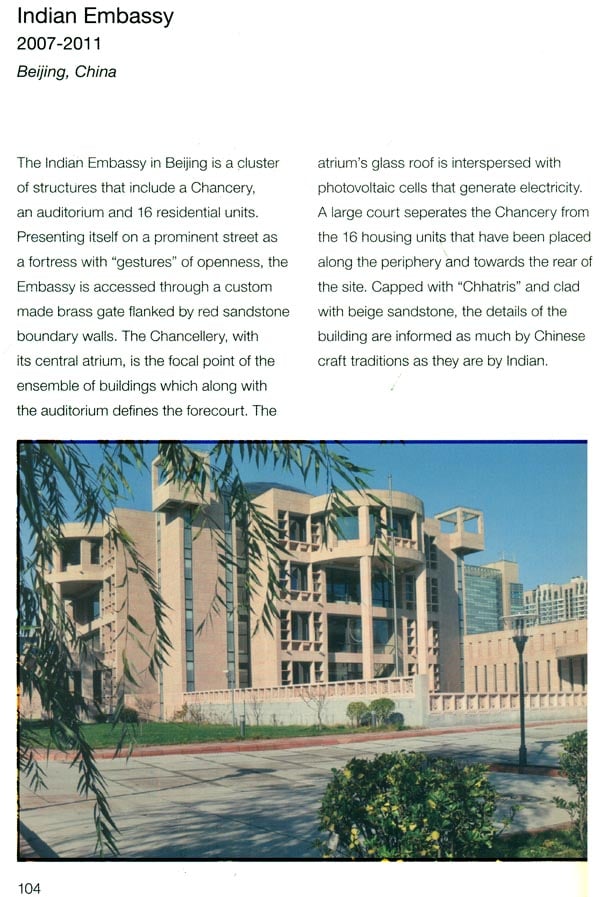 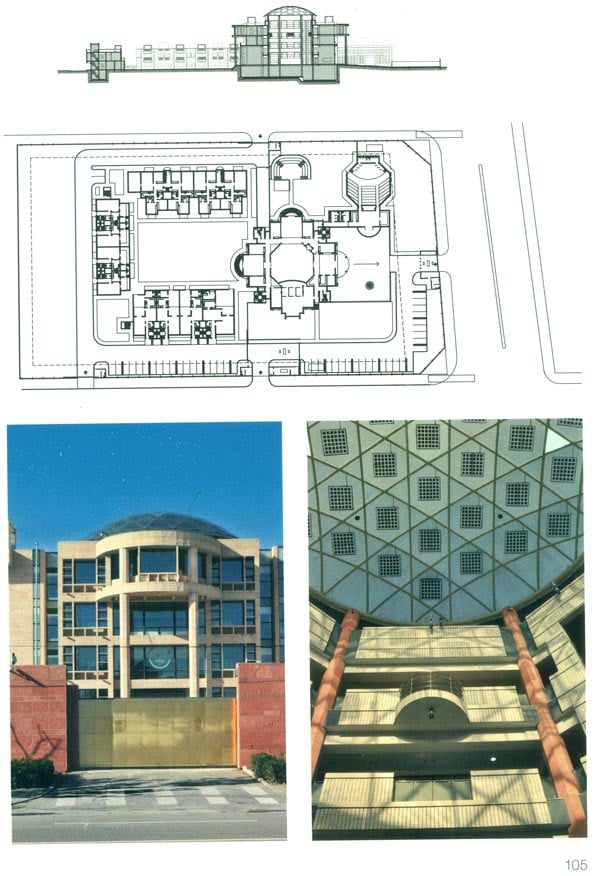 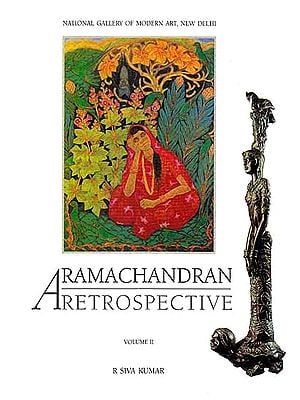