The idea of politics hardly finds an expression elsewhere as clearly as in Mahabharata. This work thus investigates the political thought explicit in Santi-Parva and emphasizes that Mahabharata is a text in the study of politics, apart from the perception of it being a great epic and a text of high literary value. Whatever be the notion of politics we contemplate upon, it finds an articulation in Mahabharata. As the Greek tradition of thinking is the base of Western politics, Santi-Parva of Mahabharata represents the Indian notion of political thinking, though there remain many similarities and dissimilarities between the two systems.

The book collects, analyses and examines the internal evidences from Santi-Parva and also from other parvans of Mahabharata to reach a decisive conclusion, making the work a composite result of textual analysis, related literature and subjective contemplation. It clearly shows that the idea of politics is not separated from the idea of ethics. Rather they are intertwined.

Dr Priyanka Pandey is an upcoming Sanskrit scholar with a penchant for serious researches on Indian classics. She got her PhD for the thesis, "Perspectives of Rajadharma in Mahabharata: A Critical Analysis" from Jawaharlal Nehru University, New Delhi. This book Rajadharma in Mahabharaia with Special Reference to Santi-Paroa is an offshoot of her research project.

Dr Pandey has presented articles in many national and international seminars and has ten articles published in journals/ books of repute to her credit.

Mahabharata is a huge monument of Sanskrit literature. It is generally considered as a literary text and is one of the two great epics of lndia. It is the encyclopedia of ancient India as it deals with different subjects in different contexts. It was enlarged at different periods by persons of different regions, time and mentalities. It occupies an important place in Indian tradition. Its importance lies in the fact that it has summarized the views of Indian political thinkers and further, its writers have discussed numerous political problems in detail and supplies various problems regarding the relation between man and state. Many scholars have tried to study the political ideas contained in Mahabharata, many books have come to light dealing with the same subject. The idea of politics hardly finds an expression elsewhere as clearly as in Mahabharata. The present work, in this regard is a modest attempt in the same direction. The purpose of the present work is to investigate the political thought in Santi-Parva of Mahabharata. The focus is to carve out the idea of the politics in the text. As we know in recent debates on the idea of the politics there are several positions like modernist and postmodernist.

One suggests that "political" defines the activities related to the statecraft, whereas the other proposes to take over personal as political. The main intention here is to make an intervention in the contemporary debate from the point of view of Sanskrit knowledge tradition. There are scholars in the West who have recently started exploring the political dimension of this knowledge system, however, their inability to comprehend the larger canvas of Sanskrit knowledge system fails them in such an endeavour. This book anchors itself in longer context of Indian philosophy and tries to read the political context of the text, which is considered merely as a religion or a literary text.

The aim of this work is show that Mahabharata, apart from being an epic, is also a text in the study of politics. Whatever notion of politics we take, there is a possibility to find good amount of resources in Mahabharata to articulate an Indian notion in this field. By comparing the notion of politics in the West, taking mainly the Greek tradition of thinking represented by Aristotle, and the Indian tradition represented by Santi-Parva of Mahabharata, I would like to argue that there are many similarities and dissimilarities between the two. Our central aim is to show that the idea of politics is not separated from the idea of ethics. The point perhaps will become clear if we explore the way these institutions are conceptualized. Therefore it is highly essential to study the notion of politics in Mahabharata in the present context. The major focus areas of this work are:

1. It has tried to interpret the original Sanskrit text, Santi-Parva in relation to its political thinking.

2. Beside this, other writings on Indian political thoughts are also taken into account, via books, journals, articles, etc.

3. This work is focused on both the primary and secondary writings on Mahabharata, by enquiring the basic political principles in Santi-Parva.

(The complete edition of Mahabharata (18 parvas, 89,000 verses in the constituent text and elaborate critical apparatus; 19 volumes; no. of pages: 13,000 + demi quarto size) was released on 22 September 1966. This edition was prepared with painstaking efforts of scholars for about five decades consulting 1,259 manuscripts.)

Other secondary sources consist of Bharatabhava-Dipika, Nilakantha's commentary on the epic, different translations of, and general works on Mahabharata, Some other books like Ramayana, Manu-Smrti, Kamandakiya Nitisara and Sukra-Nitisdra have also been taken into account. Many books on political science have also been referred. And the writings of Indian and Western scholars have also been consulted. At some places archaeological, numismatic and epigraphic evidences have been used.

Beside the utilization of the secondary sources, attempt has been made to go through the reviews both of the occidentalists as well as of the oriental lists. A glance at the reviews of the books has helped in two ways. One, it has given information about the limitations as pointed out by the reviewers in the scholarly works, and two, it also has made the researcher balanced in thought and meditation on the discussed problems. Hence the chapter-wise analysis of the topic has been made. 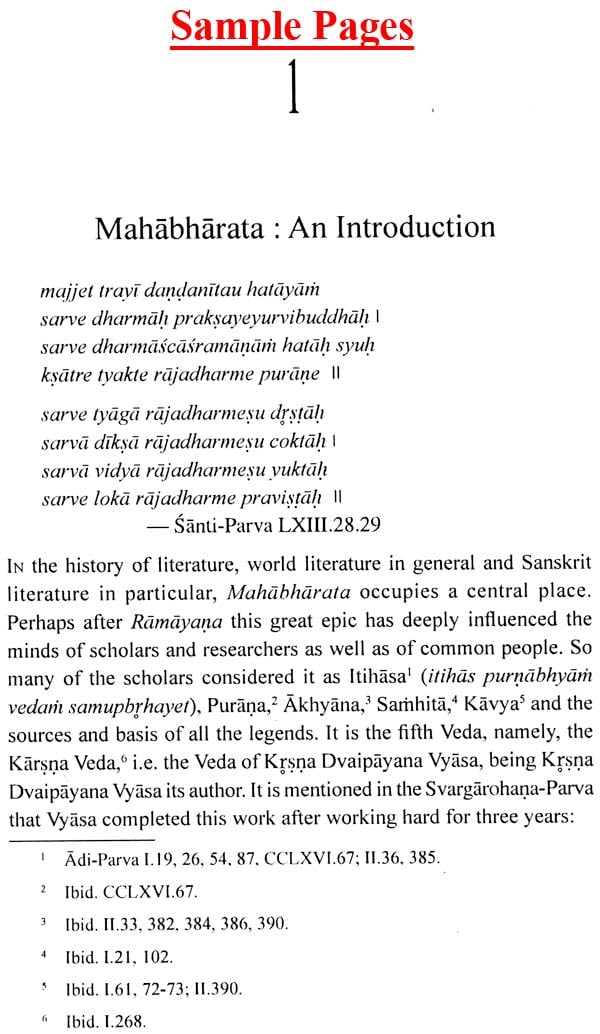 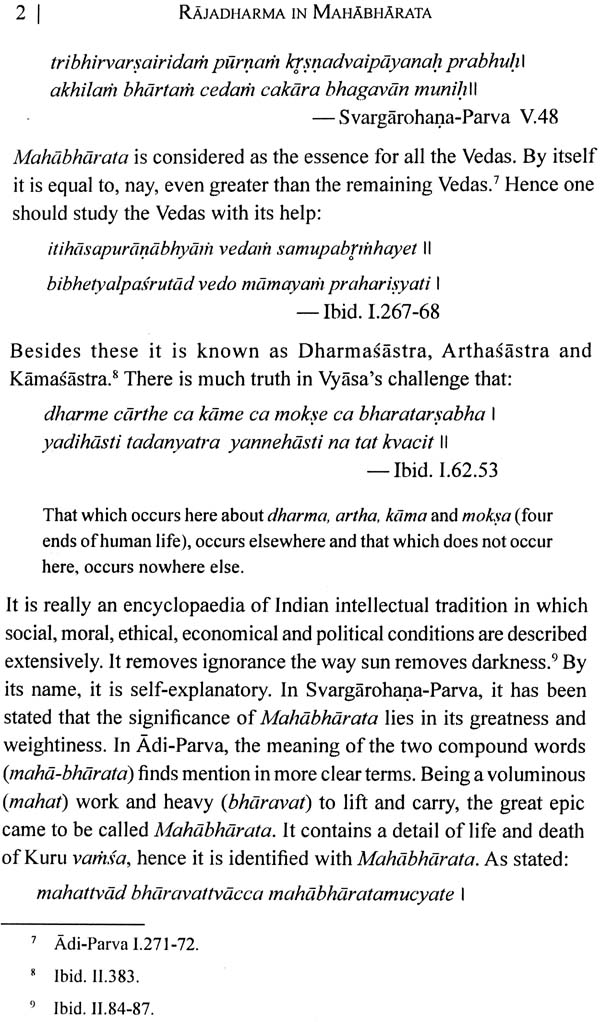 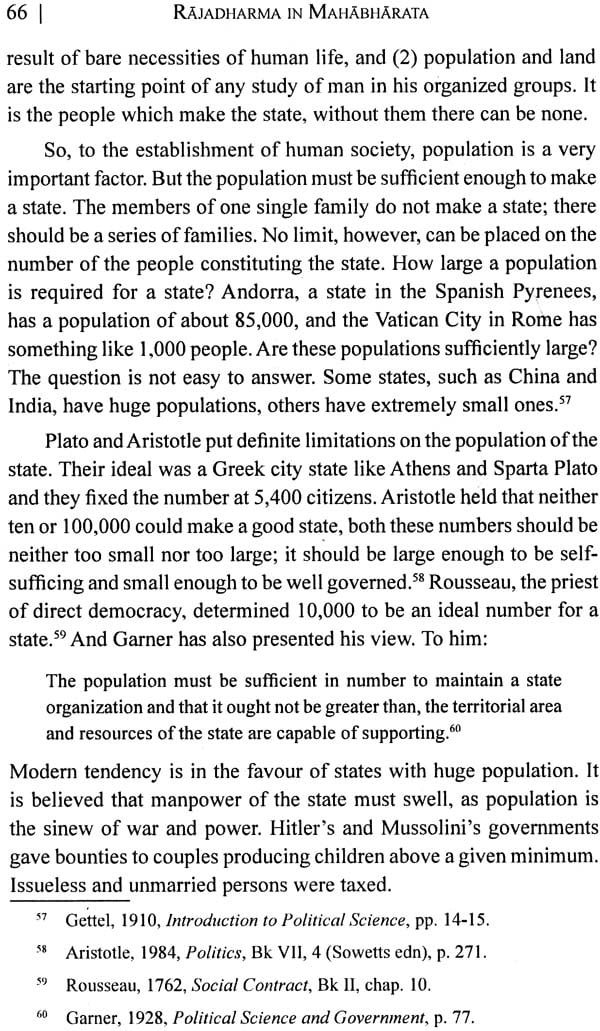 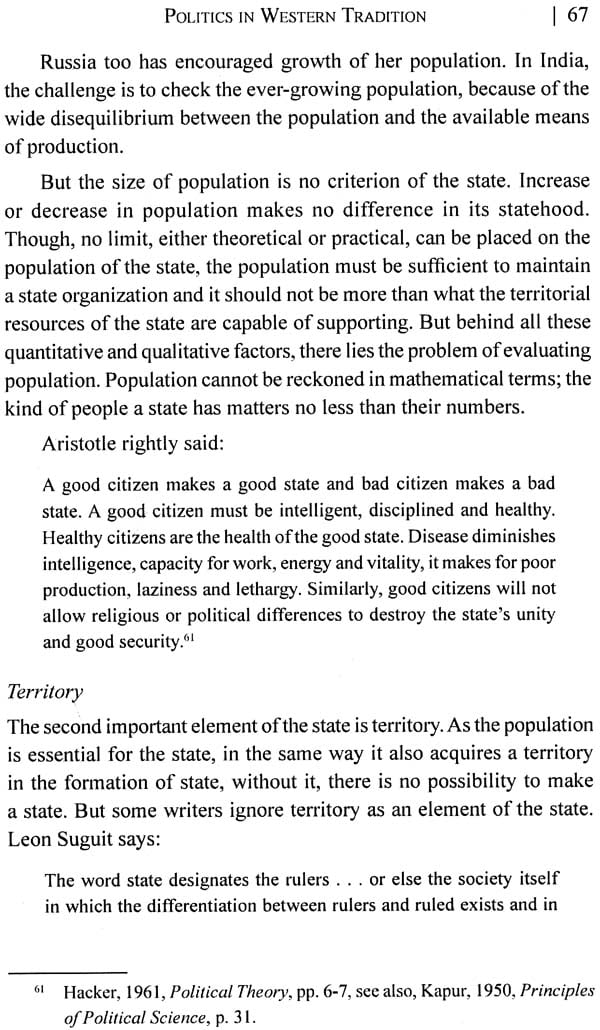 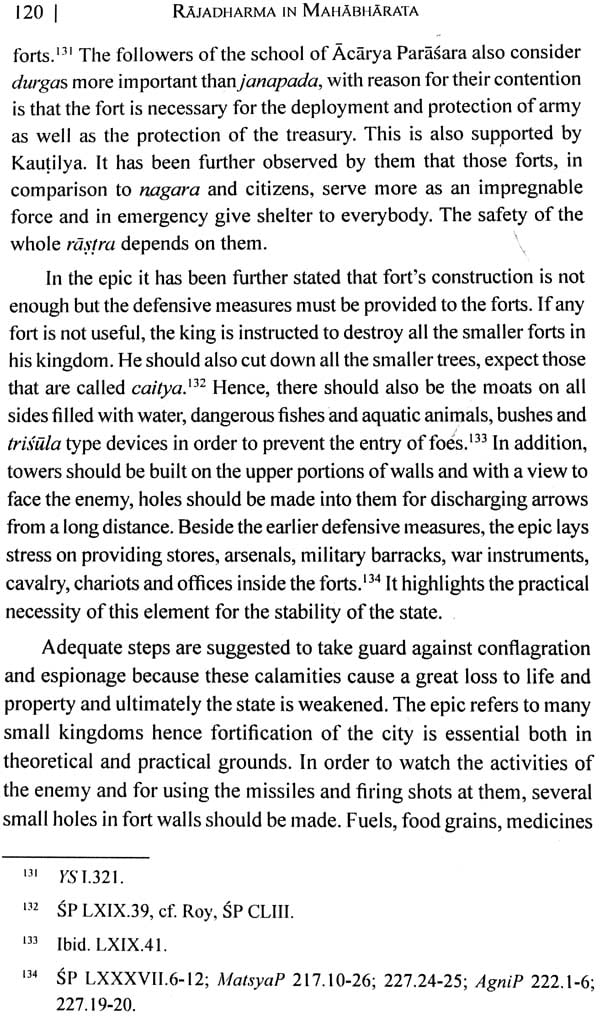 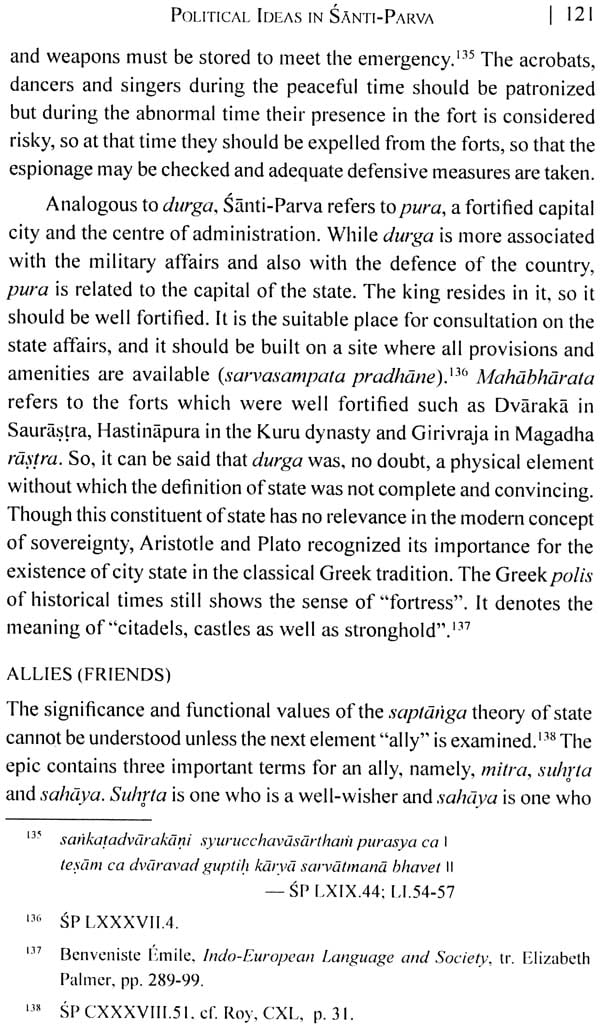 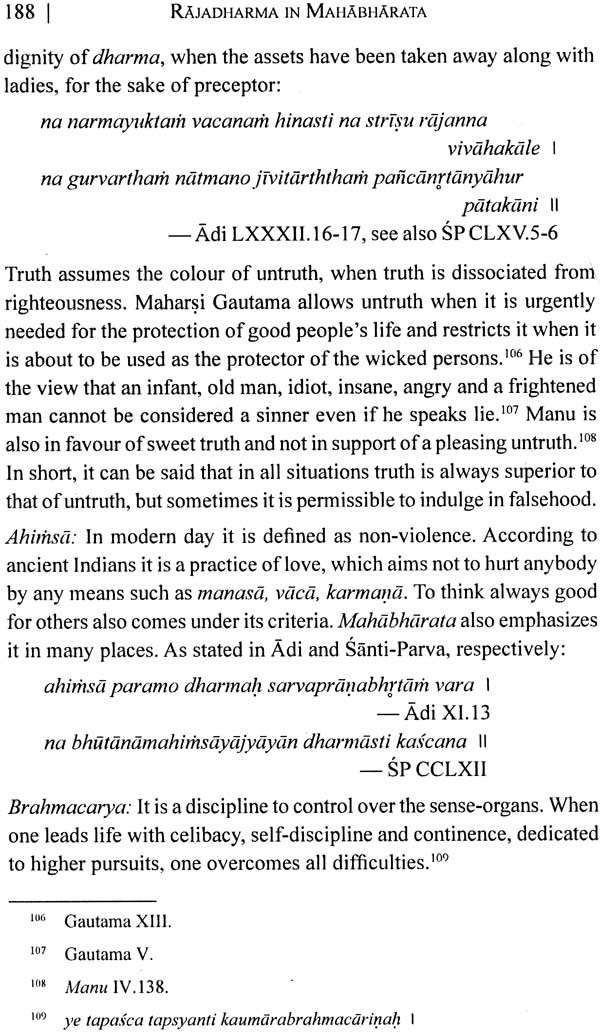 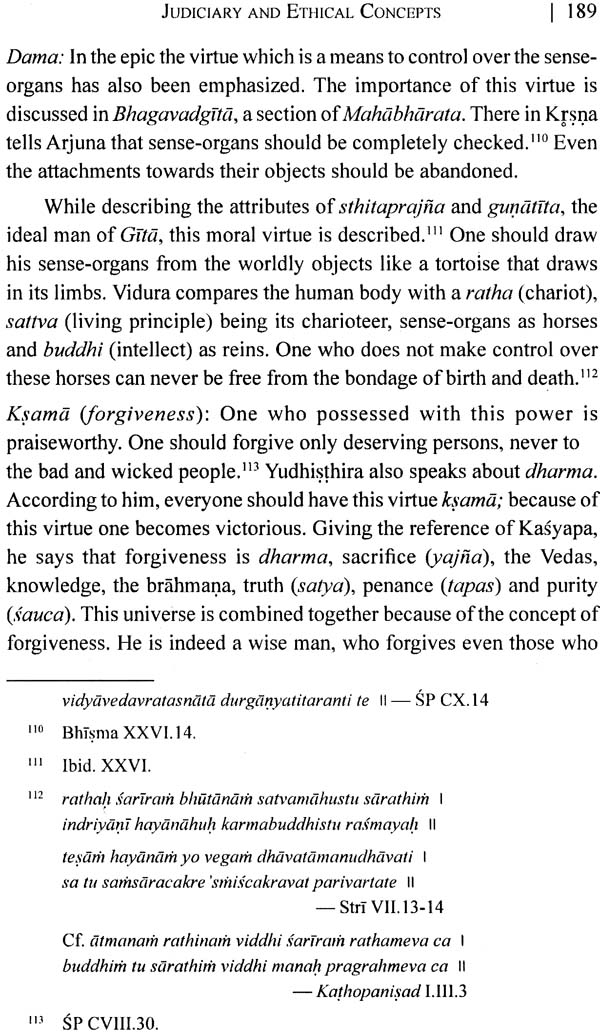 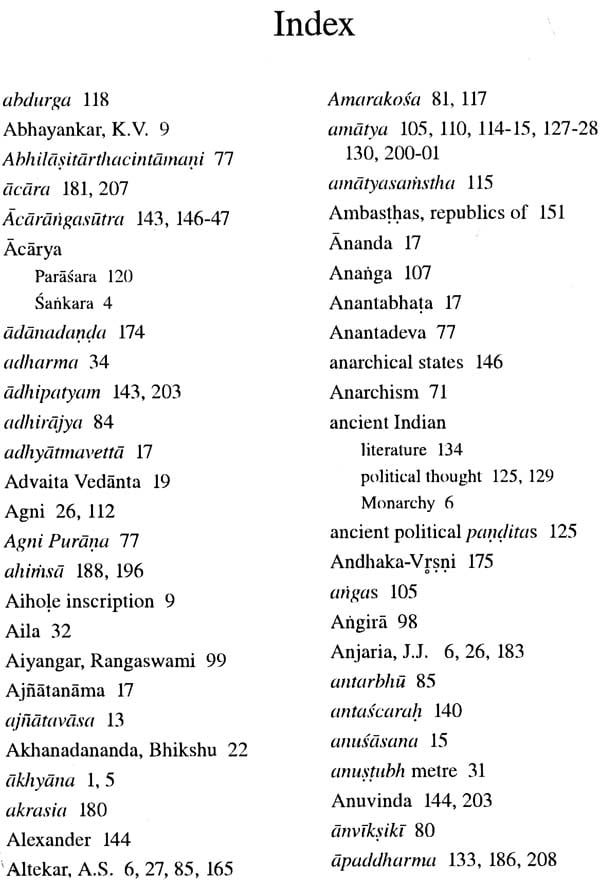 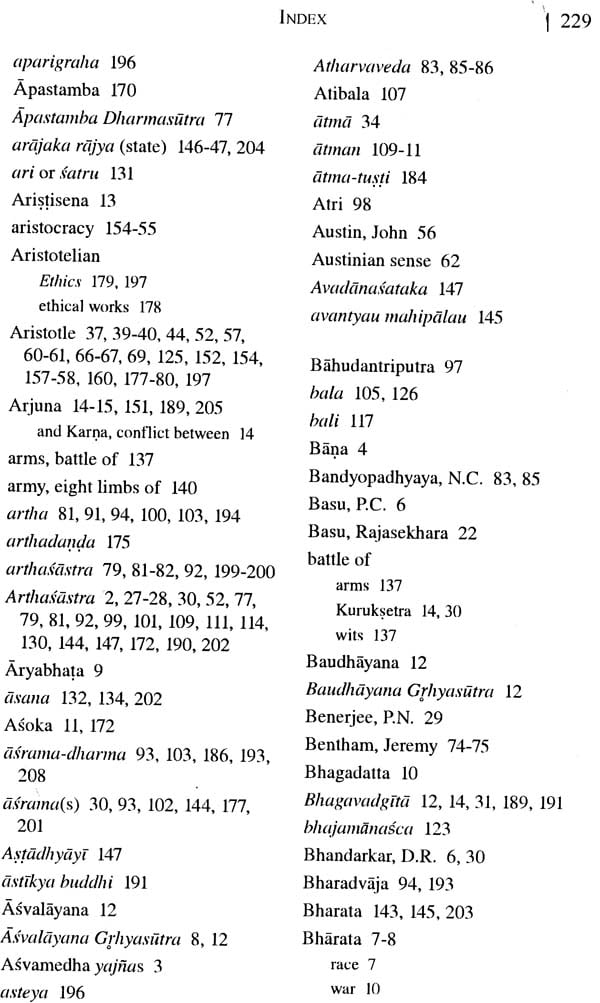 Adipurana: Sanskrit Text with English Translation and Notes (Set of 2 Volumes)
By Shantilal Nagar
$125
Out of Stock