Ramachar and His Lineage (An Old and Rare Book)

They were cultured men spreading their aroma of wisdom and beauty of behaviour around-nay-spreading sweetness light and delight.

I assure my reader that they will glean something valuable and memorable from this breath taking saga of learning and education of Ramachar and his lineage.

Shri C.N. Hiremath, M.A. LL.B. is now retired as a Reader in English at Shri Sharanabasaveswara Arts College, Gulbarga, Under the deep and abiding influence of his father, he was drawn towards religion and philosophy from his early age Already Seven books by him have been published. They are:-

This book gives us a short history of an illustrious family covering nearly five generations upto this day. The present head of the family, Shri Shrinivasacharva Kollur now 70 retired as Superinten- dent in the Department of Industries and Commerce. Government of Karnataka. During his service, while he was in Bangalore for more than a decade. he has been mentioning to me about the huge heep of manuscripts in Bengali written by his great-great-grand-fathar Kollur Ramachar-I. We must appreciate the pains-taking efforts of Shri. Shrinivasacharya in carefully preserving them intact till today. He has made every endeavour to keep them in order and, to some extent. has arranged them subjectwise. To enable himself to check the loose leaves of the manuscripts he tried to learn Bengali even at this late age. The manuscripts run into thousands of pages in the big palm leaf size which are written in a flawless classical manner. Even after more than two hundred years, they appear to be quite fresh and give the impression that the ink is not yet dry. The drawings and the designs made by the author himself on the outer pages of the books present an exquisite piece of art. These manuscripts really lend an enchantment to the view. Perhaps studying them may prove a grand feast to the learned and the laureates.

I too coming from the family of Jagirdars of Samsthan Gurugunta in Raichur district and being a distant relative of this family, shared the idea of Shri Shrinivasacharya that this great treasure should see the light of the day and attract research scholars to decipher them in a perfect manner.

By far, It Is now made-out that the bulk of the manuscripts pertained to Nyaya Shastra. Nyaya Shastra as we know. forms one of the basic auxiliary sciences required for propounding any Vedantic or Philosophical theory, be it Westren or Estern.

Ramachar-1, it seems lived between 1718 and 1808. He went to Nadia (Navadweepa) in Bengal (Now West Bengal) to learn Nyaya Shastra and achieve excellence in it. He left his home at an early age of fourteen or fifteen leaving behind, his young wife of eight or ten and a lonely lamenting mother. He embarkened on a journey of thousands of miles in the days when the formidable Vindhyas and Chembal valies lying in between were infested with thugs and marauders.

Unmindful of the risks of climate. unfavourable food habits and hazards of the journey. Ramachar-I succeeded in reaching Nadia with the sole and indefatigable desire of achieving mastery in Nvava- shastra. He was all set for this great aim of his life and nothing could deter him. His thirst for knowledge and his sojourn in quest of it at such a tender age, that too being an only son of the family is amazing, looking in the background of the present day luxury oriented system of learning with a wide laxity in school discipline.

Here we have to pause and ponder, what made this young boy leave everything dear and fascinating in life and to choose for himself a life of a recluse. The reason is not so simple and it is not without a background.

Several centuries ago Chalukya Pulikesi-II halted Harshaward- hana on the bancks of Narmada and gave him a formidable fight. Harsha had to pull back utterly dismayed. Again, the Pallawas and the Rashtrakutas from the south had once extended their political and territorial sway far in the norh.

It is well known that all the Avataras of the Lord took place in the North. but all the three great Acharyas i.e. Shankara, Ramanuja and Madhwa were from the South. Their distinct interpretation put on the Vaidic literature formed three distinct schools of thought and these three philosophical schools have not only influenced the whole thinking minds in India. but they are even to-day excercising consi- derable operative force on the world thought processes. The Renaiss- ance of Shakti movement of the south from thirteenth century onwards had its own role to play in bringing the whole of India under one cultural impact. The Vachanakaras and the Haridasas in the south and Surdas, Kabirdas and Tulsidas in the North were the Chief torch- bearers of the Bhakti movement. Thus, the great and heavenly Himalayas, the sacred waters of the holy Ganga and the cultural and philosophical movements contributed to the National Unity and integ- rity of India inspite of political descensions and linguistic barriers. These varieties perhaps brought charm to our way of life since variety is the law of attraction.

We, therefore, have to appreciate our Ramachar-I in his aim of becoming an unrivalled and acclaimed world champion in Nyaya Shastra-in this background.

Ramachar-I having born in a traditional family 0 Madhwa School. had by the time, sufficient early schooling at home in Sanskrit and Vedic scriptural texts which he learnt them by rote. He had heard that Nadia of Bengal was known for its Scholarship in Nyayashastra.

Added to it, there was a tremendous upsurge of the Bhakti cult in the North, under the Chaitanya Movement of Namasankirthana. just a few decades ago. Chaitanya took his spiritual initiation under. Iswarpuri a Vaishnava Sanyasi and desciple of Madhavendrapuri who earlier had come under the spell of Shri Vyasaraja Swamy of Dwaita School of Philosophy. Vyasaraja himself was a past master in Terka and Nyaya and had unsurpassed works as "Tarka Tendava and Nvavamritha" to his credit. By that time Shri Vyasaraja had almost brought a great victory to the Madhwa school of thought in the South. Lord Chaitanya and his Goswamies too had almost defeated all the Mayavadi scholars of the North right from Kashmir to Bengal and established supremacy of Krishna Bhakti. Shri Chaitanya took Sanyasa at a very early age, after a' short married life and by twenty- four he was known as a great Pandit all over the country, He travelled along the West and the East coast of India preaching devotion to Krishna. Including Muslims thousands became his desciples. Two of his chosen descipies, Sanatana Goswamy and Roopa Gosway, who were known earlier as Dabir Khas and Saker Mullik (Ministers under a Mustim Nawab) re-entered the Hindu-fold with the help of Shri Chaitanya and (took initiation in Vaidic Dharma. Some of the desciples of Shri Chaitanya were Muslims from the far South in Karnataka, who, it seems, were converts to Islam.

Nadia with its reputation for Nyayashastra coupled with this great devotional movement must have had solitary effect on the young mind of Ramachar-1. Perhaps this was the reason why he selected Nadia for his study, leaving other welf-known pieces like Varanasi,Gokarna, Kumbhakonam etc. Ramacharya was very keen to learn all the seventy two Vadas (Methods of arguments) which was a rarity. Such a perfect system of Nyaya Shastra study was the speciality of Nadia at that time.

Ramacharva-l having accomplished his task after a relentless study of Nyayashastra for over thirty one long years returned to the pavilian and reduced to writing all that he had imbibed in Nadia.

We are fortunate that these valuable Manuscripts have not been allowed to cross the shores of India, even under a heavy allurement by some West German scholars.

Now, Ramachar-11 was also a great and unrivalled scholar in Nvava Shastra, He was known for his unparalled mastery over astro- logy and medicine. Shri Venkatacharv, father of the present head of the family, in his own right was literally a master of all and jack of none, That was his name and fame. He had mastered music, painting, Smithy, carpentry etc.

These gaint scholars received royal patronage under the benava- lent kings of Surpur Samsthan, who were the ardent lovers of what is best in life. Guddipidda Nayaka was known for his charity in his dynasty.

. Present head of the family Shri Shrinivasacharya is again a versa- tile genius, In addition to his literary accomplishments in persian, Urdu. Sanskrit and Kannada, he has proved himself a great champion of Hindustani Instrumental music. He too is a lover of art and himself is an expert in handycrafts etc. On all counts, genius seems to run in the family in an unbroken line upto this day.

Thus, I feel singularly fortunate in adding a few words by way of a humble foreword to this book "Ramachar and his lineage".

Before I close, I must say something about my sincere and esteemed friend Shri C. N. Hiremath who has spent his valuable time and sleepless nights in prepering this small but self-contained infor- mative book about a great and nobal family. His undoubtedly scholarly yet lucid style keeps the readers spell bound and at times it holds him in complete trance. His narrative exubrance streams out like the gorgeous Ganga coming down from the lofty heights of the heavenly Himalayas. In his own words, this brief history of the family is really a romantic saga of a great adventure in quest of true and perfect knowledge. The author in presenting this book admits unawares that he was possessed when he set his hand on it. He is perfectly justified in feeling so. I feel, Shri C. N. Hiremath must have some link with the Acharyas of this family at some remote point of time, who knows! Life is known for its surprises and this is one among them!

To a great Extent it is true that we Indians lack the sense of history. Out of the available scanty information, not sufficient from historical point of view, Shri Hiremath has woven such a superfine. texture of narration which makas history appear as a beautiful story.

I hope, this book will serve as a fore-runner of the massive literature left behind by the scholars of this family, yet to be published after careful study and research. 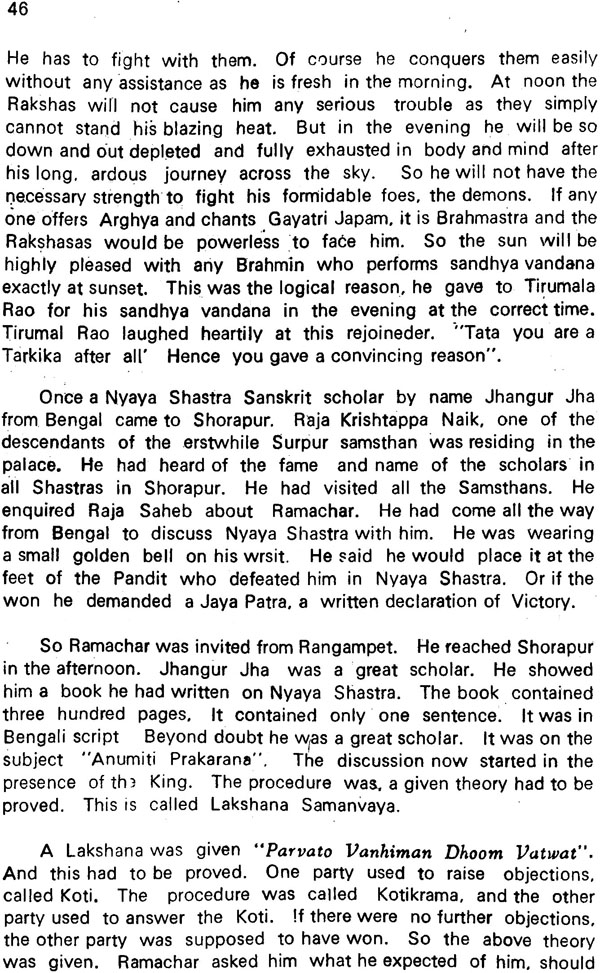 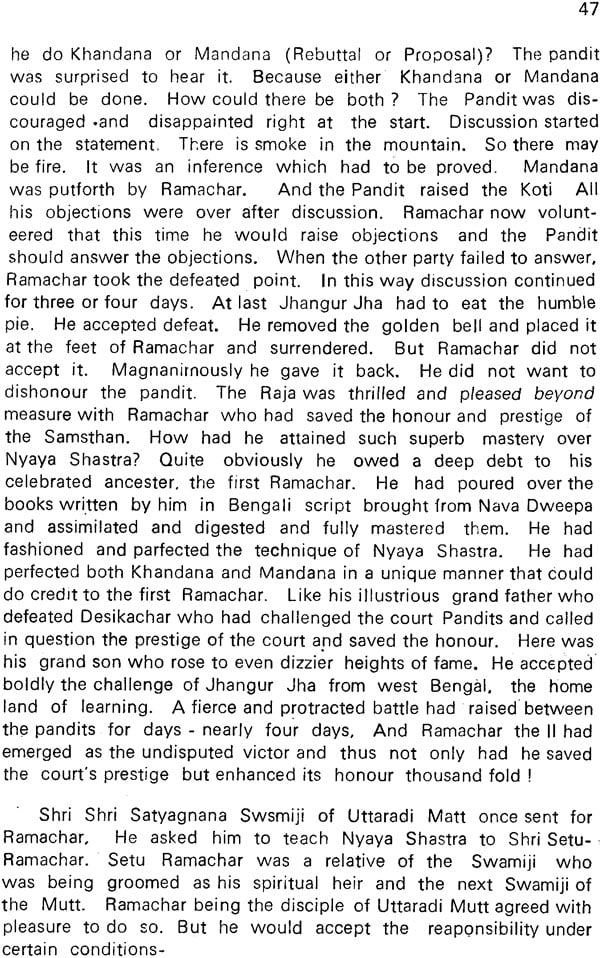 The Glory That is Tirumala (All that is to be known about Tirumala, the Bhooloka Paramapada)
By Dr. K.K. Moorthy
$16 History of Tirupati: The Thiruvengadam Temples (Set of 3 Volumes) - An Old and Rare Book
By T. K. T. Viraraghava Charya
$69
Out of Stock History of Tirupati As Glaned From Kaifiyyats
By P. Rajani Kumari
$16 Tirupati (A Guide to Life)
By Kota Neelima
$21
FREE Delivery