This guidebook is a part of the World Heritage Series published by the Archaeological Survey of India with the aim of introducing the visitor to UNESCO World Heritage Monuments in India.

Extensive historical research and a focus on architectural details make this book an invaluable companion for anyone wishing to explore o the Mughal emperor Shad Shah Jahan’s palace in Delhi.

Red Fort or Lal-Qila represents the pinnacle of Mughal place-fort architecture, a process initiated by Babur, the first Mughal emperor, and brought to a stunning refinement by Shah Jahan with a splendid fusion of traditions; Islamic, Persian, Timurid and Hindu.

The guide also includes brief sections on Shahjahanabad, the grand Jami-Masjid, the adjoining Salimgarh Fort and the museums within the two forts.

Shah Jahan transferred his capital from Agra to Delhi in 1638 and laid the foundation of Shahjahanabad, the seventh city of Delhi, on the banks of the Yamuna. It was completed in 1649. Prior to this, the Mughal capital was at Agra, 203 km south-east of Delhi.

The seventeenth century European traveller Francois Bernier writes in his Travels in the Mogul Empire, AD 1656-68, that the scorching heat of the city forced Shah Jahan to shift his capital to Delhi. There was also a strategic reason for the shift from Agra since Delhi, due to its geographic location, was more suitable for the control of the whole empire.

The city of Shahjahanabad, polygonal in plan, was provided with houses in blocks, wide roads, mosques and bazaars, among which Chandni- Chowk, with a tree-shaded water channel flowing in its centre, was one of the most enchanting markets in the contemporary East.

Laid out by the emperor's daughter, Jahanara, Chandni-Chowk was the main thoroughfare of the city, running west from the Lahori Gate of Red Fort to Fatehpuri-Masjid. It was planned as a series of gardens and chawks. The other main bazaar of the city, Faiz Bazaar was planned to be perpendicular to Chandni-Chowk and was approached from the Delhi Gate of the Red Fort.

With the Red Fort at its northeastern base, the city was engirdled by rubble-built high walls, strengthened by bastions, circular as well as square, and pierced by several gates. Large portions of the city-walls suffered damage later during 1857 and were rebuilt. Over some of its parts the wall has disappeared only in recent years, but substantial stretches of it still survive.

These gates, square on plan, are pierced by high arched openings, except the Nigambodh Gate, which is low, and the Kashmiri Gate, which has lateral double openings, one for the entrance and the other for exit. Delhi Gate, at the intersection of Asaf Ali Road and Netaji Subhash Marg. is entered through a pointed arch opening, flanked on either end with bastions. Its name comes from the old cities it faced to the south, which were clubbed together as 'Delhi'.

After the transfer of the capital, Shah Jahan, on 16 April 1639, laid the foundation of his citadel, Lal-Qila (Lal-Qal'a) or Red Fort, known also by other names in contemporary accounts.

Gordon Sanderson and Maulvi Shuaib in their book, Delhi Fort: A Guide to the Buildings and Gardens, write, 'In the reigns of Shah Jahan and Aurangzeb it was styled Qala-i-Mubarak (the Fortunate Citadel) or Qala-i-Shahjahanabad, and it is under this latter title that we find references to it in the historical works of the period. In the reign of Bahadur Shah II, it was known as Qala-i-Mu'alla (the Exalted Fort)'.

The fort was completed after nine years on 16 April 1648. The entire fort is said to have cost about one crore of rupees, half of which was spent on the palaces.

On the north, the fort is connected by a bridge with Salimgarh. Outside the ramparts runs a moat, originally connected with the river.

Most of the buildings in the fort were once occupied by the British army and bear scars inflicted by them. In 2004, the Indian Army which had occupied the fort after 1947, finally vacated the fort which is now fully under the protection of the Archaeological Survey of India (ASI).

Two years after the fort was built, in 1650, Shah Jahan commenced the construction of Jami-Masjid, the largest mosque in India. Lying about 500 m west of the Red Fort, it was completed after six years at a cost of about ten lakhs of rupees. It was here that the emperor went for his Friday prayers, going through the Delhi Gate of his citadel (see p. 90).

Another important mosque in Shahjahanabad is Fatehpuri-Masjid, at the western end of Chandni-Chowk. Built in 1650 by Fatehpuri- Begam, one of the wives of Shah Jahan, this red sandstone mosque has single and double-storeyed apartments on the sides. It is surmounted by a single dome and flanked by tall minarets. The mosque was aligned with the seat of the emperor in Diwan-i-Am in Red Fort. Until the barbican to the Lahori Gate of Red Fort was added by Aurangzeb, the mosque could be seen from the Diwan-i-Am itself, about 2 km away.

Red Fort is one of the most magnificent fort- palaces in India. Declared as a UNESCO World Heritage Site in 2007, it served as the citadel of Shahjahanabad — the capital of the Mughal emperor, Shah Jahan. It derives its name from the massive red sandstone walls.

The Red Fort stands testimony to Mughal architectural excellence, which reached its zenith under Shah Jahan. Although based on Islamic guidelines, the plan reveals a fusion of Persian, Timurid and Hindu traditions. The Red Fort’s innovative planning and architectural style strongly influenced later structures in Rajasthan, Agra and other places.

The fort has undergone numerous alterations after its original construction, especially under Aurangzeb and later Mughal rulers. It underwent a sea of change during the Uprising of 1857, and the subsequent British occupation. After Independence, the Indian Army continued to be stationed in the complex till 2004. Thereafter, the entire fort has come under the supervision and conservation efforts of the Archaeological Survey of India.

Today, the Mughal and British structures stand together in perfect symphony — a culmination of two distinct phases of Indian history. 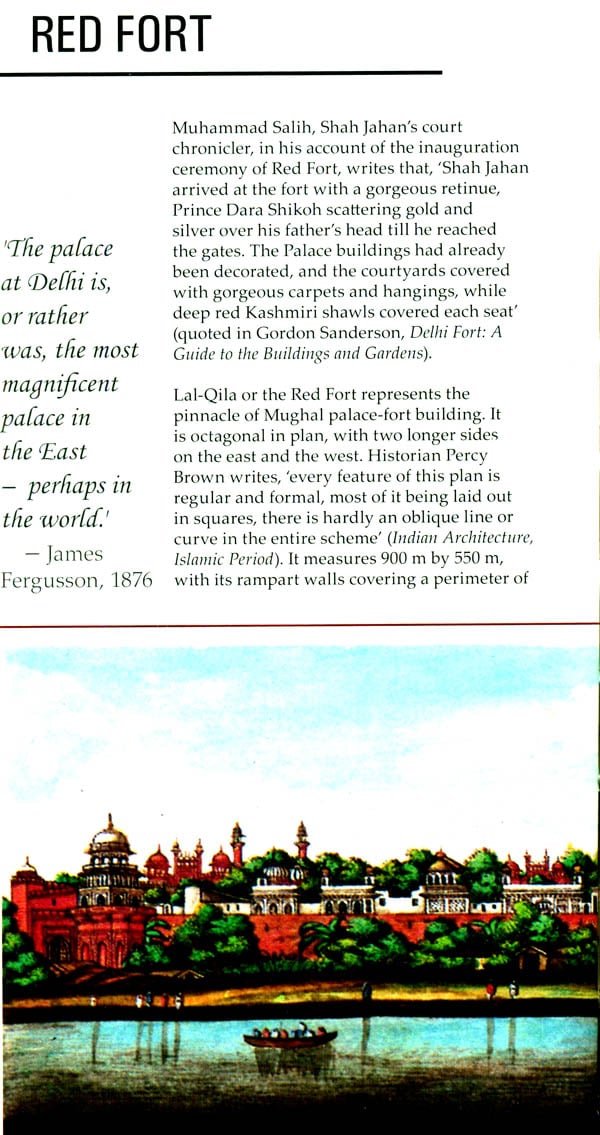 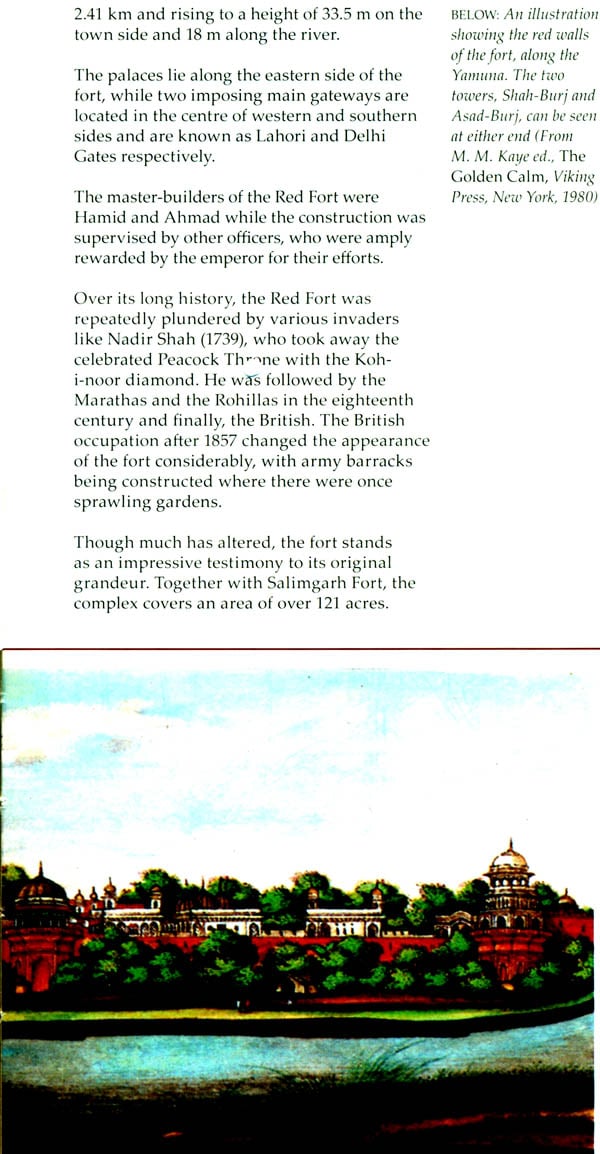 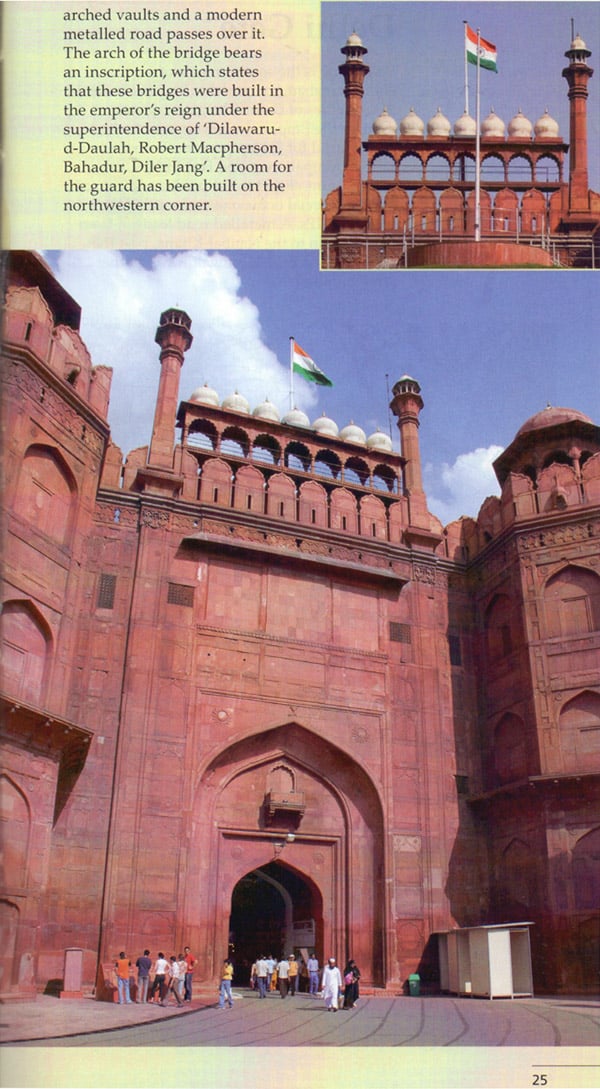 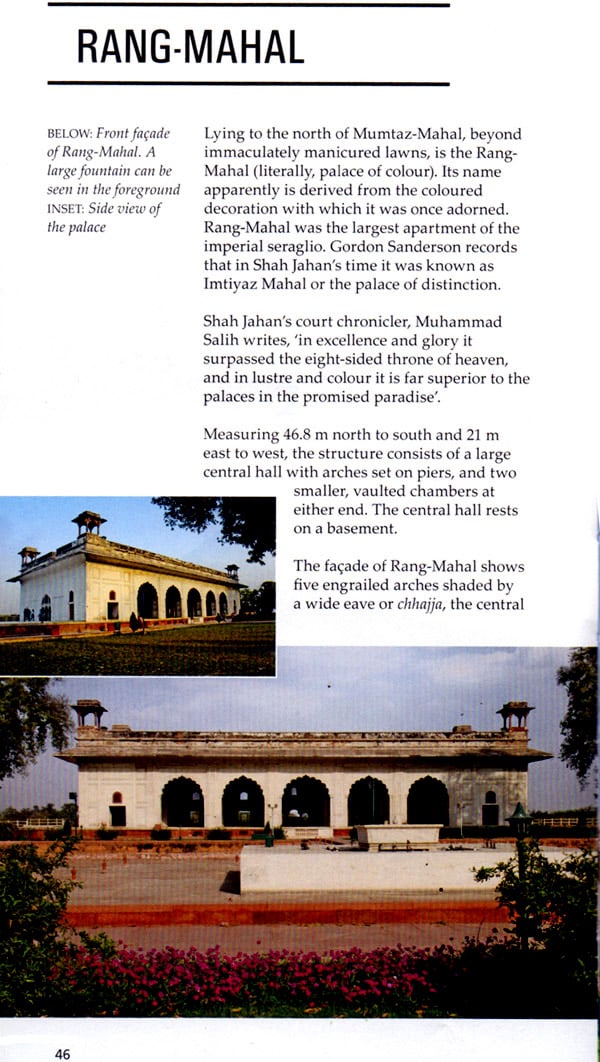 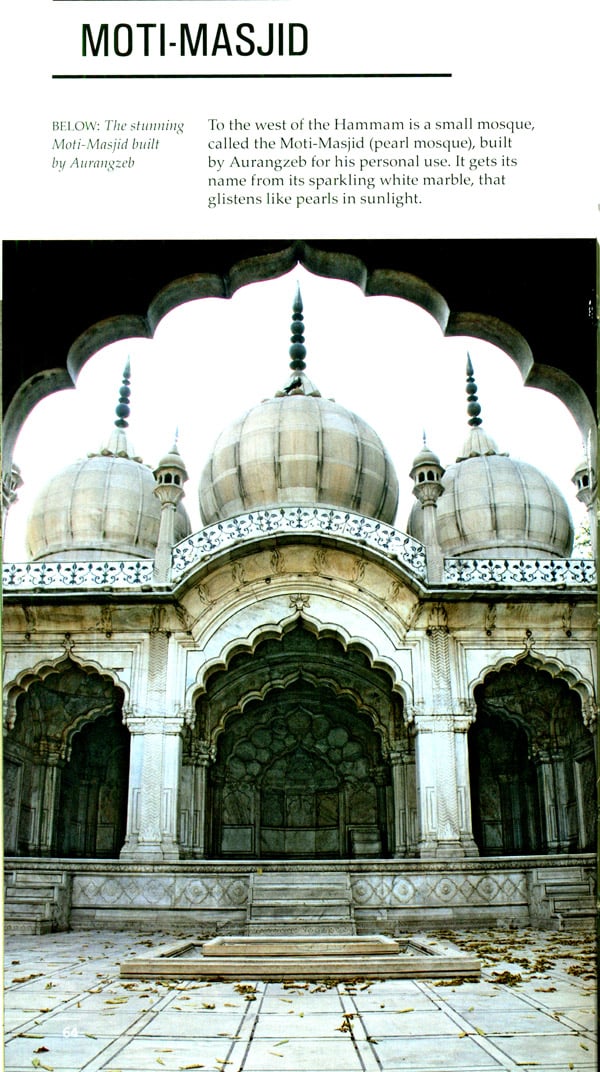 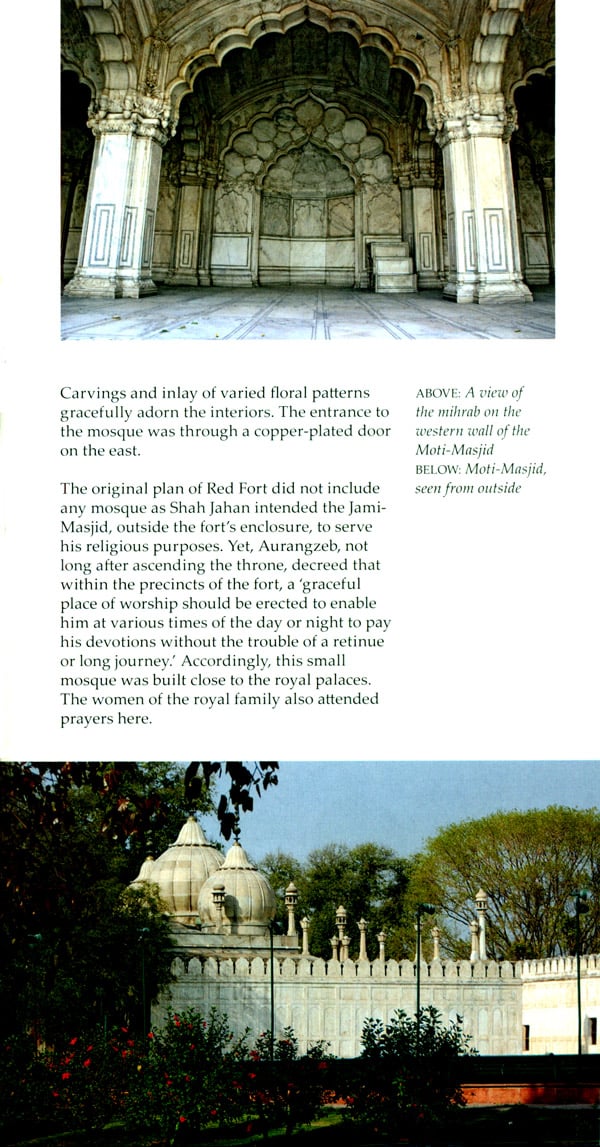 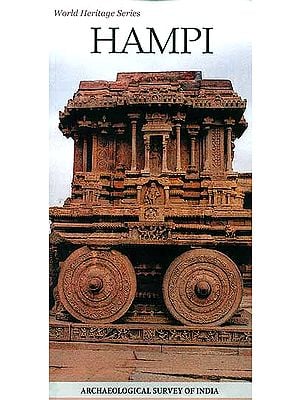 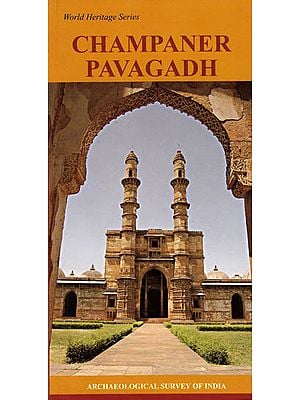 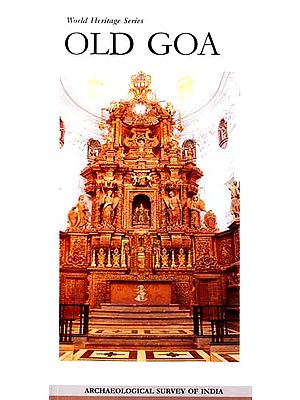 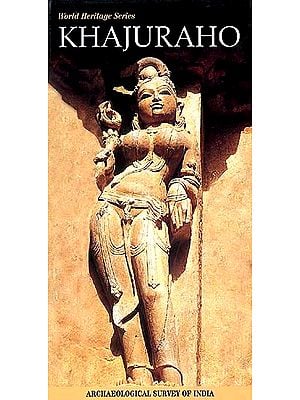 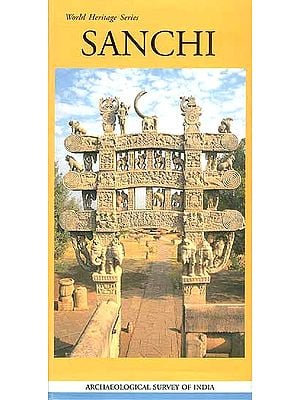 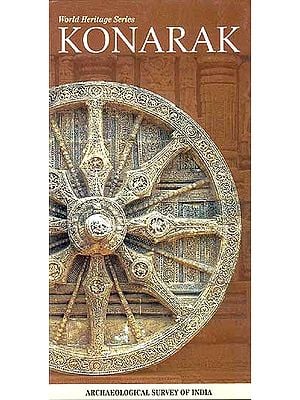 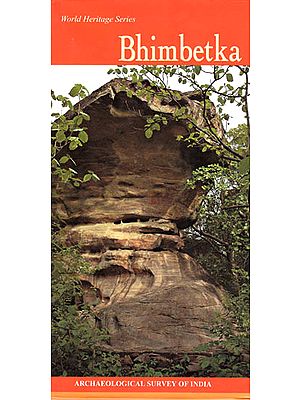 Bhimbetka: World Heritage Series
By S.B. Ota
$25
Out of Stock