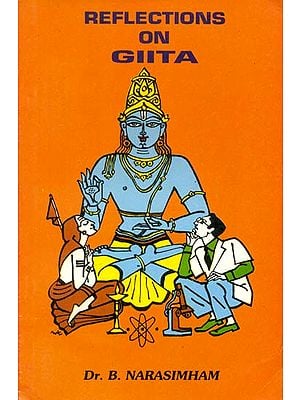 There are a number of books, written by the wisest of the world, telling us what to do and what not to do. But right and wrong cannot be absolutely determined for all men, for all times, and for all situations. Ultimately the individual has to determine every time, which one to choose of the alternatives before him. He needs the satisfaction that lie had done right. No one wants to carry the burden of a smouldering doubt that, probably, he had chosen the wrong course.

To have firm faith of being in the right, one should know the basis for deciding right and wrong. Bhagavad Gita seeks to set out this Basis before us. The great book does not dictate. It just explains and leaves the decision to us.

Gita, however, is in a language many centuries old. Great thinkers have placed different interpretations on the text, In the fast changing world of today, when science, logic and reason dominate our thinking, there is need to take another look at the book and confirm that it is still relevant.

This book focusses the new light on the eternal truths of Gita for the modern, educated reader, revealing the roots of our value system.

The essence of all the scriptures of the world is for the manifestation of the potential divinity in man for achieving the ultimate happiness. Whatever may be our occupation or pursuit in life, this manifestation of divinity is to be attained in this very life. That is the goal supreme. Bhagavad Gita as a part and parcel of the great epic Mahabharata has brought out this aspect by delivering the message right in the midst of intense action, that is, a battle field where troops are poised for action.

Bhagavad Gita conveys the essence of the Upanishadic teachings in a lucid manner through the dialogue between Sarathi Sri Krishna and the disciple Arjuna in a short span of about 700 slokas. Down the ages it has been treated and interpreted probably by the largest number of thinkers and commentators for any classical text, both ancient or modern. And each interpreter has found basis for his own understanding or philosophical interpretation in this great poem.

The present book ‘Reflections on the Giita’ by Dr.B. Narasimham is a sort of a guide for understanding of the great scripture for more practical utilisation of the teachings which is inherent in it. Thus it is not a commentary aiming to postulate a theory or in support of a philosophy. The present book has been divided broadly into three sections, first the basic concepts in the Gita, next the virtues enunciated and understanding of their necessity and lastly the paths that lead to the Supreme Being.

Dr. Narasimham being basically an Agricultural Scientist has exhibited that his brilliancy is not limited to that particular field of study only. His satirical writings give indication of his wit and wisdom in understanding of the Society and its ways. The ‘reflections’ bring out his deep philosophical insight. At the same time his scientific grounding has brought forth some interesting examples and interpretations from modern science. The detailed discussions on the Virtues listed in the ‘Reflections’ helps the reader to acquire an insight into the practical application of these virtues in his work-a-day life.

Thus ‘Reflections on the Gita’ is a valuable addition to the fund of literature on this important subject from a new angle.

Bhagavad Gita is one of the most popular books of the world. Though the book was written some five thousand years ago, The message is relevant even today. The philosophical terms used in the text have been imbibed into all Indian Languages. Therefore, they sound familiar to us. Yet their meaning is not clear to many. The different schools of philosophy have placed their own interpretations on the text. Above them all, we have modern scientific community which is critical of some propositions set forth in the great book. This is partly due to the fact that the book is set in the back -drop of the truths, beliefs and knowledge of those old bygone days. Some of the facts have scientific parallels but not yet verifiable by science. Science is still a developing knowledge. Men trained in science are hesitant to accept some concepts with the finality with which they are set forth in the ancient book.

Like science, spirituality is a product of the same human brain. Spiritual propositions also have changed from time to time. There are different schools of thought with widely different outlook. All of them are equally respected because the exponents of each of the schools were great learned men who were honest- seekers of truth. Gita is inclined towards the Saankhya school which has the closest resemblance to modern scientific method in its approach. In fact, science can be considered an extension of the Saankhya method of search with reason and logic, devoid of mysticism or dictatorial doctrines.

Science, however, has so far confined its attention to physical phenomena of nature. It has .only recently started paying attention to the mind. Emotions and feelings which consitute the major factors affecting peace and happiness of humanity are not yet the targets of science. As a result, today, there is an unbalanced development of the human mind; sharp intellect, but poor understanding of good and bad. No wonder, today, the world is a haven of crime and cruelty. In fact, by totally neglecting feelings, it would seem that science is promoting them.

Spiritual endeavour is primarily with the distant goal of emancipation of the soul. But it has nearer social benefits of great immediate value. Spiritual knowledge implants a self appointed judge in our very mind which always shows the right path. Following that path in our dealings with the people around us, we raise them to a higher level. Thereby, more harmony cements man and man. The spiritual man is not only happy with himself but also makes those who come in contact with him happy. Science gives us knowledge and physical comfort but not necessarily happiness. Spirituality, on the other hand, can give happiness even to the man in the hut. A happy mind is more valuable to man than a journey to the moon. Our ancestors, therefore, laid more emphasis on spirituality than on material science.

All the great thinkers focussed their attention largely on the eternal truth of this creation and its relationship with the transcient human mind. To the man of the everyday world, who has little time or epuipment to meditate on such deep matters, it seems to be of academic interest. He would like to have easy and ready made prescriptions to resolve the little dilemmas that precede his numerous decisions and actions. In other words, he wants a practical and pragmatic application of spiritual knowledge to guide him in his worldly actions. That will help him to carry on with confidence and faith in the rightness of his actions.

We have plenty of such moral guides in our literature. The verses of Bhartrihari, the abhangs of Tukaram, the songs of Kabir and a host of books in regional languages by great men have all attempted such simple thumb rules of behaviour.

Unfortunately, we cannot determine in absolute terms, what is right and what is not. It depends on the general social acceptance of the time. Naturally, scholars of our time would like to find sanctions in the scriptures for our changed values. This results in new interpretations. More than a millenium ago, S’ankaraacaarya, the celebrated genius, gave a brilliant commentary on Gita against the background of the vast spiritual literature available in his time. Raamaanuja, an equally brilliant sage of the 11th century gave his own commentary based on his slightly different concept of man and God. This was followed by many more commentators in our time like Aurobindo, Tilak, Vinoba, Gandhi and Radhakrishnan, to name only a few. Each commentary has its own colour, flavour and purpose.

Science and social change have made it imperative to view the age old teachings in a new light and Gita is not a dictatorial book. It does not encourage blind obedience to rules. It helps us to reason out for ourselves and take our own decisions.

This little book attempts to present the teachings of Gita in a manner that can be appreciated by the people of the present society - the scientists, businessmen, artisans, in fact, men and women of all walks of life. It helps them lead a life of satisfaction that what they do is in consonance with the great teachings of the past. That would give them a peaceful, purposeful and harmonious life free of tension. 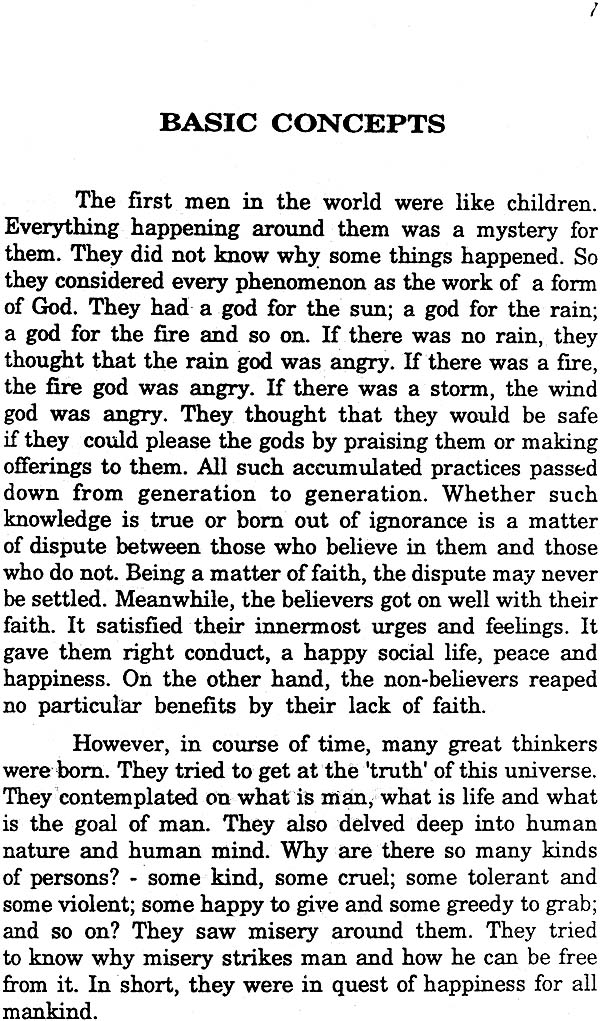 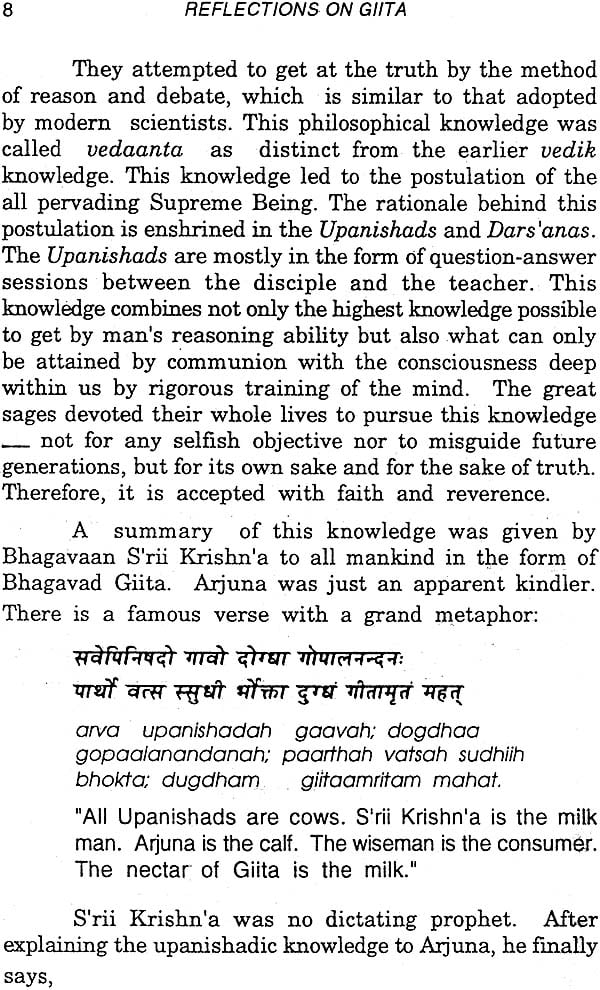 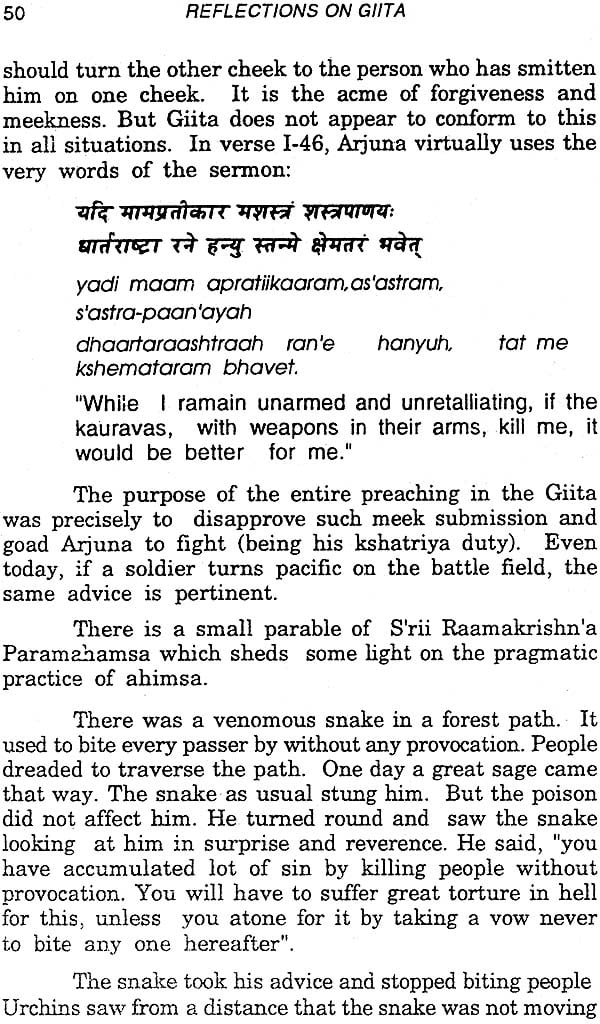 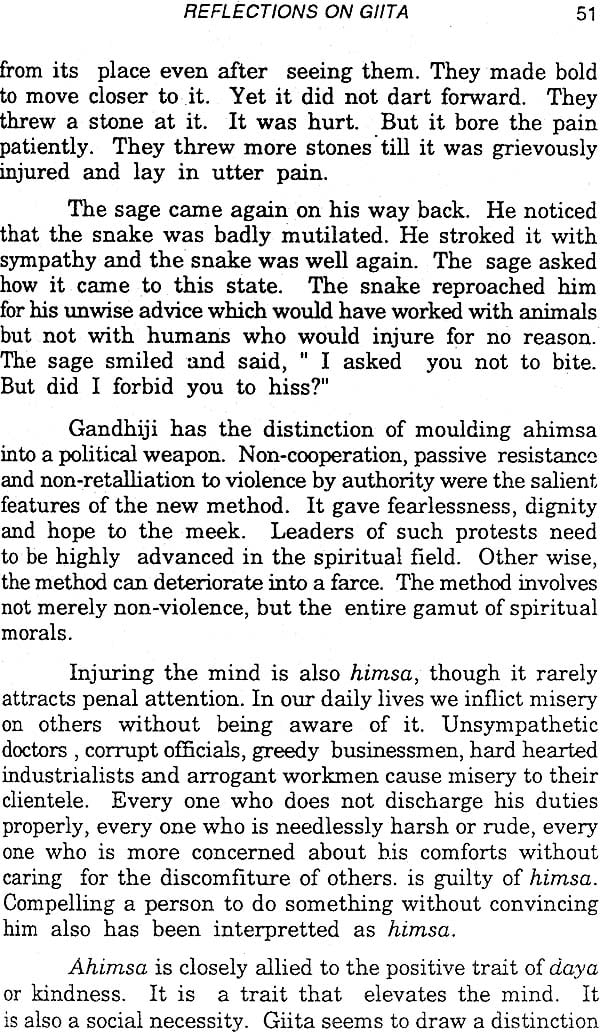 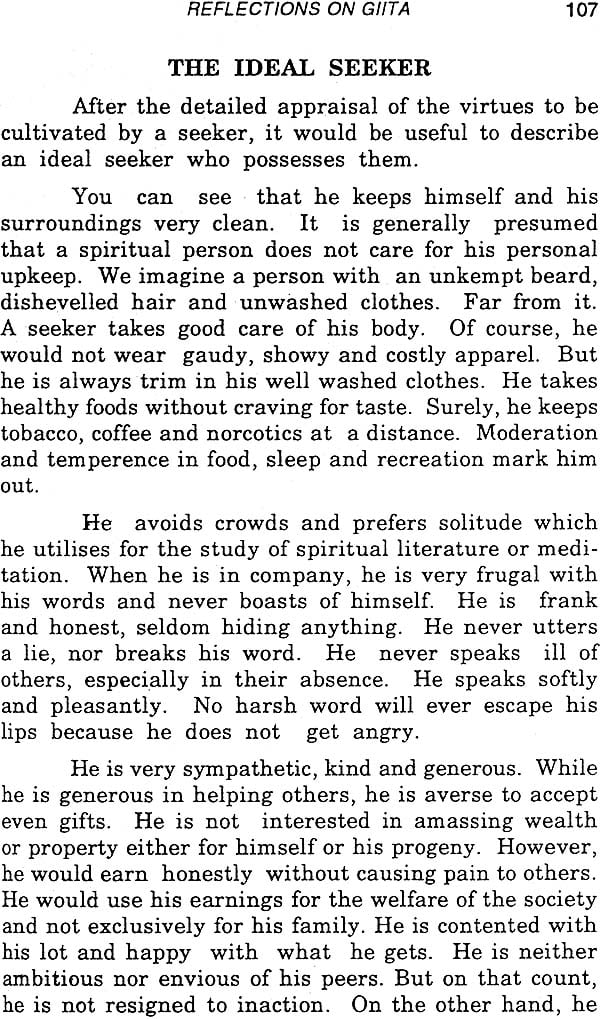 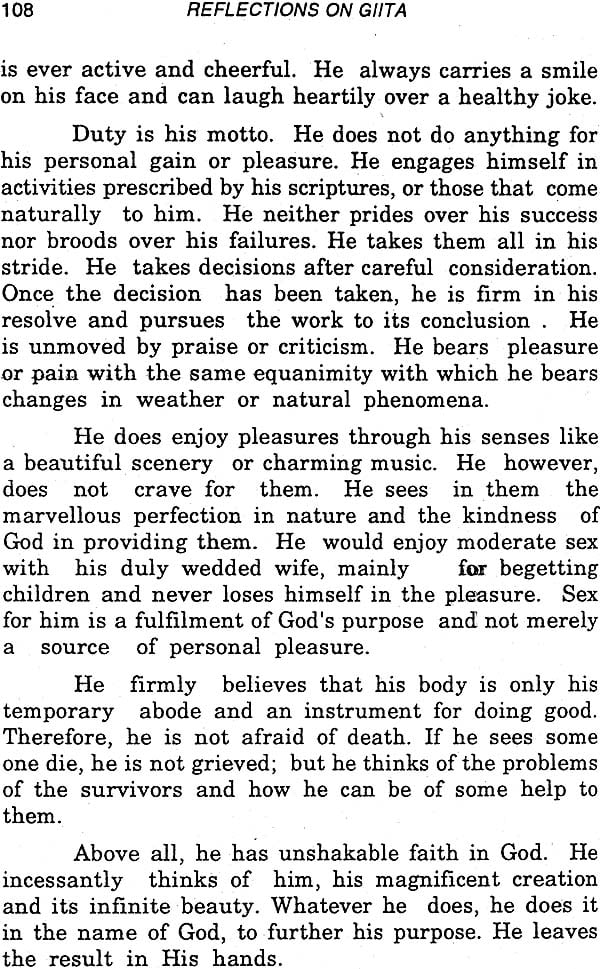 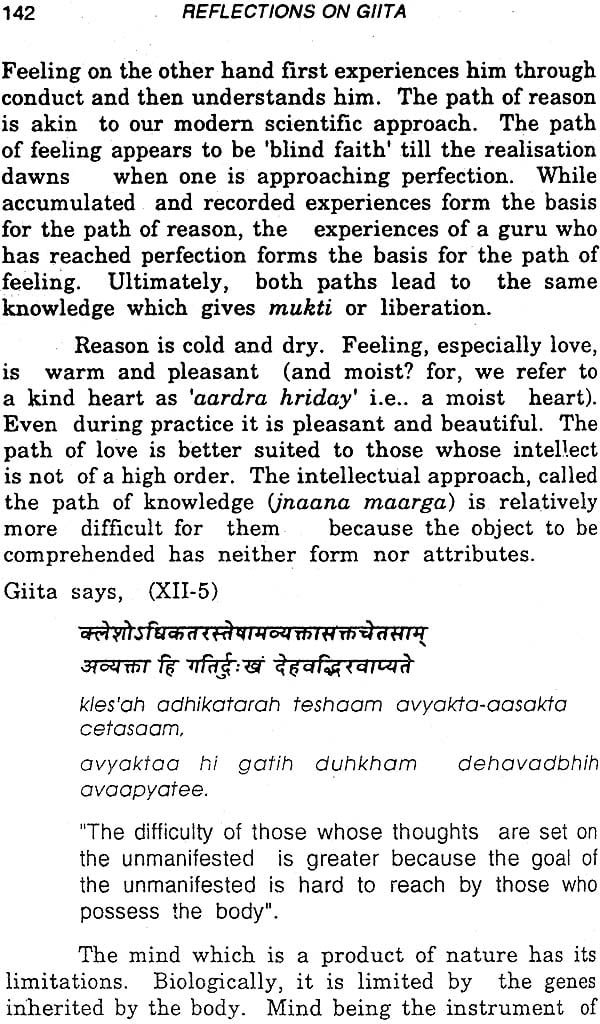 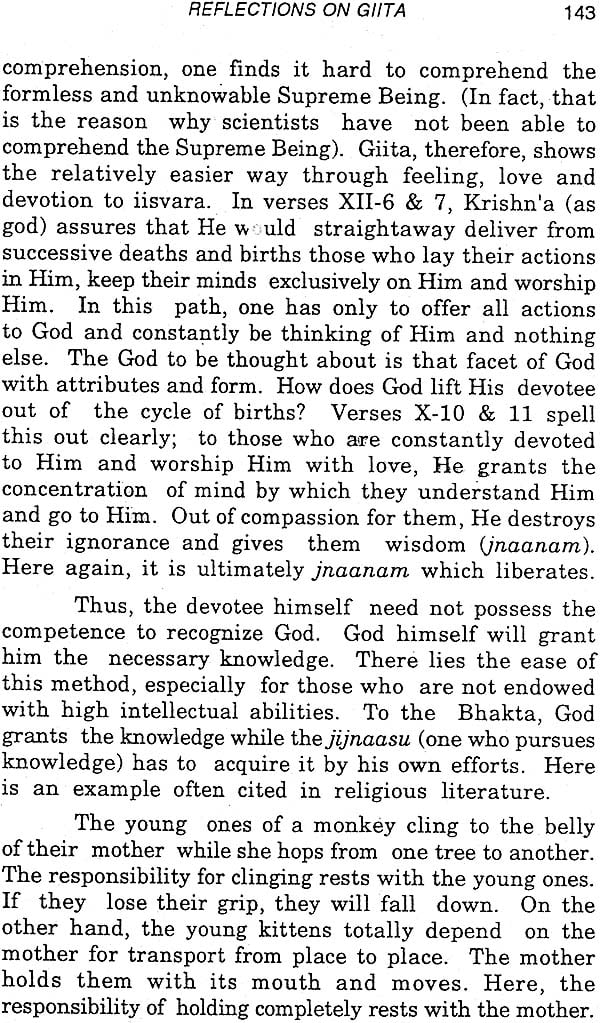 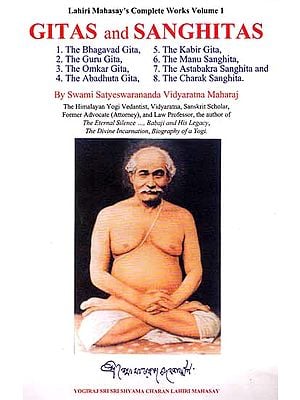 Complete Works of Lahiri Mahasay (Volume 1): Gitas and Sanghitas The Bhagavad Gita, The Guru Gita, The Omkar Gita, The Abadhuta Gita, The Kabir Gita, The Manu Sanghita, The Astabakra Sanghita and The Charak Sanghita
By Swami Satyeswaranada
$52
Out of Stock

Thoughts on The Gita (A Study of Sri Aurobindo's Essays on The Gita)
By M.P. Pandit
$31
FREE Delivery

Gita for Everyday Living: Exploring the Message of the Gita in a Contemporary and Practical Context
Publisher Sri Ramakrishna Math
$15
Best Seller

Gita Sandesh (The Message of the Gita)
By Swami Ramdas
$8 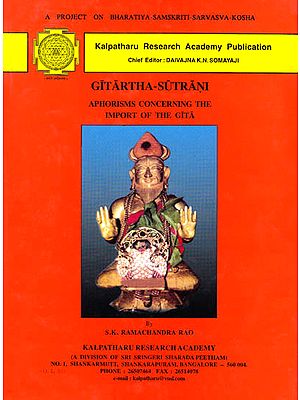