THE SANSKRIT LANGUAGE AN OVERVIEW (History and Structure, Linguistic and Philosophical Representations, Uses and Users.)

The Sanskrit Language by P.S. Filliozat has the rare distinction of being both an introductory book and a new ground-breaking study. It is an introductory book because the reader gets an accurate overview of the language, and it is also a new ground-breaking study because fillozat's approach harmonized two different and complementary stands that often have been at war: the Western historical and comparative approach and the indigenous pandita tradition. Sanskrit is described here from these two points of view: What the native speakers knew and felt about their language, and what the foreign scholars did discover in their historical and comparative quest.

In the Indian branch of the Indo-European family of languages, Sanskrit is unique by its antiquity and stability. It has remained a living language over four millennium. It owes its quality to the efforts of linguistic awareness of the first poets and the learned who used it in the practice of the Vedic religion. Right from the ancient times the grammarian Panini codified the procedures of formation of Sanskrit words. Some centuries later, his commentator Pantanjali codified the procedures of interpretation of text. Sanskrit is properly the language generated and interpreted with such codes. The cultured Sanskrit user or pandit is one who has not only learnt the language, but also knows to use it and to analyse it with the same tools. Thus Sanskrit has always been a powerful instrument of culture and intellectual creation. It has been the learned language of pandits, a link language between the diverse region of the entire Indian subcontinent, the medium of all scientific and technical knowledge, a language of religious teaching and practice. It has spread over the whole of Asia to the East of Iran.

This book, by taking into account the Western and the Indian view, offers a very balanced presentation of its subject and reflects the latest tendencies in indological studies. The richness of Sanskrit comes here in all its fullness: both as a living tool of expression and as an outstanding member of the Indo-European family.

Few languages have had as remarkable a destiny as Sanskrit. It is remarkable first by its longevity. Only Chinese can compare with it in age; for, while Chinese does not have literary monuments as great as the Vedas for the ancient period, it is a language of very great vitality today. Sanskrit is also remarkable in the stability of its form during the course of history. It differs in this respect from Chinese which has changed considerably during the ages. Lastly, and this is perhaps its most original feature, Sanskrit has been elevated to the level of a sacred language, more than any other language. Any description of Sanskrit must necessarily bring to light and try to explain these three feature; longevity, stability, sacredness. They are not natural features of language. They are effects of the action of the users of the language. Who are the users? And how did they use it? It is by contemplating these questions that explanations may be found for the nature and originality of Sanskrit.

From early antiquity speakers of Sanskrit reflected on their own speech. All language exists as a knowledge as well as a state of awareness in the minds of individual speakers. It is important to describe this state of awareness, or in other words what the speaker knows about his language. In the case of Sanskrit we are very well informed about it. Well-read Indians, with vary keen linguistic awareness, have taken care to formulate how they represented their spoken language to themselves. This representation is an integral part of the language, as a component of the conscious linguistic knowledge of the speaker

The historical and comparative approach to language is, as we know, chiefly a revolution of the nineteenth century. It is barely discernible in ancient India. We find traces of it in the mediaeval period. It develops with the coming of the modern age. But it is never a decisive component in the linguistic awareness of the Sanskrit men of letters. Some of the structures of Sanskrit revealed by historical and comparative grammar were unknown even to the most observant among speakers and the lettered. We must therefore describe Sanskrit from these two points of view: what the speakers know about their language, and what they did not, namely, in broad terms the history of the language and its relationship with others, foreign and unknown to the speaker.

A language is a well-ordered system which functions by itself. A speaker with no particular linguistic awareness beyond the competence he his inherited speaker it very well and spontaneously so. A learned speaker acts differently, does not let himself be influenced to the same degree by the system of his language, but by way he views it, can direct its use into different directions, and intentionally adapt it to new use. Lastly he can also contain it in the system which he attributes to it and prevent it from evolving spontaneously. What is certain is that the Sanskrit men of letters profoundly influenced their language. Sanskrit has been preserved and at the same time reshaped more than any other language. It is important to define this third aspect.

Sanskrit at first evolved spontaneously. Then there has been a long period of gestation of linguistic awareness. Thereafter, and only after the Christian era, has there been a reaction of the effects of this awareness on the language, which is often called its stabilization. We shall see below the deeper meaning of the word ‘Sanskrit’, and also that the language to the evolved from whose model has been conditioned by the views of the grammarians. By a retrospective extension it is also used for the archaic from which is the Veda. We shall distinguish between the two forms, which it is necessary to be more specific, by using ‘Vedic Sanskrit’ or ‘Vedic’ for the old from and ‘classical Sanskrit’ for the post-Patanjalian from. 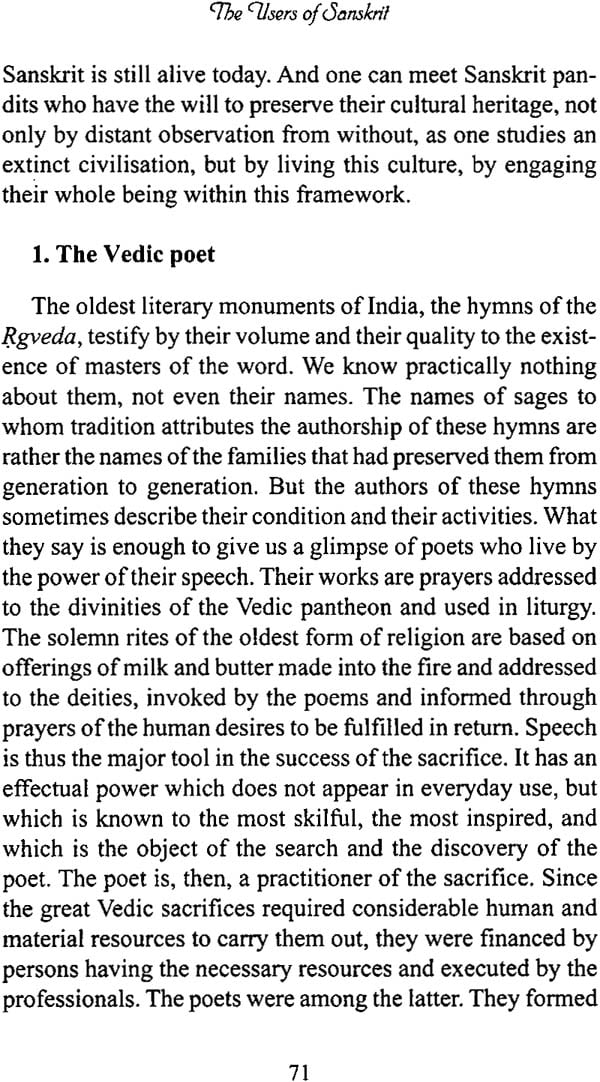