The greatest paradigm shift in Indian culture began in the nineteenth century, when it encountered Western customs; more specifically in 1836 when Macaulay's education policy for India became effective. The chief aim of that policy was to form a nation of clerks steeped in western materialism. Macaulay said:

I have travelled across the length and breadth of India; and such wealth I have seen in this country, such high moral values, that I do not think we would ever conquer this country unless we break the very back bone of this nation which is her spiritual and cultural heritage; and, therefore, I propose that we replace her old and ancient education system, her culture; for if the Indians think that all that is foreign and English is good and greater than their own, they will lose their self esteem, their native culture, and they will become what we want them to be, a truly dominated nation.

Macaulay's education policy was able to achieve its goal. He was successful in creating "a class of persons, Indian in blood and colour, but English in taste, in opinions, in morals, and in intellect"! Indeed, educated Indians welcomed the West whole-heartedly.

Then, the Lord himself arranged for an effective alternative to stop the rumbling chariot of Westernization of India. He himself came as an uneducated humble priest called Sri Ramakrishna, proclaiming the glory of Sanatan dharma! 'In Dakshineswar, only a few miles outside the Victorian metropolis of Calcutta, a city as cosmopolitan and as materialistic as New York, London or Paris, practicing his sadhana, not according to enlightened modern methods, but after the most ancient, most superstitious, most idolatrous traditions of timeless India, Sri Ramakrishna cut the hinges of the heavens and released the fountains of divine bliss.

Swami Vivekananda has said: 'Sri Ramakrishna was the embodiment of infinite ideas... capable of development in infinite ways. Even if one can find a limit to the knowledge of Brahman, one cannot measure the unfathomable depths of the Master's mind.' This man's inner strength was so great, his truth so radiating, that from all over India, educated and uneducated, rich and poor, people came to the temple of Dakshineswar in Calcutta and bowed at the feet of Sri Ramakrishna. The work of salvation, the work of raising India out of her lethargic sleep HAD BEGUN.'

This book traces the process through which Sri Ramakrishna stimulated Hinduism and inspired Indians to come back to the fold of Sanatan Dharma once again.

Diverse courses of worship From varied springs of fulfilment Have mingled in your meditation. The manifold revelation of the joy of the Infinite Has given form to a shrine of unity in your life Where from far and near arrive salutations, To which I join my own.

Many a time, the devotees asked Sri Ramakrishna about the real nature of God, expecting God to have one clear concrete form without any ground of dispute! They were perplexed by the claims made by the votaries of various religions and sects that only their own understanding of God was correct and all others' views were erroneous! Sri Ramakrishna answered: "A devotee describes God just as he sees or perceives him. Different men speak of God differently because they have different experiences of him. In fact there is no ground for confusion and quarrel here. If you can only realize him somehow, he will help you understand everything. How can a man expect to know all about a country which he has never seen or where he had never been?"

What Sri Ramakrishna said with regard to the nature of God is very much applicable to his own self. His wonderful divine life presents a rare combination and synthesis of various types of religious experience and spiritual realizations. It is impossible for ordinary men to appreciate it fully or describe all its sides and aspects adequately. So we find even educated and enlightened people holding vastly different ideas about him. Of course they all accept that he effected a permanent reconciliation of all faiths. But in many cases, they do not realize what in Sri Ramakrishna's life was the real ground of this reconciliation.

Hinduism allows people to follow many gods and goddesses, according to their personal tastes. The Lord reveals himself in different forms to different people, according to their nature - even as human being to some, as god to some - to some he is friend, to some, parent, to some son; for others he is Kali, Shiva, Rama or Krishna or even Christ or Allah.

Sri Ramakrishna was the living personification of almost all these types of spiritual realizations because during his sadhana period, he successfully achieved the ultimate goal of each religion and sect. At the end of each sadhana, the chosen deity entered into him. Therefore he became an embodiment of all gods and goddesses. When the spiritual seekers arrived, he was already an adept in all their paths - a fact which put him in a position to appreciate and honour all the religions of the world. The celebrated British historian Arnold Toynbee rightly held: "Sri Ramakrishna's religious activity and experience were, in fact, comprehensive to a degree that had perhaps never before been attained by any other religious genius, in India or elsewhere." 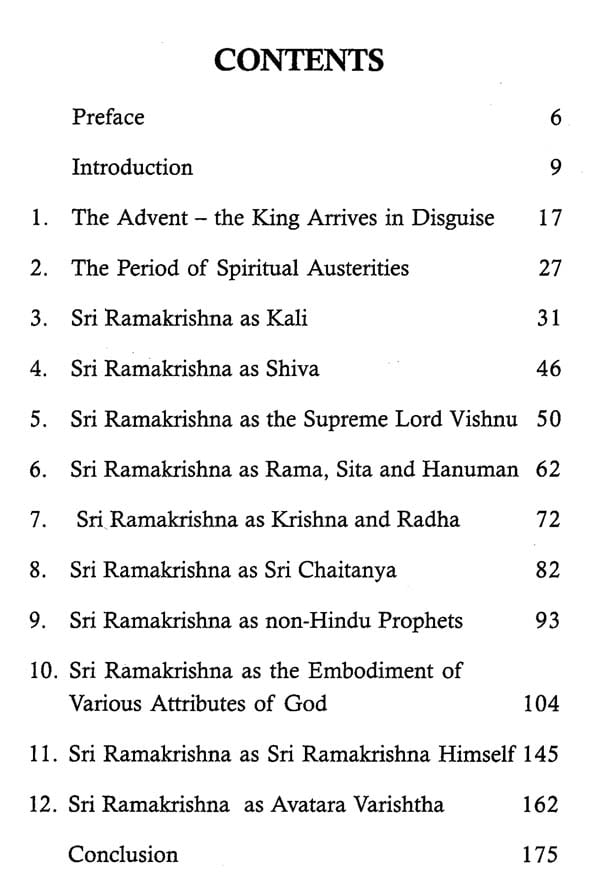 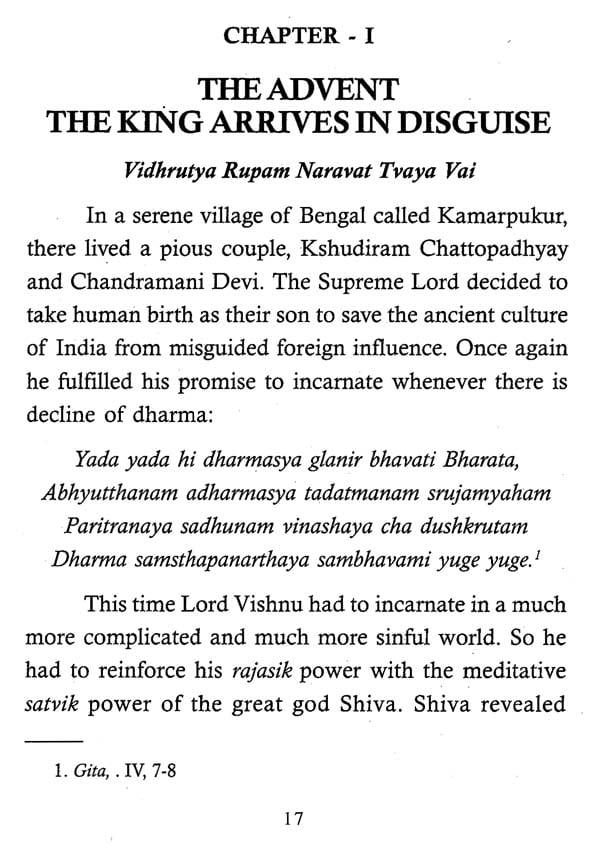 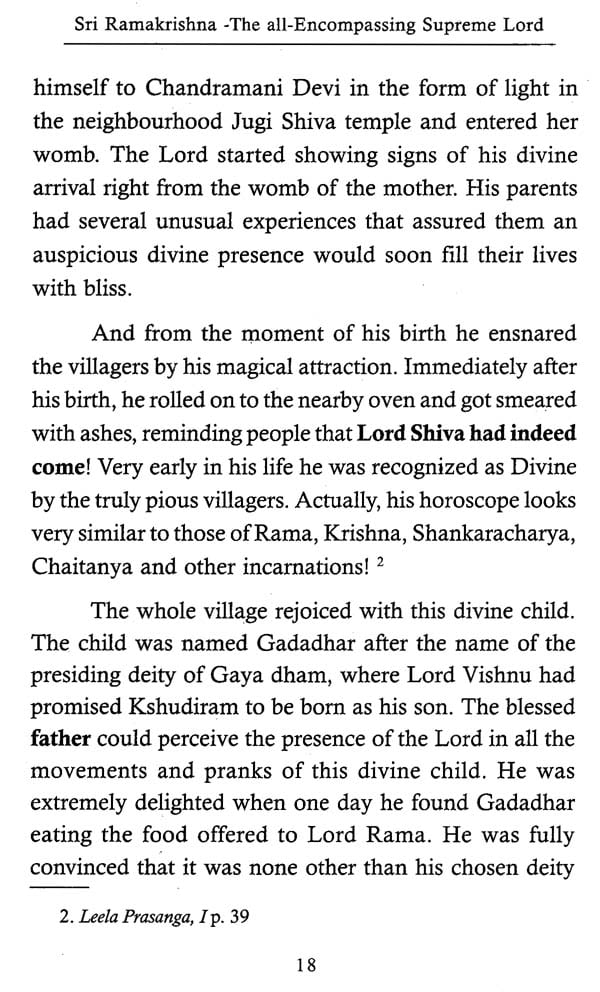 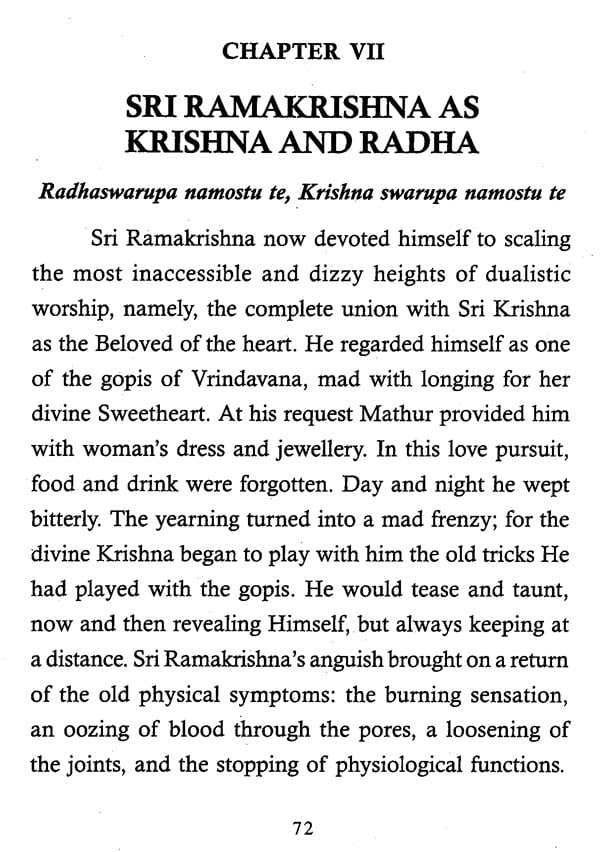 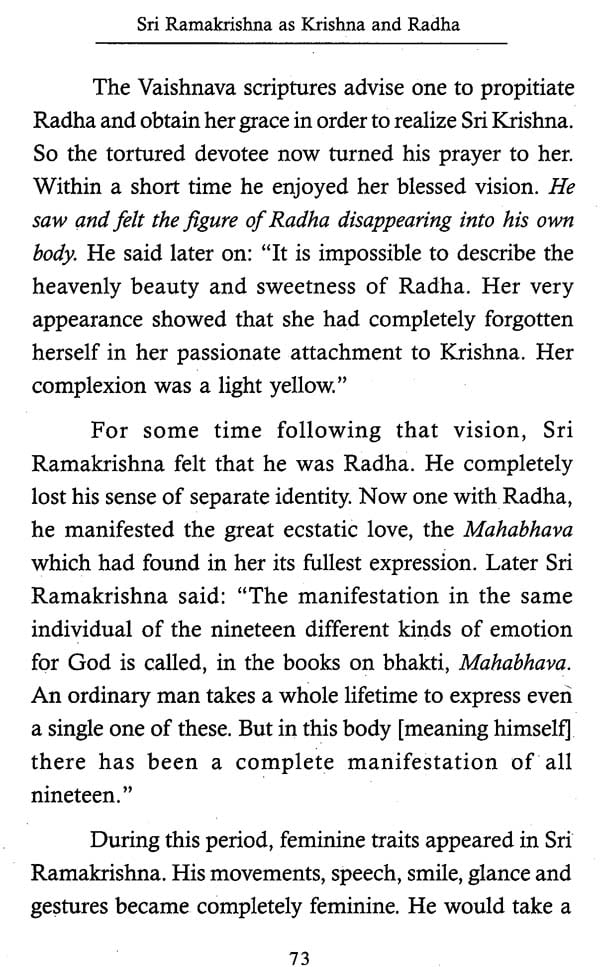 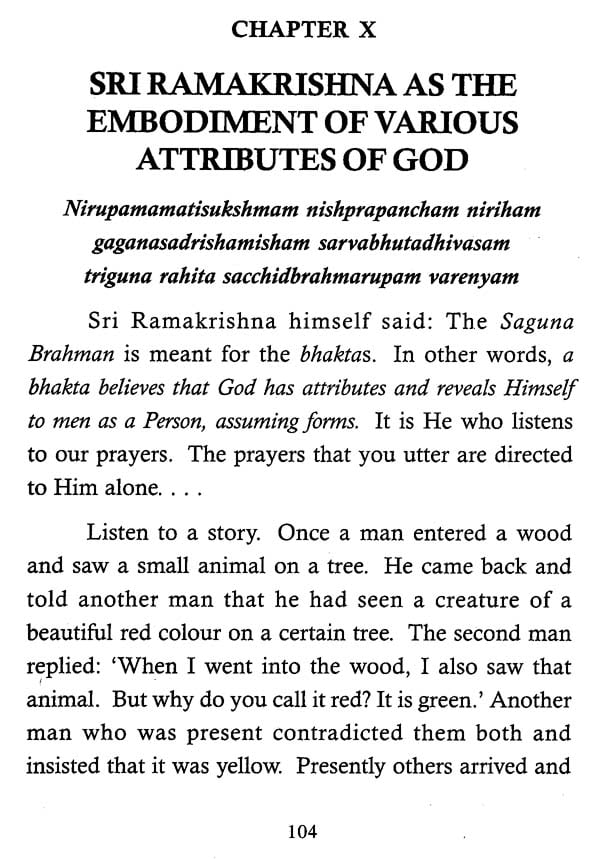 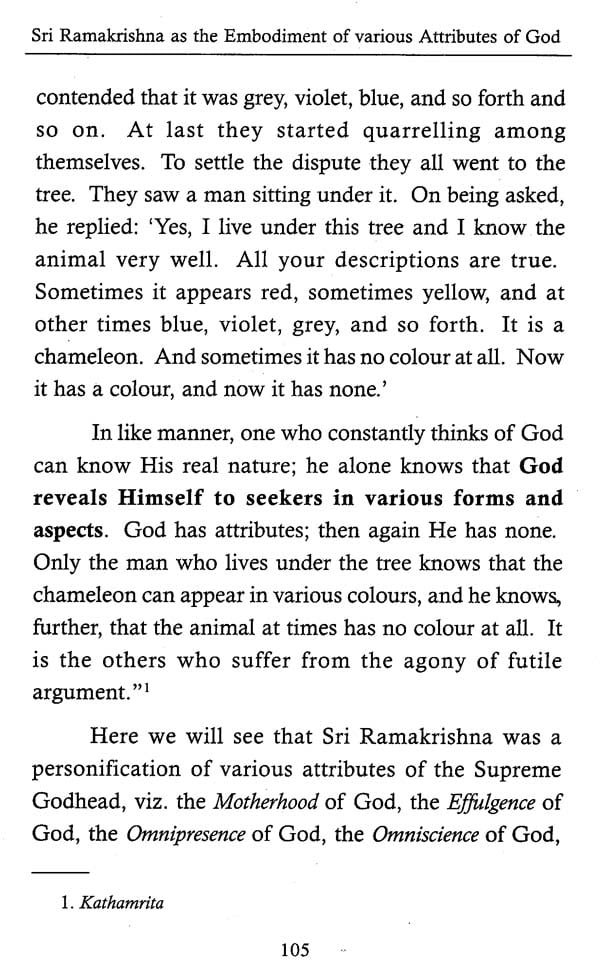