Sri Venkateswara Suprabhatam along with Stotram, Prapathi and Mangala sasanam constitutes the morning prayer recited daily in the early hours in the sacred temple of Lord Venkateswara. This sublime, soul-inspiring panegyric on Lord Venkateswara is remarkable for its sweetness, subtlety of expression and devotional appeal. Composed by Prativadi Bhayankaran Anna, a contemporary of Sri Vedanta Desika, the Suprabhatam has become so much a part of our religious life that mere listening to its recital brings to our minds the beatific, ever blissful image of Lord Venkateswara.

The first verse viz., the Suprabhatam is addressed to the Lord beseeching Him to wake up as the day has dawned and the daily ablutions and rituals are to be performed. In the next part, the stotram, the devotee submits himself to Srinivasa, seeking His benevolence. It concludes with an appeal for enlightenment, for forgiveness and for acceptance of worship. In third part, the poet upholds the uniqueness of prapatti and vouchsafes speedy fulfilment of prayers of those who surrendered at His lotus feet. `Mangala sasanarn', the last part, is an offering of salutations and felicitations to Lord Srinivasa describing His unblemished glories.

The present rendering of this exquisite hymn by Sri B.V.L. Narayanarow is mainly intended for English-knowing readers. His lucid translation and scholarly introduction enable the readers to enjoy the beauty and spiritual significance of this quartet of hymns.

We are happy to bring out a reprint of 'Suprabhatam' for the benefit of devotees.

People all over the world pray, obviously because they believe there is someone who listens and acts. The ardent devotee believes that prayer connects the human and the divine. It establishes a relationship, even kinship with that kingship. It initiates a process by which the human is turned into the divine. Matter turns into spirit.

As he stands before the Lord, the devotee connects himself to a power-centre. That current of divine grace enters into him provided his system has no impurities. The condition of the three-fold purity of thought, word and deed hoe to be met. What is false cannot accept what is true. Truth can be housed only in what is true. A broken vow, for instance, is a violation of the principle of triple-purity and acts as a barrier to the flow of divine grace.

Who prays of what?

According to the Bhagavad Gita, there are four types of the blessed who pray. First, the man in anguish who finds every other agency he has turned to has failed him and there is no one else to turn to. Second, the seeker who wants to know God, himself and the world. Third, the seeker of wealth. Finally, the sage who knows (B.G.7.16) All the four of them turn to God, each with a different intention.

It is not only the mere mortals but even the heavenly beings pray to make the Lord assume an appropriate form every time to protect the good and punish the wicked. Interestingly, Rama and Krishna, incarnations as they are, also pray whenever they undertake to do great deeds.

Thus, from Avatars Purushas to orphans, from Mahatmas to godmen, from kings to commoners, from priests to politicians, from oppressed nations to harassed women, everyone finds it necessary to pray. They seek one thing or the other, make resolution., promises and pledges, soliciting divine sympathy and support.

What is a proper mode of prayer?

Whatever the mode of prayer, it is all worship. It is meditation and affirmation. It is a process of purification. It is an attempt to improve one's concentration to enable the mind turn godward. It is an admission of one's own limitations and an acknowledgment of the power of a superior force. It is a display of humility. It is devotion. It is considered an easy path for the emancipation of the self and it is highly recommended by scholars and saints alike.

It is readily seen when the devotee listens to the story of the Lord, sings it, repeats the Lord's name, adores His feet, worships Him, salutes Him, serves Him, is friendly, or dedicates himself

. These nine, enumerated by that great devotee Prahlada in Srimed Bhagavatam (7.5.23) are equally effective ways of prayer since in all these states, the devotee's thoughts, words and deeds are totally God-oriented. How is language related to prayer?

Our scriptures, folk-tales and personal experiences of many great persons confirm that inter-species as well as intra-species communication through language is possible. When we bless or curse people, there is an implicit belief that language has that miraculous power to make our wish materialize and that our mere saying it is enough for the job to be done.

Why pray early in the morning?

An early morning prayer indirectly tells us that it is not a once-in-a-way activity but should become an everyday exercise. Also, a person can concentrate better early in the morning. The day gets sanctified and assures the devotee that the rest of the day will go off well since It began with a good session of prayer. Later in the day, the daily chores are likely to be very distracting, making it difficult for the person to concentrate.

The prayer protects the individual from sliding into unsocial, sinful activity during the rest of the day. It reminds him of the need to be unselfish, and of his social responsibility thus awakening his conscience. He becomes a model and an example to others, too. 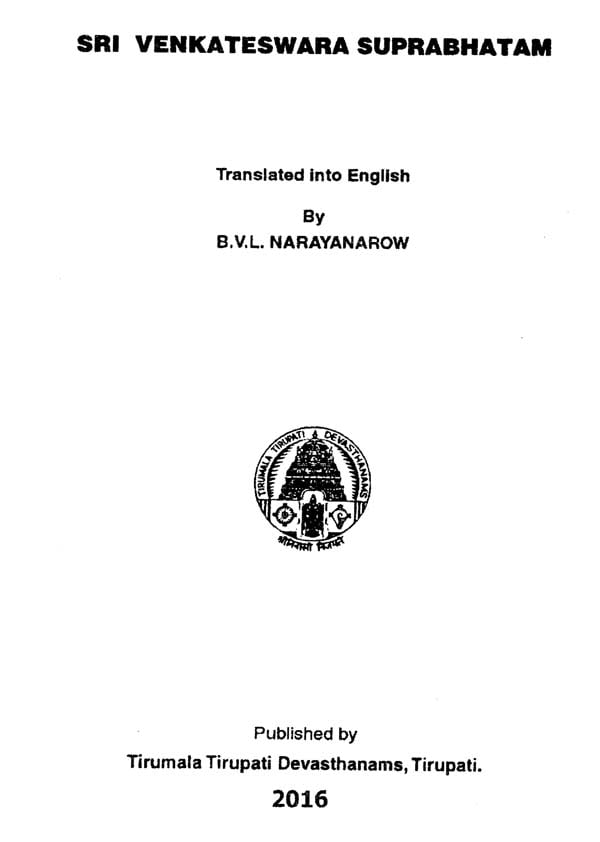 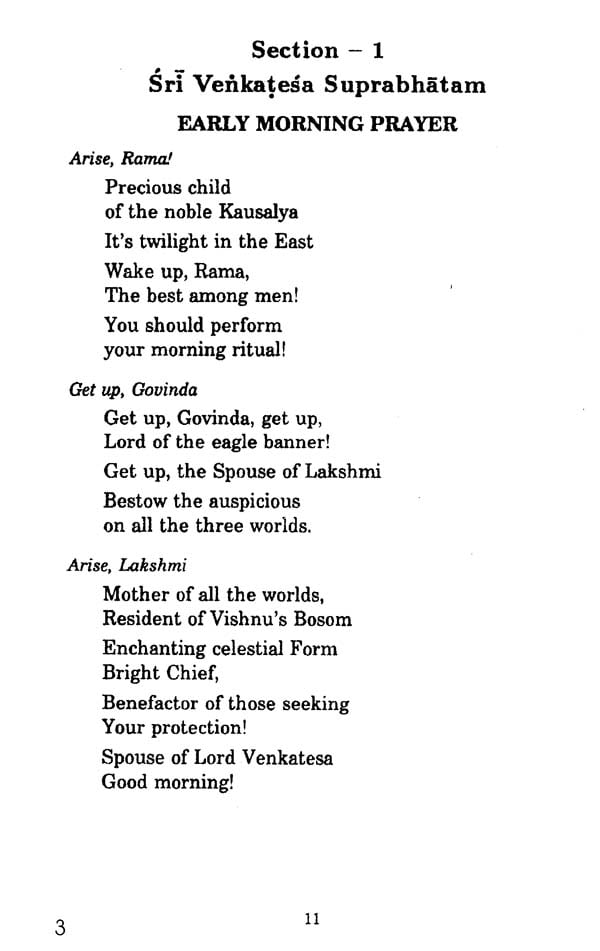 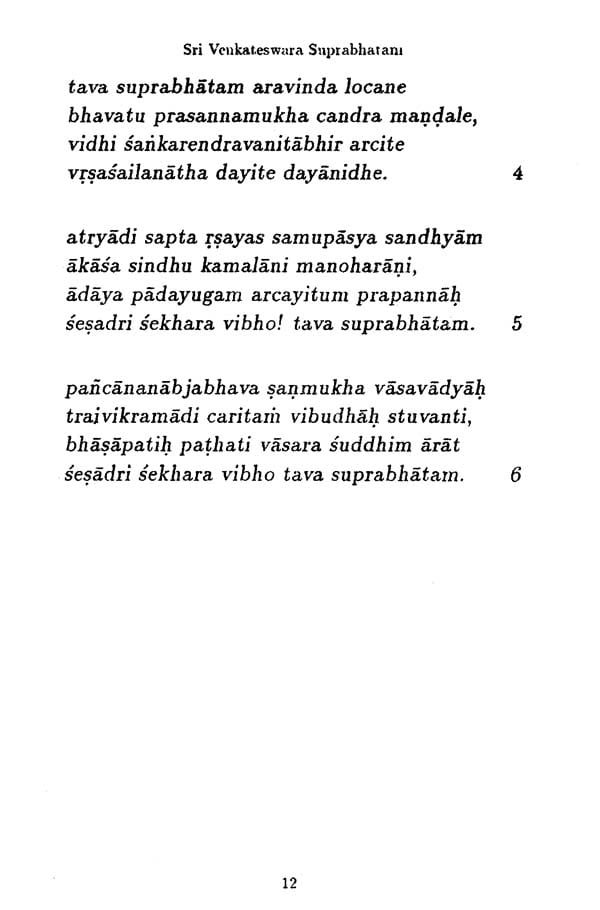 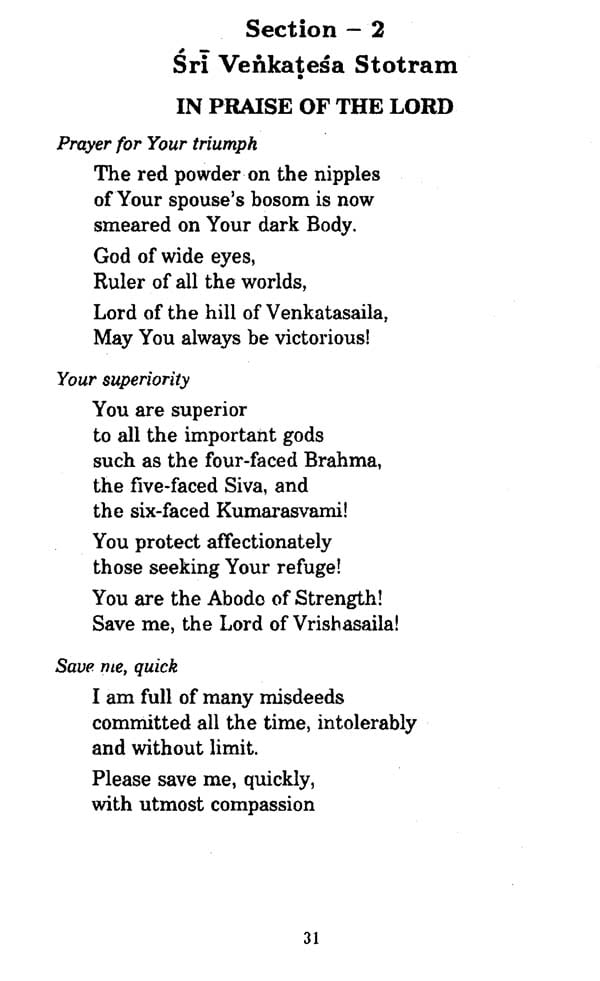 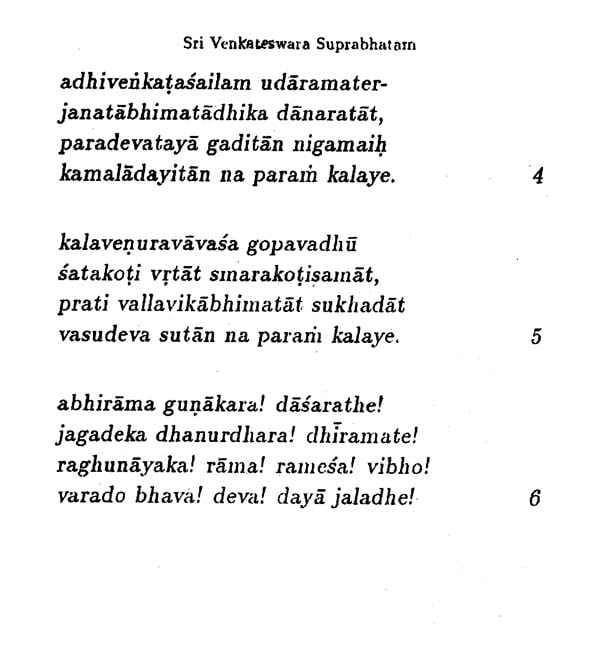 The Glory of Brahmotsavas of Lord Sri Venkateswara
By Dr. T. Viswanatha Rao
$16