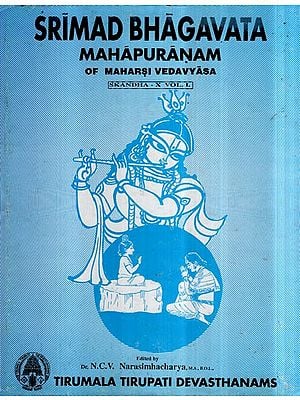 Sri Bhagavatha Purana Commands Universal appeal to all the sections of the people. Being a work of great repute it exercised profound influence upon the philosophy and life of the people perhaps more than any other Purana. The spirit and purport of the Vedas are found hidden and so they are not under- stood by a common man whereas eternal truths enshrined in the Vedas are elucidated in this celebrated Purana.

The Bhagavata has several outstanding features for which it has been extolled by the connoisseurs and after the advent of the Bhagavata many Puranas were either relegated to the background or eclipsed into oblivion. The Bhagavatha Purana is a happy synthesis of Veda, Purana and Kavya. It is said that Vedavyasa composed the Purana on the timely advice of the celestial sage Narada with a view to dispelling the gloom and depression that had· overcome him even after producing a magnum opus, Sri Mahabharata. The greatness of the Bhagavata has been rightly ‘Called as the Ambrosia or Amrita churned out of the milky ocean of the Vedas. The word 'Bhagavata' is very significant as it is replete with various senses. The five significant letters 'Bha', 'ga', 'va', 'ta' and 'm' suggest the quintessence of the Bhagavata 'Bha' stands for Bhakthi (the devotion) 'ga' for the Jnana (the knowledge), 'va' for vairagya (the renouncement of worldly wishes and passions), 'ta' for tattva (the real nature of the Supreme), and 'm' for moksha (the emancipation from the worldly bonds). Hence a study of the Bhagavata yields all the four virtues.

It is with a view to fulfilling the exacting demands of the scholarly world, the T.T.Devasthanams has undertaken the sacred task of bring out the critical edition of Sri Bhagavata with the commentaries of the three leading schools of Indian Philosophy, embellishing the text with all the special features of a critical edition. All the necessary efforts have been made by T.T.Devasthanams in this direction to make the Bhagavata available within the reach of all at a subsidized price. So far, two thirds of the editorial work of the entire text have been completed and kept ready for printing. The first volume of (the first Skandha) the Bhagavata was edited and published in 1989. It is a matter of pleasure that it was critically acclaimed for its meticulous and flawless editing.

After completing the editing of the second, third, fourth and fifth Skandhas, we have now taken up editing of the tenth Skandha, which is the heart of the Bhagavata, as it were, for, this skandha deals with the astounding exploits of Srikrishna Bhagavan. The Skandha has been split into three volumes and the first volume has been edited and will be published shortly.

I am confident that this critical edition of the Bhagavata Purana will be useful for both the learned scholars and the seekers of Truth as well.

It goes without saying that the munificent Management of T.T.Devasthanams is making strenuous and incessant efforts for maintaining our cultural heritage enshrined in our veritable scriptures. It strains every nerve to sustain the Religious - Philosophic outlook wherein the Nation's peace and prosperity lies. With a view to reviving the Sanatana Dharma in the nation, to propagating and instilling the Bhakti in the minds of the Hindus, to conveying the message of Rishis to mankind, to disseminating the inestimable greatness of Hindu Culture for the benefit of common man the T.T.Devasthanams founded many an institution such as the "Dharma Prachara Parishad" "The Bhagavata Critical Edition Project", "The Annamacharya Project", "The Dasa Sahitya Project", "The Alwar Divya Prabandha Project", "The Recording Project", "The Publication Cell" and the like.

The Bhagavata Project is one among such establishments. The Srimad Bhagavata of sage Krsnadvaipayana Vyasa occupies a unique place not only in Sanskrit literature but also in the Indian Theosophy itself. Besides inculcating an unflinching faith in, an everlasting devotion to Lord Srimannarayana, this Mahapurana successfully deals with the enfoldment of the mysteries of the creation with scientific precision. A true follower of Bhaghavata Cult does not harbor hatred or ill will for any living being. Such are the teachings we obtain from the upakhyanas, stories and moral exposition.

But, as ill-luck would have it, the Srimad Bhagavata which has learned commentaries has not been available and a flawless mere text to facilitate even parayana has become a rare commodity. Such being the case, the noble management of, T.T.Devasthanams has undertaken the laborious and expensive enterprise of publishing a critical edition of the Srimad Bhagavata to meet a long - felt need for such an edition as ours. The Publication Department of T.T.D. has brought out a number of standard works on Agamas, Indian Philosophy, Art and Architecture, commentaries on Philosophical and Religious Texts, which have been well received by the scholarly devotee public.

One need not offer any excuse for publishing so sacred a text such as the Srimad Bhagavata, since this Maha Purana commands universal appeal and popularity. It is believed to be an encyclopedia of Bhakti Doctrine. It is a text 'Par - excellence' occupying the esteemed position among the eighteen Puranas. The fact that while the great sage Veda Vyasa could not acquire peace of mind even after composing the Mahabharata the 'Magnum Opus'; he was advised by Narada the celestial sage to compose a Purana describing the marvelous exploits of Lord Sri Krishna to dispel mental depression - speaks volumes for the greatness of the Srimad Bhagavata, which has been accepted by all schools of Philosophy as the most authoritative text on· a par with the sacred scripts, i.e. the Vedas. Because of its everlasting popularity it has been commented upon by many great exegetics belonging to various Schools of Philosophical thoughts. The Srimad Bhagavata has been extolled that this is a 'navanita' or butter secured by churning the milky ocean of the Vedas rendering it palatable to literates as well as illiterates who have an aptitude for obtaining the fruits of the study of the ancient Vedic lore. Further, the Srimad Bhagavata is regarded as the repository of Bhakti (devotion) Doctrine with all its varieties and manifestations. Hence it is rightly called as the Bhakti Bhasya.

Such being the case there is an imperative demand for a standard critical edition of the Srimad Bhagavata. It is true that already there are numerous commentaries on this Purana, published. But the editions so far published have mistakes in printing and matter, variations, deviations and interpolations in the original ~ext as well as in the commentaries. However, there was no good attempt ever made to bring out an authentic version, on account of which confusion and absence of. clarity was resulted.

In fine, the preparation of a good critical edition of the Srimad Bhagavata, capable of 'warding off incongruity arising out of diverse versions, is the most important obligation. Having fully understood the value, greatness and the utter need for producing a flawless and correct text with important commentaries, the TTD Management decided that a sacred task of publishing a critical edition of the Srimad Bhagavata should be embarked on. Hence "The Bhagavata Critical Edition Project" was established in 1981. 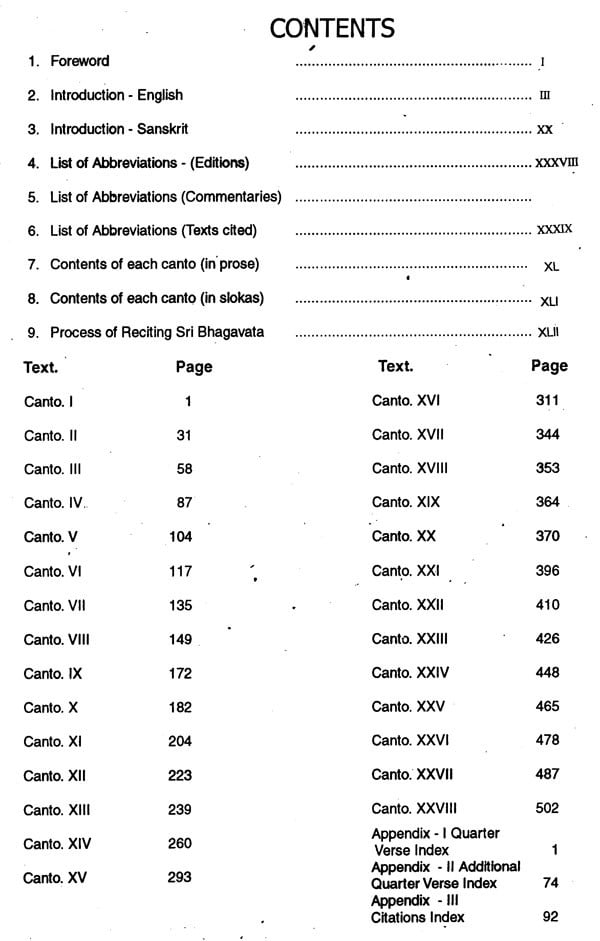 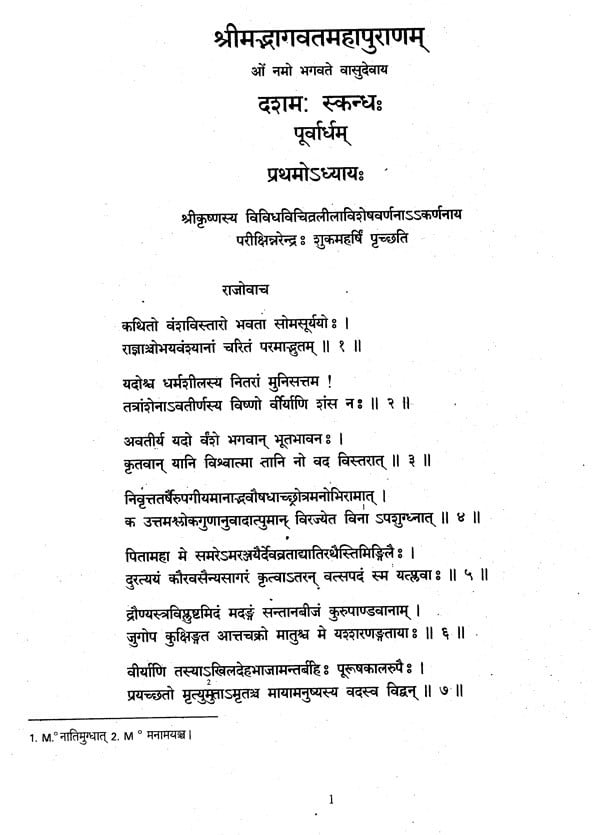 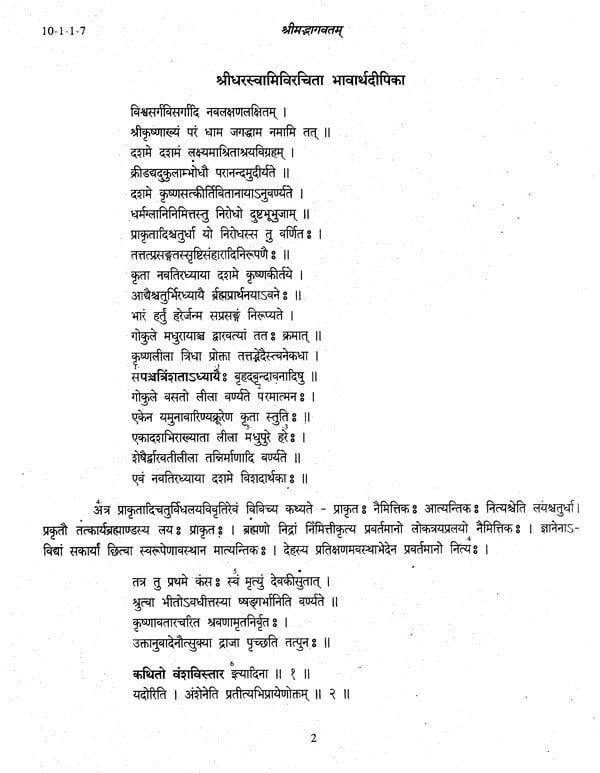 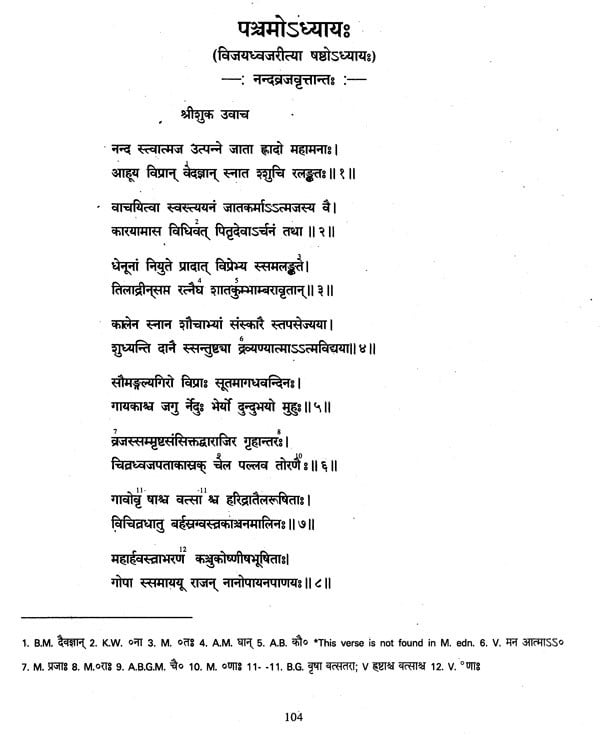 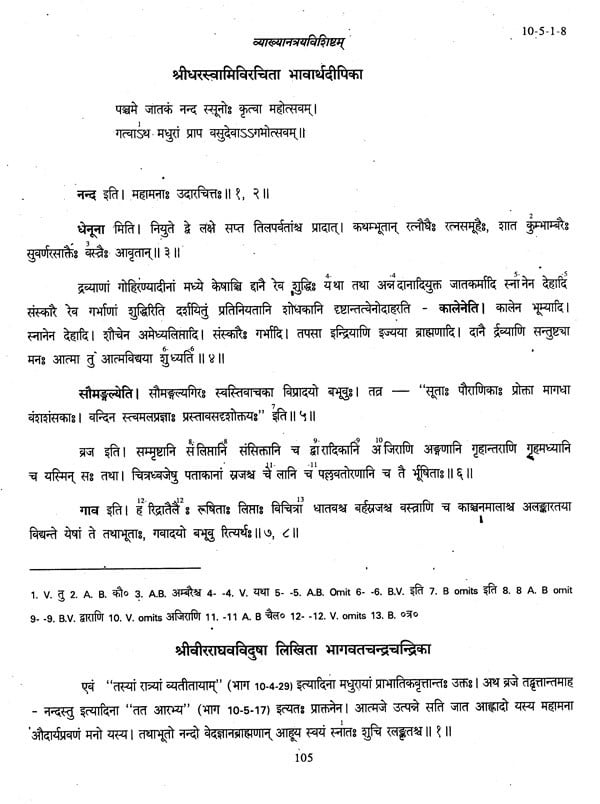 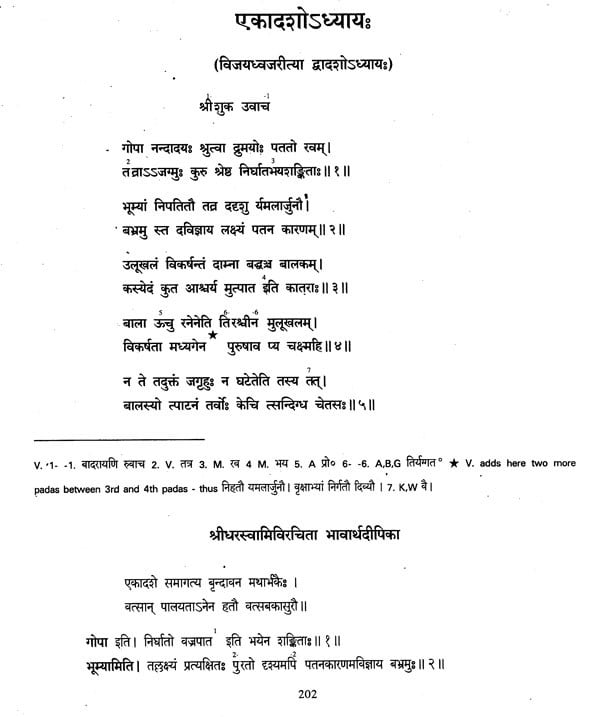 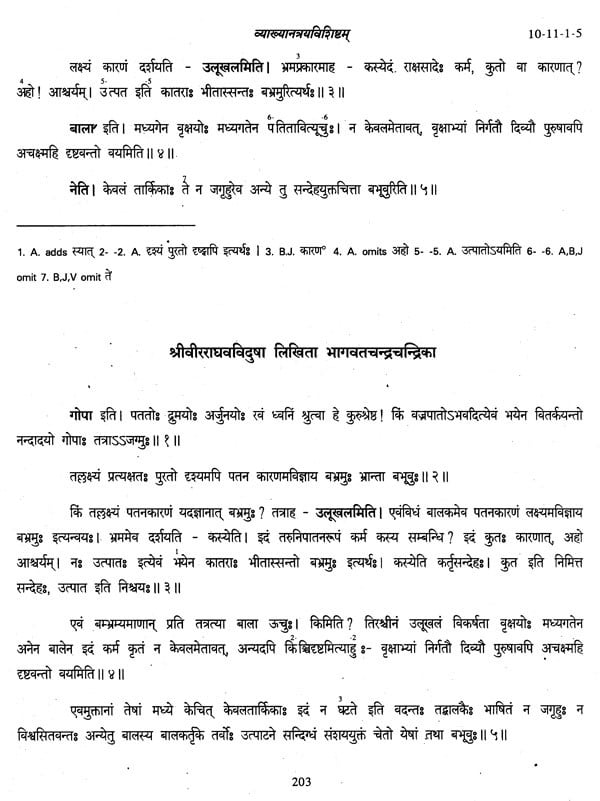 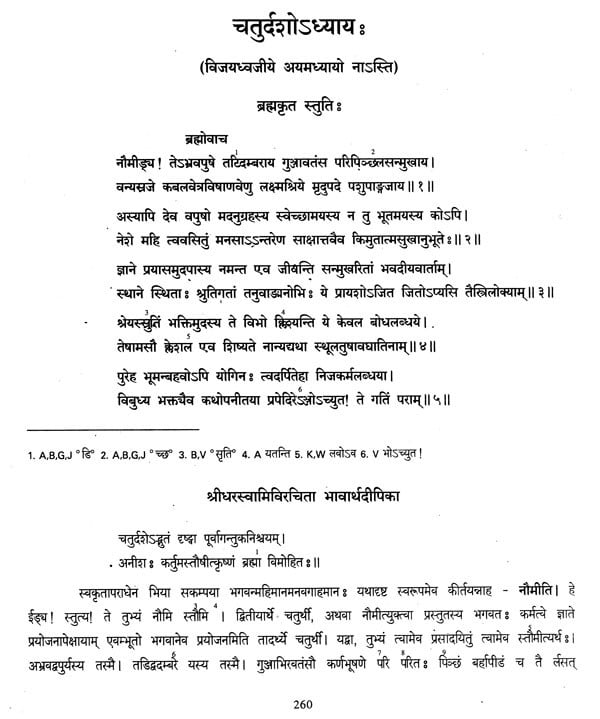 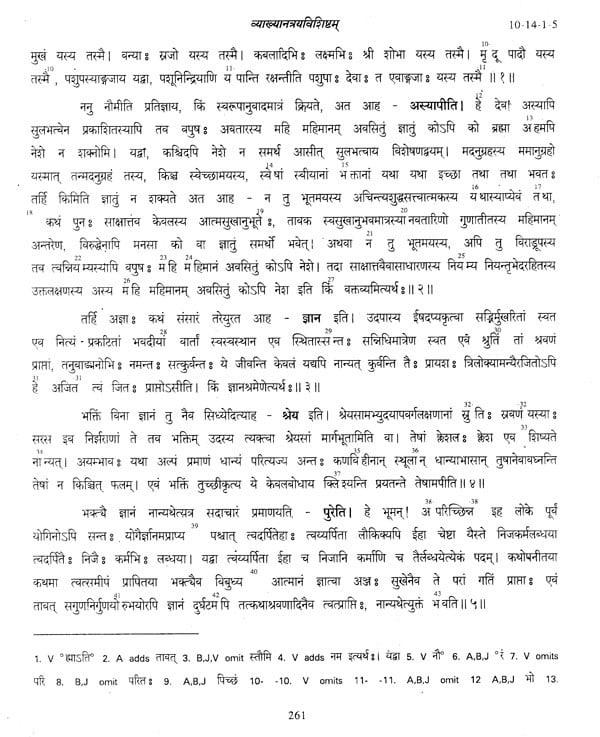 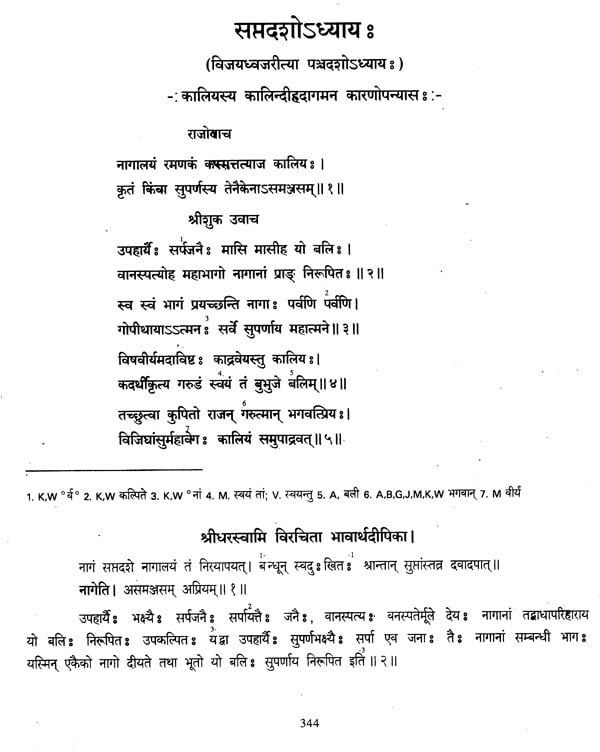 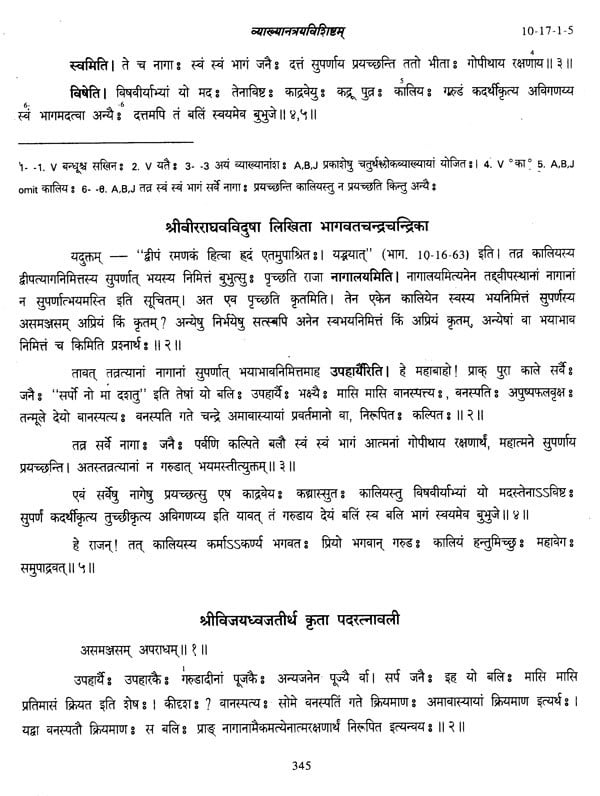 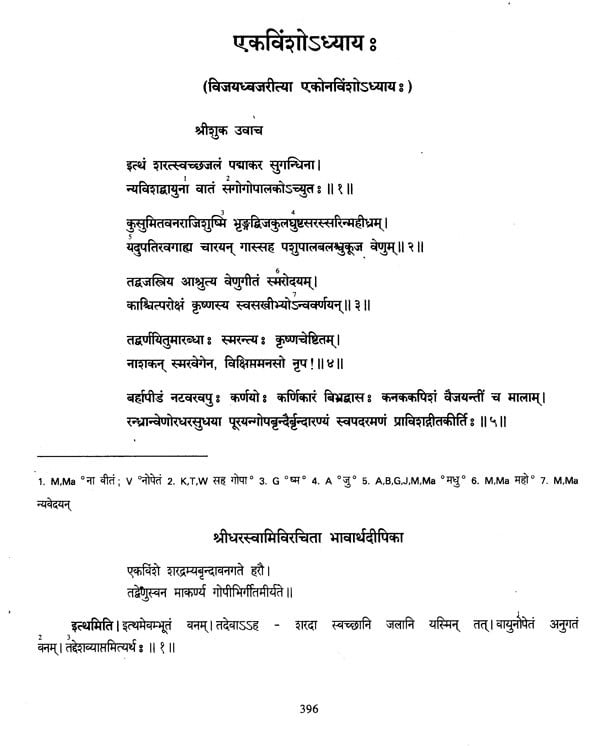 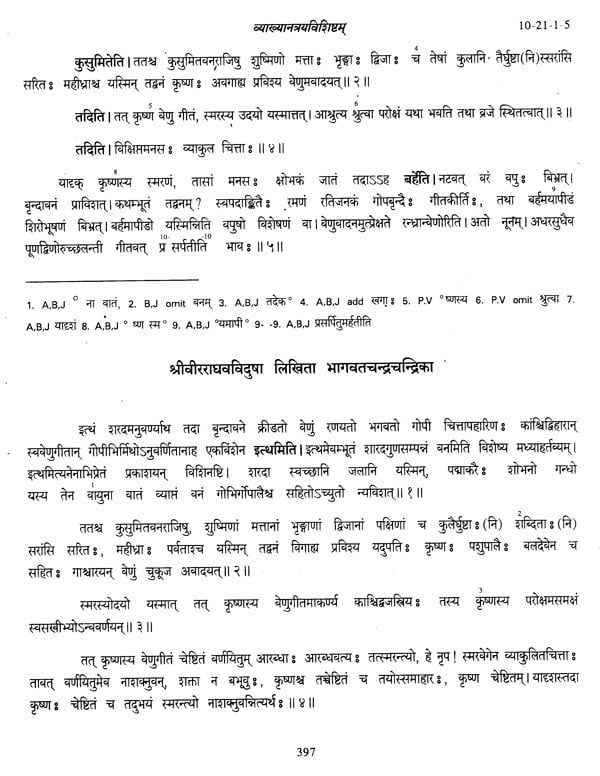