Stories from Saratchandra (Innocence and Reality)

This book is a collection of twelve widely acclaimed short stories of Saratchandra Chattopadhyay, one of the doyens of Bengali literature. The stories bring to life themes covering perceptions of childhood, a refusal to be rule-bound, transition from the innocence of a child's world view into hard reality, and the world as it appears to a child.

Divided into two sections, the first groups of stories portray childhood in all its unburdened innocence while the latter section leads on to deeper sensibilities-the everyday experience of casteism, the lived reality of social hierarchy, and the bonds of almost filial affection forged between man and animal that sustain both.

The translations reveal Saratchandra's keen eye as a social commentator, presenting a vivid picture of life in rural Bengal during the early twentieth century. From stories such as 'Laalu' to 'Mohesh' to reminiscences of Saratchandra’s own boyhood, Stories from Saratchandra offers a glimpse into the oeuvre of Saratchandra's work.

Saratchandra Chattopadhyay (1876-1938) was one of the most prolific novelists and short story writers from Bengal in the early twentieth century. Among his novels, his most notable works include Baikunther Will, Pather Dabi, Devdas and Srikanta; stories such as 'Mejdidi' and 'Mohesh' rank among the most loved. Saratchandra's powerful 'portrayals of human, economic and social distress, colonialism, middle-class lives and the rural world are still widely read, translated and have been adapted into films.

Anindita Mukhopadhyay teaches History in the University of Hyderabad and was formerly fellow at the Indian Institute of Advanced Study, Shimla. She completed her graduation from Presidency College, Calcutta University, Kolkata, her Masters and M.Phil. from Jawaharlal Nehru University, New Delhi, and her Doctoral dissertation from the School of Oriental and African Studies, London. She has translated Rabindranath Tagore's ‘Sesher Kobita'- The Last Poem (2007), and authored Behind the Mask: The Cultural Definition of the Legal Subject (2013).

As his life was drawing to a close, Saratchandra Chattopadhyay (1876-1938), at a public felicitation on his 57th birthday, summed up his literary career in a characteristic manner-half earnestly, half humbly:

I have received much more than my share of gifts from the people of my country for whatever little service I have rendered to literature.

I remember especially on this day, how little of this I can truly claim, and what a big debt I owe. This huge debt is not something I owe only to the literary greats who have preceded me. Those who have given their all to this world, and got nothing in return-the deprived, the weak, the oppressed-though they are human beings, their tears have never counted in the eyes of other people; who could never imagine that in their sad, unfortunate lives, they could lay claim to anything that was spread out before them: to these human beings my debt is also very high. Their pain has unlocked my lips, they have sent me to the people to carry their plaint. I have seen injustice, oppression: I have even seen objective justice meted out to them-which is intolerable...

I know ... spring comes full of beauty and wealth . . . but the frame on which my eyes remained fixed did not permit them entry. . .. The moment one looks into my writing, this poverty is starkly visible. But what I could not feel in my heart, I could not serve up as soulless offerings dressed up in pretty words ... There are also other things, things which I do not understand, and so I have never written about them ... And thus, my service to literature has remained narrow and my themes, instead of casting their nets far and wide, are limited within tight, tiny parameters. But I can certainly claim that I have not written what I have not felt, and not being dishonest is enough for me (satyabhrashta).

A younger contemporary of Saratchandra, Hemendrakumar Roy, talks of Saratchandra's entry into the literary field due to the constant prodding and pushing by friends who were providentially editing literary journals, and were on the lookout for talented writers. The first story, 'Bododidi' (Elder Sister) was published in Saraladebi Choudhurani's journal, Bhaarati, without Saratchandra's knowledge.

Saratchandra had certainly addressed the central lack in middle-class perspective in which, till he partially redressed such a skewed social vision, the voices and the faces of the oppressed remained generally unheard and invisible. He had made the middle class (upper and lower) his very own turf, in critique and in panegyrics. As he was very well acquainted with the rural communities in the villages-the well-off, the rich, the poor and the marginalized groups-he drew the pith of his stories from his own personal exposure to therm. With the exception of two stories, 'Mohesh' and ‘Abhaagi's Heaven' ('Abhaagir Swarga'), both included in this collection, it is Saratchandra's middle-class protagonists who are the vectors of social change and quiet rebellion. Perhaps initially, they blend in with their environment, but under the compulsion of a cathartic moment, their mental worlds shift, change and reconfigure-which then run against standard perceptions of social codes and behavior.

This collection of short stories, for the convenience of the reader, has been divided into two sets. The first set of stories is around Saratchandra's perceptions of childhood. It is important to note that girlhood is strictly absent from these stories. The reasons are clear. First of all, girlhood was visible only through familial lenses, and remained confined by and largely within the domestic sphere of households. Then again, girls between ten and twelve were considered too old to roam around without adult supervision, and this is noticeable even within Saratchandra's novels and stories. The girls of very educated families were exceptions but, by and large, there was not much difference between urban and rural divides on this social restriction on the girl child.

Further, Saratchandra understood the 'child' as a marginalized, invisible and vulnerable member of the society. Though Srikanta, as a novel, could not be included in this collection, the first three episodes in Part I of Srikanta depict a regimented world of children, where power emanated from the male authority in the household and flowed through the older brothers: the younger children were supervised by these fairly tyrannical seniors who took advantage of the powerlessness of these much-younger cousins. Within all these stories, there is a social context of power and domination within the familial affect, which was a social reality, despite being occasionally invisible in the frame of a story. In the three Laalu stories, the 'father' and all father figures have an irresistible field of power. Old matriarchs are equally awe-inspiring in stories like 'A Day's Tale From Some Fifty Years Ago' ('Bochhor Ponchaash Purber Ekta Diner Kaahini') and 'The Child-snatchers' ('Chheleydhora').

As these were joint families, there were a large number of children-young and old. Within the family, then, there were collective memories of oppression and injustice, which cohered the bonds of affect and friendship. Children from poorer kin groups also found place within this familial community. Saratchandra's stories-and Srikanta is no exception-highlight the extended family as the 'buffer zone' between the core family, the impoverished relatives and the world. Srikanta, the rebellious protagonist, an autobiographical reflection of the author himself, was also a young boy staying in a relative's house for his education, so that he could grow up to be a successful adult. But his friendship with Indranath, an unsuitable companion, jeopardized this natural progression materially :

People who know me will say, 'That wasn't a wise move, boy! In order to get a good education, you left the village and had to stay with relatives. Why did you seek his company ...

Only the Omniscient One will be able to say "why", out of so many persons, my heart and mind yearned only for the company of such a never-do-well ... 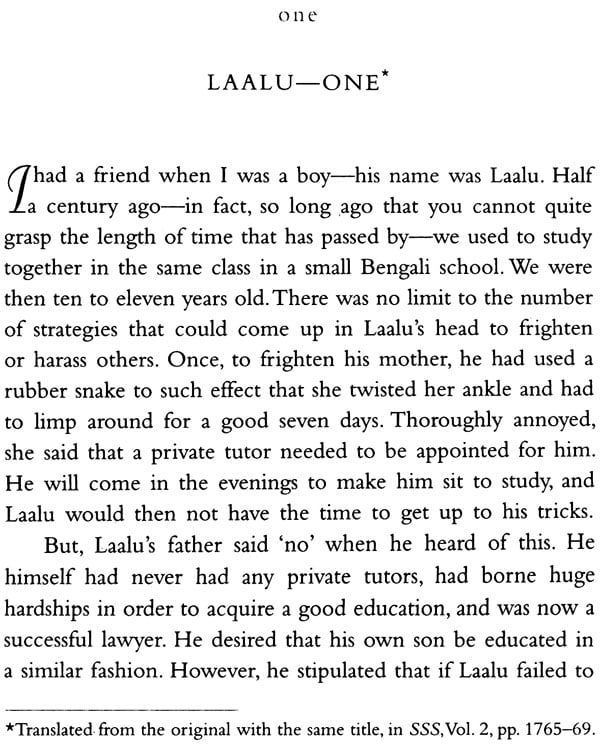 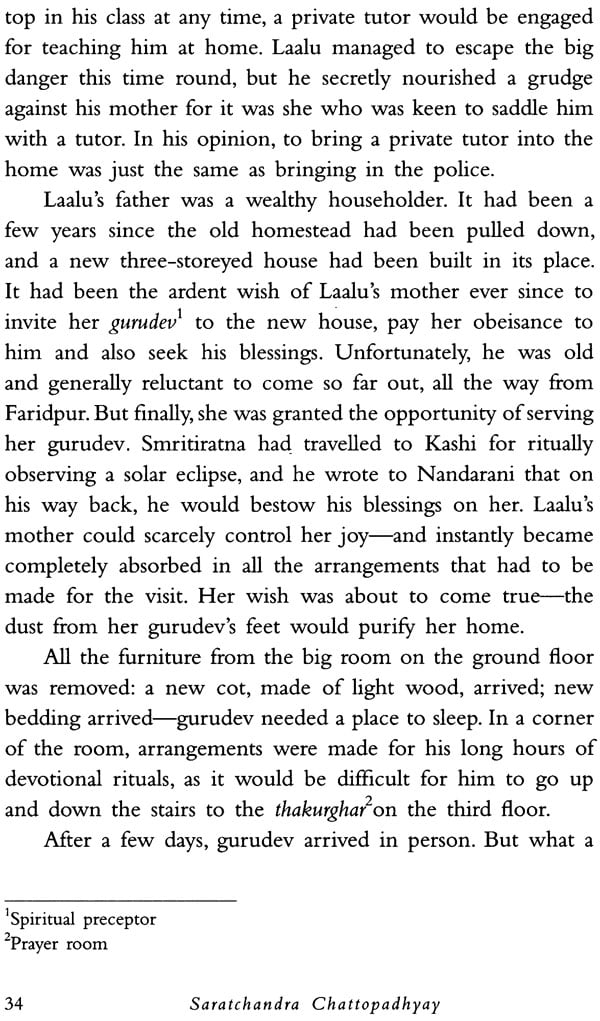 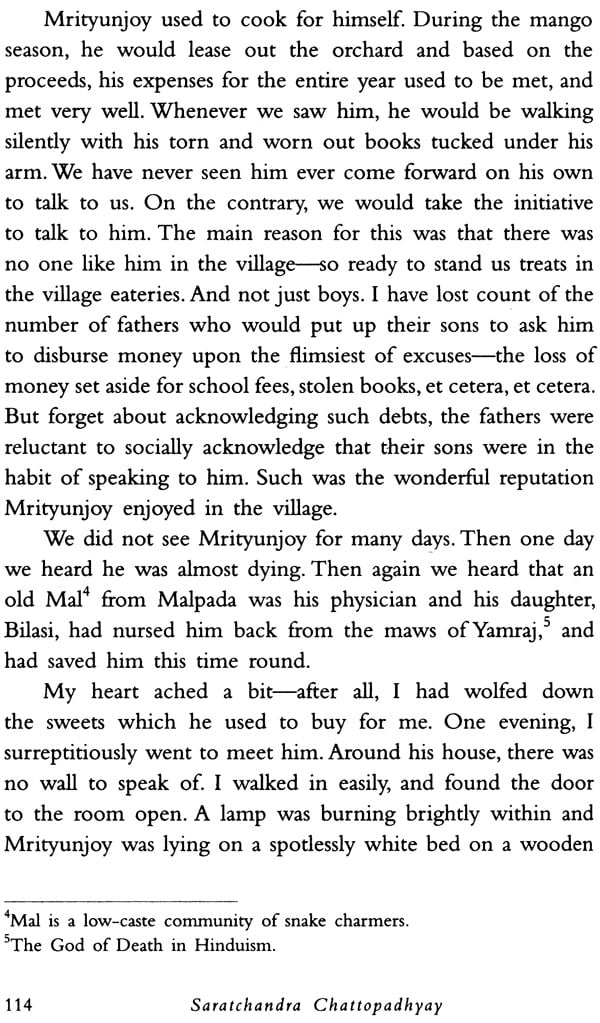 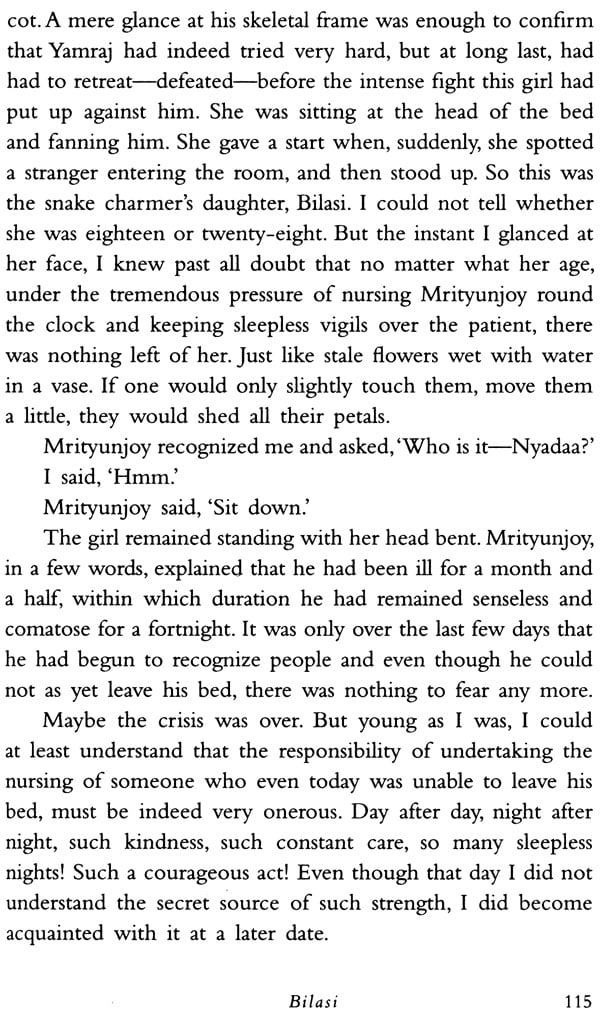 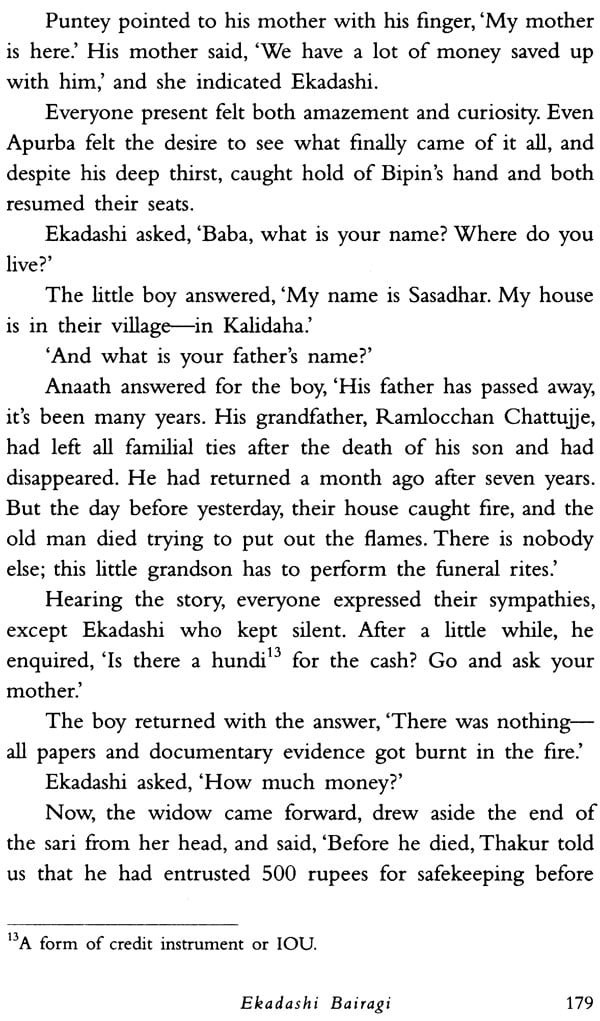 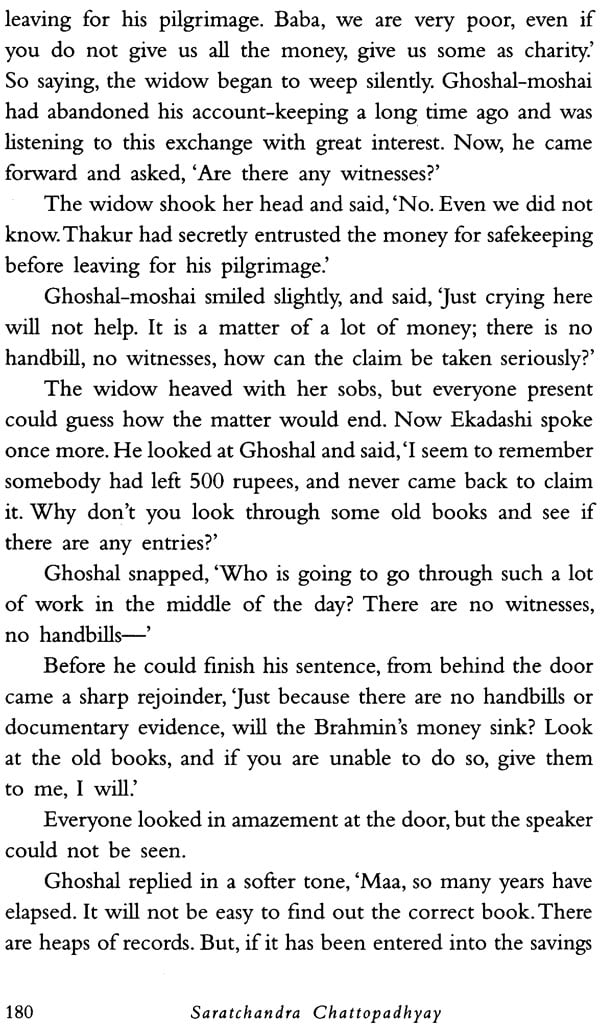 Advanced Course Reader in Malayalam (An Old and Rare Book)
By V. Saratchandran Nair
$29
Out of Stock An Intensive Course in Malayalam (An Old and Rare Book)
By B. Shyamala Kumari
$51
FREE Delivery
Best Seller