Towards the end of the eighteenth century, a lone pilgrim reached Gujarat and joined a small ashram in Loj. In time, his followers not only accepted him as the leader of the ashram but also as the manifestation of the divine, and called him Swaminarayan. His followers increased rapidly and today Swaminarayan Hinduism is a transnational religious movement with major centres in India, East Africa, UK, USA, and Australasia.

In a first multidisciplinary study of the movement, this volume provides new and vital information about its history and theology, as well as its transnational development, and brings forth current academic research from fields as diverse as the arts, architecture, sociology, and migration studies, among others.

It analyses the philosophy, conduct, and principles that guide Swaminarayan Hindus and provides a case study of the historical and social processes of adapting religious traditions to shape new identities in response to evolving social, economic, and political structures.

Yogi Trivedi is Adjunct Professor in the Graduate School of Journalism and a doctoral candidate in the Department of Religion or Columbia University, New York, USA

A lone pilgrim entered Gujarat in 1799 and joined a small ashram at Loj, thereby claiming Gujarat as his home. That seemingly insignificant event, like a pebble cast into a huge lake, created ripples and waves that shaped the religious landscape of Gujarat and influenced developments far beyond the borders of Gujarat and of India. Tracing some of the shimmering effects of those waves in shaping religious identity and society in history, literature and theology, and the arts is the focus of this book.

The life of the founder of Swaminarayan Hinduism is sketched under his four names. Ghanshyam (also a childhood name for Krishna) was his childhood name in Chhapaiya near Ayodhya in Uttar Pradesh, where he was born to devout Brahmin parents in 1781. At age eleven, he left home for a time-honoured pilgrimage of ascetic wandering as a student brahmacari (brahmachari, celibate student) through the sacred places of India. During this period he was known as Neelkanth. Images of Neelkanth as an emaciated youth are popular in temples as memorials of that journey. He travelled north into the Himalayas and then down the eastern coast of India into the south. Neelkanth's yatra (yatra, journey or pilgrimage) is recounted in the big-screen movie Mystic India, based on hagiographies in Bhaktaaruamani. (Bhaktachintamani), Harivanvtcaranokavvam. (Harivanvicharanakavyam),Harililamrt; (Harililamrut), and Satsafrgrjfvanam (Satsangijivanam). He travelled north to Loj in present-day Gujarat, where he joined the small ashram of Ramanand. He was accepted as Ramanand's successor and leader of the ashram and received a new name, Sahajanand Swami. In 1802, he began a successful career as a teacher and leader until his death in 1830. During his life, his followers acknowledged him as a current manifestation of Krishna, the Supreme Being, and the highest reality, Purusottam (Purushottam). He received devotion and honours as 'Swaminarayan'-Narayan being one of the names of Vishnu.

With the names Sahajanand Swami and Swaminarayan (interchangeable in the literature), the success of his ministry until 1830 prefigured the future growth and spread of his movement for the next two centuries in India and abroad. He attracted a large number of followers from many castes and regions, and came to the attention of colonial officials during the period of transition and change when British influence and control expanded in Gujarat. He initiated some 2,000 men as sadhus who took vows to renounce the world and become leaders of the new religious movement. He built six temples throughout Gujarat (or perhaps eight; the Vadtal diocese names six, and the Ahmedabad diocese adds two more), and installed an image of himself in some of the shrines, inspired a new body of religious lit- erature, proclaimed a strict moral code that was valued by British and Indian observers as helping bring order to a chaotic region during a troubled time. The primary Swaminarayan sacred texts are a code of conduct, the Shikshapatri; a series of his theological discourses, the Vachanamrut; stories from his life, the Satsangijivanam; and an administrative document regarding the appointment of the acharyas (spiritual leaders) at Vadtal and Ahmedabad, the Lekh, The dividing line between the human and divine in India is thin, and his follow- ers came to worship him as a manifestation of the divine. A new adaptation and interpretation of Vaishnava theology developed in the literature, rituals, art and architecture, and devotion of this branch of Hinduism (see Williams 2001).

Swaminarayan Hinduism provides a case study of the historical and social process of adapting religious tradition to create new identities in response to evolving social, economic, and political changes. Such changes-rapid or slow-precipitate realignments of social location and identity in society. Religion is a powerful force in culture in large part because it is effective as an agent for conserving aspects of social order and ideology, based on tradition, and also an agent of change propelled by devotion. Religion becomes very important in times of rapid social change, when order is threatened by chaos, and most effective when adaptive leadership and revised ideology preserves elements of the tradition while pointing towards a more promising future-Janus-faced, as Brian Hatcher juxtaposes revival and reform in Chapter 1, with one profile facing towards the past and tradition and another profile facing towards the future and change.

The ideology, institutions, and identity of a rigid and unchanging religious tradition are perfectly aligned to continue to obtain the social results that it has been getting--effective or ineffective, good or bad, lively or dying, growing or declining, salvific or demonic- and the adaptive challenge for any religious leader and group that proposes responses to rapid social change is creativity, effectiveness, and success in creating a new identity through modes of thought and behaviour evident in a community, individuals, and the literature, ideology, religious institutions, monuments, and leaders. 'The form and function of transmission of religious traditions and the identity of those authorized to transmit and receive it are key elements in the analysis of the process. Such adaptation is not a single event or set of events, but rather a constant ongoing temporal and social process-in the case of Swaminarayan Hinduism, extending over two centuries.

Following Swaminarayan's death in 1830, the group continued to grow, and new institutions developed to interpret his teachings and practices and to oversee the expansion of Swaminarayan Hinduism. Sahajanand Swami was celibate with no heirs, so he brought two nephews from his home area near Ayodhya and established them as authorities in two major temples and dioceses: Vadtal in the south and Ahmedabad in the north. Descendants from the family of Swarninarayan continue to serve as acharyas in the two dioceses of Ahmedabad and Vadtal and administer the growth of the oldest branch of Swaminarayan Hinduism in India and abroad. Koshalendraprasad Pande is the Acharya of the Ahmedabad Gadi (initiated as acharya in 2004), and his father, Tejendraprasad Pande is Mota (retired) Acharya. Rakeshprasad Pande is Acharya of the Vadtal Gadi (initiated as acharya in 2003). 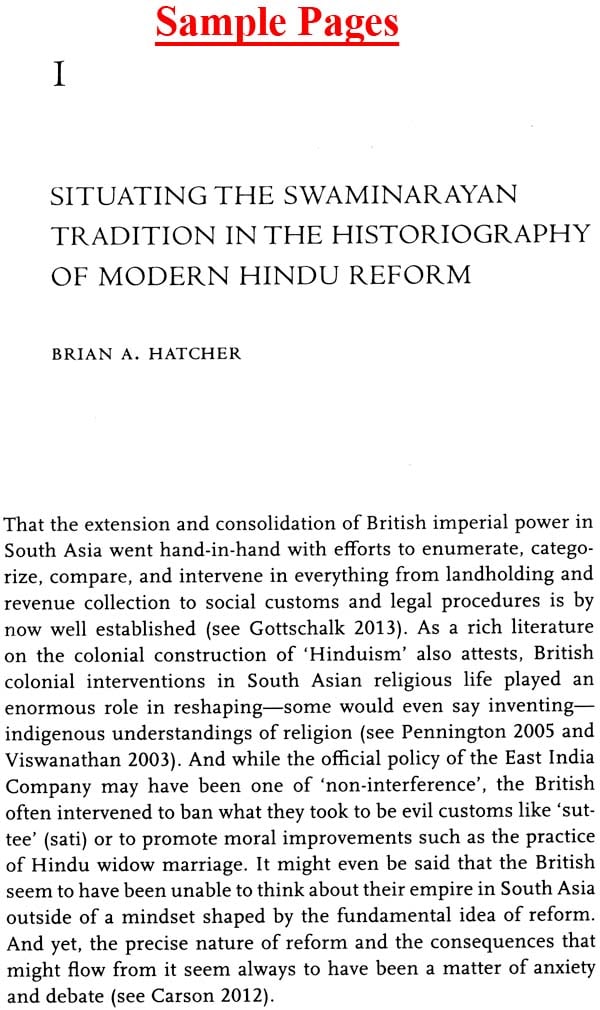 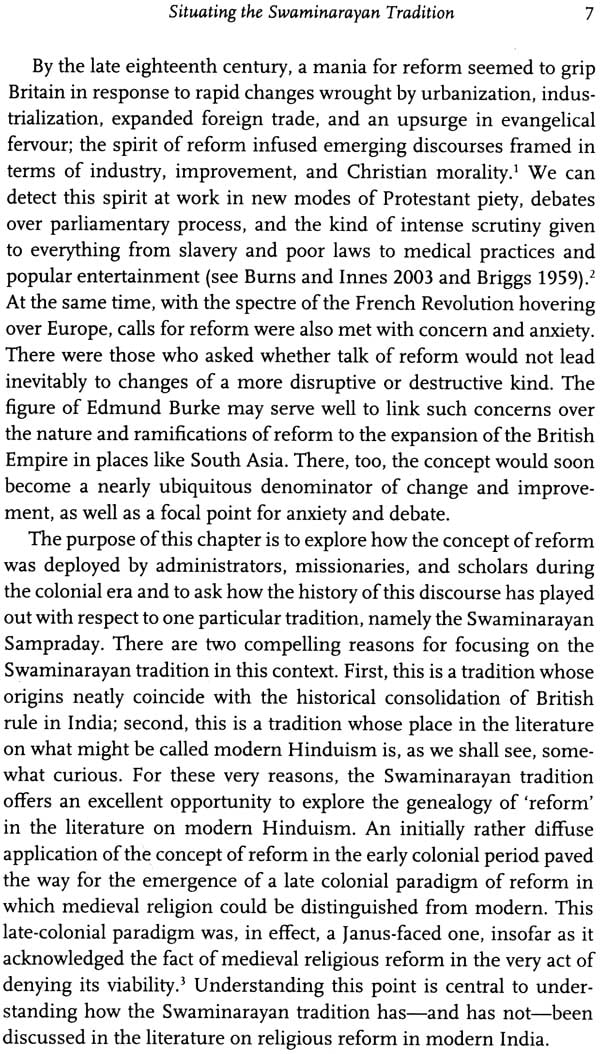 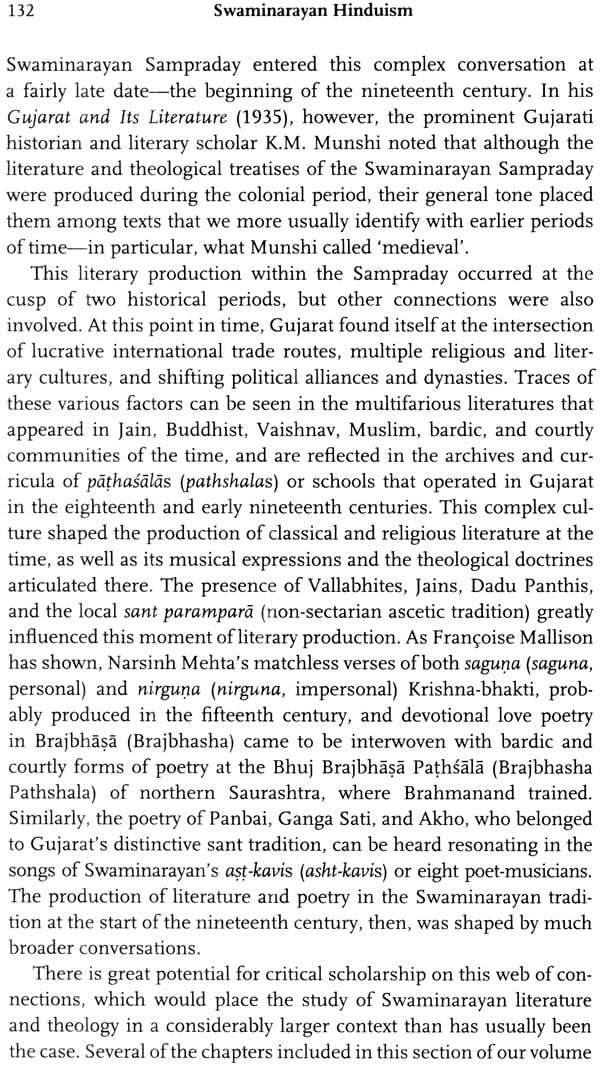 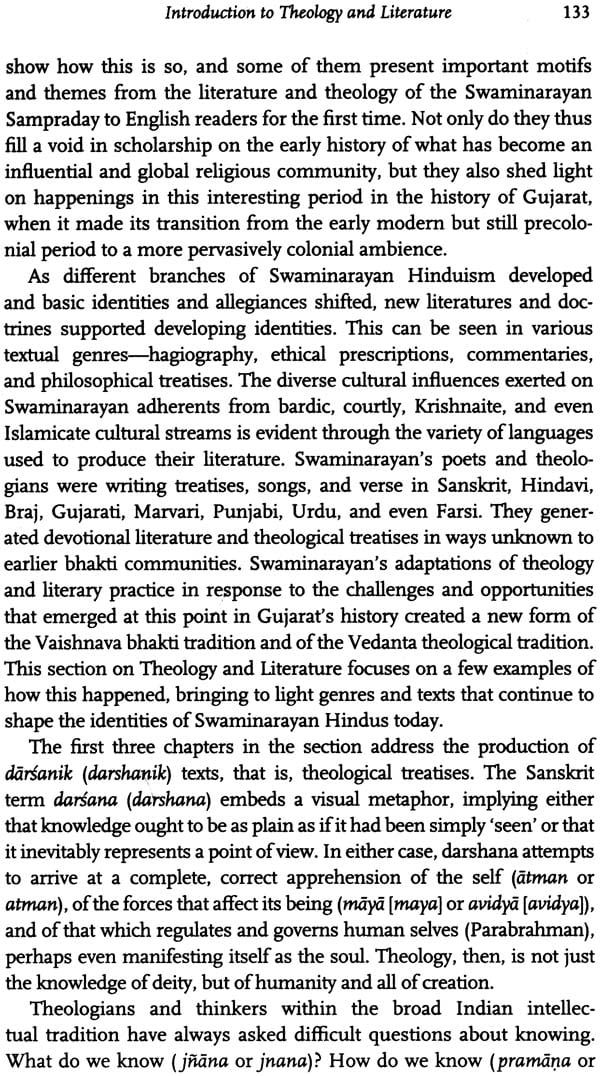 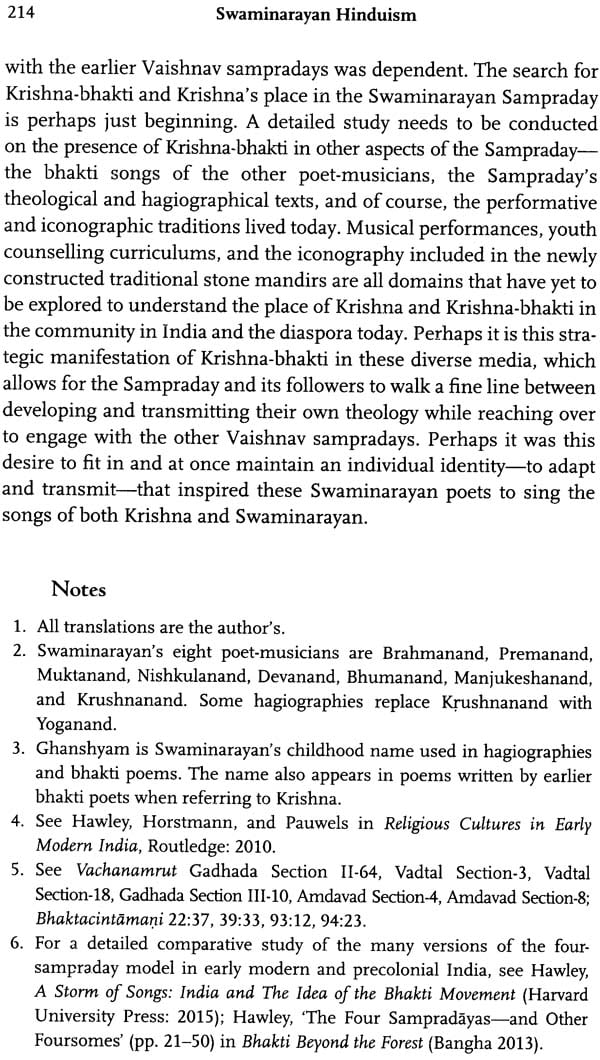 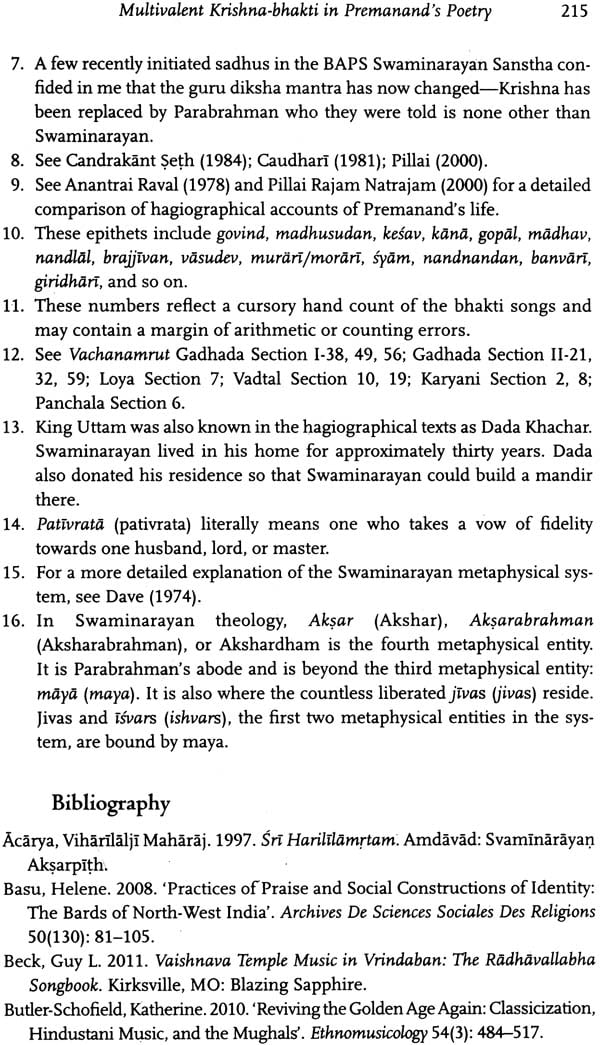 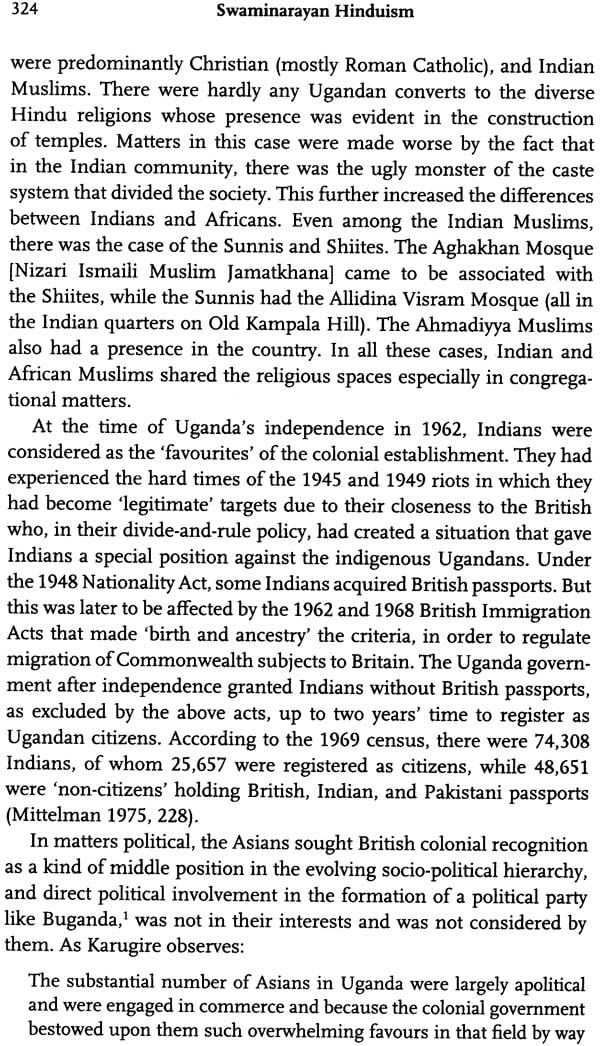 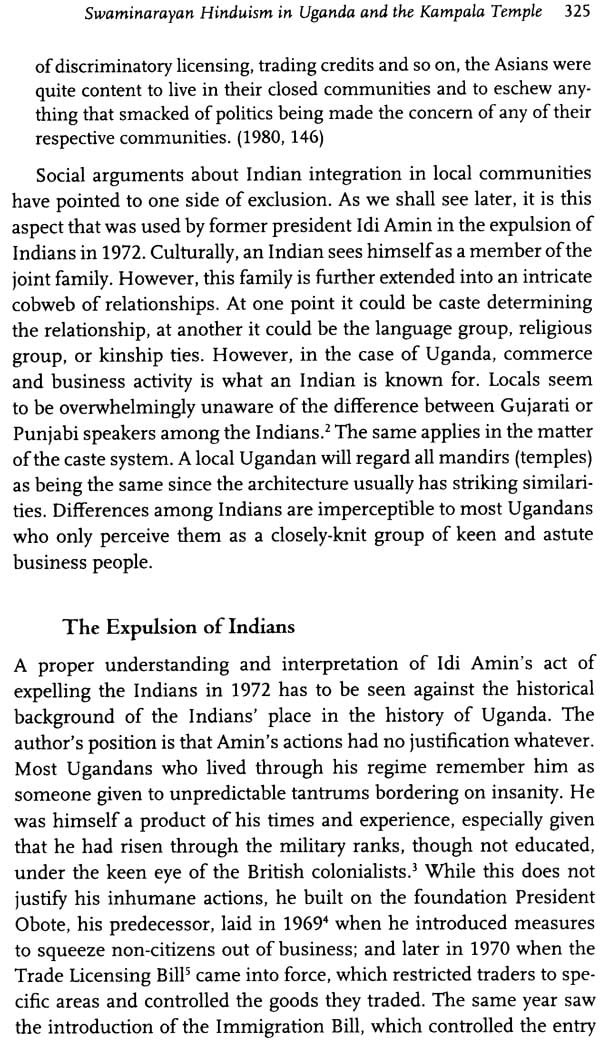 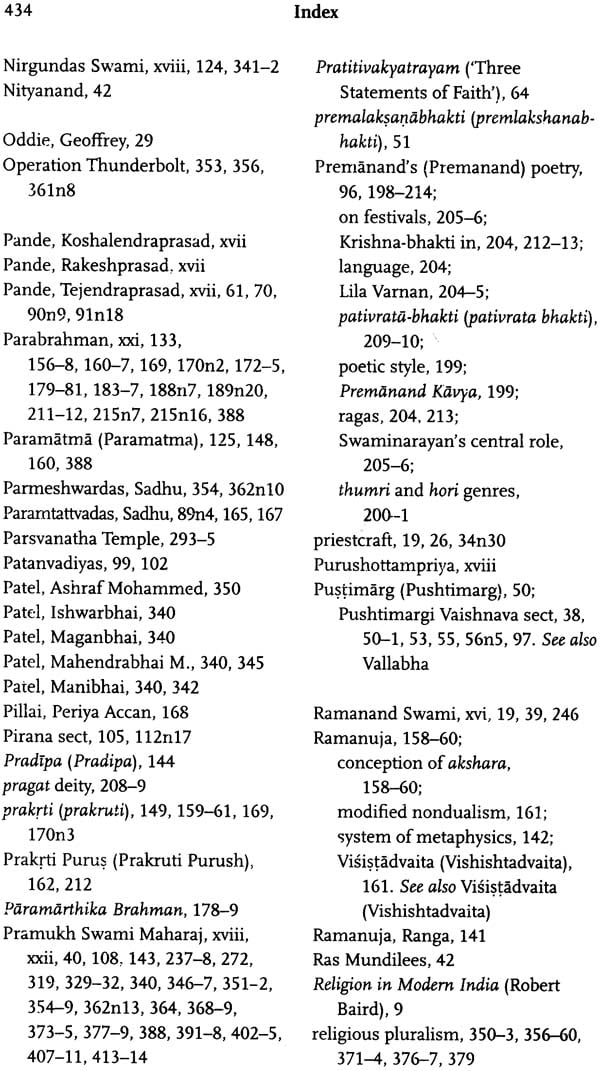 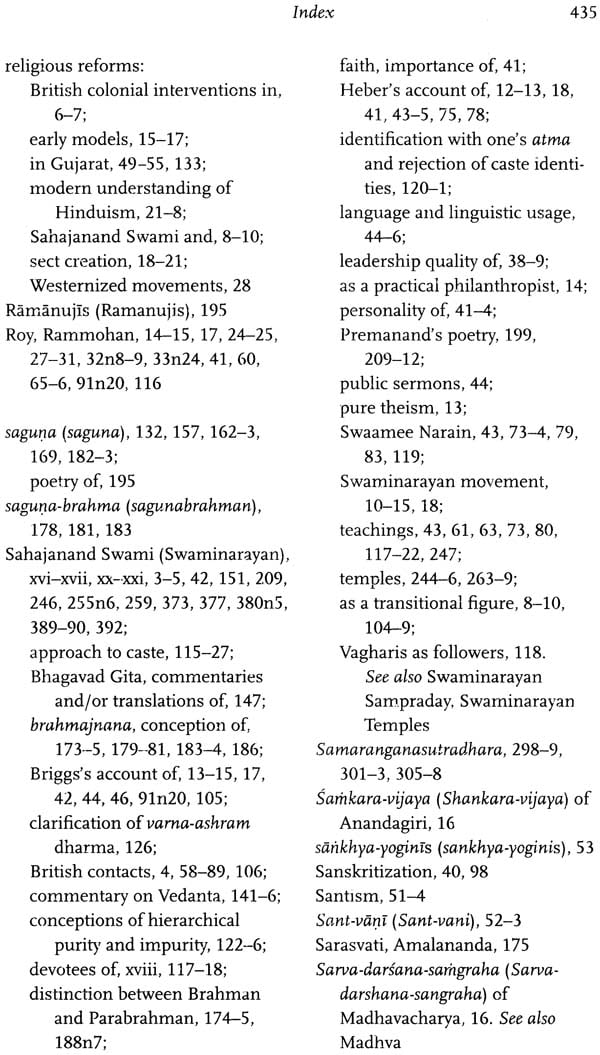 Impressions (Incidents From The Life Of Bhagwan Swaminarayan: Part 1)
By Sadhu Vivekjivandas
$17.60
FREE Delivery
$22  (20% off) Karma and Reincarnation in Hinduism
By Sadhu Mukundcharandas
$22
FREE Delivery