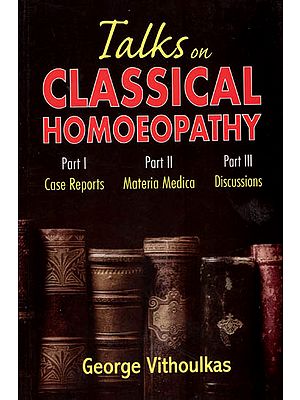 Talks on Classical Homoeopathy has been compiled from materials of transcript of the recording of the Esalen Homeopathic Conference held in California, USA, 1980. This book is written in a conversation style and alienated into three parts.

This section presents 33 carefully selected clinical conditions (cases) for discussion - out of collection of 60,000 cases. Each chapter has been devoted to particular remedy and theme of the remedy on which prescription is based.

Contains Materia Medica as the major subject. Twenty Se the well known remedies and their essential symptomatology is given which has been verified and identified as what the author calls ‘essence of are remedy’. This part also contains a number of digressions that have been left in the text to enlighten the scholars.

Different subjects on homeopathy have been covered under this section. The last chapter has a question answer session on miscellaneous topics which answers many queries which practitioners face while in practice. This part also has glimpse from George Vithoulkas' life from the period when he was first introduced to homeopathy.

George Vithoulkas was born in 1932 and lives on the island of Alonissos, Greece. He was an engineer by profession and was introduced to homeopathy accidently when he got hold of a book in a pharmacy. It was in 1960 in South Africa that he began his homeopathic Studies and these were then continued in India. He studied homeopathy exclusively and then got in to practice and later also started teaching. Since 1967, he has been teaching classical homeopathy. In 1994, he opened the now world-famous International Academy for Classical Homeopathy on the Greek island of Alonissos. He was awarded the Alternative Nobel Prize in 1996. George has written books for both the layperson ail the homeopathic practitioner. George's clear presentation and penetrating studies are a landmark in the world of homeopathy.

In course of these "TALKS", GEORGE VITHOULKAS has revealed that the thirty three clinical conditions (cases) for presentation and discussion were selected out of his collection of 60,000 cases. A chapter each is devoted for this purpose, wherein heading mentions the remedy (or remedies) and the clinical condition, for which the prescription was filled, followed by the "postmortem" of the prescription by the learned delegates on "invitation" to do so by the speaker while he is recalling what reasons justified the choice. They were not just to listen passively but "think, think and think" as elsewhere he has pleaded.

Page numbers that follow the "symptomatology" Quotes and for the rubrics are of "Kents" Lectures on Homoeopathic Materia " and his " Repertory of the Homeopathic Remedies" respectively - without which no serious study of Homoeopathy is possible, and which every professional possesses. For at that time (1980), H. Barthel’s "Synthetic Repertory" was not yet published.

From the latter, the chapter: "Remedies and their abbreviations," being the latest internationally accessible list of remedies, has been used for the spellings of the homeopathic remedies. For brevity, only, these abbreviations have been used wherever their names occur or are mentioned in the text, except in the headings where their full names are also given.

Of the 123 remedies mentioned in the index, it will be noticed that detailed attention has been received by forty two only with most of which every professional is acquainted. A closer scrutiny will reveal the enormous amount of " dissecting the great master subjects the symptomatology of each remedy while " matching with the symptoms of the individual.

"Editing" has been scrupulously limited to the mininum, intentionally. Had the author, time and inclination, to undertake its editing, the text would have no doubt been more polished and spruced, but would have lost the vivacity and native humour that glistens in the "raw" transcripts !

It is expected that the scholars and the admirers will appreciate and enjoy this opportunity to VIEW the working of the great healing artist at work!

This part consists of 33 Chapters of various cases chosen from his vast repertoire (of 60,000), by GEORGE VITHOULKAS especially for presentation at the Esalen conference. Addressing and inviting the learned audience for active participation, he says "What I want to transmit to you is not the case, it is the way of thinking." Every chapter is an example of some aspect of that object. A few of these cases are presented in parts, some incomplete but the theme and object is one and the same : to stimulate thinking in a practitioner when confronting with a patient.Suggestions for remedies from the audience are called forth, who in turn analyse and/or repertorise and put forward their prescription, with arguments in favour of their choice, whenever the speaker asks for it.

Wherever in course of these talks, GEORGE VITHOULKAS has pronounced a "dictum" or "teaching" from his experience relevant to the solution of a problem and worthy of attention, it has been highlighted either in italics or bold face.

Great care has been taken to leave the expressions "untouched", lest their sparkle be lost and the raw material which a scholar looks for be adulterated with the commonplace "editing"; for GEORGE VITHOULKAS is an original homoeopathic scientist full of convictions reinforced by vast experience of what he practices and teaches; though notall of what he says may be understood except by the very wise. Hence this precaution.

"There is no mechanical way in homoeopathy - none. There is just thinking, thinking, and thinking, all the time" he is heard saying.

Practitioners with lot of clinical experience would be delighted to read these similar to what happened in their own practice and similarities of handling. He says for instance, when faced with a patient fast progressing towards a collapse "You are allowed to change 10 remedies within 3 hours in very severe cases, where the life is threatened, to save the patient. So what does it matter which acted". So practical he is.

He has been accused of being fanatic or crazy. That it is unfair and unkind would be clear from his remarks/advice. "You give him (a pneumonia patient) the remedy and within 24 hours, there has been no change at all, it is better that he be given antibiotics." A fanatic would never have said that !

In the conversational style that these talks have been delivered, there are bound to be some digressions arising out of the questions from the audience not pertinent to the case. They have been allowed to stay in smaller print (8 pt. preferably), wherever they occur, instead of assigning them a separate place or chapter, lest their contextual worth be reduced !

On the whole, an attempt has been made to limit the "editing" to the minimum.

It is hoped that a perusal of these cases would give a seasoned practitioner a consolation for what he might be regretting as mistakes in his practice and find condoned here in; the tyro, a boost to his confidence, and fuel to his enthusiasm.

It is well known that homoeopathic medicines are all specific — a definite agent with a definite purpose with power only for the fulfillment of its attainable object. This specificity has been variously sought and called "totality", "individuality", "picture" and so on. G. Vithoulkas calls this the "Essence" o fa remedy —the most significant part of its pathogenesis and essence. Only last year was published his "Essence of Materia Medica" [B. Jain’s Catalogue Book Code No. B-2546]. This contained such specific characteristics, which every practitioner needs to visualize or to recall the "image", of fifty two remedies whose symptomatology is recorded in the various materia medicas.

Mostof the readers would already be acquainted with the "Key-notes" of H.C. Allen, "Leaders’’ of E.B. Nash and "Drug Pictures" of M.L. Tyler, to name some, whose common object appears to have been "to aid the student to master that which is guiding and characteristic in the individuality of each remedy —a symptom around which the rest of the symptomatology can be arranged for use, readily and efficiently". In this volume, G. Vithoulkas, in course of his "Conversations" at ESALEN with the active participation of the learned delegates, has "built up" a similar "aid" which he felt was necessary, probably after his sad experience with the Indian homoeopaths about whom he laments, "when it came to prescribing (they) could not put the information (about the pathogenesis of the remedies) which they had in their mind (memories) into practice". He hopes that after one has gone through what has been presented here, one can plunge into the vast symptomatology profitably.

The twenty seven chapters that comprise this part treat over thirty two remedies or so to this process and illustrate his method. Of these thirteen chapters (Chapters 11, 13-18, 20-21 and 24-27) deal with remedies which are also depicted in the book mentioned above.

Just as Kent based his Lectures on Symptom lists in Hering’s work (mainly the condensed book), G. Vithoulkas has his "sight" on Kent’s works. In his valedictory remarks he observes humbly that "knowing that book by heart would be three times as good as having me here". It is left for the readers to judge.

This part also contains a number of digressions that have been left in the text, for the enlightenment of the scholars. They are unavoidable in such "conversations" — and "spice" the subject matter.

The ten chapters that follow are talks in the same vein — "conversational style", so to say — on various subjects. In-fact, the last happens to be a reproduction of a question and answer session on miscellaneous topics that might have cropped up extempore. The learned author in his answers has displayed therein his sparkling opinions backed by his vast experience in the modern clinic, that then boasted of a repertoire of 60,000 cases !

Incidentally Chapter 8 happens to give some glimpses into his early life, till the time he started taking homoeopathic remedies for his own ailments.

Sub-titling has been purposely avoided lest it distract or interfere in the "conversation".

Wherever a sentence(s) happened to highlight an important observation, it has'‘been italicised or bold typed in the print. 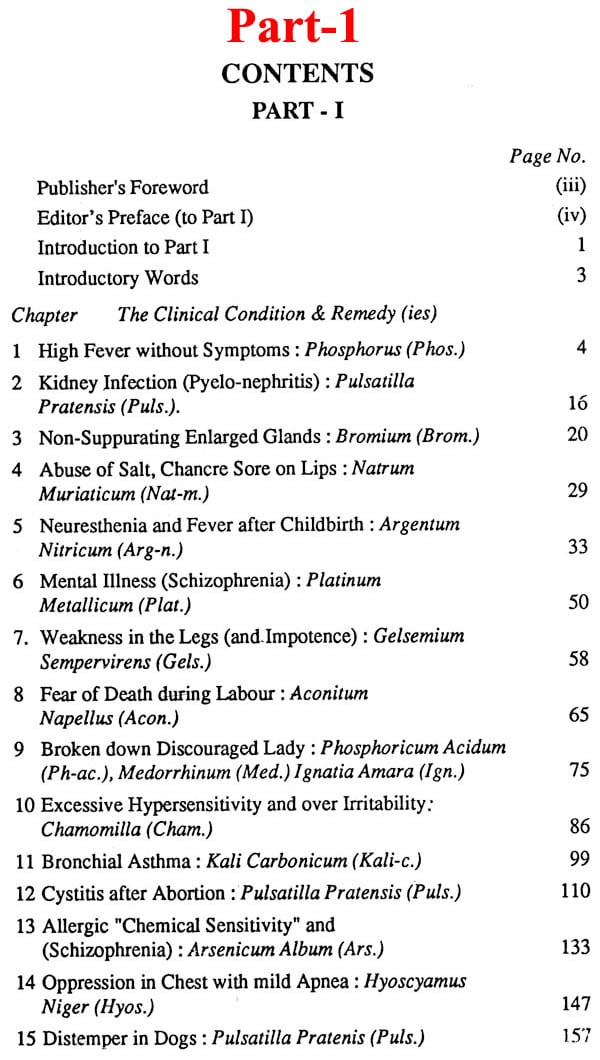 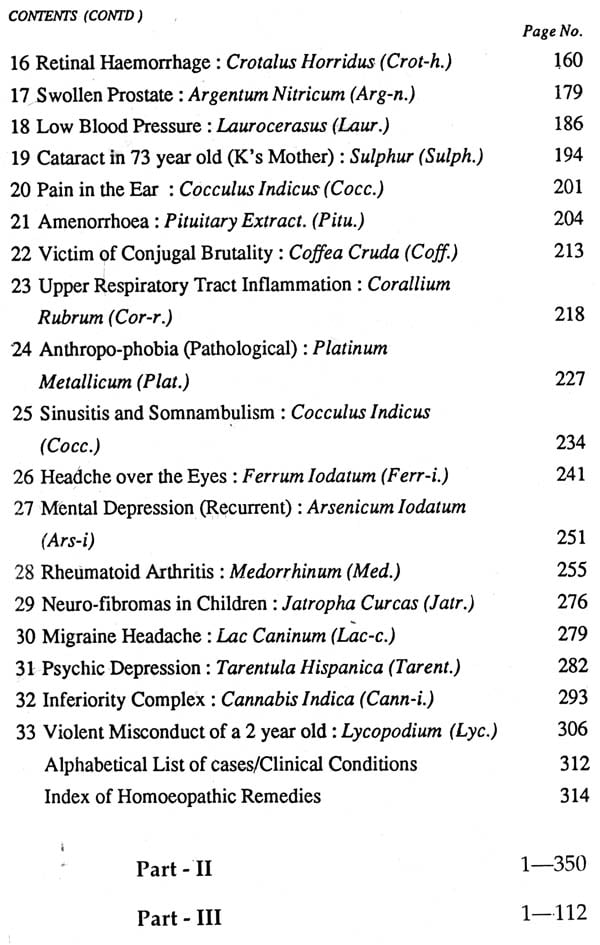 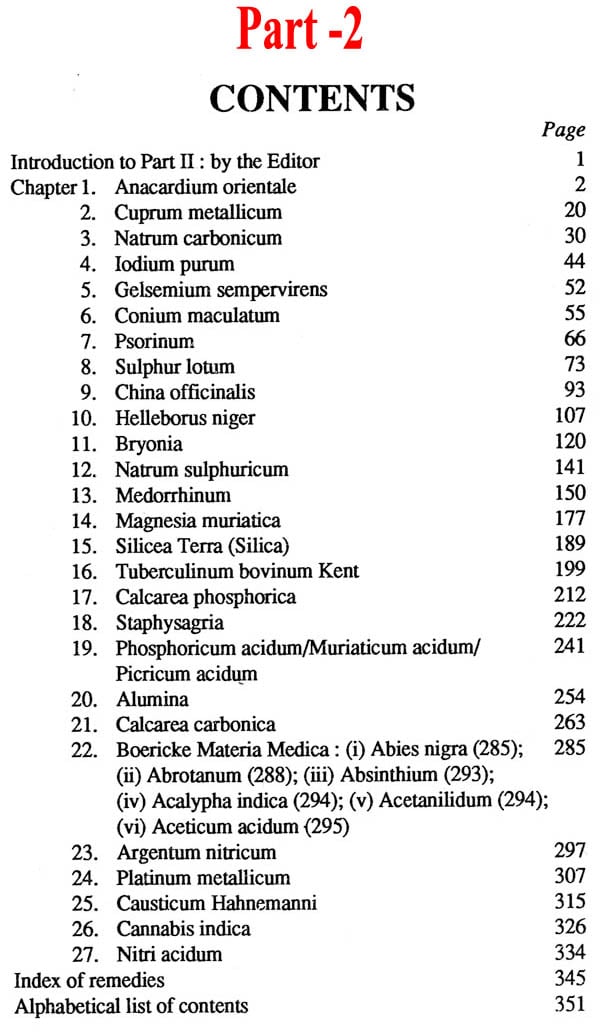 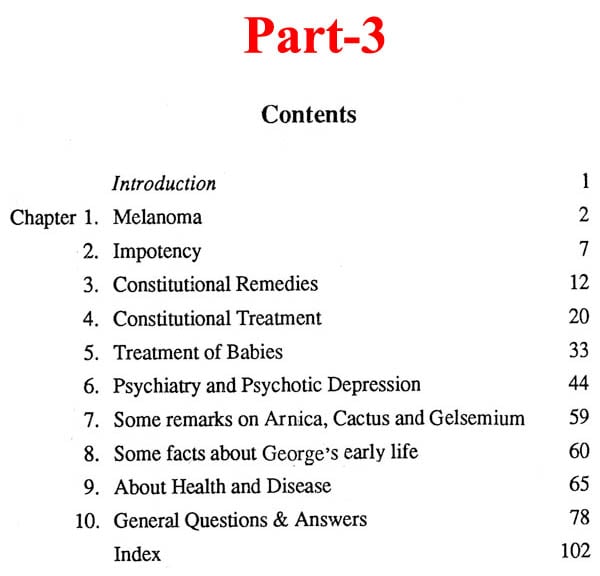 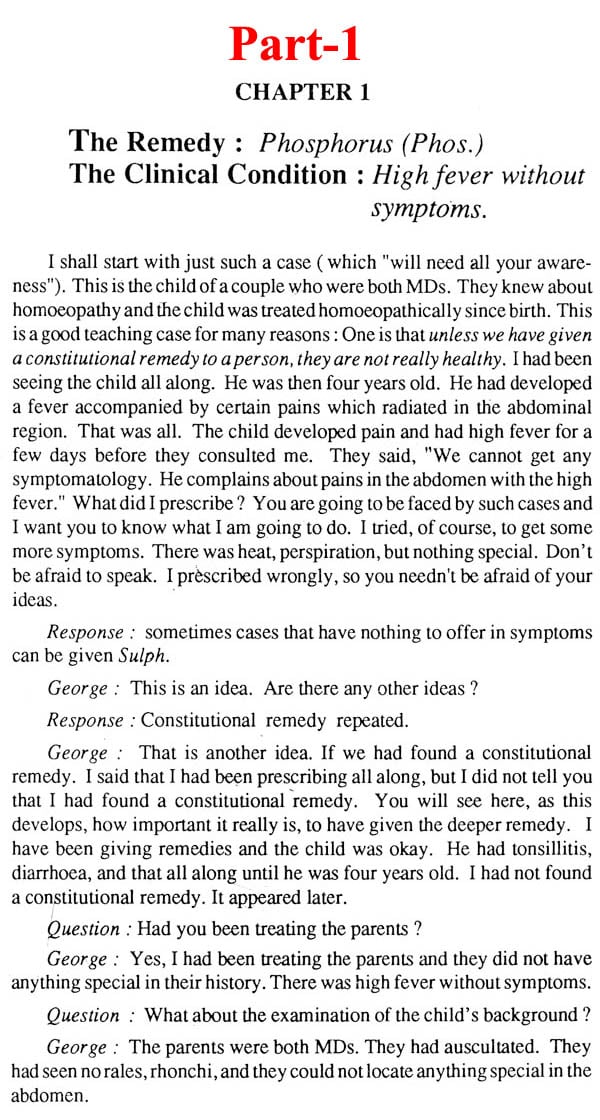 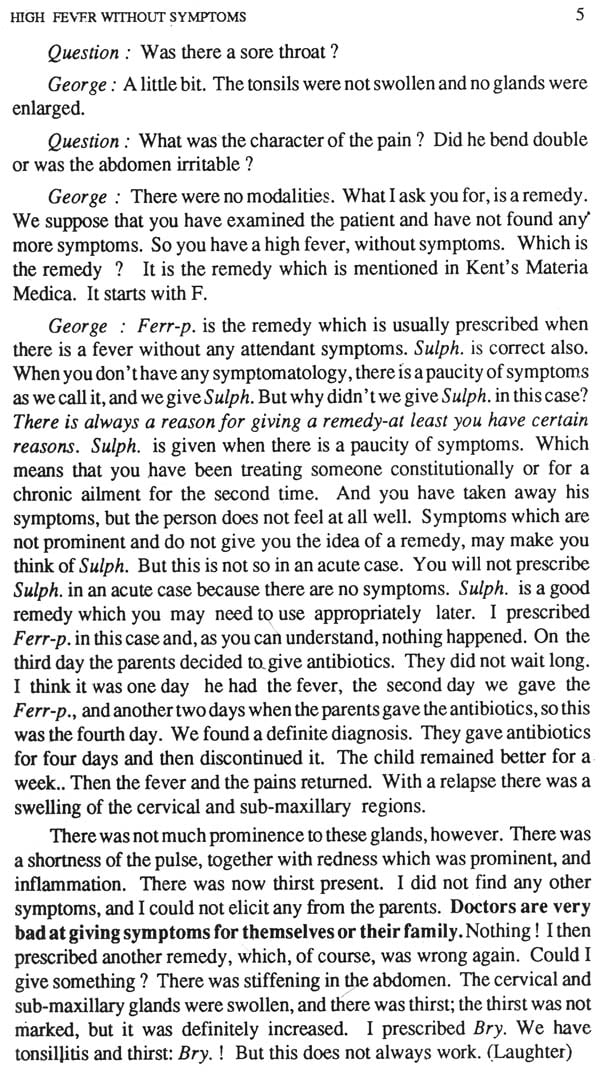 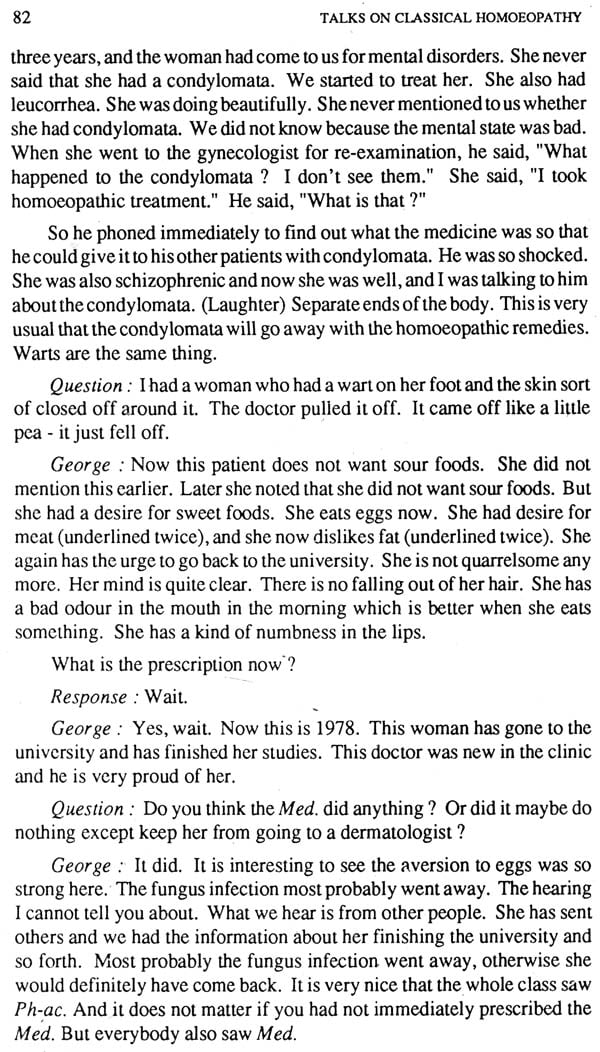 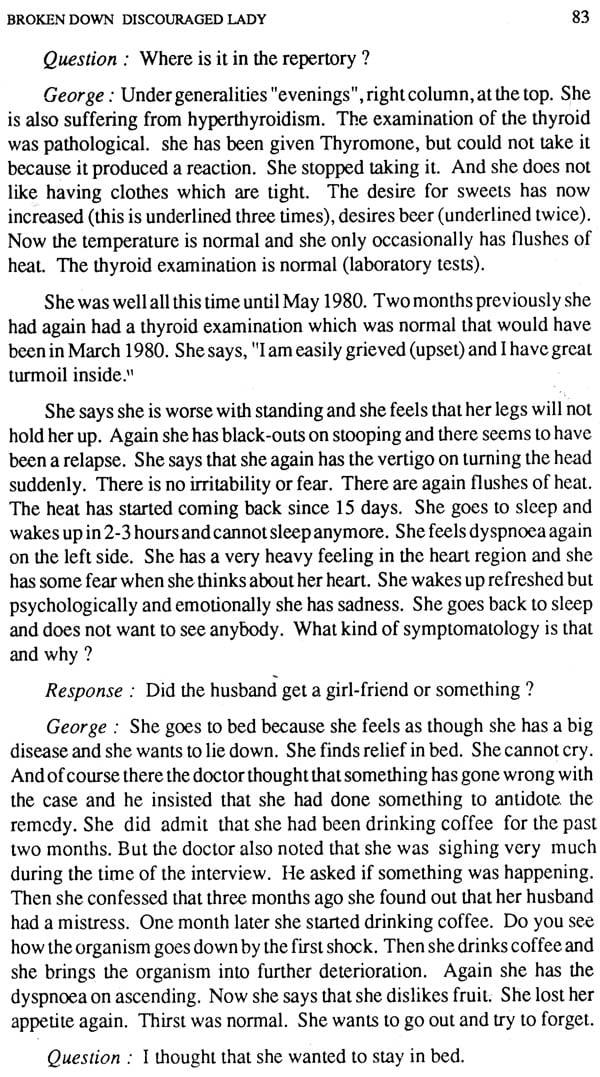 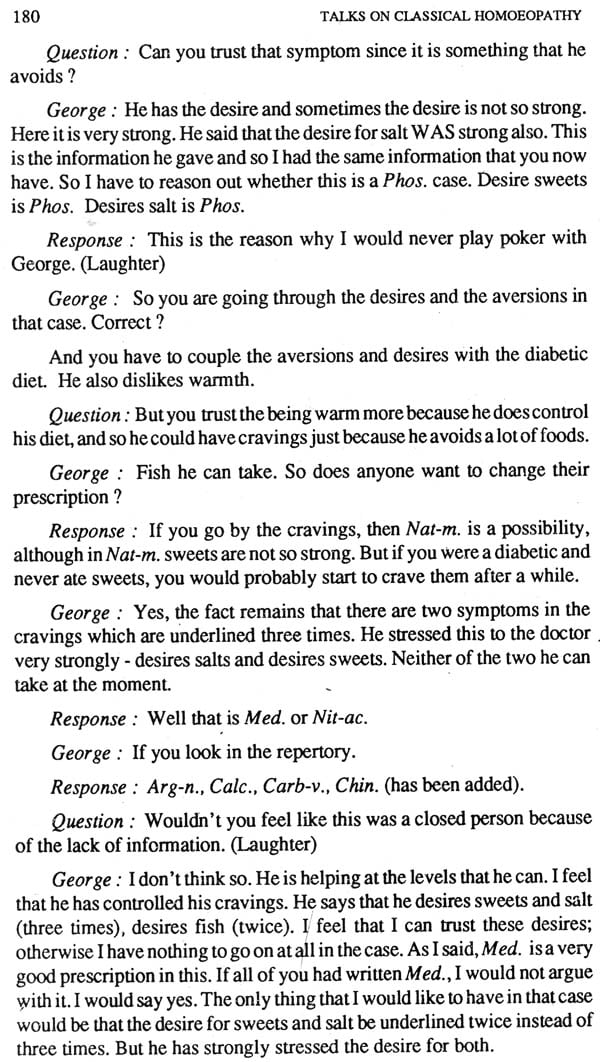 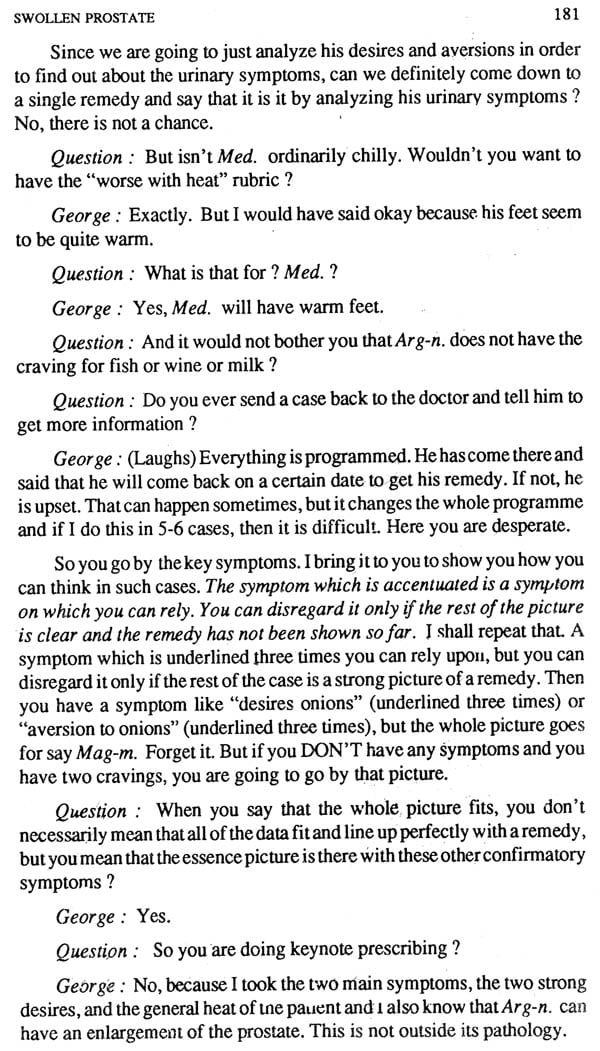 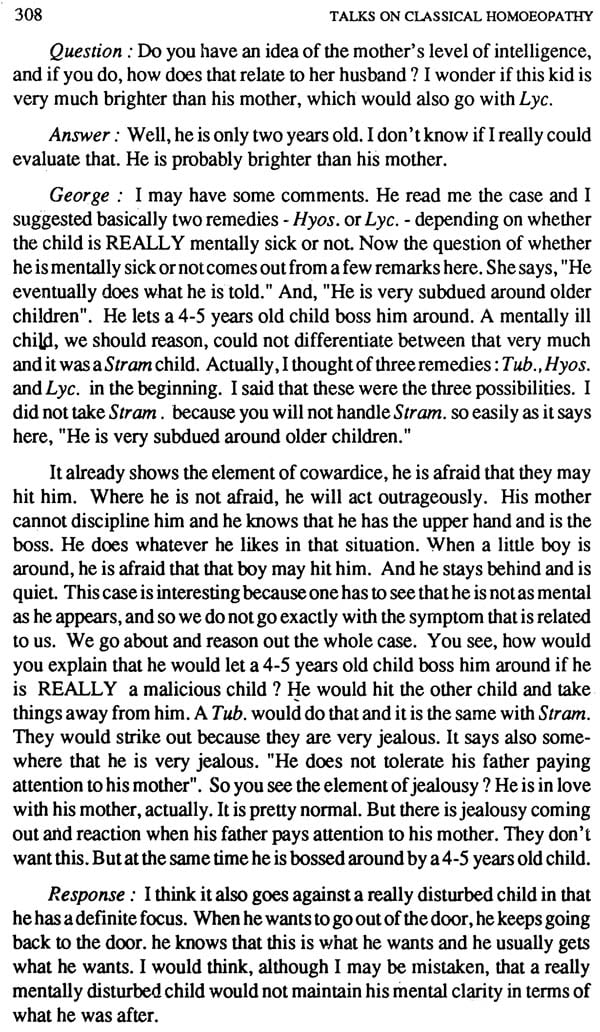 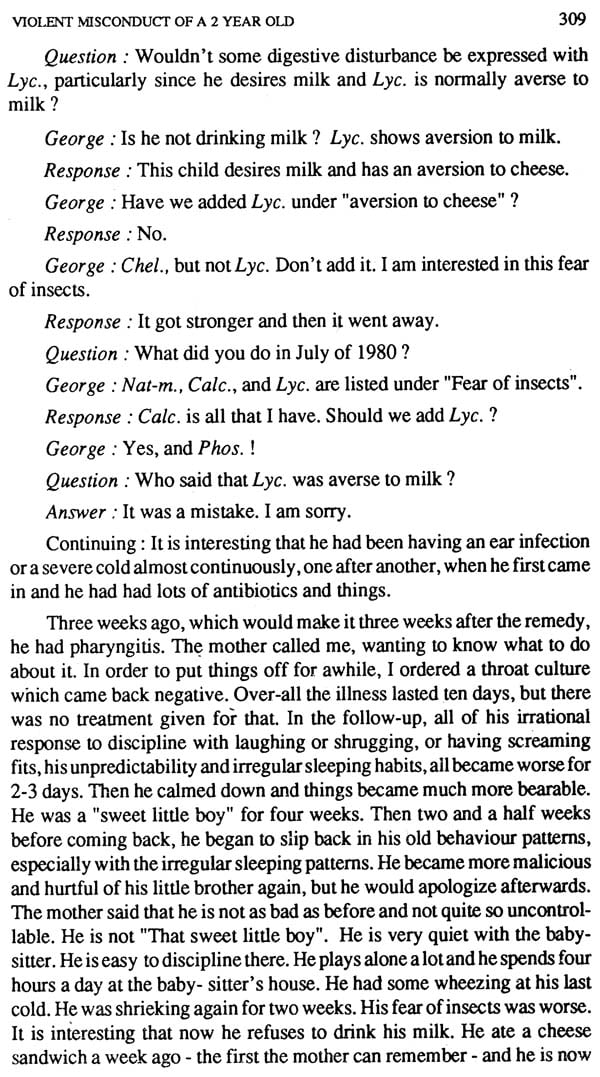 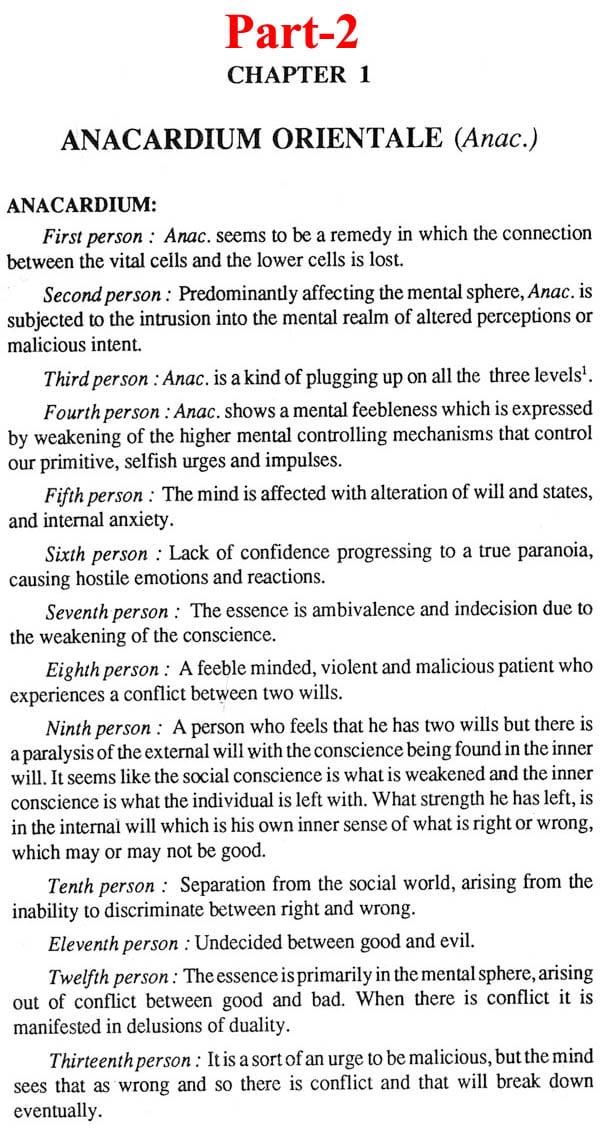 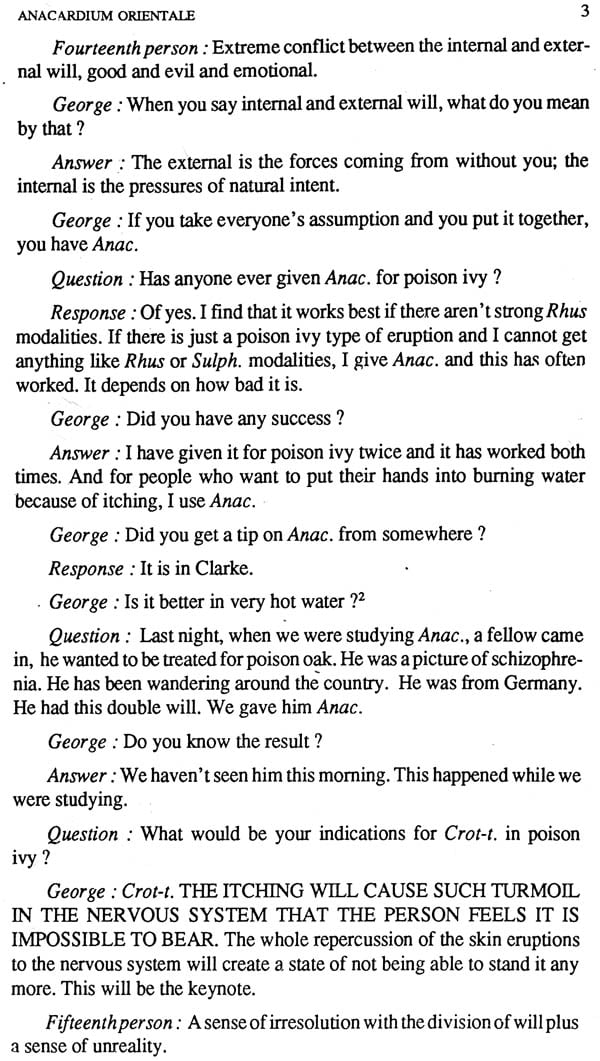 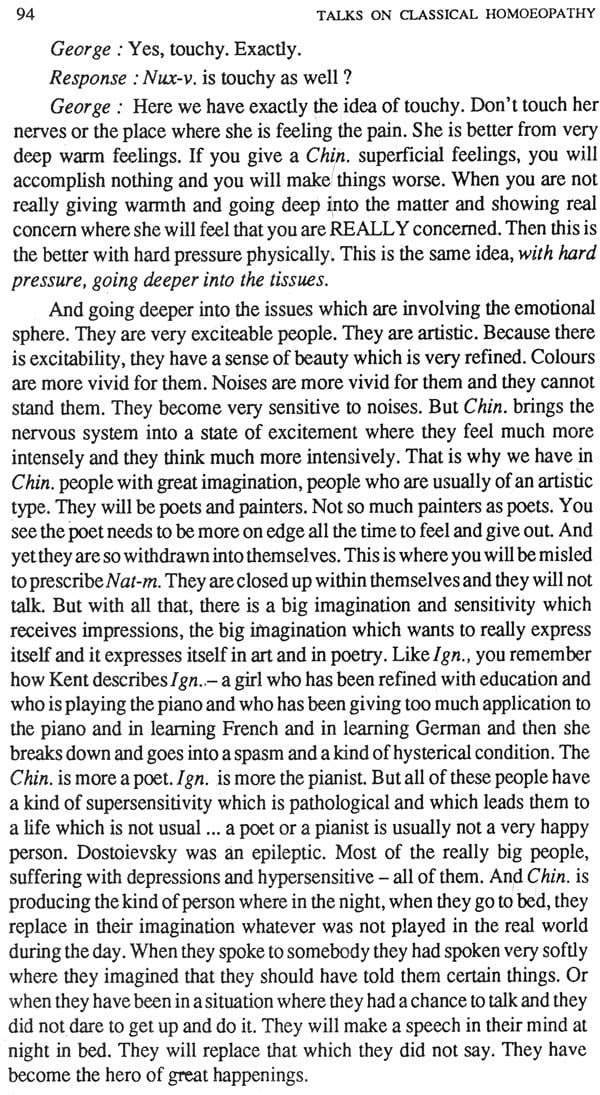 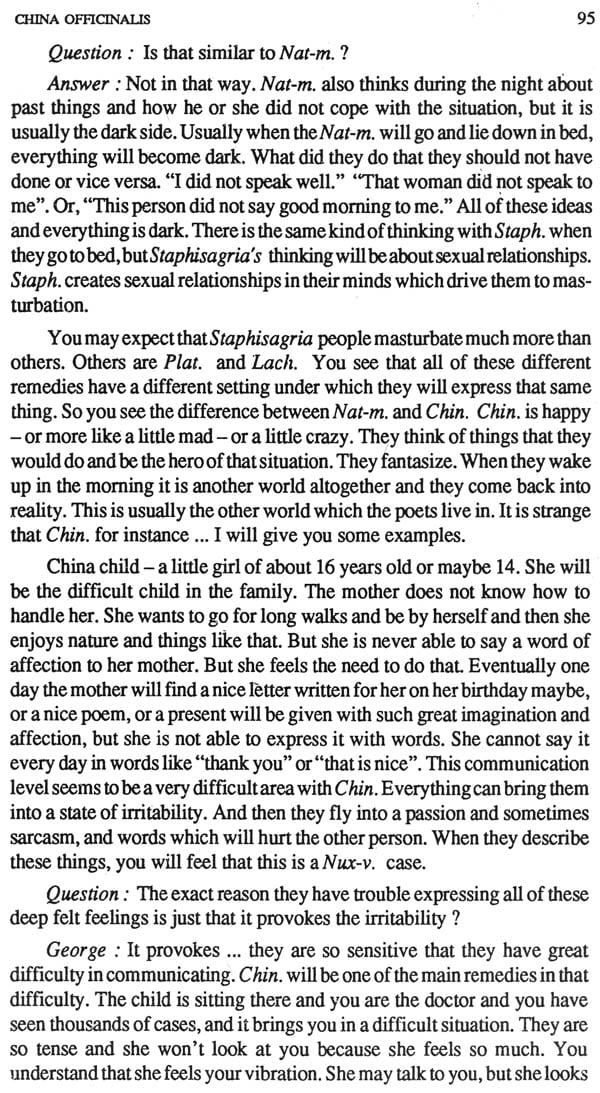 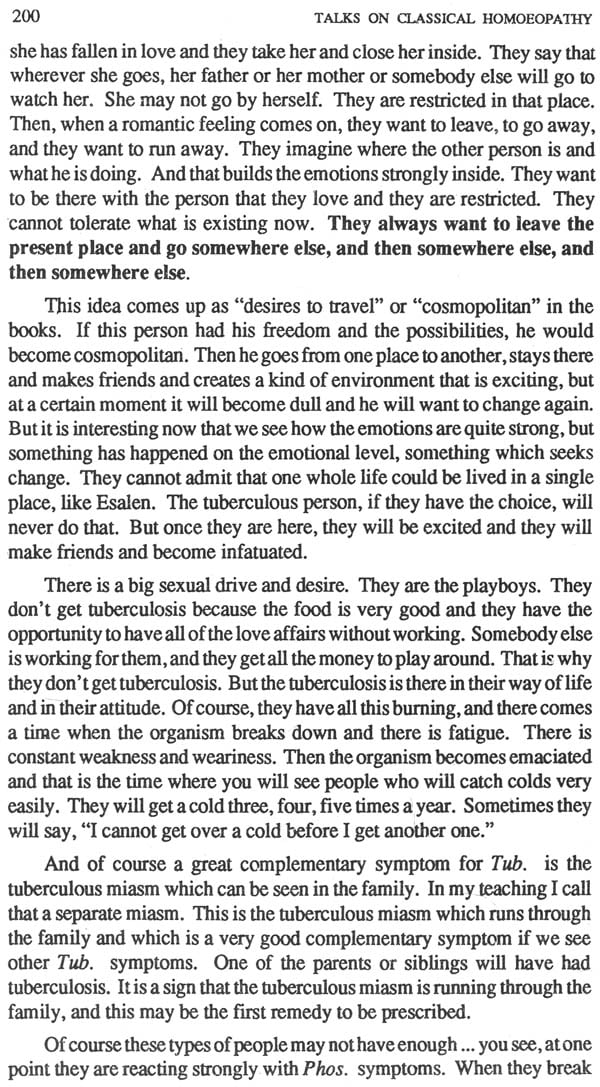 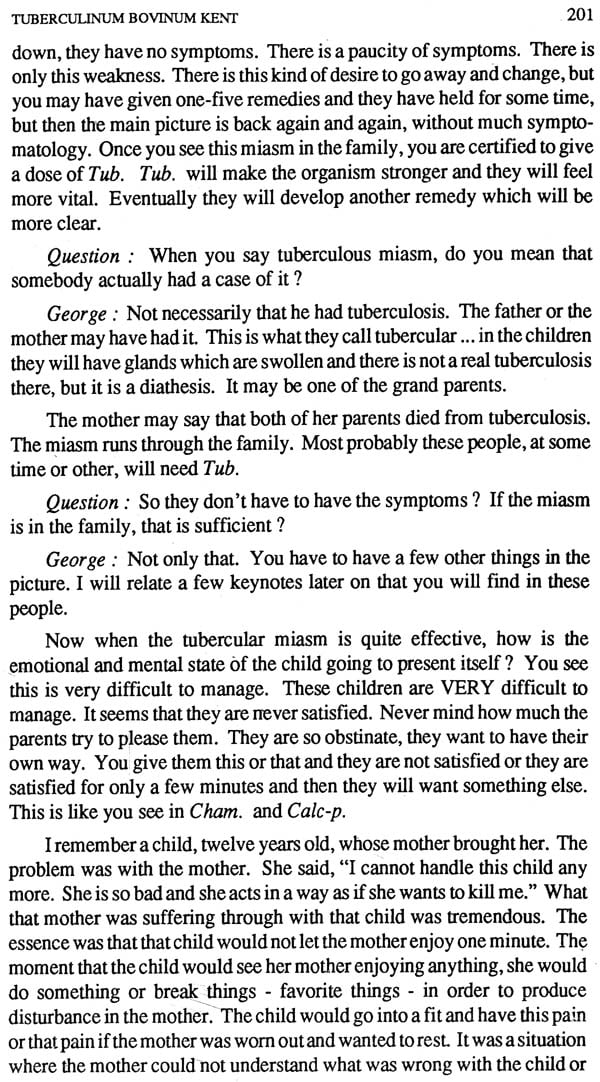 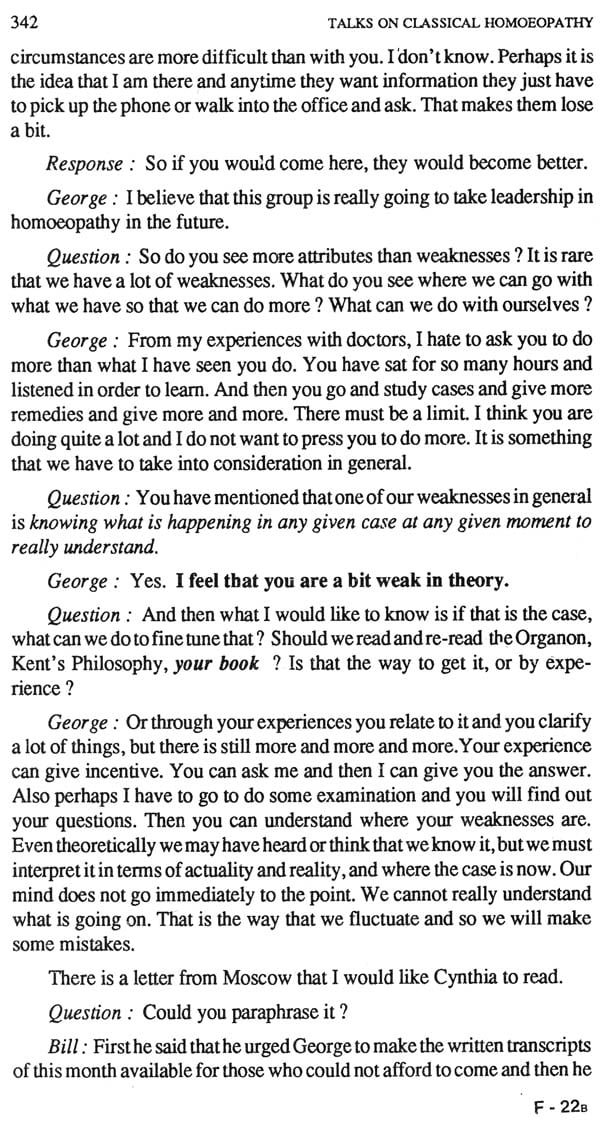 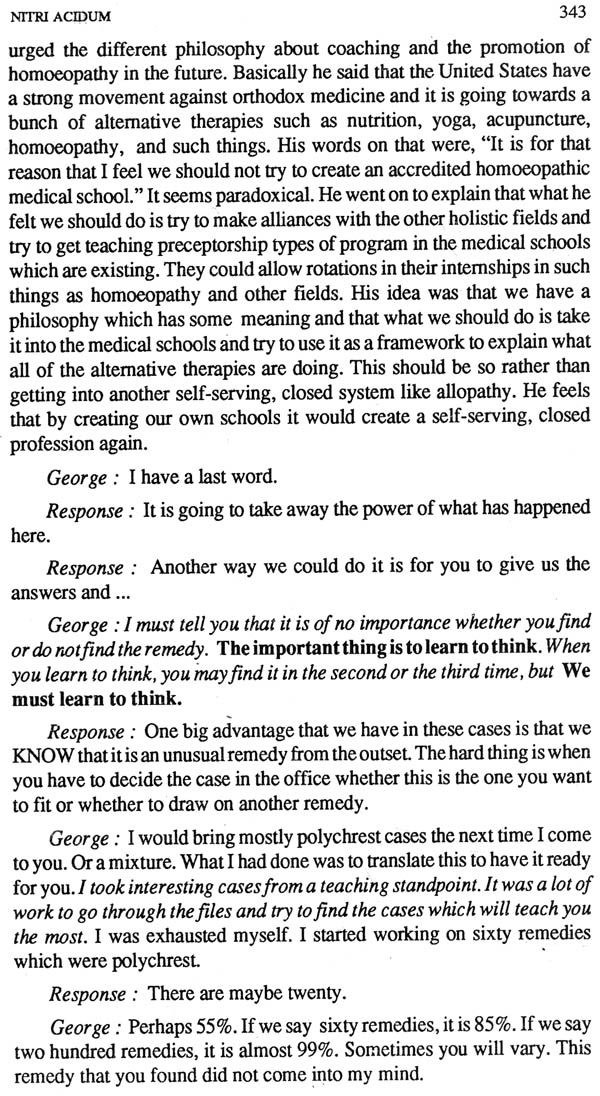 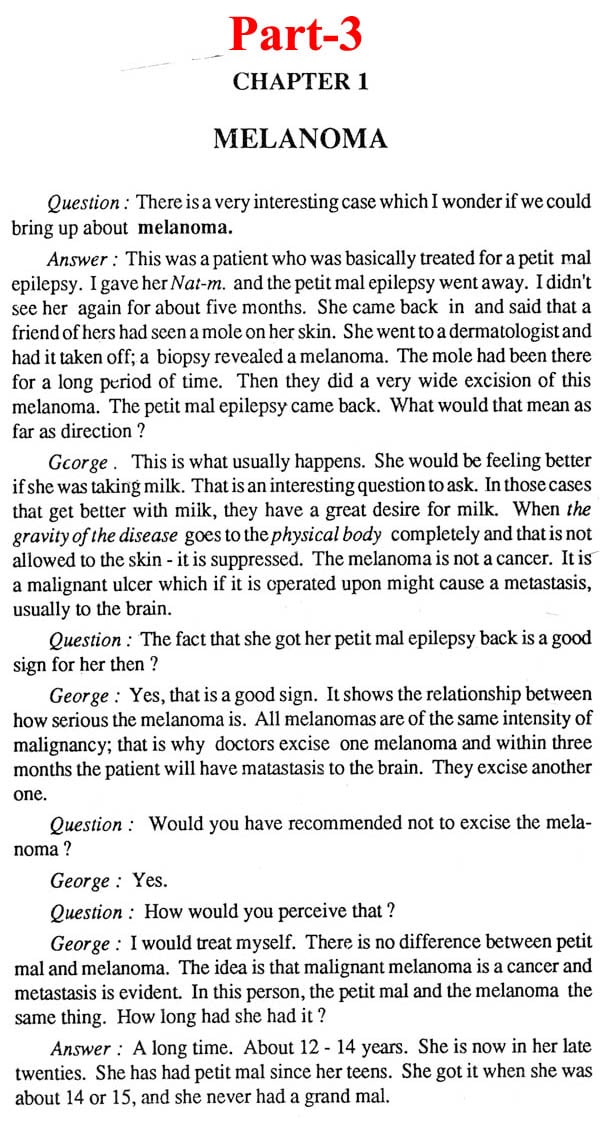 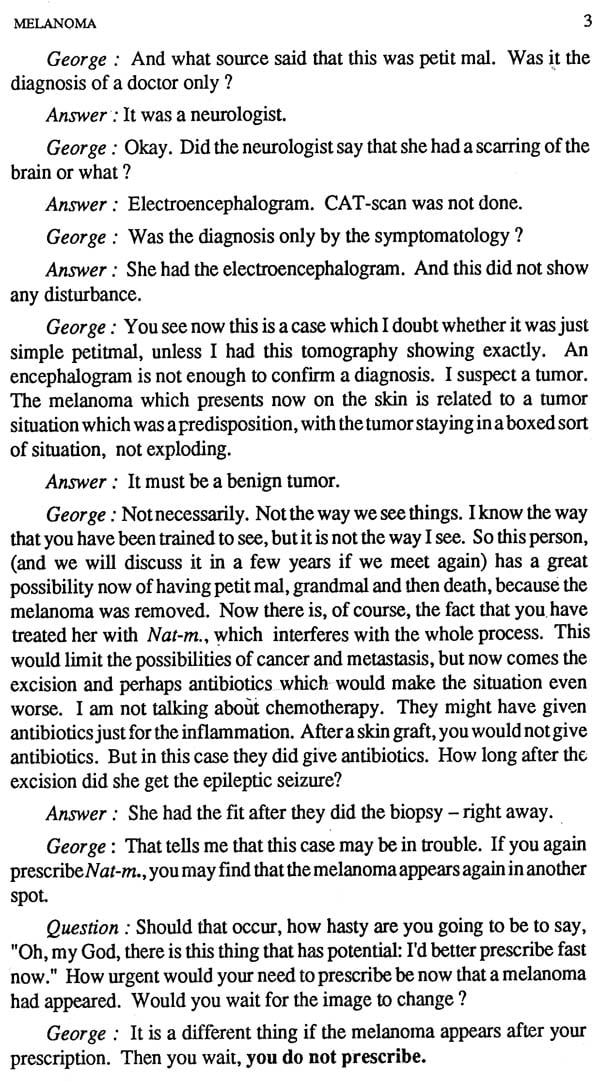 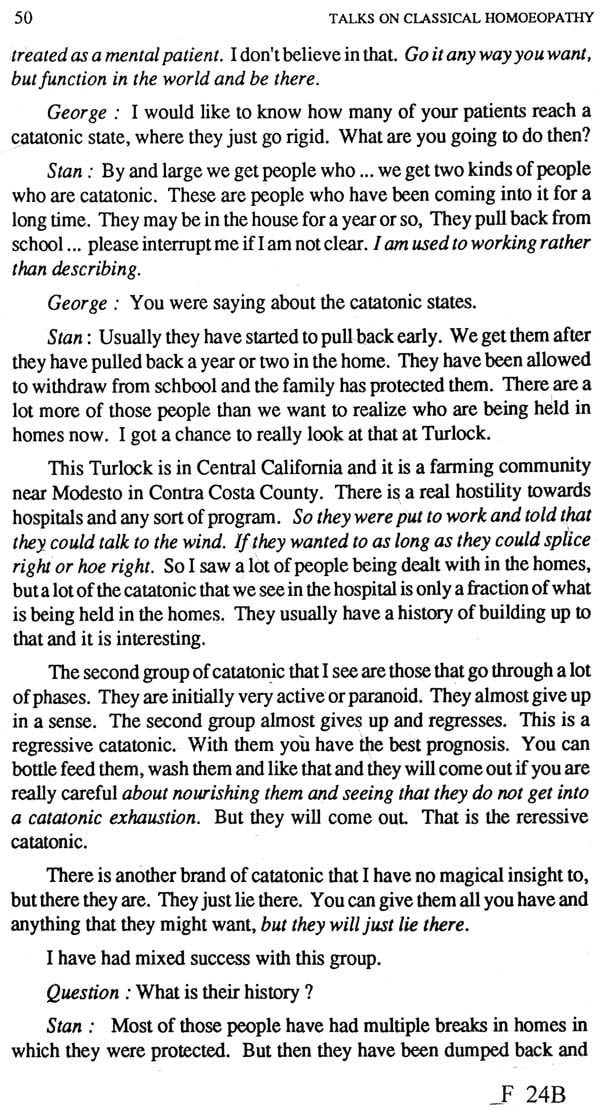 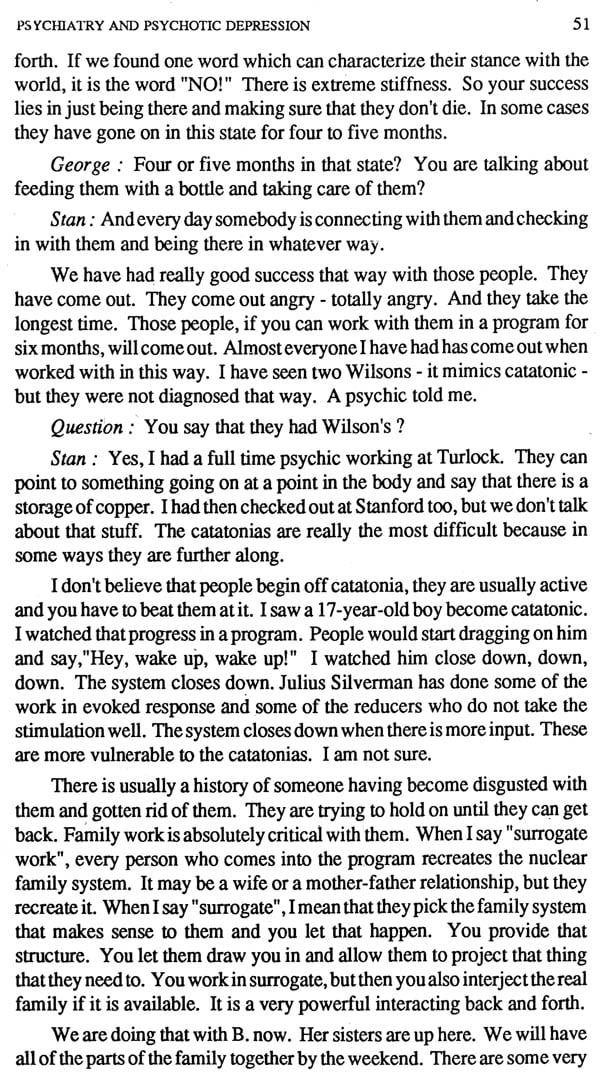 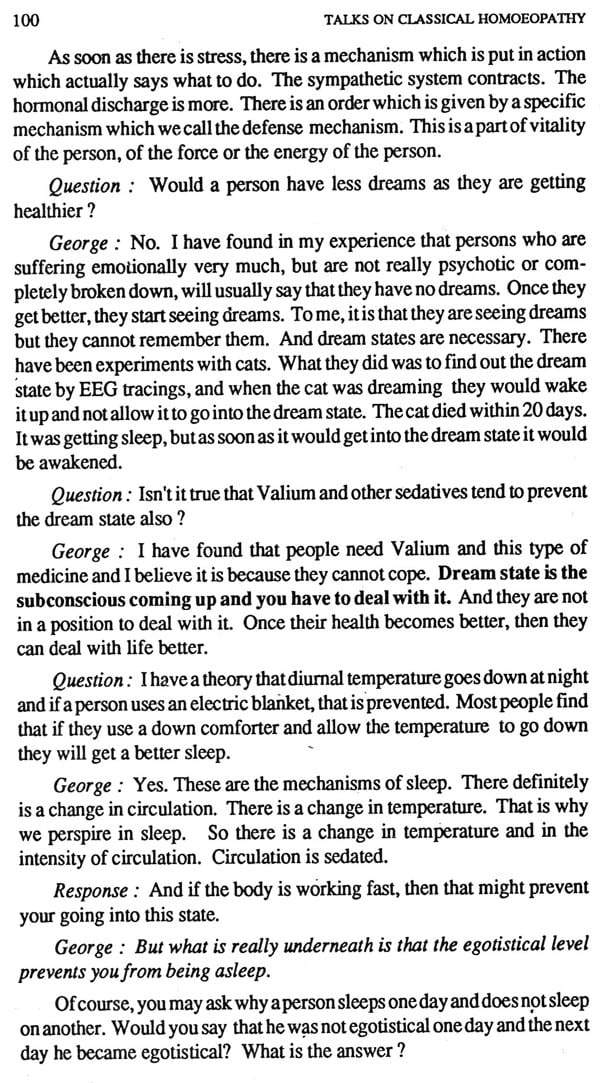 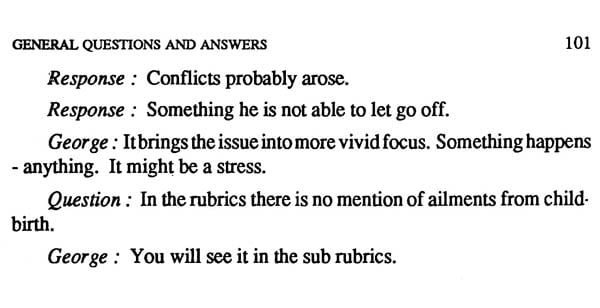