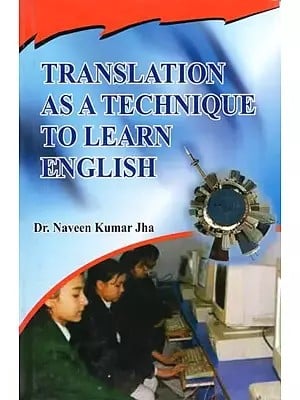 Translation As a Technique to Learn English

The book in your hand is an honest attempt to fulfill requirement of those students who are at the door of learning English with throbbing head and heart for the enigma woven round him about the language. During my teaching years I felt that they do not start language with correct approach say proper understanding of structures and their semantic significance. Second they hardly pay any attention one. The makes them unable to use words in their accurate structural frame work. No doubt, structures of particular language are meant for a kind of coherence between syntactic rules and their semantic implication. But this is not enough for a successful handling of a target language. Actually, they need a sense of language to make language functional along with the above mentioned facts.

Taking all these facts and substances in to account I have made the book entitled "Translation as a Technique to Learn English". The book has seventy four units further divided into sub-units within a certain chapter considering essentiality of discussion on the topic concerned. Each unit has some exercises to translate into English from Hindi and some revision items almost in all chapters to translate into Hindi from English. At last some sixty practice sets are made available to work out into Hindi and English each that students should feel more confident when they finish the book.

The book contains exercises and revision units on various topics and themes relating to day to day life say politics, economy, sports, entertainment, society, culture, education, current affairs so on and so forth. They have been written in many styles like formal, informal, colloquial, slang, dialogue, humourous, realistic, post modernistic so that students might be acquainted with various styles and use when they need. The approach of composition of the book has been analytical and descriptive to make the subject as easier as I could.

I express my heartfelt obligation to all my colleagues, friends and well-wishers for all their belief in my potency to make some creative works comprising this one. My family members, relatives, my villagers and students deserve special thanks for their righteous support till the end of this project. I think that whatever I write and in whatever manner is all due to my father. Dr. Krishan Kumar Jha, "Kamal', reader in philosophy, C. M. College, Darbhanga. I realize that I couldn't fulfill his dream, so I endeavor to make good for by different ways that could drench his thirsty soul. The more I imagine him, the more strongly and the more composed I emerge, I wait for your true and sincere suggestion.

Dr. Naveen Kumar Jha is a well-know academician and a reputed pedagogue. His book entitled "Criticism on Imitation, Creation, Allegory, Morality and Delight" has been lately acclaimed as an illustrative work on English literary criticism. Besides an author criticism, he has been a versatile poet writing in Maithili, Hindi and English. His Hindi short story entitled "Khuli Aankhein" containing seven short stories has already got its claim among Hindi readers especially at Janakpurdham, Nepal. His English poems have been published in several English journals His Maithili poems and essays have been widely published and read both at janakpurdham, Nepal and in India.

Being a prolific writer he has been subscribing with his English articles to many issues of English journals His School Essay Composition has been published by Himalayan Books Pvt. Ltd. Bag Bazar, Kathmandu. A few collections of poems are to be brought out very soon. A cassette of Maithili songs composed (music and lyrics) and sung by the author are to be released within few months His "Examination Digest to Compulsory English" for grade XI and first year L.A., L.Sc., 1.Com., I Ed came out in 2002 as a clinical investigation of examination phobia for the students in Nepal.

He is a a promising personality and his career as a writer looks to be upstanding. He is an M.A. in linguistics from Jawaharlal Nehru University, New Delhi. As a teacher he was warmly received at R.R.M. Campus, Janakpurdham, Nepal as well as at Darbhanga. He still holds a charming command on his students for his noverlty of teaching technique and approach. He has been a debater in his student life being endowed with several awards by Debating society of B.N College Patna. Patna University. He was ranked third in an essay competition held by Pratiyogita Darpan, Upkar Published from Aagra.

His interest in dramatic activity and music has made his presence felt at All India English Teacher's Conference and other auspicious occasion. No douht, he is a man of prodigious potentiality. His latest book captioned "Translation as a Technique to learn English with this book, most of the hurdles will be overcome. To think that "I can" is panacea to your linguistic bottlenecks. So competence and linguistic performance.