The limited ingredients are used in formulae of Vaidya Jivana. Alongwith this the substitution of common and easily obtainable drugs has made the Vaidya Jivana of Lolimbarajavery useful for the medical practitioners of Ayurveda.

The present translation in English of this important text fulfils the long felt need. The sole object is to provide a simple and faithful translation of the text in order to communicate the ideas as they are without divulging into dogmatic details. It would prove a dependable guide to the youngsters while taking up the course of Ayurveda and an indispensable reference book for the researchers and scholars.

Dr. Nirmal Saxena is well-known for his outstanding contributions in the fields of Ayurveda and the History of Sciences. In the course of nearly twenty five years dedicated to research he contributed innumerable articles to reputed national and international journals in History, Medicine and Science.

Passing through a chequered carrer of lecture in History at Triloknath Postgraduate College, Tanda, Faizabad, he joined as Project Investigator under the History of Science Programme of Indian National Science Academy, New Delhi. Completed there projects,1. "A Critical Study of Yogaratnakara" (1991), 2. " English Translation of Vaidya Jivana of Lolimbaraja"(1996), 3. "English Translation of Camatkara Cintamani of Lolimbaraja"(1999) sanctioned by the National Commission for History of Sciences in India.

At present he is again associated with INSA and working on the Project, "English translation of Vangasena's Cikitsasarasamgraha" at department of History,Bareilly College, M.J.P. Rohilkhand University, Bareilly.

Lolimbaraja was son of Pt. Diwakara Joshi the renowned personality in court of king Harihara. He belonged to village Junnar in Pune. He had attained unprec- edented poetic aptitude by worshipping Goddess Saptasrngi (Durga) at Saptasrnga in Nasik Dist. He was married to Murasa, daughter of Muhammadan Subedar. Later on he named his wife Ratnakala, as per customs and tradition of his family. This Ratnakala was a great scholar whose identity is well discerned in 'Vaidya Jivana' and 'Camatkara Cintamani'. These are poetic and dramatic dia- logues in which Ratnakala has been personified as the most beautiful lady of uni- verse (Tralokya Sundari).

His works
Vaidyavatamsa (Laghunighantu-e-a short pharmaceutical collection) is his first sanskrit creation. It describes day to day use of medicines, its collection. Prayers in Prologue and Epilogue and description of wheat (Triticum sativum Lam-Fam. Gramineae), mango (Mangifera indica Linn-Fam Anacardiaceae) Carilla Fruit and Bitter Gourd (Momordica Charantia Linn Fam. Cucurbitaceae) and butter has made this book most fascinating.

"Camatkara cintamani" and "Vaidya Jivana" Either of these two books inter- pret several medical formula and it is full of poetic diction. Moreover as mentioned earlier, these books have beautifully portrayed lolimbaraja's wife Ratnakala.

The simplicity and importance of the formulae mentioned in these books compel every physician to collect these formulae.

Vaidyaka Kavya is his brief composition. It has discussed only medical treat- ment of a few diseases without emphasising any literary quality.

The work aims at to conclude its period, controversy of several critics and their solution, there after biography of lolimbaraja. Customs and tradition of Lolimbaraja's family, his Nakh-Shikh description of his wife Ratnakata will be dis- cussed in details. A brief light of his petronage of Harihar will also be taken into account.

Nature and Contents of the Vaidya Jivana
The text of Vaidya Jivana begins with an auspicious introduction in the form of obeisances. The prayers of Lord Krsna and goddess of parvati denote the old tradition of Ayurveda which is followed by Lolimbaraja from the other earlier au- thors. The complicated disorders of human body are analysed in poetic and -dra- matic dialogues in that Ratnakala has been personified as the most beautiful lady of universe. Because Muslim rulers indulged themselves in sex. So Vaidya Jivana is the best example in presenting the condition of Ayurveda in Mediaeval India.

In the next verses of the treatise after worshipping goddess Parvati the author states that he can write within an hour one hundred verses having capability to challenge the sweetness of the nectar of the lips of charming women. The author of Vaidya Jivana was blessed by his preceptor and he composed this work to provide livelihood to the physicians.

lolimbaraja composed Vaidya .Jivana having no care about the condemna- tions made by the critics. The Lolimbaraja states that expert of medical treatment, Caraka, Susruta and Vagbhata like sages being merciful on men whatever said for removing the diseases. He is writing here the complete secret of the same. There is nothing added a single imaginary word by him in this treatise. This statement can be compared with the declaration made by the author of Sarangadhara-Samhita that all the recipies are those formulated by ancient seers, used and found effec- tive by reputed physicians. An appreciator of beauty can only evaluate the at- tempts of the author. A kind and sinless hearted physician is entittled to read Vaidya Jivana. A beginning of the treatment should be done when the curability of a disease is determined after the diagnosis. 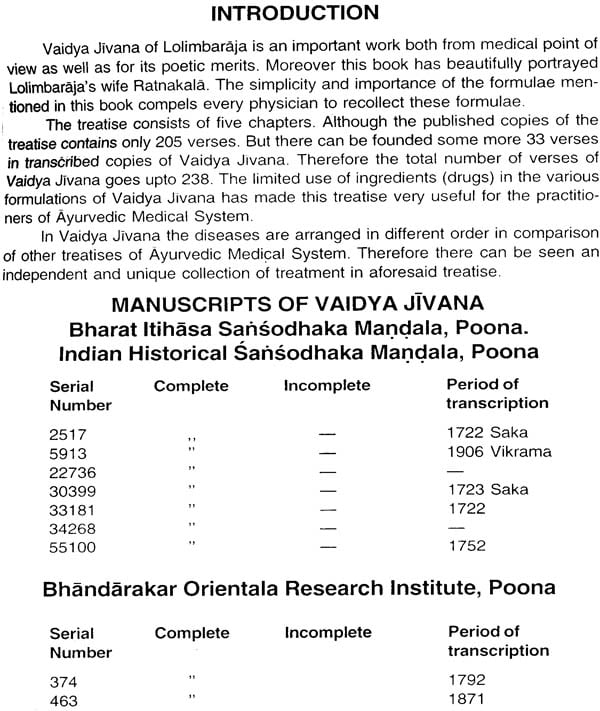 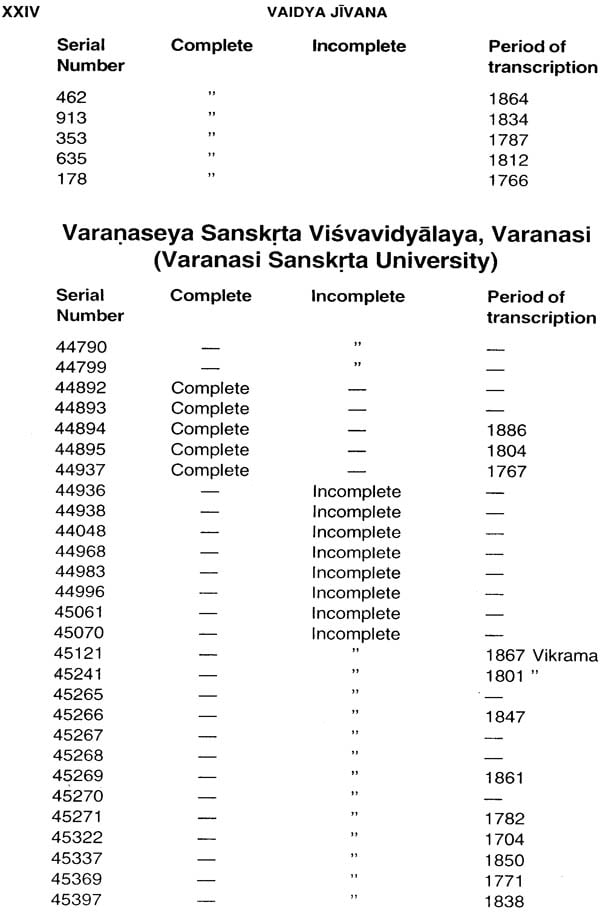 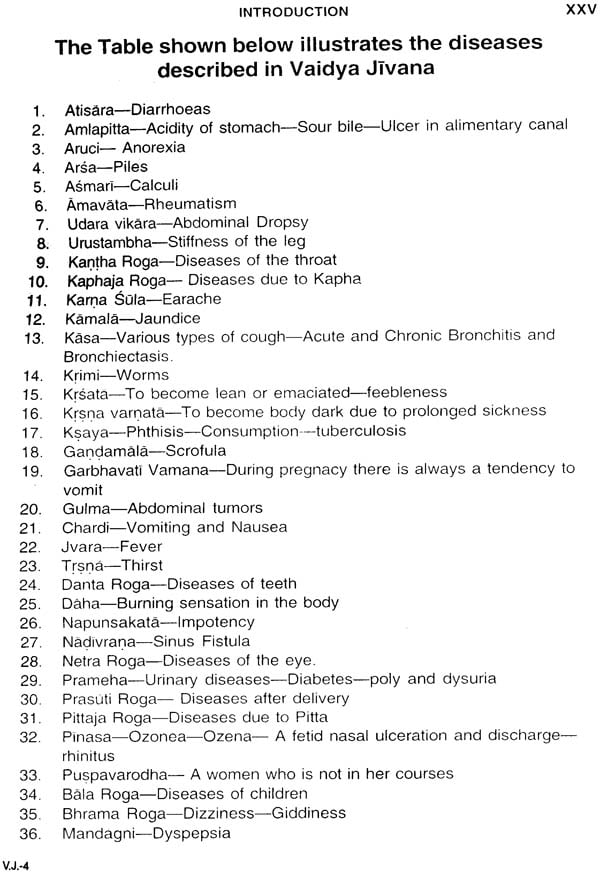 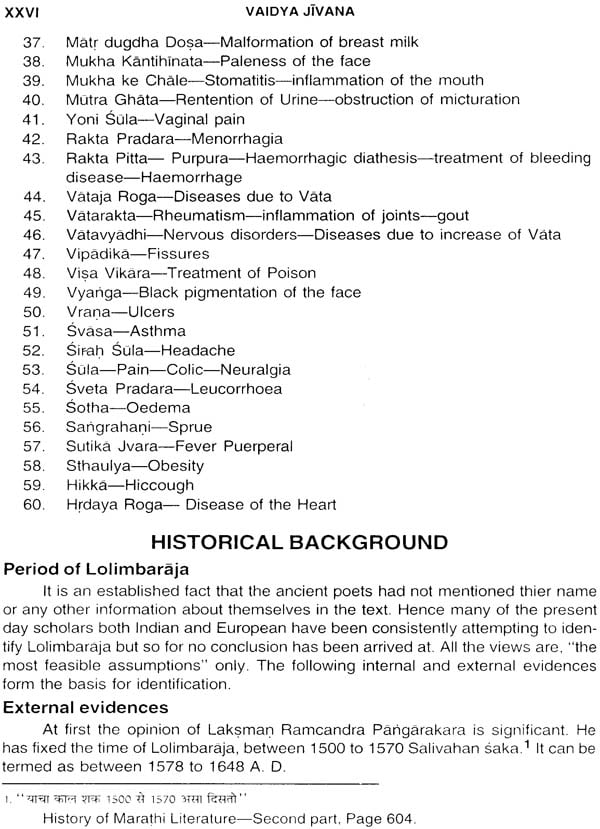 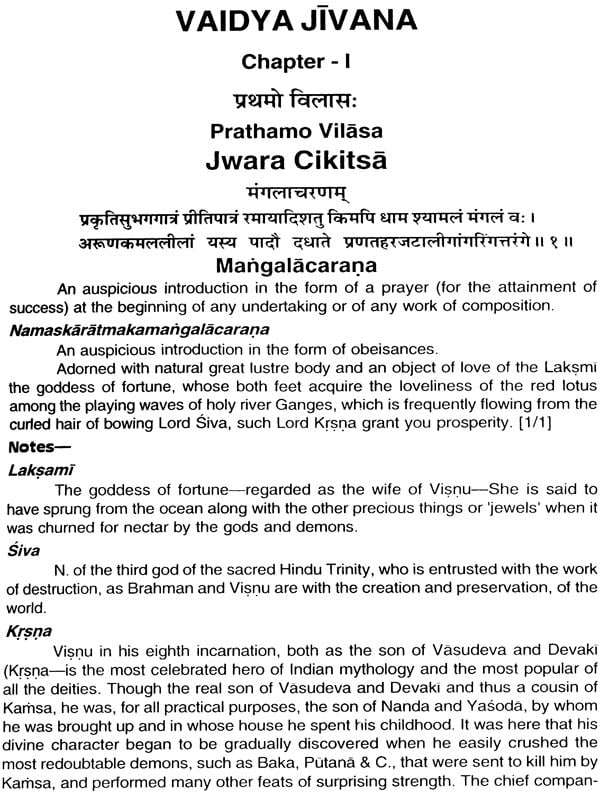 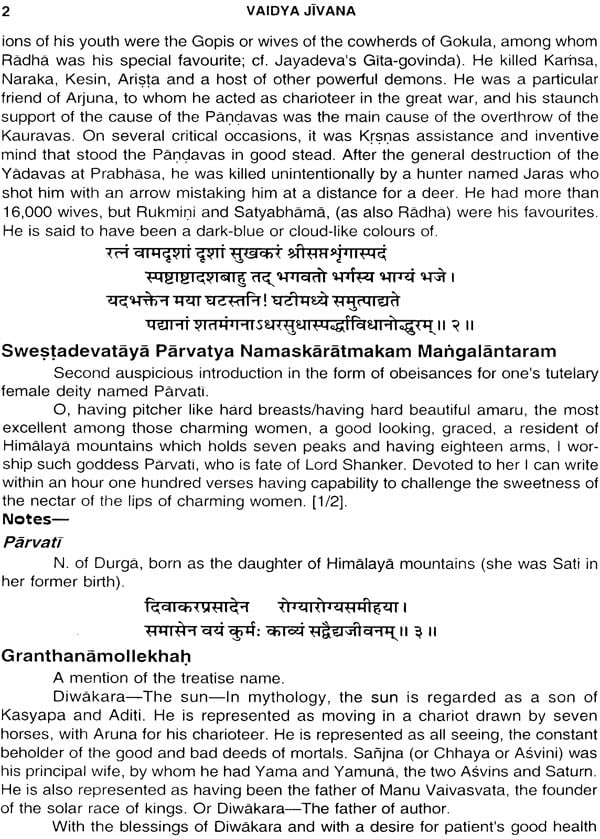 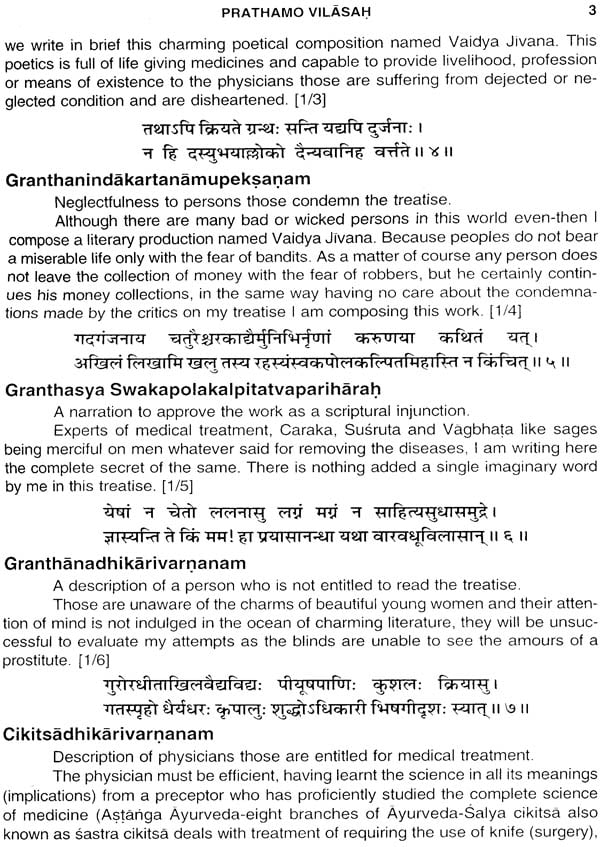 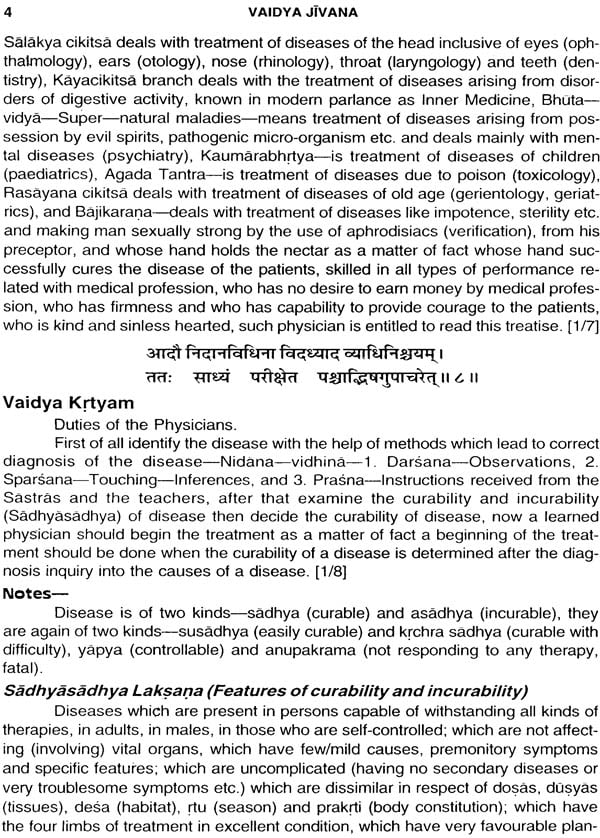 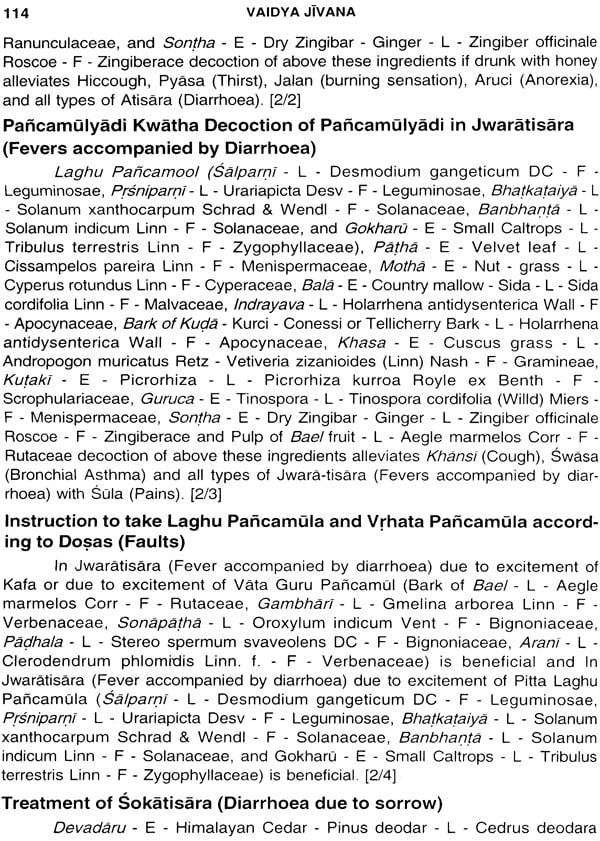 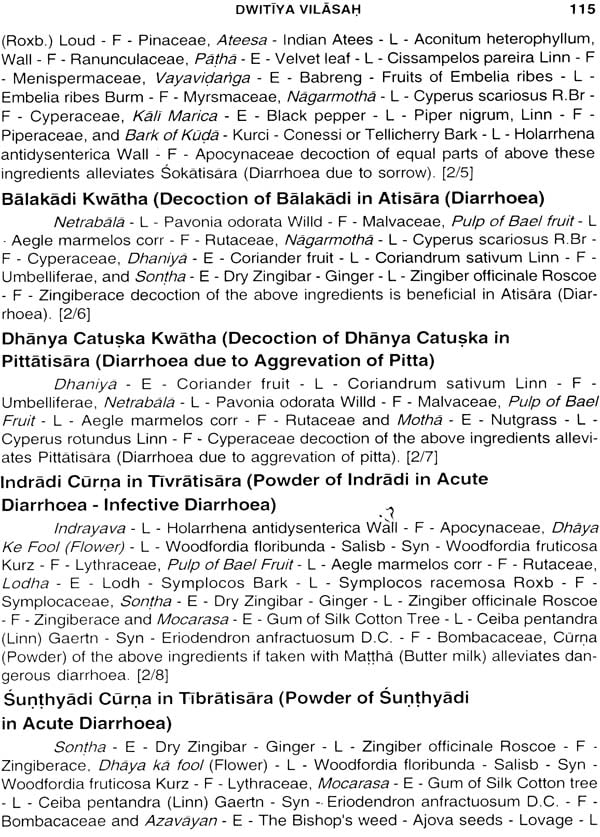 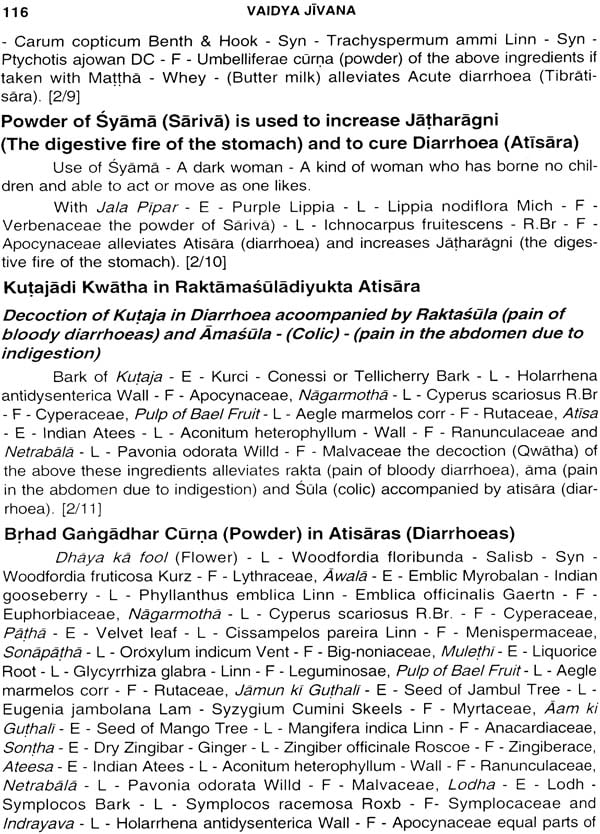 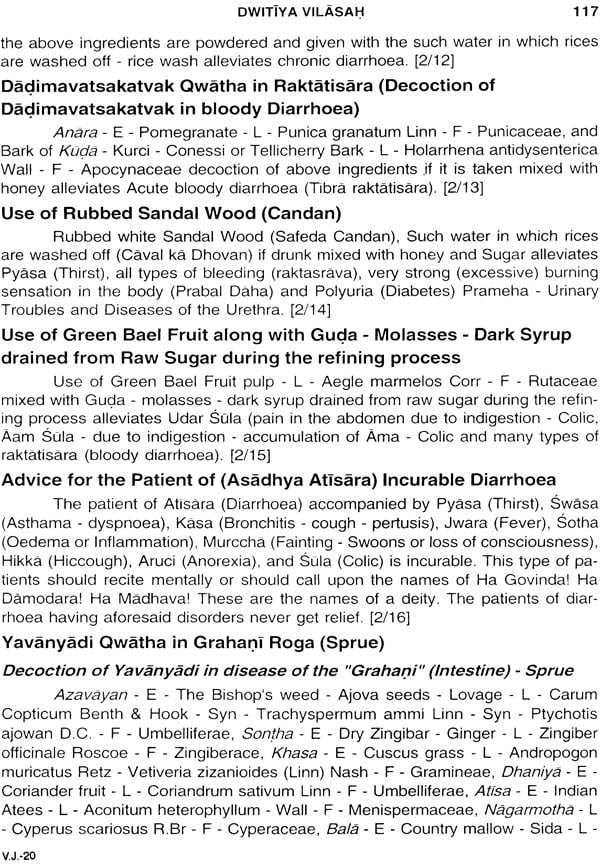 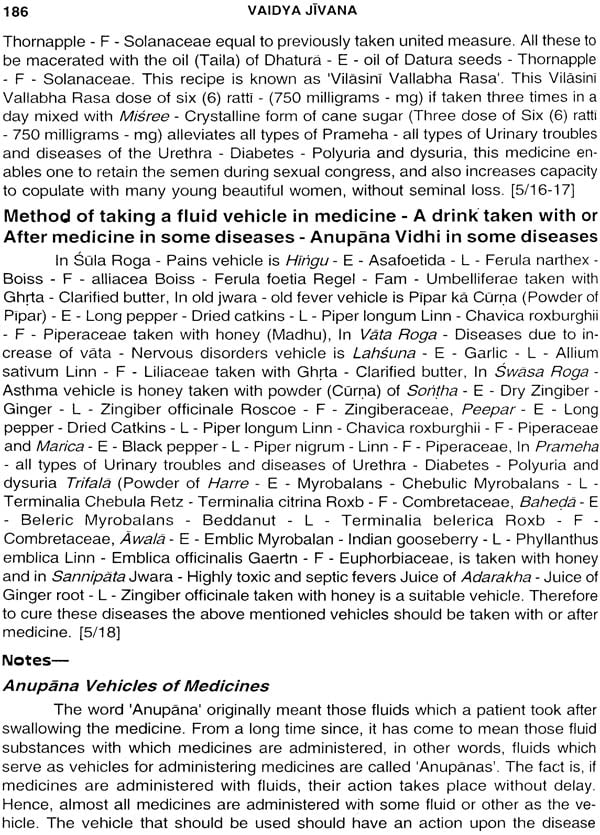 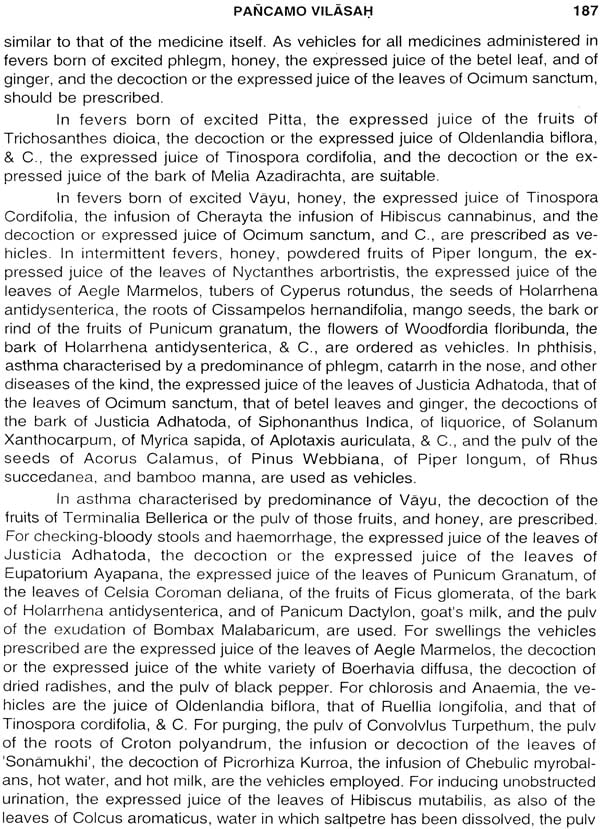 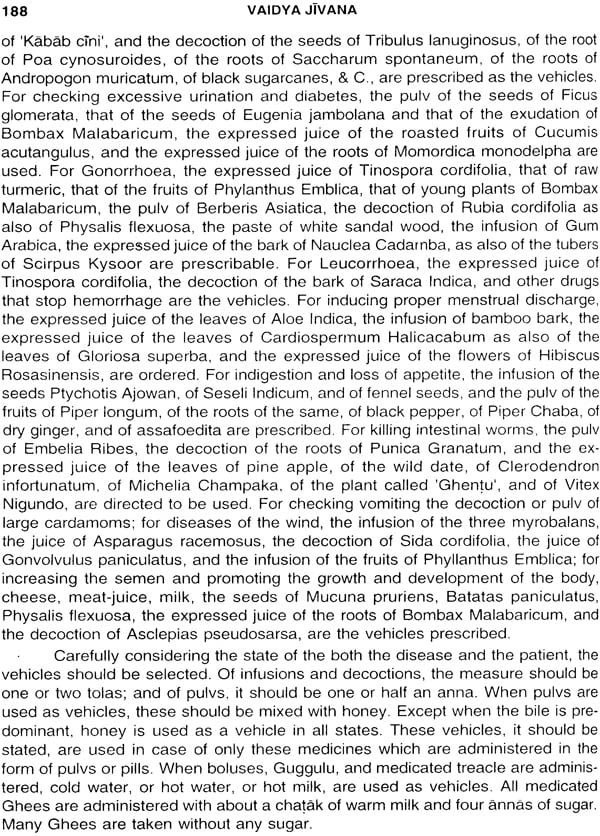 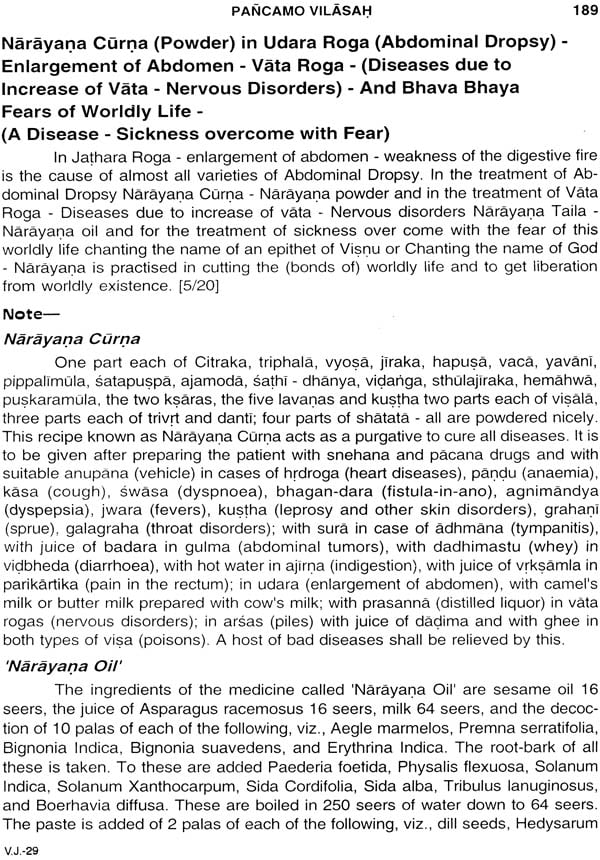