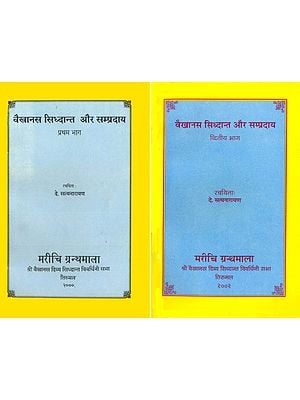 This is a book which represents our efforts to introduce the Vaikhanasa religion and philosophy to the people. This is not obscure in the sense that there is no material but is less known to common man. Even the scholars are not fully aware of the contribution of the Vaikhanasa system in the totality of the indological literature particularly the religious one. The Vaikhanasa system has an unbroken continuity from the times immemorial. During the middle ages also the Archakas following the Vaikhanasa religion were administering the temple services particularly in the South. Vedic traditions were kept alive throughout that turpulents period. This small community of the Vaikhanas is responsible for keeping the institution of puja in all the temples throughout India by using Vedic mantras. Vernacularism in the temple administration was not allowed to replace the Devavani. Tradition of temple worship as an institution was strengthened in spite of onslaught by muslim invaders and personal rivalry of the kings or chieftains of the small principalities patronizing a particular religious teacher.

Vaikhanasa Agama deals with worship in Vishnu temples according to Vedic tradion. Sage Sri Vikhanasacharya is the founder teacher of this system. He came to Naimisaranya and taught this Agama to four disciples. They are Sages Bhrugu, Mareechi, Atri and Kasyapa. These sages have written twenty eight books and they are known as Vaikhanasa Bhagavat Sastra or Sri Sastra. These texts explain in detail about the construction of temples, preparation of Icons, installation of Icons, Daily worship and Utsavas etc. They also explain Ashtanga Yoga and Archana i.e. Bhakti Marga.

The author Sri Devarakonda Satyanarayana garu of Tirupati has taken great pains to compile a book of this nature. The book has been written through a historical perceptive. This is the first attempt to write any book on this subject in Hindi. We are very much thankful to the author.

The book presses into service the available literature in the field and draws from Bhuddism, Nath system and many other small religious groups who do not claim to have any text except folk religion living only in tradition without any written document.

The author has made special studies of early and medieval Vaisnavism and his labours are before the scholars to judge.

When we intend to publish this book, we have approached T.T. Devasthanams for financial aid. They have supported our request and granted the aid. We are thankful to Sri I.V. Subba Rao, I.A.S., Executive Officer, for this timely help and support. We are also thankful to Sri N.S. Rama Murthy, M.A., Editor, T.T. Devasthanams for his timely action and good offices to get the financial aid granted.

We are also thankful to Sri Vaikhanasa Samaj, Vijayawada for their voluntary co-operation to involve in this project. We cannot forget the help given by Sri Suresh Kumar Gupta, S/o Sri Hari Ram Gupta, New Delhi who are very generous in supplying the paper required for this project with the good offices of Dr. Brijendra Kumar Sharma, New Delhi.

Last but not least, we thank M/s. Sri Satya Sai Graphics, Tirupati for DTP composing of the book neatly within the time. We also thank M/s. The Vani Press, Vijayawada for printing the book.

The second part has five chapters, the 6th Chapter deals with the religious institutions pooja and the necessary details sectarian and comparative, the 7th Chapter deals with the Vaikhanasa Society, the institution that created to safeguards the character of the society, structure of the society, the marriage, education and goal of life, activities to achieve the same-incidentally the use of metals, jewels, the concepts of ornamentation of the utensils of daily use as also the facilitating pots in the process of pooja are also enumerated. The 8th Chapter has two topics, the Idol and the Temple. History of Idol worship Idol as a symbol of reverence and bestower of Grace, the history of Idol worship in India, its ramifications, temple its place in the Society impact on the human soul. The 9th Chapter deals with Kriyayoga and instrumentality of Yoga system and deviation from the classical yoga system of Patanjali. The 10th Chapter gives summary of the contribution of the Vaikhanasa as a philosophy, religion and the society in the Indian Context.

We thank the Author Sri Devarakonda Sathyanarayana Garu for the labours he undertook in writing the book giving the institutions developed by the Vaikhanasa Sect and in turn the institutions thus developed help the Vaikhanasa Sampradaya to develop. There is much material available in Vaikhanasa literature on architecture, sculpture, Iconography and allied topics and much material on puja, its contents, serial order, the number of such actions, the relationship of such actions and other topics important for puja ceremony.

During the printing of the book our Sabha Secretary late Sri D. Vikhanasa Charyulu expired before he could see the printed book. We regret his demise.

We are very greatful to the T.T.D. authorities in particular to the Executive Officer, Dr. P. Krishnaiah, I.A.S., as well Dr. I.V. Subbarao, I.A.S. who took interest in this publication. We appreciate the efforts of Dr. N.S.Rama Murthy, the Editor, T.T.D Publications.

We are thankful to Sri G. Prabhakara Charyulu for his untiring and enthusiastic assistance in this project which has a special contribution to the religious literature of India. So far known only to the followers of the Vaikhanasa Sect now in Hindi will help particularly the North Indians for whom it is primarily intended.

We are thankful to Sri Vaikhanasa Samajam, Vijayawada for their consistent and continued help and assistance in the publication of the Vaikhanasa Literature.

We are thankful to Sri Sathya Sai Graphics, Tirupathi for D.T.P. execution neatly and qualitative style and M/S. Vani Press, Vijayawada for printing this bopok, nicely and in time. 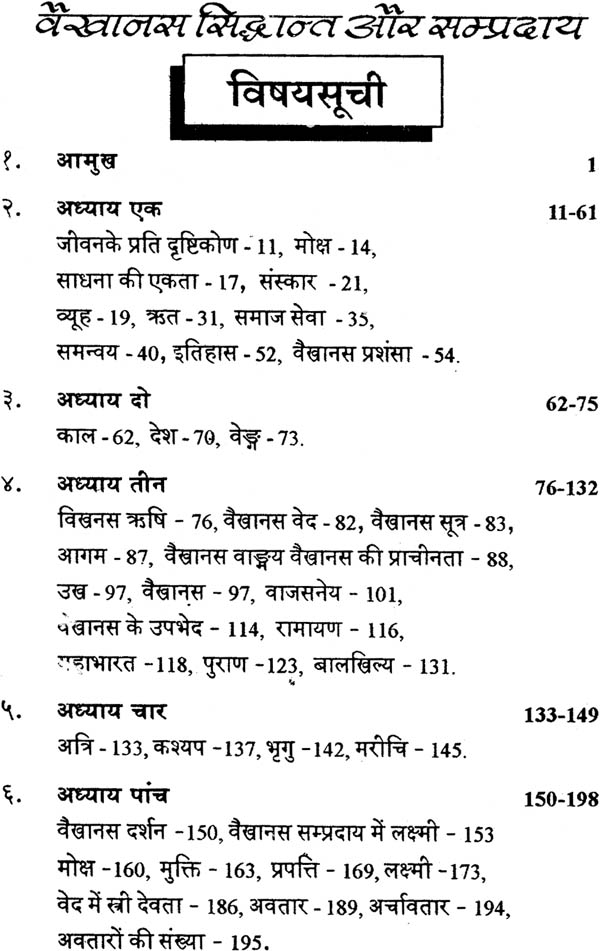 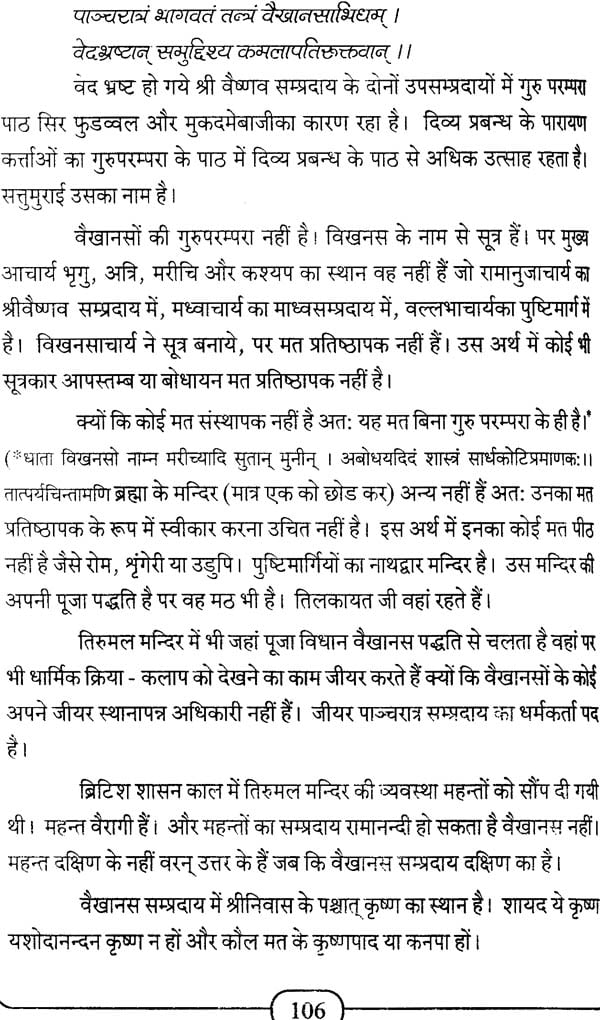 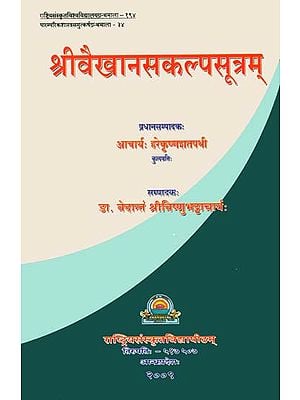 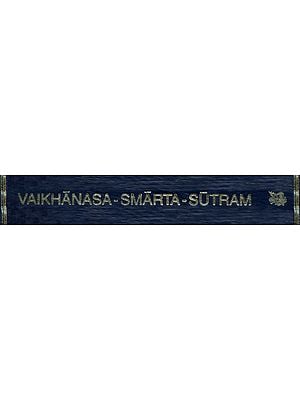 Vaikhanasagrhyasutram and Vaikhanasadharmasutram: Vaikhanasasmartasutram (The Domestic Rules of The Vaikhanasa School Belonging to The Black Yajurveda)
By Dr. W. Caland
$21
FREE Delivery 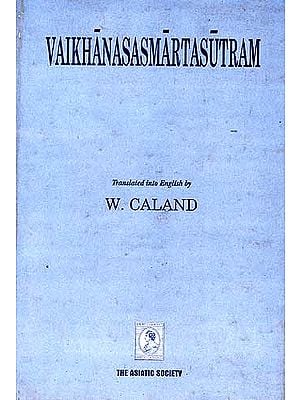 Vaikhanasasmartasutram: The Domestic Rules and Sacred Laws of The Vaikhanasa School Belonging to The Black Yajurveda
By Translated Into English By: W. Caland
$39
FREE Delivery 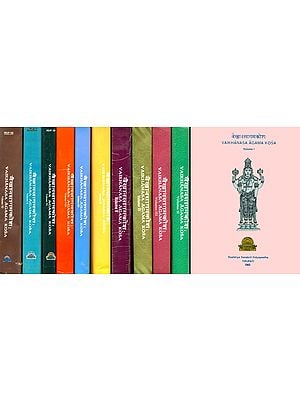 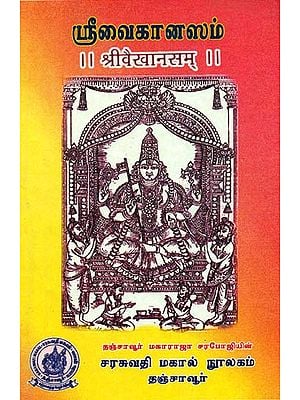 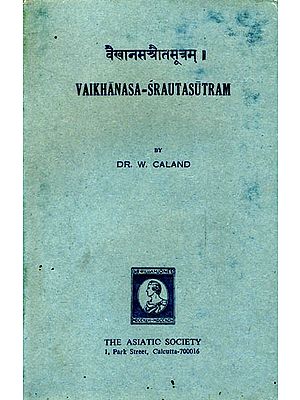 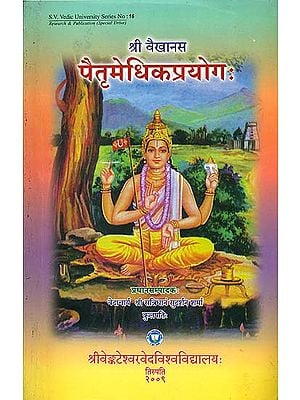 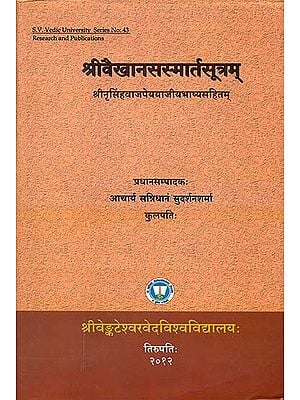 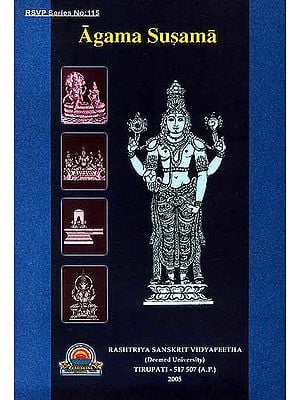 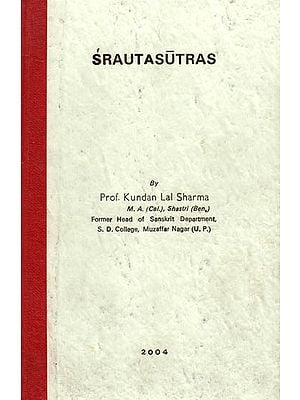