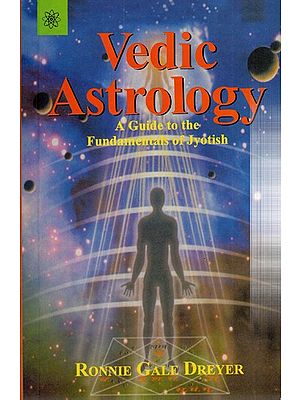 FOR TWO THOUSAND YEARS, Hindu predictive astrology was virtually unknown in the Western world. During the mid-1980s a handful of pioneering astrologers travelled separately to India and brought this profound knowledge home, changing the situation forever. Ronnie Gale Dreyer was one of these individuals to whom Western astrologers shall be eternally indebted. She is also the first American woman astrologer to complete a comprehensive text on the subject-a subject that, m the East, is generally, though not absolutely, dominated by men.

Vedic Astrology is a major contribution; remarkably complete, exceptionally clear, and profoundly satisfying for those hungry for the knowledge of Jyotish or "the science of light," as it is called in India. Although the enormity and complexity of this vast subject nearly always seems overwhelming to begins. Ronnie Dreyer has purposely organized the material in a way that is clear, understandable, and accessible to all. It is no =all benefit that the author, an expert in the Eastern system, .pens also to be schooled in Western astrology. This enables to fathom exactly the perplexities and pitfalls that veteran -4-stern astrologers new to Eastern astrology are likely to encounter. Throughout the text, there are warnings and hints that made astrologers in the proper direction, protecting them from the interpretive disasters and calamities experienced by generations of forebears who have tried, and consistently failed, to learn Jyotish from Indian texts.

As a practicing Jyotishi (Hindu astrologer), Ronnie Dreyer ins paid her dues many times over, not merely by professionally analysing thousands of horoscopes, lecturing at astrology conferences worldwide, and writing two authoritative astrology sorts, but especially by having learned Jyotish in India with an Indian mentor. The benefit of this, as any astrologer who has studied in the East will immediately recognize, cannot be overemphasized. Jyotish is an integral part of an unparalleled mystical and spiritual culture. In order to really grasp the art of this profound ancient knowledge, not merely with one's mind but with heart and soul and deep consciousness, nothing com-pares to immersing oneself in the culture of India and attuning one's intellect to the peculiar mindset of a masterful Eastern astrologer.

We Westerners are trained to think in a linear fashion, organising and categorizing data so that it may be easily processed and assimilated. Indians, raised in a society where spirit is of the essence, live in a world of abstractions, instincts, and intuitive notions; in short, a world that routinely transcends boundaries, limitations, logic, and reasoning. Although attuning one's mind to an Indian astrologer's is at times a harrowing experience, the rewards for doing so are great. Indeed, the clarity, precision, and fine organization that make the information in this text so accessible are a direct result of Ronnie Dreyer's willingness to temporarily relinquish her own mental strategies in favour of her cultural opposite Indian mentor. Those who find the material in this book demanding should consider the fact that you are learning Jyotish the easy way. Make no mistake, Ronnie Dreyer has done the rigorous work for you. She has analysed and digested the Eastern thought process underlying Jyotish in order to present the material in a way our logical, Western minds can comprehend. If this seems obvious or irrelevant, consider a few tormenting experiences a Westerner is very likely to encounter at the feet of a Jyotishi: When studying a horoscope of a friend or loved one with your mentor, the Jyotishi makes some startlingly accurate prediction using a technique completely outside the realm of the system he or she has just taught you. For some inexplicable reason you are not told about the technique. The conversation goes something like this:

Jyotishi: This woman must be an actress.

Confused Westerner: She is! But how can you tell?

Confused Westerner: But what do you mean? What does Sat-urn occupying the 12th house from Venus have to do with being an artist?

Confused Westerner: She is. But why?

The conversation now turns to a completely different subject, with no satisfaction in sight. Some weeks or months later, depending on the Westerner's luck, he or she learns from a different source that the Jyotishi was in fact incorporating an astrological technique from either Jaimini or Tajaka, two entirely different systems of Jyotish. (The system taught in this book is called Parasara, named after the great ancient Indian Seer. It is by far the most popular system, and is the one explained in all the books written by Westerners so far.) In this case, the logic behind the technique in question is that if Saturn (a natural career indicator) occupies the house preceding Venus (the planet of art) the person would likely be an artist, assuming the birth chart in other general ways indicates artistic talent. This is be-cause if Saturn occupies the house preceding Venus, the first transit Saturn makes after birth is a conjunction to Venus. As to how the astrologer knew the woman was an actress rather than a singer or dancer, a rational explanation is not in order. The intuition needed to make that deduction is considered simple for an experienced Indian astrologer.

Jyotishi: This person has problems with his mother. Saturn is in the 4th house.

Westerner: Yes, that's true. His mother has a difficult life and the relationship between mother and son is strained.

IN THE AUTUMN OF 1976, I was fortunate enough to travel overland to India where I had the rare opportunity to study Jyotish (Hindu or Vedic astrology) in Benares, first with Dr. Muralil Sharma, a Professor of Jyotish at Sanskrit University, and later with Pandit Deoki Nandan Shastri, a practicing astrologer. It was an exceptional time, .as many Westerners both young and old had embarked on the same quest for Eastern knowledge and culture to bring back home to Europe and America. Starting out from Athens, our tour bus with its 22 passengers journeyed through eastern Greece, Turkey, Iran, Afghanistan, and Pakistan before reaching its final destination: India. My memories of the mosques of Istanbul, the city of Teheran torn between the Shah of Iran's modernization and its traditional Islamic culture, the expansive barren deserts and wild-eyed no-mads of Afghanistan, and the Golden Temple of the Sikhs in Amritsar, India (later used as a fortress during their internal strife with the Hindus) bring back images that are as vivid and clear today as they were when I first encountered them. Looking back, I feel lucky that I was able to travel through Asia during this historically unique period when there was still the chance to view firsthand Iran and Afghanistan-countries that have since been transformed and will never again be the way they once were.

When we finally arrived in India, my first reaction to this strange land was, to say the least, one of total disorientation and complete cultural shock. While I had expected India to be consummately different from both Europe and America, never in my wildest dreams had I envisioned the overwhelming pandemonium which I encountered there. Everywhere I looked I saw cows-deemed holy by the Hindus-freely roaming the streets, seeming at times more human than the homeless beggars whose frail bodies dotted every street corner. The cyclists and rickshaw drivers, not unlike the motorists and taxi drivers of any Western metropolitan city, added to the chaos by obstructing and tying up traffic. To add to the confusion, tea shops, clothing stores, and perfume stands were all wedged together waiting to be patronized by the crowds of exotic Indian men and women dressed in their kurtas and saris. The styles and materials of these garments have not been altered by the passage of time and seem to parallel Jyotish, whose basic principles can be found in ancient and definitive texts written as far back as the fifth and sixth centuries A.D. The application of the rules of Jyotish to the lives of contemporary Indians evinces their adherence to the tenets of Hinduism-a centuries-old religion-and contributes to the cohesiveness of a society virtually untouched by modern life.

In the capital city of New Delhi, the endpoint of the bus ride, I inquired as to where I could learn Hindu astrology to supplement my knowledge of Occidental astrology. I was told to go to Benares, 1 a city in the north-central province of Uttar Pradesh, which houses Benares Hindu University, one of the largest and most diverse centres of learning in India. In addition to the University's matriculated Indian population, its enrolment boasts a huge cross-section of international students whose education is conducted in English. In Benares, where I lived for the next six months, I met many Europeans and Americans who were studying subjects such as religion, philosophy, Indian music, Hindi and Sanskrit both at the University and/or with a private tutor. None of them, however, were familiar with anybody studying or teaching Jyotish, the actual term for the mathematical and astronomical principles which are the foundation of what is now more popularly called Vedic astrology. I learned that Jyotish was taught at Sanskrit University, located at the opposite end of the city. However, there was one drawback. Instruction at Sanskrit University was con-ducted using Sanskrit texts, the ancient written language of India.

By chance (if there is such a thing), Dr. Muralil Sharma, a Professor of Jyotish, was in the Mathematics Department office at Sanskrit University at the precise moment of my inquiry and promptly offered to tutor me for one hour every day. Further-more, his English was impeccable. When I brought up the question of payment, his reply was simple: Because I had travelled such it long distance in search of knowledge, it was his professional obligation to teach me whatever he could for the duration of my stay. This attitude exemplifies the Hindu conviction of predestination to fulfil a particular task. Dr. Sharma was grateful that the gods had entrusted him with their wisdom and, by passing it on to others, he was repaying them for granting him that knowledge.

In order to take notes from Dr. Sharma for one hour each morning, I bicycled crosstown faithfully each day to the San-ilk it University campus, braving the intense heat, the freely roaming cows, and the aggressive rickshaw drivers. Dr. Sharma imarticted me to wear a traditional Indian sari so as not to dis-tract the young Indian men on campus, and it was imperative that I prepare for my daily lesson by reciting what I had learned the previous day. Because Dr. Sharma knew that the length of my stay in India was limited to six months, he gave me n crash course in Jyotish by enlightening me about the ancient scriptural writings most relevant to modern life. He de-fined the nature of the Sidereal Zodiac, Tithis, Nakshatras, and other astronomical principles unique to Jyotish and explained 'hove fundamental interpretive techniques which required the learnt complicated mathematical calculations. In order to illustrate the intrinsic relationship between astrology and Hinduism, Dr. Sharma also pointed out the horoscopic indications of an individual's patron god or goddess, caste, previous incarnations, and other religious principles which could affect him or her. 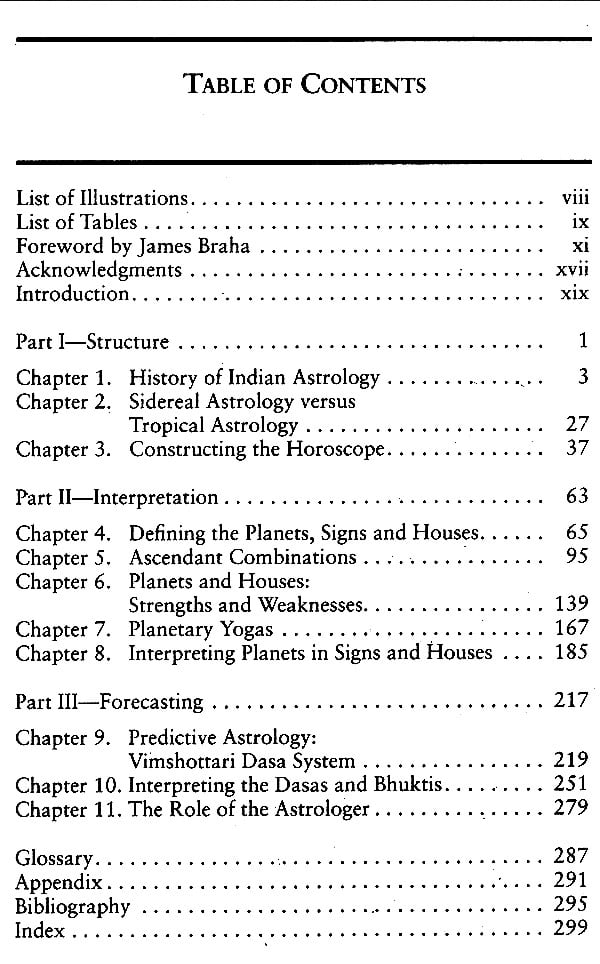 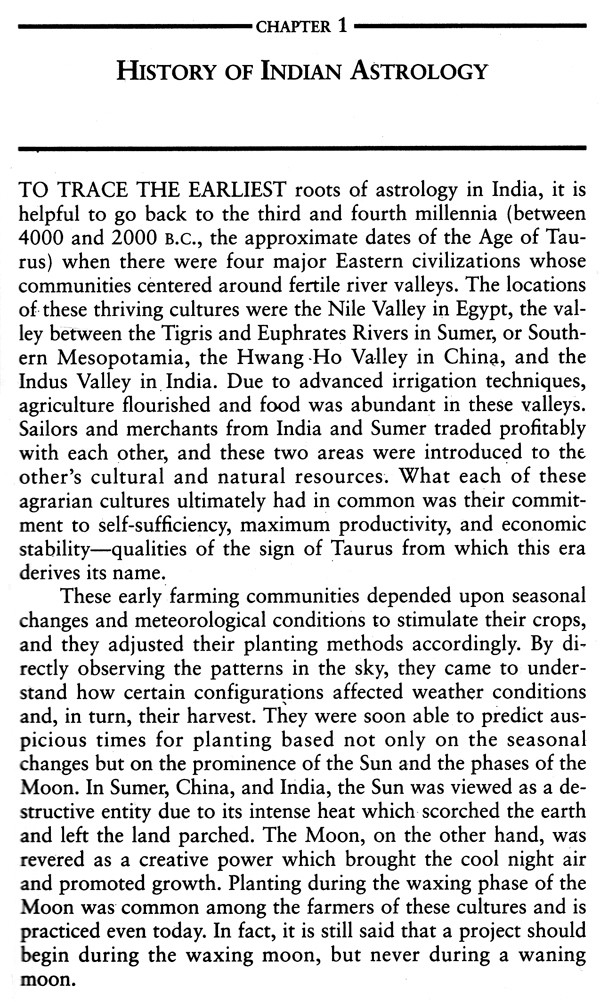 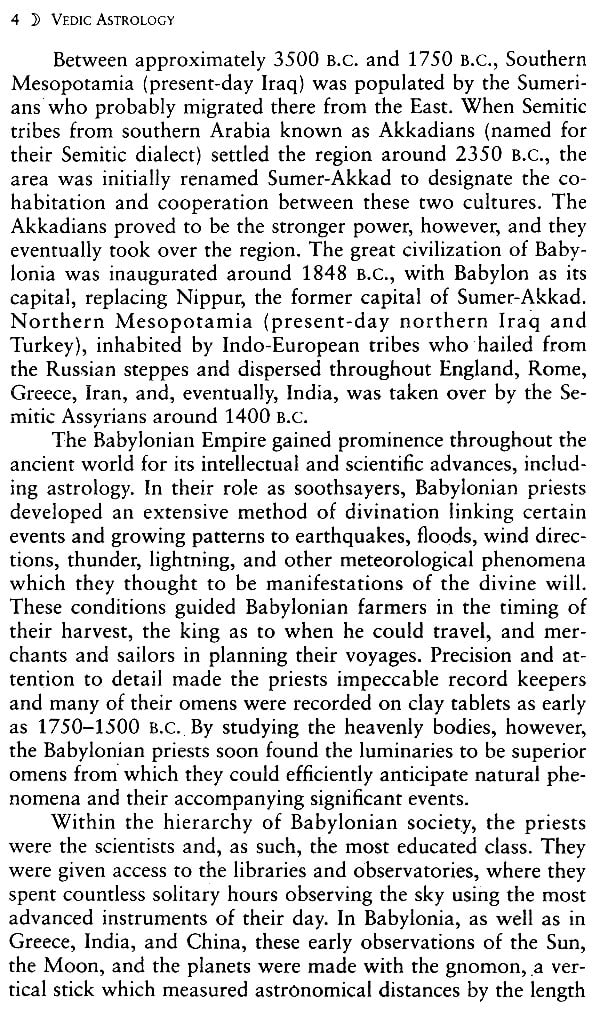 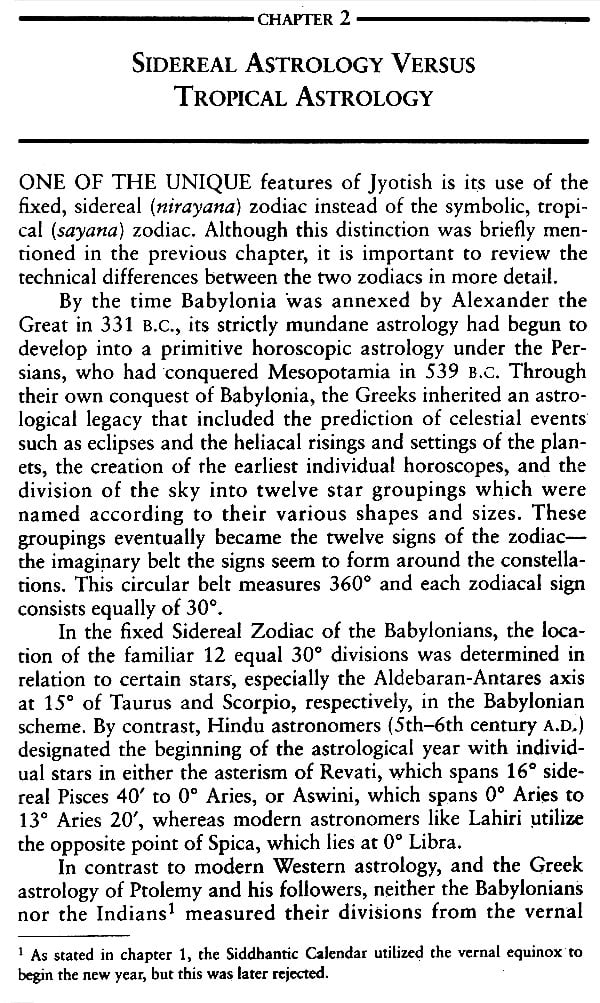 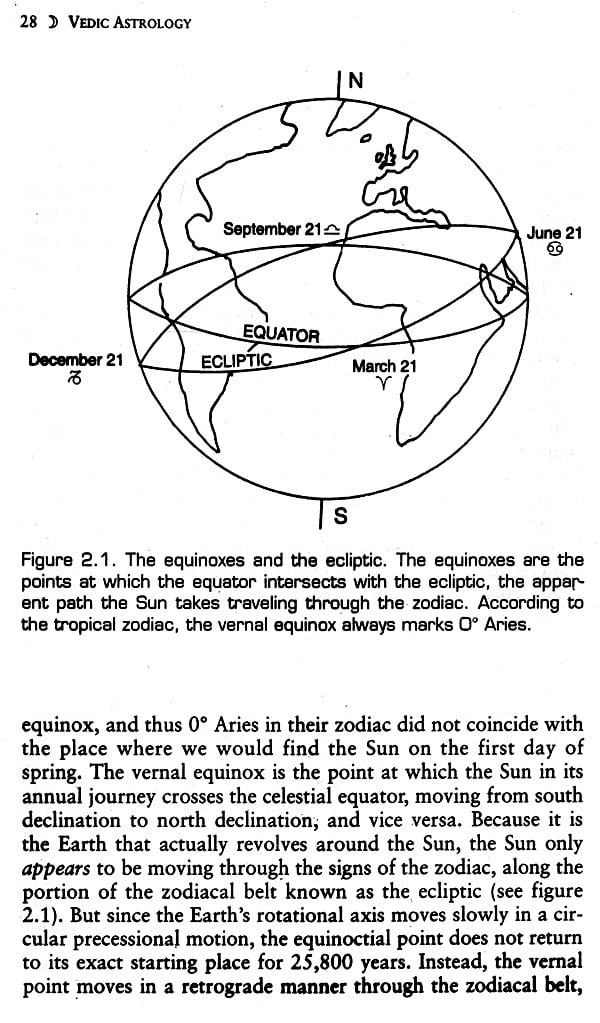 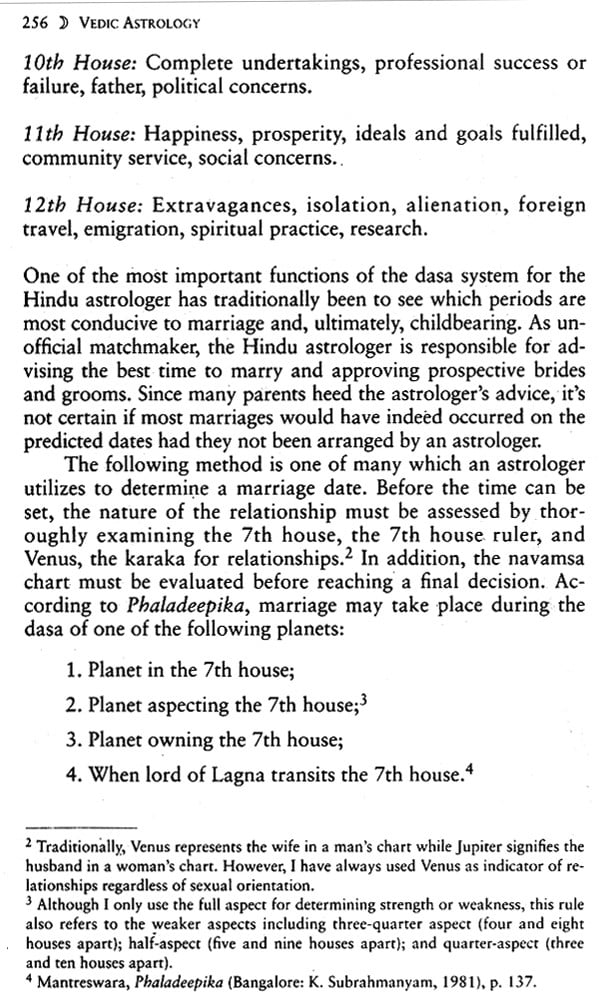 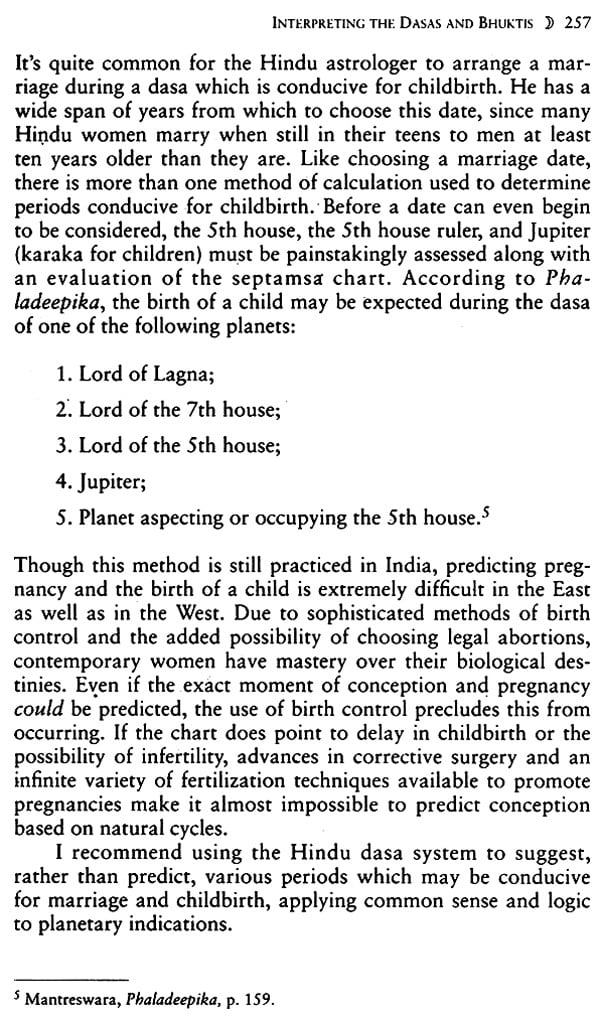 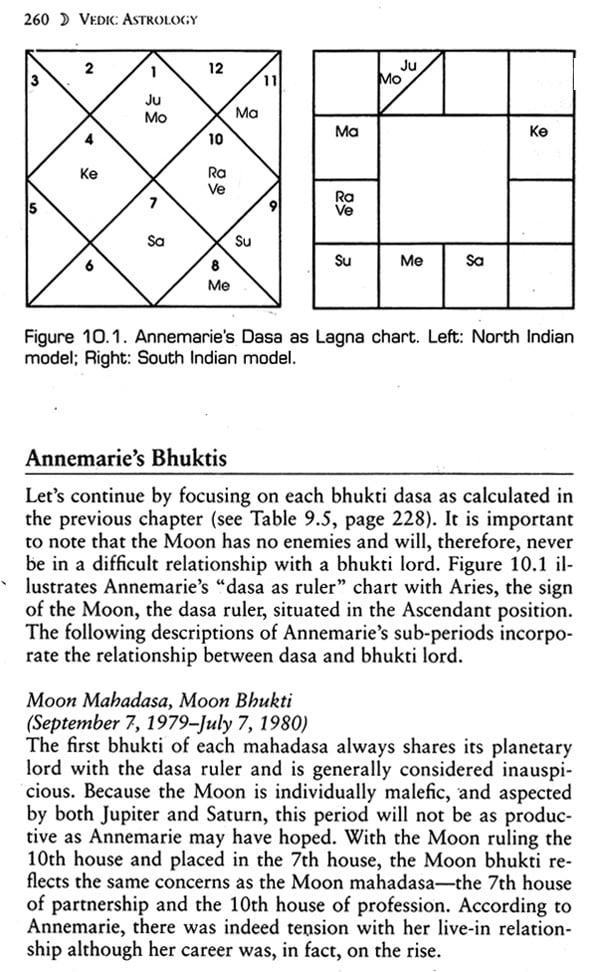 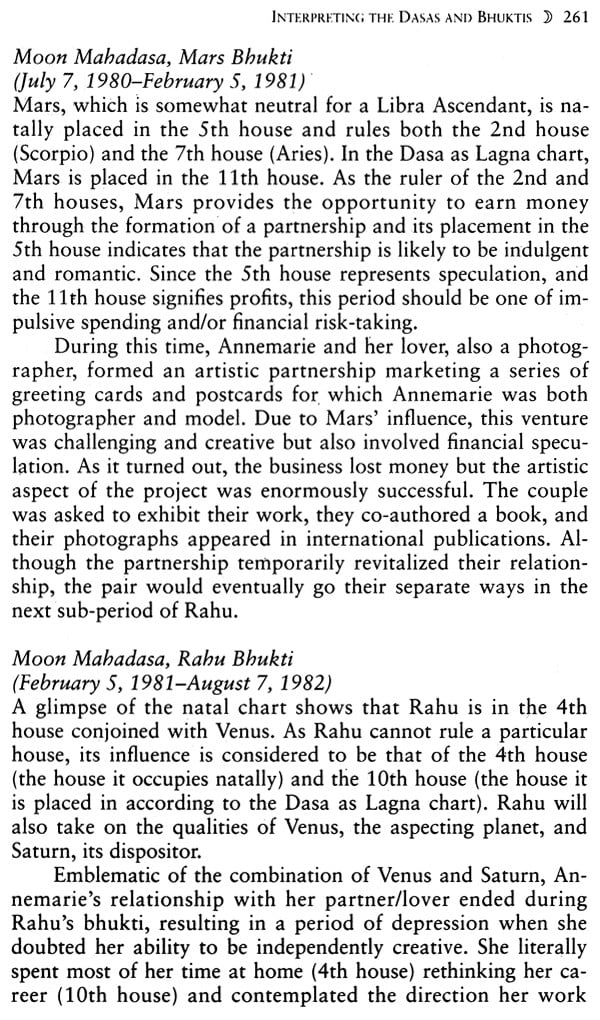