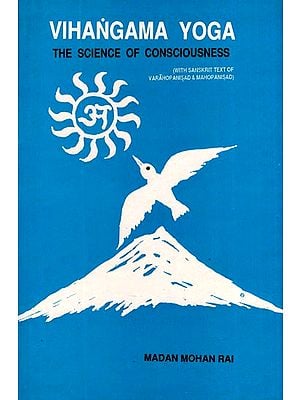 Vihangama Yoga is a Vedic system of meditation which is one of the quickest methods of God-realisation, from among the various other Hindu mystic systems described in scriptures. It is practised with the help of "Surati" and "Nirati", the subtle rays of the soul, which is conscious by nature. During trance these conscious forces travel Niradhara in Brahmaloka like the bird flies in Antarikshaloka. At the higher stage of Sadhana Surati of a Yogi is transformed into Nirati and then the Nirati of such Yogi gets connected with the Supreme Spirit who enjoys the bliss of the Brahman. Such excellent yogi in the last attains "Moksha" the highest goal, under "Purusharatha Chatusthaya". We had lost this heritage with the loss of Mantra Drasta Rishis in the great war of Mahabharata, which has been revived now.

Speciality of this Yoga is that all the Yogic actions are governed from Akshara mandala; the highest conscious zone, and are regulated, channelled, guided and streatmlined by Sadguru with the power of integration and disintegration of Paramanus.

Its practical system is purely rational and has been proved by Aditya Himalaya Yogi Maharshi Sadaphal Dev in Ecstasy and tested by the author during Sadhana.

Madan Mohan Rai born in Distt. Ballia (U.P.) in a Bhumihara Brahmin family of Nonhul descent, belongs to Pararshurama Dynasty in Kashyapa Gotra. He rounded off his educational career with a Postgraduate Degree from the University of Allahabad. After completing studies, he joined the Indian Air Force and underwent training for G. D. (Pilot) in 1962 but subsequently withdrew from there and joined Central Bureau of Investigation in 1963. By virtue of commendable works exhibited in the profession he was awarded the Indian Police Medal for meritorious services in 1985. He is still in service in the Govt. of India holding the rank of a Deputy Superintendent of Police.

While on tenture in the Himalayan region of Sikkim he came across one saint by name Anubhavananda of the of the vulnerable order of Vihangama yogi Maharsi Sadaphal Devji, who initiated him and his wife Smt. Sumitra Devi in the path of Vihangama Yoga. The initiation given by him was quite mystifying. It led them both to several quick spiritual exposures and ignited the mercurial hunger in them for the Divine quest. They subsequently came at the feet of Parampara Sadguru and Acarya Svatantra Devji Maharaja who initiated them for Sadhana of Aksara Mandala. Shri Rai there after devoted most of his partime in spiritual Anusthanas, studies of scriptures, treatise on Yoga, the mystic part of Buddhism, Tarntrika systems, the Esoteric part of different religions of oriental and the occidental Master. He held holy spiritual discourses and contributed articles on the sophisticated part of this science which were published in the magazines of national repute.

The words Brahman, Paramatma or Isvara are all synonyms for one and the same name and represent the single entity called the Universal Truth, which is the primary cause for all manifestations in both Jada and Jangama. This entity is by nature Omnipresent and Omnipotent and without a beginning or an end and due to this reason He is known an ‘Nitya and Anadi’ also. Before creation of this world there was only this Absolute Self alone and no one else. He himself created the four Lokas called Ambhah, Maricih, Marah and Apah. The ‘Ambhah’is located above the heaven hence called as Dyt Loka, the Divine world duly supported by heaven or the abode of Gods and the regions beyond that. ‘Maricih’ is the Antariksa Loka, also called as Bhuvah Loka. Mara Loka is the Loka of the zone of solid earth and ‘Apah’ loka is the Loka down below the Mrtyu Loka (i.e. the region of water)-Ait.Up.1/2. Thus He is the creator of the world widespread in all the above Lokas, comprising of the Liquid, Solid and the Gases.

Some intelligent people say the Nature (svabhava), where as some others speak of the Kala (Time) as the real cause that revolves the Brahmacakram (Wheel of Brahman), but in fact, none of them do really know the authentic cause of this phenomenal world that is seen, heard or expressed. It is in-fact the glory of the Brahman which is spread throughout in every object of the universe. (Svet.Up.6-1). He is thus the Primeval and Pristine cause of the union of spirit and the matter, ‘‘nfe: a damfafira @g:" (Svet.Up.6/5). This single Brahman is being seen hidden in all the beings, and thus being all pervading He is the inner self of all the creatures. (Svet.Up. 6/11). His existence, therefore cannot be confined to any particular age, time or period. Similaly the unrivalled doctrine by which this Celestial Being is identified called ‘Brahma-Vidya’,, is also not restricted to any age or time factor. This imparishable doctrine called Yoga was given first by the Brahman to Vaivasvata, the luminus zone in Brahmanda called Vivasvana as well as Savita. Vaivasvata got flouted the current of Brahman to Manu or the (Manas) which enlightened the four inner faculties (Manas, Buddhi, Citta, and Aharhkara) called Antah karana by its Jaana and then Manas transferred the same to the Jana Caksu i.e. Prajfiana Caksu (Iksvaku) and later on to all the Jhanendriyas called Rajarsi (named after Rajoguna). Due to this reason they are all known as Raja Rsis (Gita. 4/1).

The mankind experienced during Sadhana this Supreme Being as Power in reality which is everlasting, immortal and infinite. As a matter of their enquisitiveness and intelligence they explored this Supreme Power but this Supreme Reality could not be defined in words because He happend to be beyond the reach of the body or the bodily organs hence He was also called as Incomprehensible. This Absolute Truth lies in its eternity in three-fold factors called Sat-Cit-Ananda. Sat is that which exists always and remains in one condition as kutastha, and is devoid of any change. Cit is that which possesses fountain of consciousness (Cetana) in it which is a part and parcel of this entity, and Ananda is the paradise which possesses the everlasting bliss, hence this Absolute Being is called as ‘Saccidananda’. The human beings have been worshipping Him since time immemorial in different ways, advancing gradually to its present form after pretty long time, having been developed and diversified into various disciplines. The processes and methods of worships have also been widely spread out in many dimensions as per apprehension and sanctified knowledge of devotees depending upon the capabilities of worshippers. Thus the ‘""Brahma-Vidya" emanating from Brahmans also Nitya and Anadi like the Brahman Himself, and for this reason no deadline can be drawn for its origin or it could be attributed to a particular sect, saint, seer, Rsi or Mahatma or to a particular period or point of time but on the other hand it is God gifted knowledge given by no other power than by the Brahman Himself, hence, this "Brahma Jnana" is also called as (Apauruseya) which has been developed gradually by the logical process of evolution with the grace of Paramaima, the Nitya Anadi Sadguru, existing at the highest rostrum of the universal field of vision. The first prayer hence to my apprehension must have started by the mankind as a matter of exploration by their own inspiration and enquiries, seeing the wonderful delights of the gorgeous creation in the conscious world as "Vivasvan" and "Savita’, the radiant or the shining part of the creation of God like the Sun, the Moon, the twinkling stars, the gigantic Sky, the sparkling planets, the enormous Earth, the five rudimentary forces (elements) and other felicity and raptures created by the I Imperishable Being.

I am really thankful to the readers and to their esteem in which they have responded to the first edition of the publication. One of the most important reasons for this appears to be the universality of this science coupled with the unrivalled nature of the esoteric part of human religion which was lying hidden in scriptures and various sacred books for several thousand years has now been exposed to the educated masses in English medium. This work is fundamentally based on practical knowledge of Saints acquired during Samadhi with perfect spiritual preponderance, besides the explicit contents and beautiful exposition, supported with various illustrations from Vedic texts and Santa sahityas.

This spiritual wisdom is the Science of Masters, Rsis, Saints and Prophets. They, after realization of the Supreme Power through the process expounded in the work, codified the Divine knowledge in "Deva bhasa" and in regional languages, hence only the limited people could take advantage of even its Bahyatattva Jana, and a few out of them would have succeeded in getting initiation in the Path. The present work will not only enrich the knowledge of the aspirants on spiritual grandeur but it will also give a ray of hope to the wandering souls, towards fulfillment of their Divine quest.

It is my humble request to the readers who are more prone to the scientific approach, real logic and sound reasoning, to the principles of Vihangama yoga, to begin with its regular practice in right earnestness, after getting initiations from Sadguru and enjoy the un- fathomable bliss, the intense wisdom, audible life stream, transcendent beauty treasure of spiritual truth, ocean of love and mercy, mysterious powers of God, and His infinite greateness and glory with enchanting music.

The new chapter on Jnana, Bhakti and Vairagya and the text of Mahopanisad added to this edition will prove Vihangama Yoga as a pure devotional cult. Its object is to have realisation of the Supreme Being, by Aparoksa Jiiana which can be attained if this science is practised under the guidance of Sadguru. Sadguru is the most benign and rare entity who comes across luckily to the fortunate people once in a blue moon, hence, one should without losing time awaken one’s own true self, reach running to him and learn the secrets of this science at his feet. 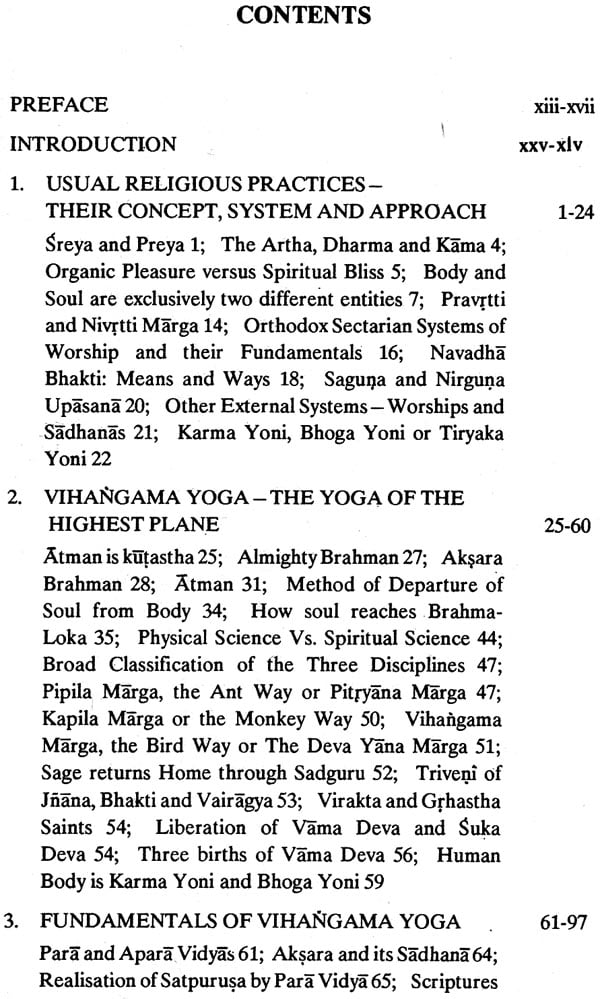 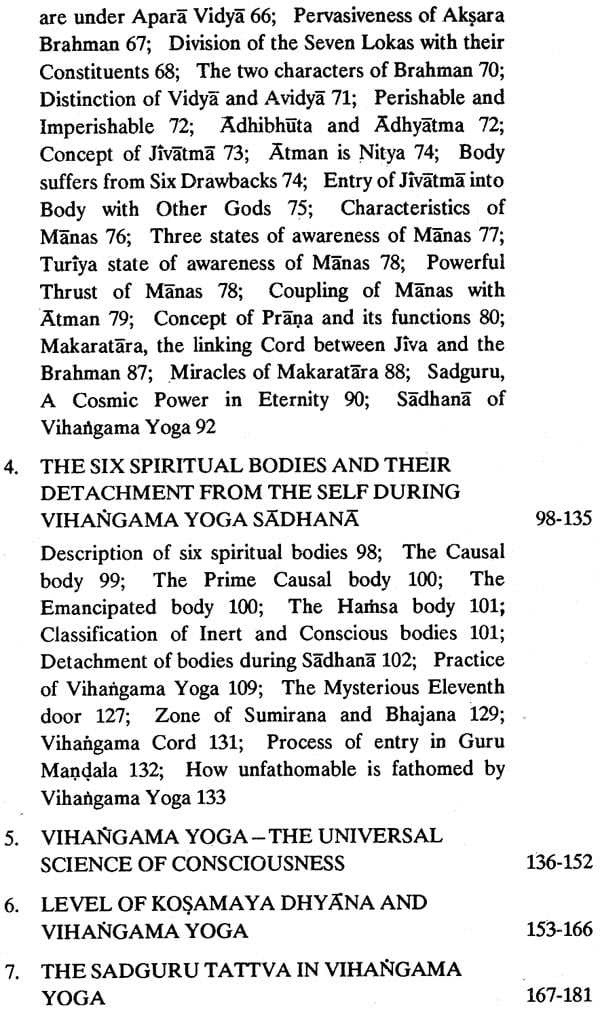 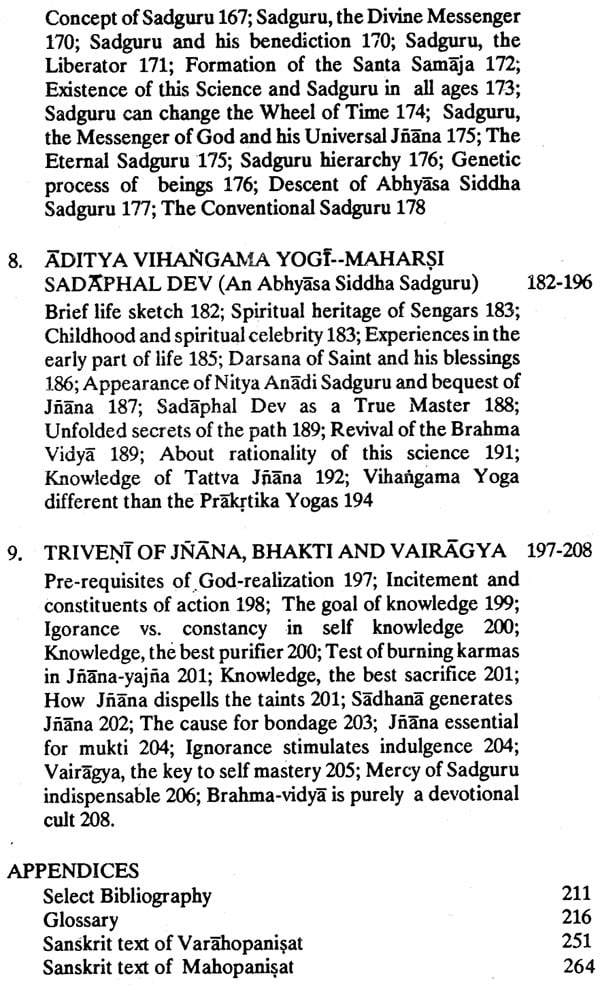 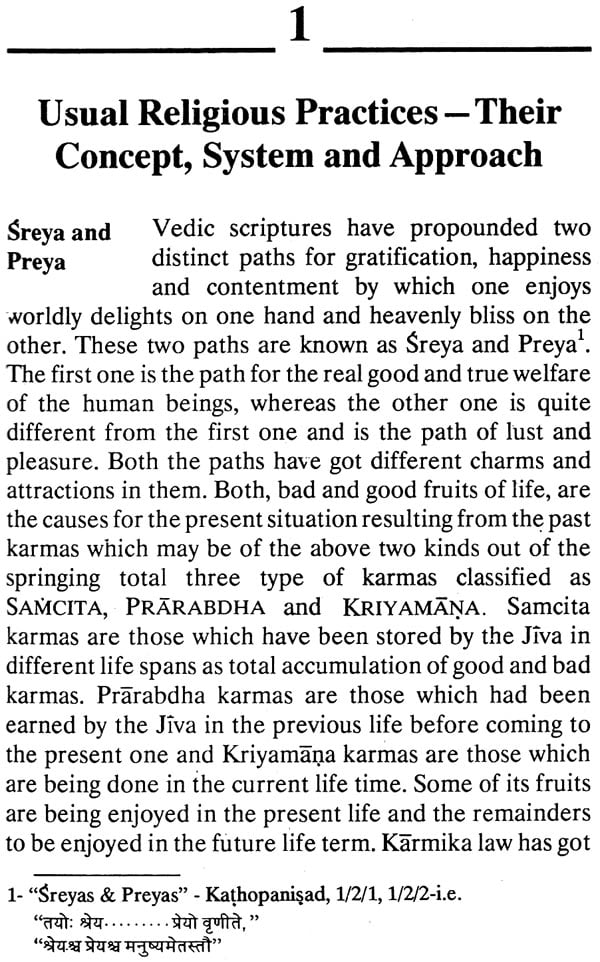 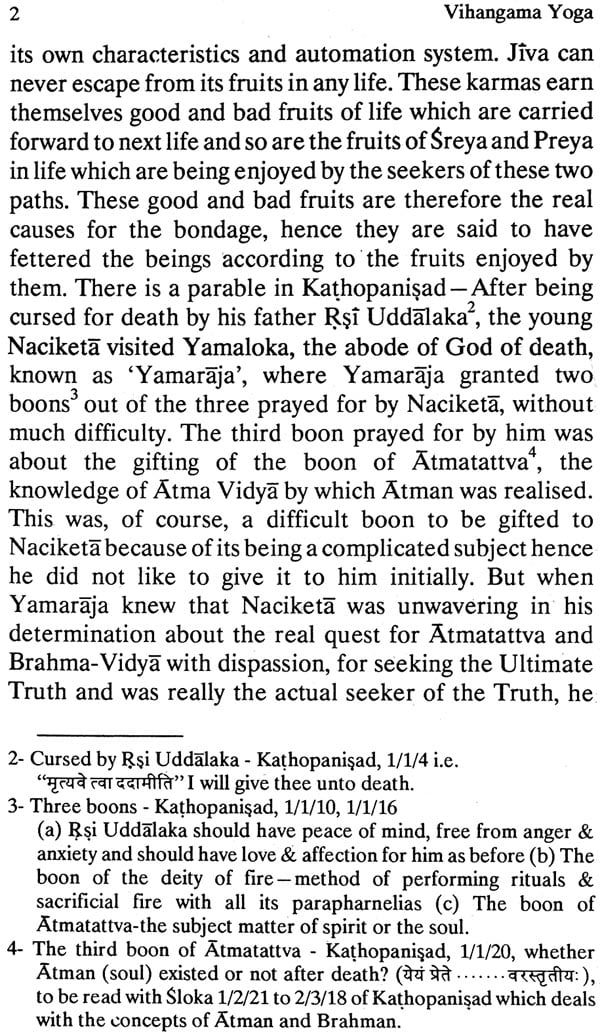 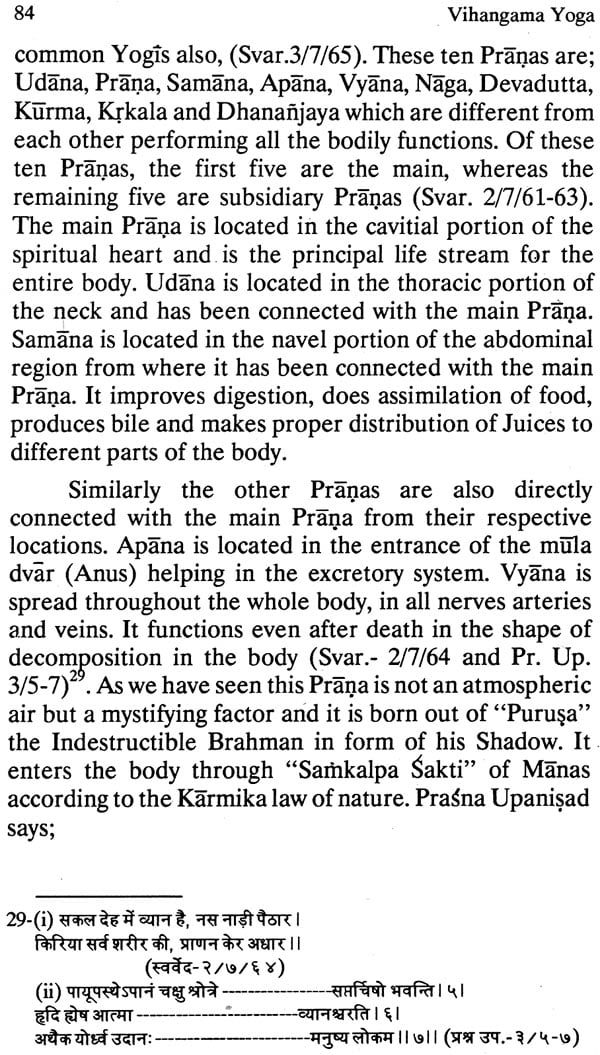 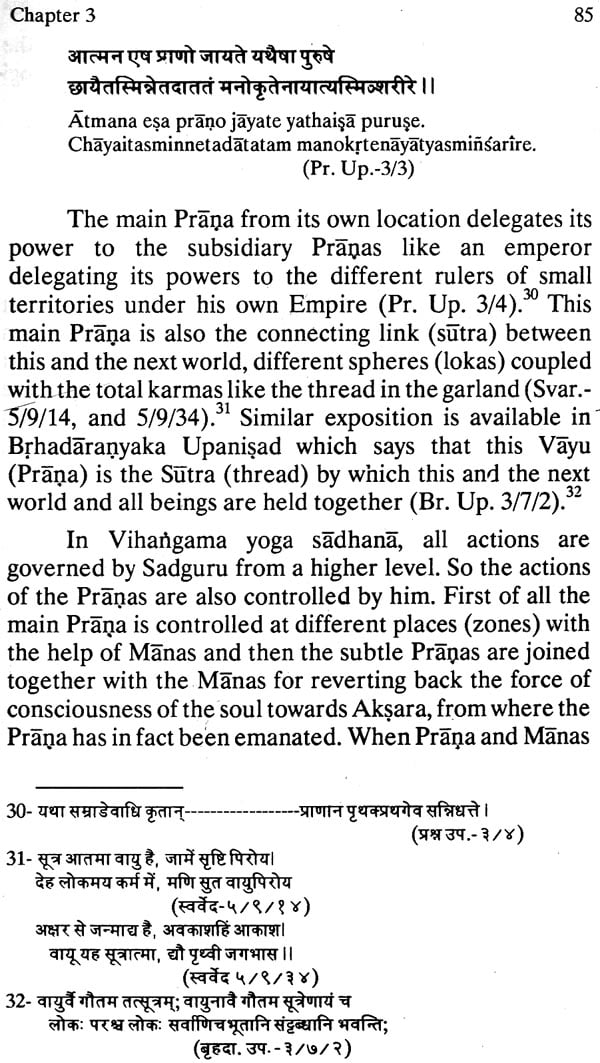 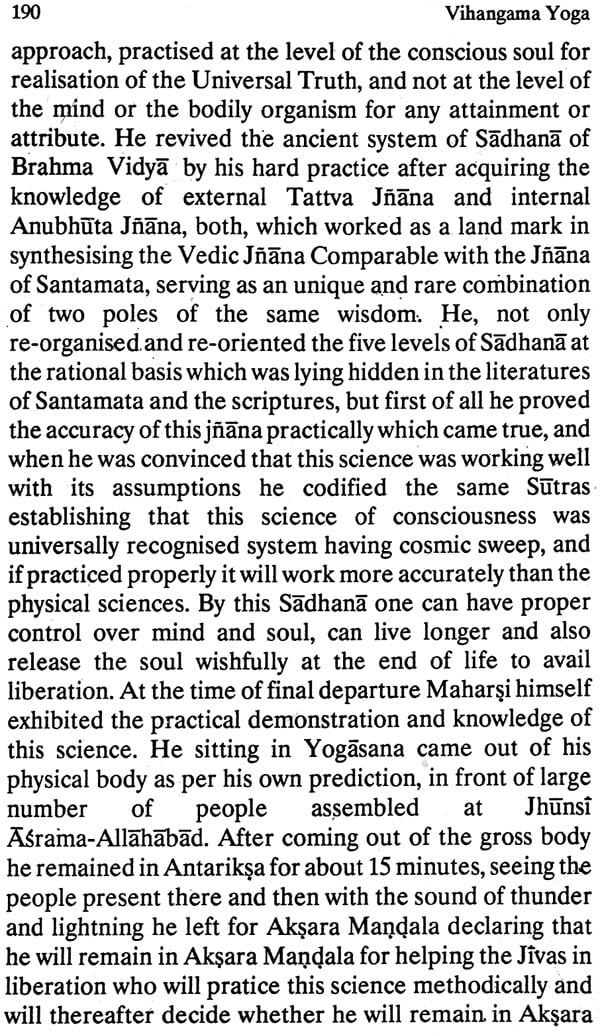 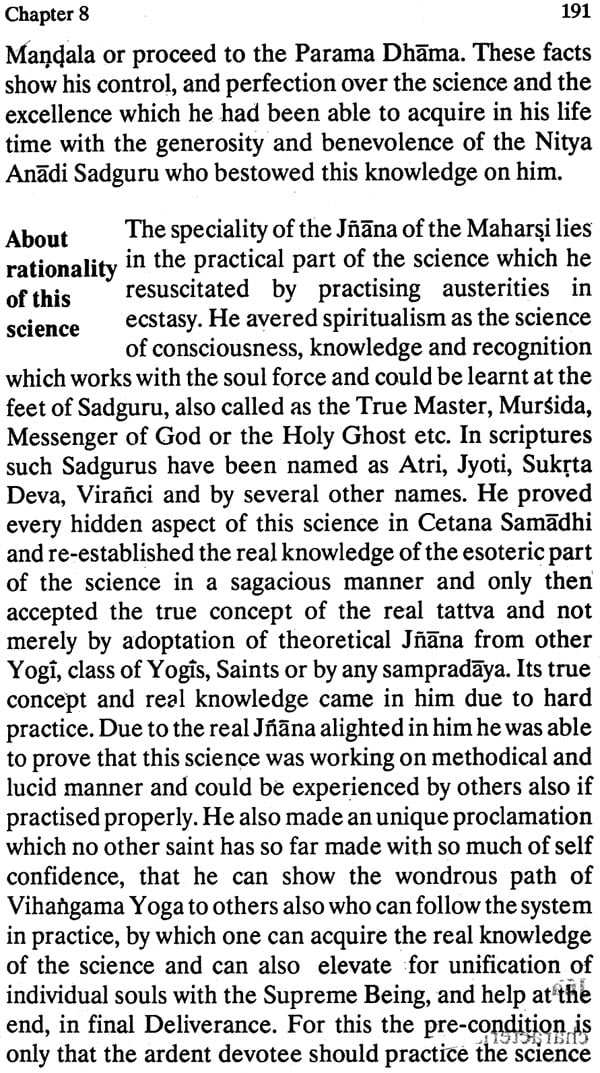 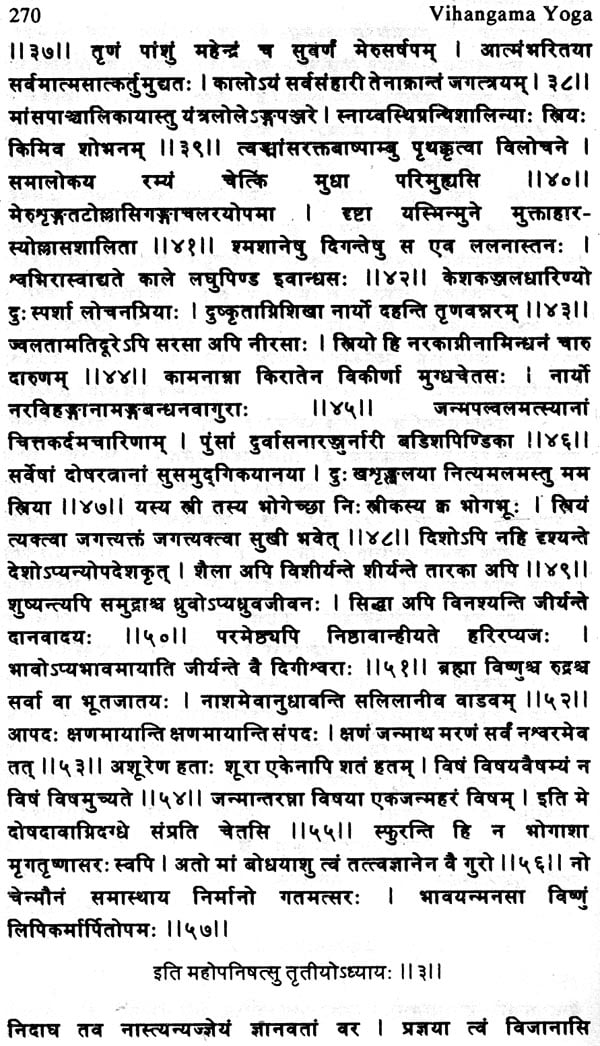 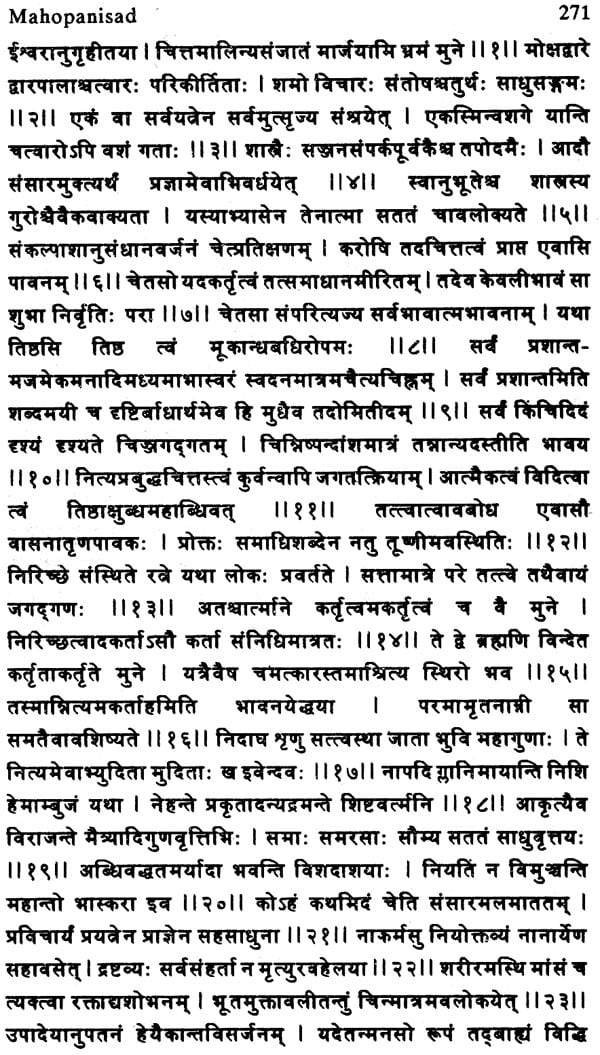 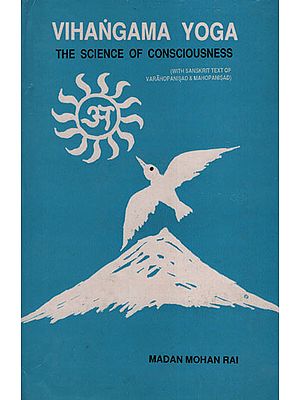