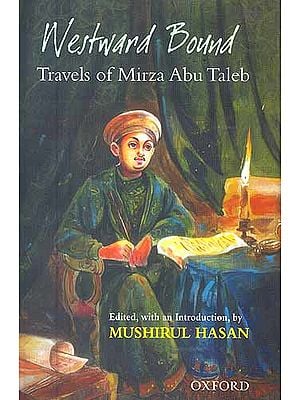 $33.50
Usually ships in 15 days
Notify me when this item is available
Save to Wishlist Send as E-card Share by Email
From the Jacket :

India's contact with the West grew with colonization as more and more people turned towards Europe with varying degrees of admiration, fear, and respect. Mirza Abu Taleb Khan, the erudite eighteenth-century scholar from Lucknow (1752-1806) was one of the first among his community to have made the journey to the West.

Compelled by political intrigue and other adverse circumstances at home, Abu Taleb set sail from Calcutta in 1799, reaching England after a difficult journey on the high seas. Greatly impressed by the governmental, economic, and artistic achievements of late eighteenth-century England, he also recorded his impressions of what he saw and experienced in France, Genoa, Malta, Turkey, and Baghdad. After traveling far and wide for four-and-a-half years, he returned home, via Bombay, in 1803.

Abu Taleb's travelogue, a singularly important work, sheds light on the national customs and manners of Europeans, often corroborating the evidence offered by present-day social historians. His vision and understanding of cultural streams in the East and West add credibility to his writing. His observations also help to provide an alternative viewpoint on the encounter between Pax Brittanica and the sharif families of North India.

At a time when there is much talk of developing a wider and more truthful vision of the West, Travels of Mirza Abu Taleb illustrates a non-Western representation of the West, thereby enhancing its contemporary relevance.

Abu Taleb's chef d'oeuvre is his Masir-I-Talibi fi Bilad-I Afrang. The Persian original was edited and published by his son, Mirza Husain Ali, in 1812. An English translation of the work by Charles Stewart, under the title The Travels of Mirza Abu Taleb Khan in Asia, Africa and Europe during the years 1799, 1800, 1801, 1802 and 1803, was published in 1810.

This new edition is enriched by an introduction and annotations by Mushirul Hasan who has introduced and edited a number of other printed texts, including My Life: A Fragment by Mohamed Ali; Inside India by Halide Edib; Zaka Ullah of Delhi by C.F. Andrews(with Margrit Pernau); and Regionalizing Panlslamism: Documents on the Khilafat Movement (with Margrit Pernau).

'The first time the genuine opinions of an Asiatic, respecting the institutions of Europe, have appeared in the English language.'

'From my first setting out on this journey, till my arrival in England I ascended the pinnacle of magnificence and luxury; the several degrees or stages of which were Calcutta, the Cape, Cork, Dublin and London: the beauty and grandeur of each city effacing that of the former. On my return towards India everything was reversed, the last place being always inferior to that I had quitted. Thus, after a long residence in London, Paris appeared to me much inferior.

I may perhaps be accused of personal vanity by saying that my society was courted, and that my wit and repartees, with some impromptu applications of Oriental poetry, were the subject of conversation in the politest circles.

Like the Arab tribes, they [the English] forsake the cities during the summer season, and seek, in the fresh and wholesome air of the country, a supply of health and vigour for the ensuring winter.

In short, the English carry their passion for mechanics to such an extent, that machinery is introduced into their kitchens and a very complete engine is used even to roast a chicken.'