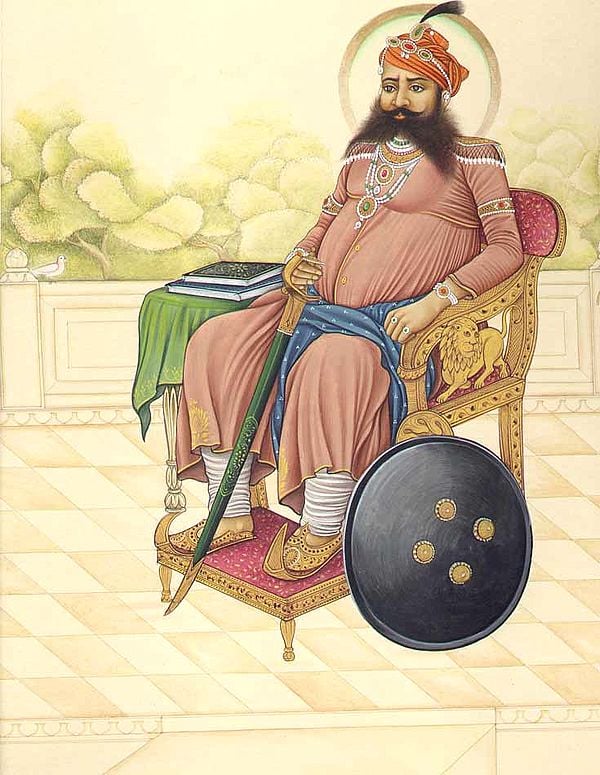 $125.00
Notify me when this item is available
Save to Wishlist Send as E-card Share by Email
Portraiture was one aspect of the general humanistic interest and the insatiable curiosity which resulted in paintings that present both the human and physical worlds with a veracity and an empathy.

This portrait of a Deccan monarch, with a halo around his head, belongs to Bijapur. The conventional pose adopted by the sitter, along with the dress that clings to his round contours, are mannerisms that frequently occur in works from Ahmadnagar and Bijapur. He wears a loose jama and a pajama with a patka loosely wrapped around his waist. His turban is a mass of oval swirls with an ornate sarpech and a plume. He is seated on a heavily carved chair with feet resting on a foot stool. The chair has a lion, which in all probabilities is the insignia of the state. Close to him is a table, covered with a cloth, holding two hardbound books, evidence of his literary tastes. He holds his long sword and the shied rests next to the chair.

A bushy beard and a moustache cover the lower part of his face. The figure has the titanic proportions of the Bijapur/Ahmadnagar style, together with typical features of puckered lips and cat-like eyes. The artist brilliantly evokes the strength of will of the monarch through his massive body and grim expression.

Inclusion of trees in the background are evidence of Deccani influence known for its often conspicuous and unrealistic foliage. The birds and a graceful peacock are part of relatively fanciful decorative touches that lend so much charm and beauty to Deccan paintings, making them more poetic than Mughal art.