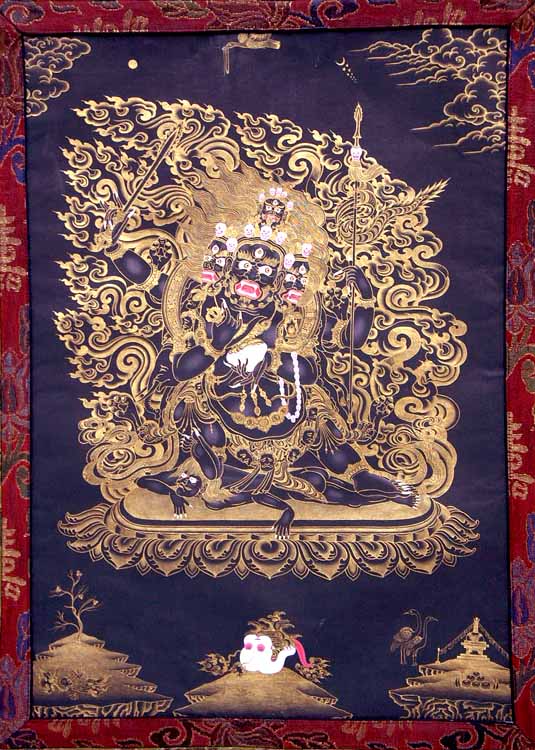 $255.00
Notify me when this item is available
Save to Wishlist Send as E-card Share by Email
The painting is a beautiful Tibetan black thangka with fine gold lines. Such paintings are utilized especially for depicting wrathful deities and exude great mystery. The images themselves, though very expressive and powerful, are extremely delicate and well drawn.

Mahakala is the wrathful manifestation of Avalokiteshvara, the bodhisattva of compassion. He is one of the main deities of Tibetan Buddhism, and is considered both a meditational deity, or yidam, and a protector deity. Following his practise would result in reaching two goals: the excellent goal, meaning that the practitioner becomes a Buddha; and the common goal, meaning that Mahakala would remove obstacles, grant knowledge and fulfil wishes.

He is shown here with four wrathful heads, each of which has a third eye. His fierce open mouths bare his awesome fangs. Each of his head is surmounted by a five-skull crown. His crown of five skulls represents the five main afflictions of anger, greed, pride, envy, and ignorance and their corresponding transformation into positive virtues. His hair stands upright behind the crown, flame-shaped. He is surrounded by a flame like golden aureole. This billowing mass of flames that surrounds wrathful deities is described as a 'blaze of awareness fire'. The energy of the wisdom of these wrathful forms blazes like the sun's inexhaustible fire. The sun, as a symbol of pure wisdom, is consumed with fire, yet is not itself consumed. Its eternal fire is inexhaustible. The wrath of these deities is not ordinary anger, but wisdom-anger manifesting in its most indestructible or vajra nature, carrying the capacity of terrifying all evil spirits.

The twisting and blazing fiery aureole surrounding Mahakala is also described as kalagni, meaning the 'fire of time'. Literally it is the 'fire at the end of time', according to Buddhist ideals, the ultimate conflagration of the universe at the end of this aeon.

The aureole flames are drawn with much grace and expression of movement, the flames curl to one side and leap out at the other. This transverse movement of the flames enhances the dynamic body posture of Mahakala, full of vitality and movement.

His eyebrows too are like small flames, and his beard is made of golden hook like shapes.

He wears many ornaments on his body, and a necklace of fifty freshly severed human heads. A tiger skin is around his loins and he tramples upon a human figure, denoting obstacles.