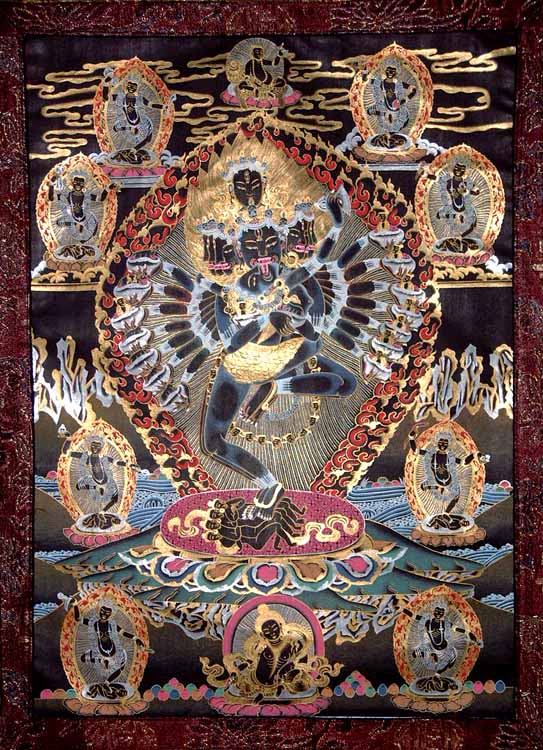 $295.00
Notify me when this item is available
Save to Wishlist Send as E-card Share by Email
The tutelary god Hevajra is described, with all the rites and ceremonies used in his worship, in the sutra of the Hevajra tantra, which figured historically in the conversion of the Mongolian emperor Khubilai in the thirteenth century A.D.

Hevajra is represented with eight heads, sixteen arms, and four legs. There are three heads on either side of the central head, which is larger than the rest, and all have the third eye. Above the central head is another head.

All of his sixteen hands hold skull cups. In those at the right are six figures of animals: an elephant, a horse, a mule, a bull, a camel, a man, a deer, and a cat. In the skull cups held by the left hand are the following personages:

8. Prithvi: The Goddess of Earth.

Two of Hevajra's legs step to the right on human beings, while the two legs at the back are in a dancing position.

He is represented here in a yab yum position. The shakti, who encircles his body with her legs, holds a chopper (Tib. gri grug) in her outstretched right arm, while the left is around the neck of the god. Both Hevajra and his consort wear various ornaments and skull crowns. Both the deities wear a long garland of skulls.