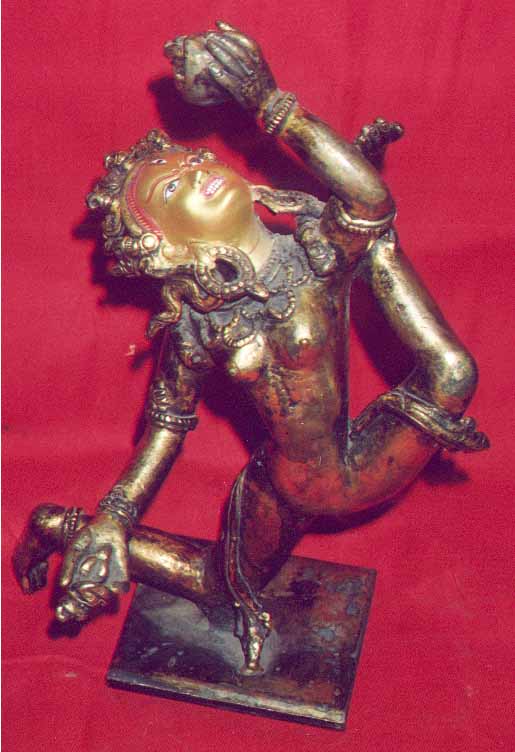 $215.00
Notify me when this item is available
Save to Wishlist Send as E-card Share by Email
This image is of the dakini Vajrayogini in her form as Naro Khajoma. A dakini is the most important female principle, representing the ever-changing flow of female energy. In Tantric Buddhism, dakinis are the guardians of teachings and are considered the supreme embodiment of wisdom. The dakini can help change human weaknesses into wisdom and understanding, or the concept of self into enlightened energy.

There are two kinds of dakinis-supramundane, or "beyond-wordly," ones and mundane, or "worldly," ones usually referred to as yoginis in real life. Dakinis or yoginis are often mystical partners of yogis, to whom they give secret wisdom and magical powers. The practitioner strives to reach Buddhahood through the help of his lama, or teacher; his yidam, or meditational deity; and his dakini.

Here Vajrayogini is shown with three eyes and in her typical dancing posture; she is half standing on her knee on a plain platform and her left leg is stretched out touching her left arm. Her right hand holds a vajra chopper, while her left hand holds a skull cup. The function of the chopper is to make 'mincemeat' of the hearts, intestines, lungs, and life-veins of enemies hostile to the Dharma. A similar crescent-shaped cleaver is used in oriental cuisine to chop meat and dice vegetables.

The skull-cup (Skt. Kapala; Tib. Thod phur)  fashioned from the oval upper section of the human cranium - serves as a libation vessel for a vast number of Vajrayana deities, particularly wrathful ones. In her form as Naro Khajoma, Vajrayogini is depicted pouring blood and human brains from an upraised skull-cup into her mouth, signifying that she consumes great bliss.

The skull-cup of blood (Skt. Rakta purna; Tib. Thod khrag) is usually depicted as a 'swirling-offering', with the blood forming waves and crests like turbulent water or boiling liquid, as shown in this image. This symbolizes the 'blazing and dripping' of the red bodhichitta as 'inner heat', since a liquid offering of blood or nectar is said to boil in the presence of a wrathful deity, yidam or goddess.

This description by Dr. Shailendra Kumar Verma, Ph.D. His doctorate thesis being on the "Emergence and Evolution of the Buddha Image (from its inception to 8th century A.D). 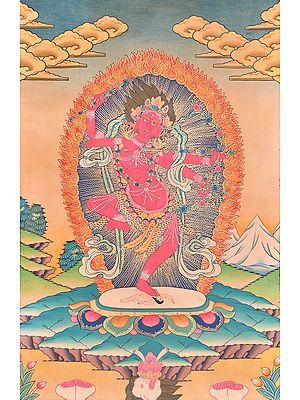