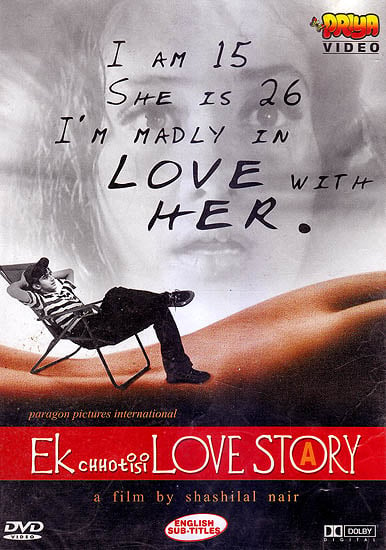 Ek Chhoti Si Love story is the tale of a teenager Aditya (Aditya Seal) who lives in a housing society and has taken to spying on a young lady (Manisha Koirala) Living in a flat opposite his with the aid of telescope. The voyeurism slowly turns into infatuation and the infatuation into puppy love. Aditya spends his whole time observing the lady. She does nothing to stop him or atleast to avoid him watching extremely intimate moves.

The young boy’s voyeurism does not at all evoke either sympathy or anger from his viewers. The story though is commendable the characterization does not stand tall.

The movie is a trial to sell voyeurism commercially and does not deal ethically with the problem neither suggests a solution. The director tries saying nothing and has made a socially irresponsible movie where are being portrayed as objects of desire.

With Manish’s double Jessica publicly de-grading lady audience at the movie contemplates every scene and wonders who is it, Manisha or her double.

The narration is far too insipid, Nair has nothing to say through his film the cinematography is by Muralidharan C.K. the art direction by R. Verman background by Arvind Nirmal and costumes by Ashley Rebello. Without the hype and hoopla and the intervening of the law order and government the movie wouldn’t have even stood for a day on it’s own. Some selling techniques these…