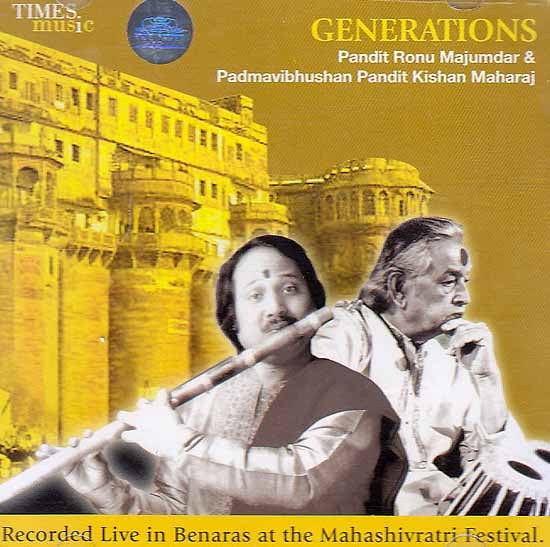 Generations: Recorded Live in Benaras at the Mahashivaratri Festival

One of the finest Tabla Players of our time Padmashree Pandit Kishan Maharaj was born on the auspicious day of Sri Krishna Janamashtami in the year 1923 in the holy city of Varanasi. His tutelage began under the guidance of his father Pandit Hari Maharaj. However due to his untimely death his training was taken over by his uncle Pt. Kanthe Maharaj, Pt. Kanthe Maharaj was one of the great old masters and himself a disciple of Pt. Baldeo Sahai whose grandfather was the founder of the Benaras Gharana. His musical journey began when he started accompanying some principal artistes of the day even at the tender age of eleven. Throughout his career he has displayed immense versatility by playing any kind of accompaniment be it with the sitar, Sarod Dhrupad Dhamar or Dance. He has accompanied legends like Pt. Ravi Shankar Ustar Ali Akbar Khan Ustad Vilayat Khan, Sitaradevi and Birju Maharaj. His Tala vadya Kacheri with the Mridangam Vidwan, Palghat Raghu is simply incomparable. Today Pt. Kishan Maharaj is one of the Most respected Tabla players mostly due to ability to captivate the audience interest by playing cross rhythms and producing complex calculations particularly in the tihai patterns. He has created his own distinctive style which the Tabla world follows.

His artistic Climb is marked with incredibly brilliant performances in world’s prestigious venues such as the Kremlin, Moscow, the Palais de Beaux Arts Brussels and so on. His compositions around the New Age genre of music have also earned him a firm grounding in the field of contemporary music.

His performances are characterized by complex renditions delivered with ease hence he is one of the most popular flautists across the globe. His phenomenally successful concerts earned him one of the most significant wards of his life the Aditya Vikram Birla Award for the Year 1999. He has also been honoured with the lifetime achievement award by Sahara India Pariwar on occasion of Jyoti Diwas 2001. Today he continues to enthrall his audience with his powerhouse performances.