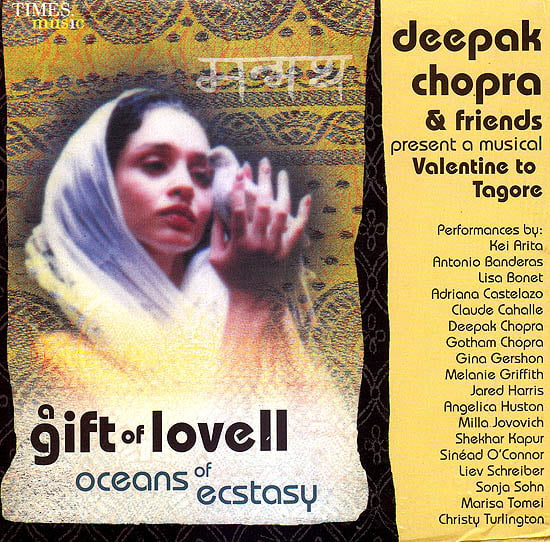 I would life to share with the listener the exact process that went into the creation of these ponents. I read a number of traditions of Tagore’s work including his won original translation from Bengali to English I then asked myself how these beautiful sentiments of see. Sometimes I have added to new interpretation, introduced rhyme and mater or substituted metaphors that are more meaningful to our lives today. At other times I inserted an original phrase or two I also consulted my Bengali friends so they could reassure portrayed the worldview of one of our most profound wisdom transitions the Vedic philosophy that spawned the consciousness and genius of tagore.

Purists may be offended by my taking these liberties with a literary glant like Tagore. However my intentions came from a place of innocence and a strong desire to make people aware that Tagore is as relevant today as he was in Edwardian times.

Listening to these sentiments of Tagore is like eavesdropping an a citizen of the cosmos. However he did came from a definite time and place. Born in Bengal in 1861. Rabindranath Tagore astonished the literary world when he published a little book called Gitanjali in 1912- it is still his best known work. Several of the poems gathered here are inspired by this body of verse. He was the first Asian to win the Nobel Prize for literature which happened quickly in 1913. He also painted lectured and founded and founded schools and a university showered with praise and fame he became a saint in his hamaleand and wandered the world to great acclaim until his dealt in 1941.

These are the bare facts of a great life. Yet the cosmic dimension of Tagore’s mind and heart are what capture our attention in these verses. His voice is often humble he calls himself a hollow reed carried over hill and date and god is the flutist playing endless songs through him. But this humble instrument seems to know god personally. He is intimate with the reality of love as a spiritual force. To be so deeply religious and yet to give voice to the everyday feelings.

The first time listener of these poems will be fascinated by their emotion and their music. Above all that is what I have tried to convey in these new translations. Same are very free interpretations but I have tried always to maintain the same of his logic, it is never ordinary logic for Tagore was also a spiritual teacher whose view of the world turns our everyday perspective upside down. He saw the soul as much more real than any material object and because of his complete confidence in spiritual reality, he sang of love as a joyful voyage in the land of the spirit.

Those who met tagore in his eighty years described him at one of the great souls of our age. Einstein considered him a age from what we learn in these poems he certainly lived his own words. He kissed the infinite he was not afraid to lose everything for love. In these poems he allows us to experience love with words and music that wash our souls.

The world speaks to me in colors my soul answers in music.

A gift of love II oceans of ecstasy a musical valentine to Tagore is the seductive follow up to the best selling A Gift of love featuring madoma Rosa Parks, Demi Moore, Goldie hawn, jared harifs and martin sheen amongst others.

Acclaimed mind body and spirit leader Deepak Chopra M.D. Shares with us his deep for the great Indian Mystic and Nobel Prize Laureate. Rabindranath Tagore (1861-1941) who is considered a Saint and Reformer in India. Composer and producer Adam Plack’s sensual grooves are laced with Passion soaked exotic vocals and chants Balearic beats and intoxicating rhythms that have resulted in a dreamy. Jasmine infused soundtrack to Deepak Chopra’s Luminous translations of Tagore’s verse.