Grapes: A Hilarious Film Based on Sakespeare's "Comedy of Errors" (Hindi Film DVD with English Subtitles) (Angoor) - One of the Bestselling Videos of All Times 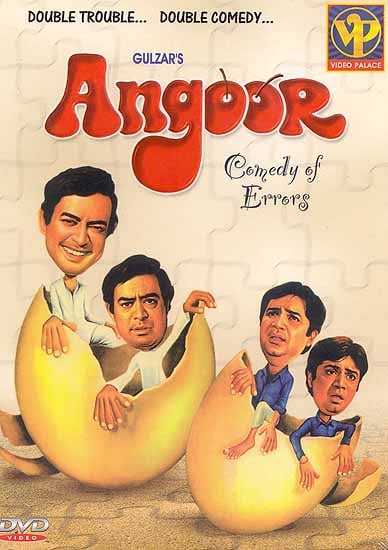 The film is adapted from the famous novel comedy of errors by Willam Shakespeare. This laugh a minuted riots entertainer is about not one but two pairs of twins. One pair of master (Sanjeev Kumar) and the other of servant (Devan Verma).

At some point of time one master meets the other twin’s servant and mistakes him to be his own servant. At mother point of time the wife of the twin brother takes her brother-in-law to be her husband, one is mistaken for the other in this film of mistaken identities and this leads to a spate of events.

The timing the punches and the comedy created by this Jodi. 1 of Sanjeev Kumar and Devan Verma had made this film a box office hit.

In this Gulzar’s directed film of double trouble, double comedy, Sanjeev Kumar has done a splendid job for which he was nominated as best actor for Filmfare Awards. Devan Verma is just too brilliant in the role of servant. His sense of timing and performance got him the best comedian Filmfare Award.