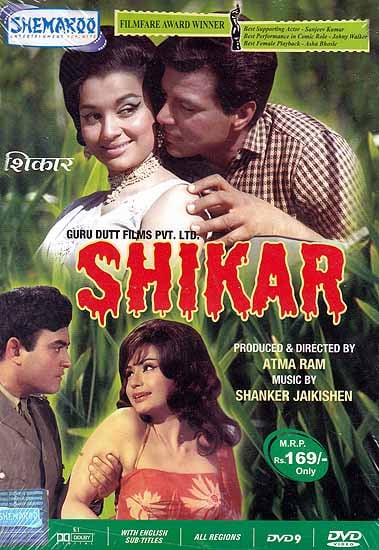 $17.50
Ships in 1-3 days
Notify me when this item is available
Save to Wishlist Send as E-card Share by Email
From the CD :

Ajay Singh (Dharmendra), the manager of a private forest, with his friend Naresh track down and kill a man eating tiger. That same night the rescues an unconscious girl, the victim of an accident. On his way to get medical assistance he discovers his friend’s house broken into and his friend, dead, lying sprawled on the living room carpet. When he returns with inspector Rai (Sanjeev Kumar), the clues point to a woman being involved in the crime, and the young girl, the victim of the accident has disappeared with the jeep. Who could be the killer? Kiran (Asha Parekh), the girl involved in the accident? Ex Police Commissioner Sharma, who seems to be taking an unseemly interest in the investigation? Veera (Helen), Naresh’s secretary? Or a group of young men, who had come for a hunt in the forest? The jungle provides a picturesque backdrop to the unfolding suspense that ends in a thrilling climax.